The Long Beach City Council could clear the way for more cannabis dispensaries to open up across the city if it approves a recommendation from city staff to create eight new licenses for equity applicants who could be approved for operations as early as next fall.

A feasibility report requested by the council in March was published by the city Friday and showed that the city could support additional dispensaries, but doing so might require some changes to city zoning, its municipal code and the cannabis tax structure, the report said.

Equity owners are those who have lower net worths, live in underserved parts of Long Beach or have prior criminal records tied to cannabis. There are currently no dispensaries operated by equity owners in the city.

“If not now, when?” Councilman Al Austin, who requested the report, said in March. “Equity delayed is equity denied.”

The report said that the city could support eight new dispensary licenses that would be set aside for equity applicants despite respondents to a city survey showing support for about 34 additional licenses.

To alleviate some of the concerns of equity applicants who have said that finding a suitable location in the city’s “Green Zone’, the areas where dispensaries are allowed to operate, is time consuming and expensive, the city manager’s office is recommending changes to the buffers that dictate how far away from schools, parks and other locations a dispensary must be.

Long Beach buffers were largely set by the 2016 Measure MM ballot initiative that legalized medical cannabis sales and instituted buffers from schools, beaches and other dispensaries (1,000 feet) as well as parks, daycares and libraries (600 feet).

A recommendation in the report calls for increasing the “Green Zone” by reducing the school buffer to 600 feet, which is the distance required by state law, and eliminating the buffers for parks and beaches unless they have a playground.

“Without an expanded Green Zone, it is possible some equity applicants will find no viable properties to conduct their cannabis business, or they will experience significant delays due to the extended search for a viable property,” the report said. 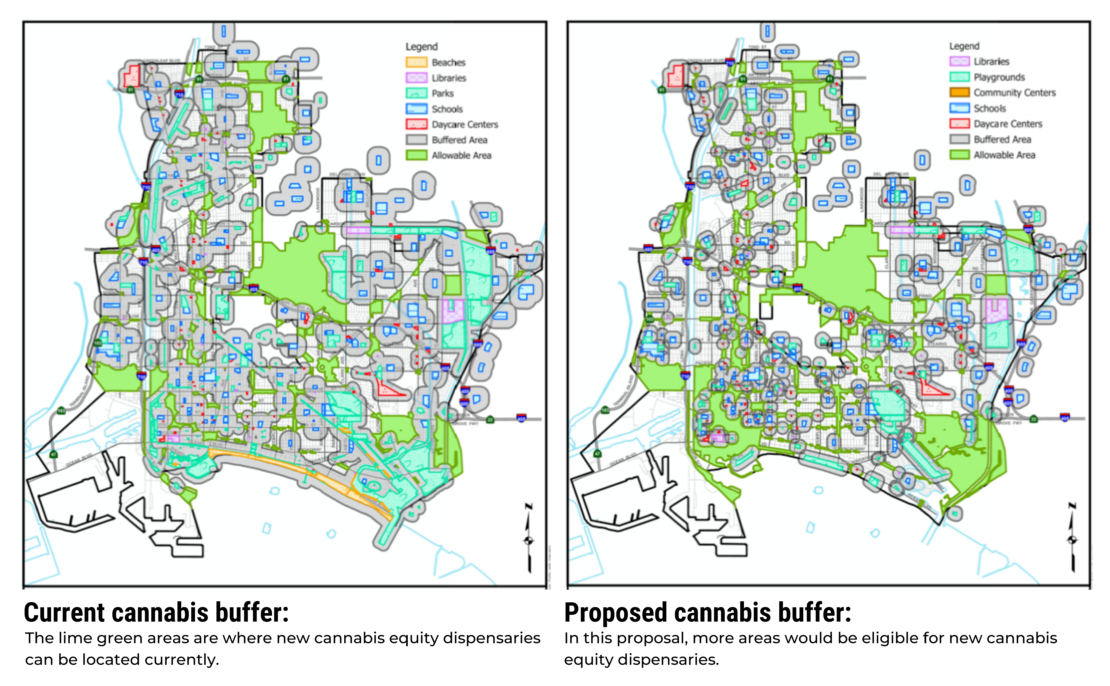 The most pronounced changes could occur in Downtown, Southeast Long Beach and some commercial corridors in Central Long Beach, according to city buffer maps.

Those changes could open up over 6,600 potential parcels for equity applicants to locate their dispensaries.

While the city used a lottery system to award some of its initial licenses, the equity process might not rely on just ping-pong balls.

The report is recommending a hybrid approach that would use a merit-based approach to analyze applications, including determining whether a business operator is likely to be successful, how they’ve been impacted by the war on drugs and their connection to the city.

Other cities have used panels of volunteers and industry experts from outside the city to sort through applications. Long Beach’s model would take applications vetted through this process and enter them into a lottery if there are more than eight applicants.

The timeline of hiring a consultant and determining how applications would be scrutinized to actually awarding licenses could take about year. The report said that business operators could be awarded licenses as soon as November 2022.

Expanding the city’s equity program is projected to cost several hundred thousand dollars and the report suggested raising the cannabis tax rate by .25%, something the city projects could generate another $609,000 in revenue.

The city’s cannabis businesses generated over $9 million in tax revenue over the last fiscal year, according to city estimates.

Long Beach has an equity program in place that offers up to $235,000 in grant funding to help equity applicants start up their businesses. An additional $220,000 in grant funding is also available through the state’s Bureau of Cannabis Control. Industry experts and city officials have estimated that opening a dispensary can cost about $1 million in start up costs.

One of the concerns raised by applicants, politicians and city officials alike is the prospect of additional licenses drawing in predatory business partners that could use people who qualify as an equity applicant as a straw man partner, or wrest control of the licenses from them after the dispensary is opened.  The report also calls for the City Council to amend the city’s municipal code to add protections for equity cannabis owners. The municipal code currently stipulates that they must be the majority owner but doesn’t require anything past that.