Over half the streets in Long Beach have less than 12 years remaining in their expected lifetime, and to avoid costly reconstruction in the future, the City Council could issue bonds to speed up repairs, with future revenue from the Measure A sales tax pledged to repay the debt.

Measure A, which increased local sales taxes by 1 percentage point, has generated about $60 million annually for the city. Issuing bonds against future revenue from that tax would give the city earlier access to about $150 million in funding to address deteriorating roads, public buildings and other city infrastructure. Because the bonds would not levy a new tax—just borrow against an existing one—the City Council could approve the maneuver without approval from voters.

City officials believe that by investing funds sooner into city streets and other assets they will be able to save money in the long run by addressing them before they fall into further disrepair.

While full details about the plan have yet to be released, Joy Contreras, a spokesperson for the Public Works Department, said in an email that the department is likely to propose $150 million in bonds that would be issued over the city’s next five-year infrastructure plan, which is expected to be revealed when the city’s budget proposal is made public in the coming weeks.

Contreras said details are expected to be released on Aug. 2, the same day that the City Council is expected to hold its first budget hearing of the year.

Measure A was approved by voters in 2016 to fund infrastructure and public safety investment, but a city memo published last week shows the condition of local roadways has continued to decline since then. The average pavement condition index score—which measures the quality of a roadway—is now 58 out of 100, four points lower than it was in 2017.

The memo says 53% of Long Beach streets are rated at 60 or below and 26% are rated at 40 or below, meaning they will require more intensive work and possibly a full reconstruction. It costs much more to fix an already deteriorated road compared to a well-maintained one, sometimes as much as 800% more, according to the memo’s author, Public Works Director Eric Lopez.

Lopez said that the city needs to spend about $81 million annually over the next five years to bring the city’s average pavement score up to 60. 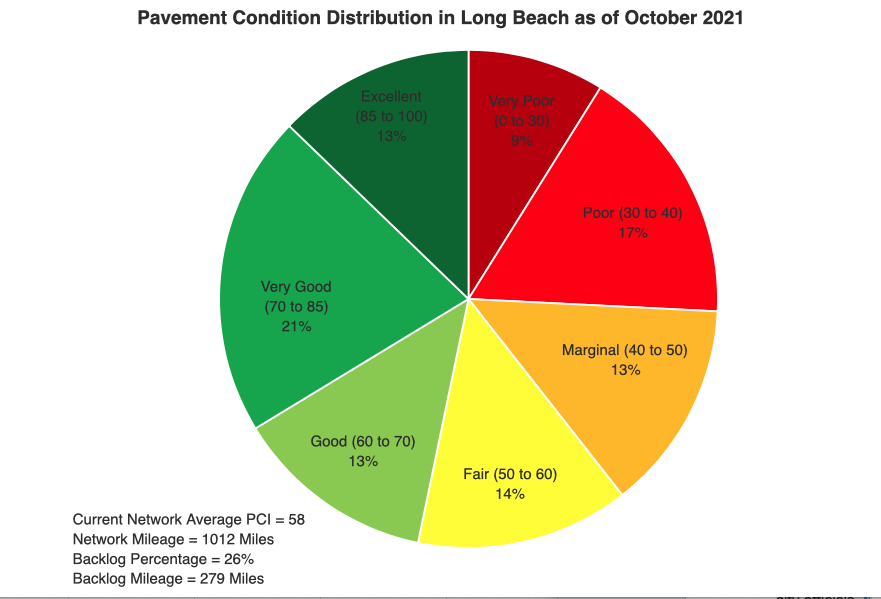 A chart from the city’s website where residents can look up their street to find out its Pavement Condition Index score. The citywide average score is 58.

That’s considerably more than the $32 million per year Long Beach has been spending to fix local streets and alleys. Recently, less and less of that has come from Measure A, with the city instead relying on state and county taxes to pay for local street improvements.

Even if it spent $81 million a year, it could take decades for the city to fix its streets. Lopez said last year that the total cost for needed street repairs across the city was $1.77 billion. That investment would bring the city’s average pavement score to 85. Just 13% of city streets currently have that designation.

In the 2017 fiscal year, the first year that Measure A was active, the city dedicated $18.22 million in Measure A funds to fixing city streets. But since then, the share of Measure A revenue flowing to streets and alleys has diminished while the amount flowing to police and fire services has increased, according to city data.

The current year’s budget projected over $75 million in Measure A spending, but just $1.5 million was allocated to streets and alleys. The city’s police and fire departments were budgeted to receive over $63 million in the current year for personnel and infrastructure costs.

Out of the over $357 million generated by Measure A between 2016 and 2022, Long Beach has put about $52 million toward street and alley repairs. The city’s police and fire departments were budgeted to receive over $210 million from Measure A during that same period. The remaining funds have gone toward improving city parks, buildings and other infrastructure projects.

Measure A was proposed as a general tax, which gave it a lower threshold for approval (50% plus one) and the use of its funds is guided by the City Council through a non-binding resolution that currently directs funding toward police and fire personnel and city infrastructure like streets.

Issuing bonds and using Measure A to pay for them is not a new idea. The City Council first requested the city look into it to speed up street repairs in November 2020. Councilmember Stacy Mungo Flanigan, who led the initiative, said that the city had polled residents on issuing bonds through a ballot measure but it did not perform well.

Mungo Flanigan is optimistic that the bonds will be issued and badly needed street repairs across the city could be accelerated.

“I’m happy that it’s getting done,” Mungo Flanigan said. “I wish the city was capable of doing more.”

The bonds being approved is not a certainty. When the council last discussed issuing bonds to fix streets and alleys in September, city management warned that diverting Measure A money to pay for debt service on bonds could require the council to make cuts elsewhere, including from police and fire funding.

There’s also the issue that the city’s share of Measure A is scheduled to start declining over the next five years so the city can pay into the countywide homeless services tax, something Long Beach has been able to avoid previously because it had already reached the cap on local sales taxes.

Long Beach is expecting to get as little as $38 million in Measure A revenue next year, down from $60 million in prior years.

From pension costs to tree watering, here’s what this year’s budget will not fully fund