Long Beach Mayor Robert Garcia will be one of 17 “rising stars” to give the keynote address, Tuesday, during the Democratic National Convention.

Tuesday’s theme will be “Leadership Matters” and that leadership will lean decidedly young. Stacey Abrams, a recent gubernatorial candidate from Georgia, will be the oldest keynote speaker at age 46. Garcia is 42.

“I’m excited to join some amazing Americans to talk about the future of our country and electing Joe Biden as President,” Garcia said in a statement. “We need to move our country forward and it’s going to take young people to mobilize across the country to fight for healthcare, racial justice and civil rights for all.”

It is unusual to have multiple speakers give the keynote, which is usually reserved for an individual the party has identified as a potential national figure. For example, each of the last two Democrats to win the White House gave keynote addresses: Bill Clinton in 1988 and Barack Obama in 2004.

Garcia’s selection comes in the midst of a tumultuous few weeks that included him losing both his mother and stepfather to COVID-19, saw Sen. Kamala Harris, who he originally endorsed for president, being selected by Democratic presidential nominee Joe Biden as his running mate and, now, being selected for a keynote spot. 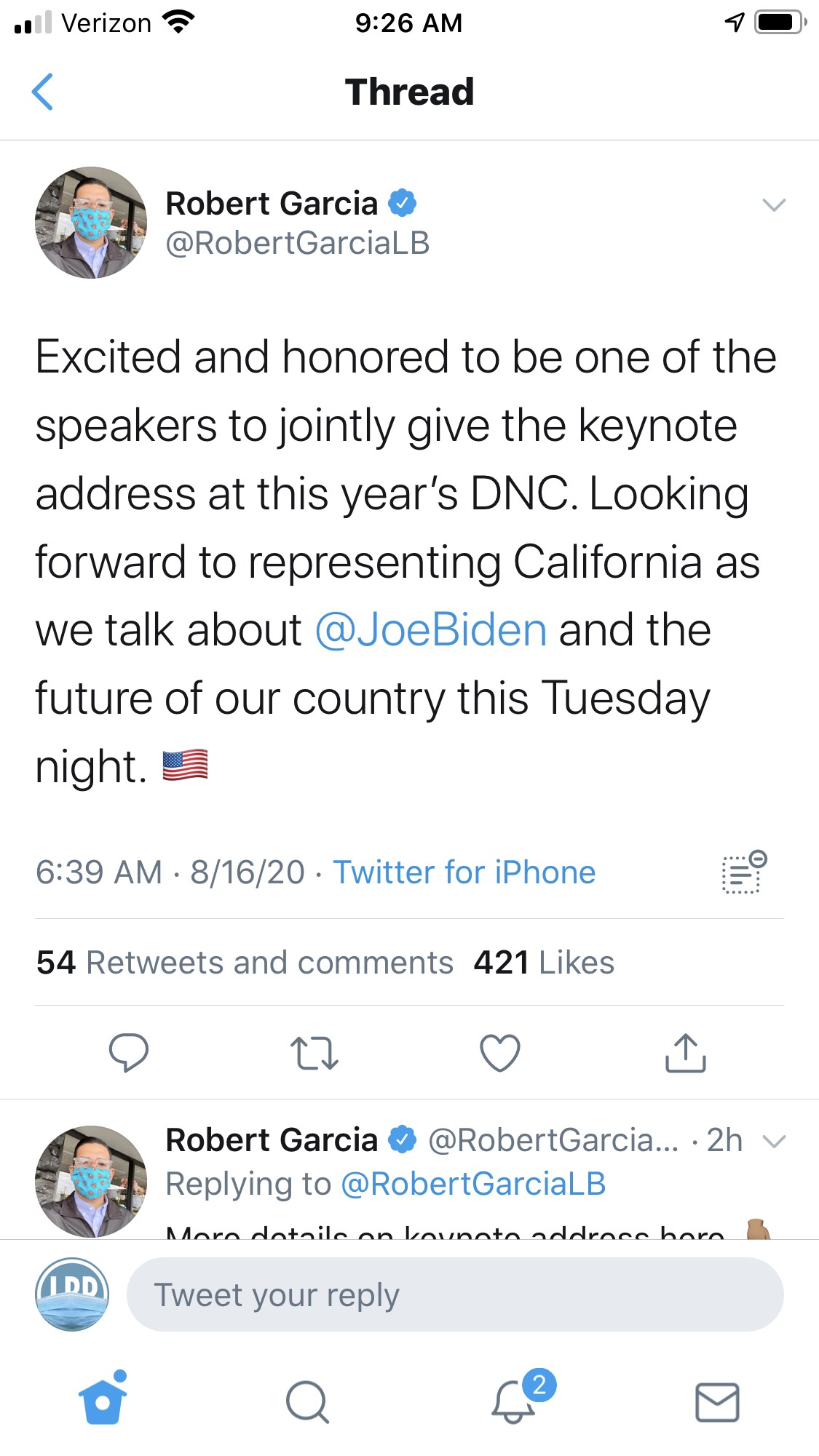 Originally slated to take place in Milwaukee, the convention will, for the most part, take place virtually with presidential nominee Joe Biden and running mate Harris accepting their nominations from the Chase Center in Biden’s home state of Delaware.

California will be represented well on the convention’s virtual stage. Besides Harris and Garcia, other scheduled California speakers include House Speaker Nancy Pelosi, Governor Gavin Newsom and Secretary of State Alex Padilla.

Speakers have reportedly been “encouraged” to choose interesting locations for the speeches, places of symbolic, historic or cultural relevance. There is no word as of yet where in Long Beach Garcia plans to give his speech.

“The convention keynote has always been the bellwether for the future of our party and our nation,” said Joe Solmonese, CEO of the 2020 Democratic National Convention in a statement. “When Americans tune in next week they’ll find the smart, steady leadership we need to meet this critical moment.”

Though keynote speakers are seen as being in the ascendant part of their political career, the selection does come with its risks. Clinton, who, as president was oratorically compared to Ronald Reagan and Franklin Roosevelt, gave such a poorly received keynote address—the biggest cheer he received was when he said “In conclusion …”—that it was thought to have ended his political career.