The high-profile activist Shaun King alleges at least two former Long Beach police officers participated in a thread on a private Facebook group for retired cops where members talked about how they could kill him.

In response, the Long Beach Police Department says it has requested help from the FBI to investigate, calling the posts “incredibly disturbing.”

Thursday morning, King, who is known for forcefully criticizing police, posted screenshots he said were from a Facebook group for California law enforcement officers. Two law enforcement sources told the Long Beach Post that the private group is specifically intended for Long Beach police retirees, their friends and other LBPD employees.

According to King, a former LBPD officer named Laura Tartaglione started the discussion by sharing an image that said: “I think California needs to start putting a team together of retired military, police, and NRA Members. These criminals that the Democrats created need to be stopped.”

In her post accompanying the image, Tartaglione said, “The man who put this tweet out today is a FOUNDING MEMBER OF BLM , he also introduced Bernie Sanders at his attempted presidential run,” according to King.

From King’s description, it wasn’t entirely clear who Tartaglione was referring to, but King was a high profile Bernie Sanders surrogate, and the responses to her post allegedly included calls for violence against King specifically.

King shared screenshots he said were from other commenters that said “Shaun King needs to be put down,” “Toss this guy from a helicopter,” and “Need a sniper.”

According to King, a retired LBPD officer named Jeffrey Garcia also responded to Tartaglione, saying, “I am ready to rock and roll let’s get it going boys and girls time for a #6.”

King says a No. 6 commonly refers to a law enforcement code for a “long distance operation.” However, in Long Beach, officers broadcast a “Code 6” when they’re out for an investigation.

“Organize it jeff,” Tartaglione wrote back to Garcia, according to a screenshot from King. 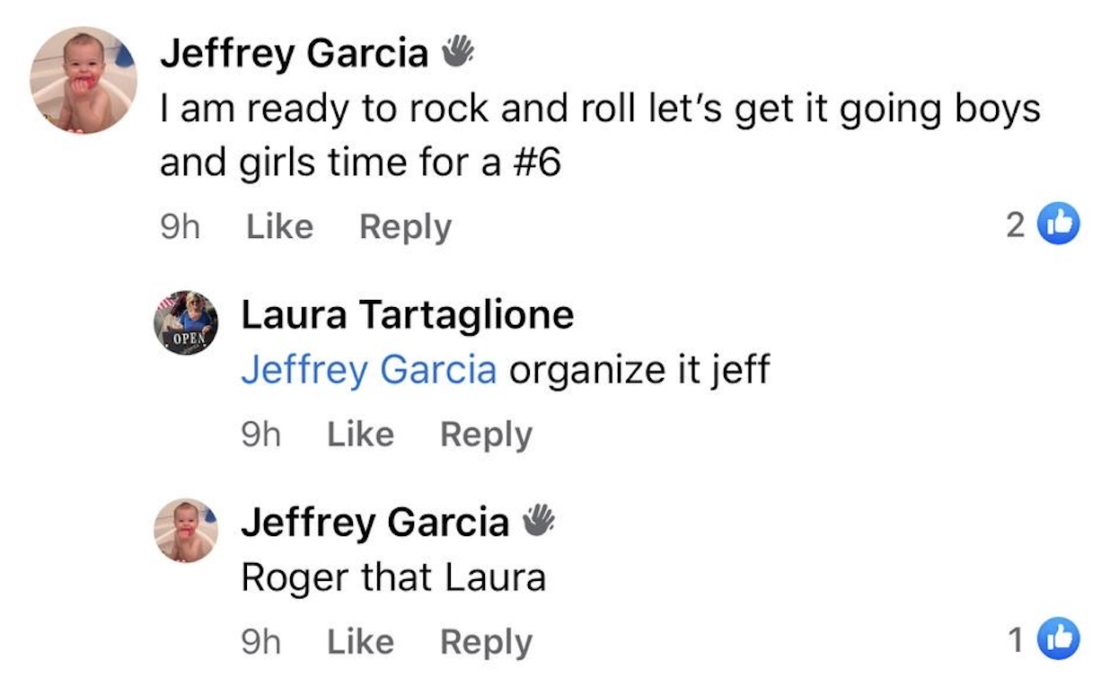 Tartaglione and Garcia did not respond to calls and messages from the Long Beach Post, but a company associated with Tartaglione called King’s allegations false.

“She has not called for or participated in the activities that are being claimed against her by an activist,” a post on the Honor Bands Facebook said. “She needs our support right now as the mob is attacking her and this page.”

Tartaglione co-founded Honor Bands in 2015. The organization provides the black bands officers place over their badges when a fellow member of law enforcement dies.

Tartaglione last worked for the LBPD in 1997 and Garcia left in 2014, according to the department. Another former employee, Mary Jensen—whose name King showed attached to a message saying “Count me in!” without further context—left the LBPD in 1993, according to a spokesman.

Police said nobody named in King’s article is a current LBPD officer and, “We also have no information indicating that any other current LBPD employees are involved in this situation.”

However, a current LBPD employee who asked not to be named in order to speak freely said at least some current officers are aware of the private Facebook group, which has about 500 members.

“They’re a bunch of cowboys on there,” according to the officer, who criticized the views shared in the group.

On Thursday, an admin of the group posted the link to King’s article, saying “Someone has snuck in to our group or is sharing information,” according to two people who shared a screenshot with the Long Beach Post. The admin cautioned members about who they approve to be part of the page.

A LBPD spokeswoman said the department has no access to the group and, “We cannot control how individuals who are no longer employed with us chose to utilize their personal social media.”

Long Beach Councilwoman Jeannine Pearce said the situation reveals “what clearly is a culture of racism and violence.”

“City leadership is not happy. Retired officers threatening the lives of people who speak up is exactly why people do not speak up,” Pearce said in a statement. “Enough with saying it’s a few bad apples, or they’re retired. They are a product of the system. I hope this is the moment we see swift actions taken.”

Long Beach police said its detectives were investigating along with asking for help from the FBI.

“The Long Beach Police Department is appalled and deeply disturbed by the tone and content of the posts which in no way reflect the core values and professional standards held by the men and women in our organization,” the department said in a statement. “We are 100% committed to working in partnership with our community to ensure that all people are treated with respect and professionalism and will not tolerate any bias, racism, or threats to individuals.”

Editor’s note: This story has been updated to provide more context about the post that King alleges kicked off the talk of killing him.