In a small town in California’s Central Valley, a trio of siblings lost both their parents to COVID-19 within two weeks of each other in 2021. Their deaths made the oldest son a pseudo-parent to his teenage siblings overnight and forced the brothers and sister to figure out a future without their mom and dad.

In California, 32,000 children under 18 have experienced the death of a parent or primary caregiver from COVID-19, according to research by the Global Reference Group for Children Affected by COVID-19. Those children — so-called “COVID orphans” — are likely to face not just financial hardship but a lifetime of mental health, educational, relational and emotional challenges, researchers say.

Now, California has become the first state to create a financial safety net for some COVID orphans when they reach adulthood. The state has allocated $100 million in its recently adopted budget for the Hope, Opportunity, Perseverance, and Empowerment for Children Trust Account Fund, which will seed trust funds for low-income children who lost a parent or primary caregiver to COVID-19. Trust funds will also be created for long-term foster youth.

The funds, known as “baby bonds,” would be started with state money and allowed to grow until the child turns 18. At that time, the young person would be able to access the fund for housing, education or other expenses.

“It will make it so that people who are in the most need, who’ve lost a parent or caregiver to COVID, will have a little bit of extra help,” said Emily Walton, policy director of COVID Survivors for Change, a national organization advocating for benefits for Americans impacted by COVID-19. “The lack of several thousand dollars could stop a child from jumping on to the next thing and getting an education or getting a job in a place where they know they can be successful.”

The details of the plan will be laid out later this summer in one of several trailer bills, which add specifics to the state budget. Advocates say eligibility will most likely be tied to enrollment in Medi-Cal, the state’s health insurance system for low-income Californians. Amounts deposited are expected to reflect the age of the child and how long before that person turns 18.

In the Central Valley agricultural town of Coalinga, Martin, Angel and Miranda Basulto felt lost after both of their parents died in January of 2021.

Their father, Martin Basulto, a truck driver, thought he was exposed to COVID-19 at work. Their mother, Rosa Garcia Cortez, who worked as a front desk receptionist at a local hotel, got sick after taking care of their dad. Basulto, 44, and Garcia Cortez, 46, were taken to a local hospital and within weeks they were both dead.

Overnight, Martin, now 27, was in charge of his family. He moved back home from Fresno to take over responsibilities like paying the mortgage and making sure his sister Miranda got to high school on time.

“In the beginning, I didn’t care about school. I was so angry,” said Miranda, now 17 and about to start her senior year. “We are all going to die someday so what is the point of trying in life?”

But then someone asked her if she wanted to die without living up to her full potential.

“That hit me because I know my parents wanted to do a lot of things in their life they couldn’t do,” she said. “So, I want to live my life to the fullest potential.”

She’s on the honor roll now and looking forward to college — a dream her father had for her.

The baby bonds are critical for their family, Martin said. He remembers their parents would help him with groceries or step in when he could not pay his own phone bill when he first moved away.

“The smallest amount can go a long way,” Martin said. “I want her to be prepared for when she goes to college and I’ll help in any way I can so any other help available is greatly appreciated.”

Latino children account for the majority — 66% — of COVID orphans in California. Many of them are the sons and daughters of essential workers who were already facing economic uncertainty before the pandemic.

Across the country, non-white children lost parents or caregivers at four times the rate of their white peers, according to a report titled  “Hidden Pain, Children who Lost a Parent or Caregiver to COVID-19 and What the Nation can do to Help Them,” released in December by The COVID Collaborative. Nationally, 250,000 kids have been left orphaned by the death of at least one parent or primary caregiver as of March 2022, reports the Global Reference Group for Children Affected by COVID-19.

Children who have lost a primary caregiver to COVID-19 have unique needs, said Marlo Cales, executive director of the Mourning Sun Children’s Foundation, an Apple Valley-based support organization for youth and their families who are grieving a death or loss of a loved one through abandonment, imprisonment or other types of separation. Cales said that for COVID-19 survivors, bereavement was intensified because many could not gather or grieve their loss with others. The ongoing pandemic is prolonging grief, she said.

“They are really feeling more alone and isolated,” she said. “Not only have they lost their person, they seem to be struggling with the inability to be able to connect with or find services that are meeting their particular needs of loss and grief because of the pandemic.”

California’s new program for COVID orphans is part of a long-standing broader effort to provide trust funds for all low-income children who qualify for Medi-Cal regardless of COVID’s impact on their families, said Shamika Gaskins, president and CEO of Grace and Child Poverty California, which advocated for the money.

“This is really a part of our longer-term vision to end child poverty in California by closing the racial wealth gap and providing opportunities for our most vulnerable children,” Gaskins said.

Delaware, Washington, Connecticut, Washington D.C., New York and Iowa are considering or have created their own trust fund programs for low-income children. Eligibility for most of the programs or proposals is tied to qualifying for the Medicaid program in each of those states.

Connecticut and Washington D.C., approved baby bond programs last year. The Connecticut program begins in July 2023 and includes deposits up to $3,200 for each child. The D.C. program started with babies born October 2021 and the funds are seeded with $500 plus annual deposits as long as the family’s income qualifies.

California’s new program is the first in the nation to provide trust funds for COVID orphans and long-term foster youth. Walton, of COVID Survivors for Change, said the organization is working with a handful of states to consider scholarships or similar trust funds for children who have lost a parent or caregiver to COVID-19.

As a teacher in Marin County, Kate McLaughlin doesn’t think her daughter, Éala, would qualify for the trust fund, but she is reassured that should her daughter need the support in the future, she could access it. Her husband, Jason McLaughlin, died from the pandemic virus last year when their daughter was 3. He was 48.

“Our people are not just a number,” she said about those who died from COVID-19. “I want people to know Jason McLaughlin was a really great guy and an incredible father and he was on this planet and his life mattered.”

The family hunkered down when the pandemic began. Kate believes Jason was exposed on one of their quick runs to a grocery store or Home Depot. He was sick at home for 10 days before being hospitalized. Kate and Eala both tested positive too but only Kate had symptoms.

Around Valentine’s Day of 2021 Jason’s working kidney started to fail. He was put on dialysis but died within days.

“I was able to be with him in his last moments,” Kate said. “The biggest challenge for us is adjusting to the gigantic loss in our lives.”

When Jason’s hometown Boston Celtics recently played the Warriors in the playoffs, Kate felt a wave of heartache. He had looked forward to watching games with his daughter.

“He would be loving it. He should be here to watch this game, to watch it with her,” Kate said. “Dealing with those constant reminders that he is gone is terrible.”

A study published in the medical journal Pediatrics in October found that orphanhood is a secondary tragedy brought on by the pandemic. Researchers say that children’s lives are forever changed by the loss of a parent or caregiver and addressing it needs to be a top priority. It is considered an adverse childhood experience that is linked to mental health challenges, lower self-esteem, suicide and other problems later in life.

California’s trust funds began as a bill introduced by Democratic Sen. Nancy Skinner of Berkeley that was sailing through the Legislature. In May, Skinner pulled the bill because the funds for COVID orphans were going to be included in the budget proposal.

“At a time when California has immense wealth, we can afford to ensure that children who have suffered an inconceivable loss will be comforted knowing they’ll have a little help at a time when they no longer have parents to rely on,” Skinner has said. 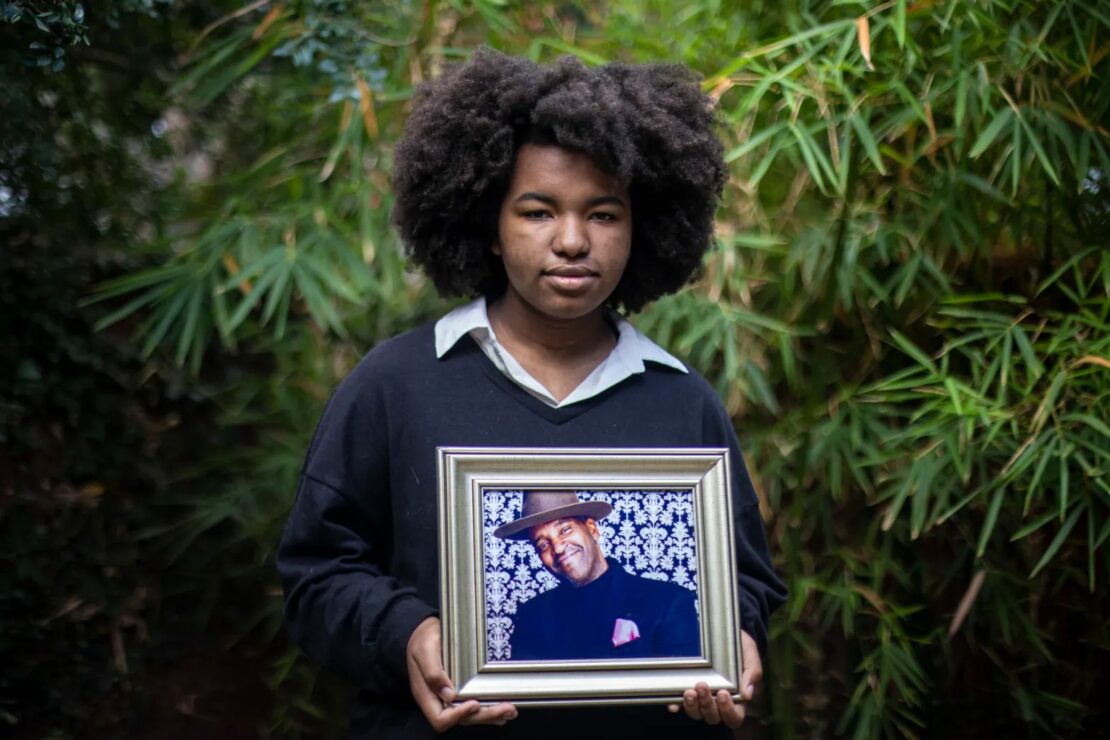 MacLemore Porter, her father whose father died of COVID, poses for a photo in her backyard in Bakersfield on June 22, 2022. Photo by Larry Valenzuela, CalMatters/CatchLight Local

In Bakersfield, Hillary Porter is keeping an eye on the progress of the trust fund program. She is one of the surviving parents who advocated for the program.

In March of 2020, Hillary, her husband Lloyd Porter and their daughter MacLemore were packing up their home in New York City for a move back to California.

Then Lloyd, an actor, got sick with COVID-19. Six weeks later he died.

“He really fought the good fight. He kind of rallied back,” Hillary said. “I was in the process of planning rehab for him and suddenly he was gone.”

Hillary and their daughter stayed the course and moved back as the family had planned.

Lloyd grew up in Bakersfield and Hillary in Salinas. College sweethearts, the couple met at Fresno State when they were officers of Black student organizations.

Lloyd was the kind of guy who literally took off his sweatshirt and gave it to a young man arriving in San Francisco who didn’t realize how cold it would be, his wife said.

“Because my husband passed away in May of 2020 we couldn’t have a funeral, couldn’t gather with friends or family. It was very much that we were in a bubble,” she said. “That adds another layer of trauma or grief.”

She is looking to the trust fund to help kids with mental health support as well as college.

“The kids, when they are turning into adults, can now dream a little bigger,” Hilary said. “It could change the trajectory of their goals at 18.”

Explainer: Monkeypox has arrived in Long Beach. Who’s at risk and who can get vaccinated?