Employees at a Starbucks in Belmont Store submitted a petition to seek unionization on Monday, joining two other local stores—one in Long Beach and one in Lakewood—in the nationwide movement.

After months of organizing and an in-person meeting with Starbucks CEO Howard Schultz on Friday in which Long Beach employees (which the company refers to as “partners”) said they felt disrespected, workers at the 5251 Second St. location wrote in a statement that “the conditions we have been working under and the unfair labor practices we have seen in the past year has opened our eyes to the value in forming a union.”

A Starbucks company spokesperson did not respond to requests for comment.

In a statement on Sunday, Schultz wrote that his company plans “to move forward constructively with all Starbucks partners. However, we must not be distracted by the different vision being put forward by union organizers at some Starbucks stores.”

He wrote that while not all the partners supporting unionization are “colluding with outside union forces, the critical point is that I do not believe conflict, division and dissension—which has been a focus of union organizing—benefits Starbucks or our partners.”

As of Monday, 200 stores across the country have filed petitions with the National Labor Relations Board, according to the worker group. That includes the Starbucks locations at 3390 E. Seventh St. in Long Beach and 4833 Candlewood St. in Lakewood, which announced their intent to unionize last month.

Schultz, who returned to Starbucks as chief executive officer on April 4, met with partners around the U.S. and China last week for “collaboration sessions” with the intention to “get underneath the challenges in the company that need to be addressed.”

During a meeting between employees and management inside a conference room at the Pacific Gateway building near the Long Beach Airport, Belmont Shore store employee Madison “Mads” Hall, who uses they/them pronouns, said that Schultz spoke to them in a “very condescending” tone and manner after they brought up union-related issues.

“I felt very disrespected,” Hall said. They said Schultz repeatedly cut them off during the meeting, which Hall posted on social media.

About 20 Starbucks employees from several stores in the Long Beach area first watched a recorded speech by Schultz, who expressed disapproval of unions.

Starbucks is “being assaulted in many ways by the threat of unionization,” Schultz said in the video. After the hour-long screening, Schultz appeared in-person and spoke with employees.

“It was supposed to be an opportunity for us to have a voice,” Hall said. “But the second he walked in, it was very clear that there was a huge power dynamic.”

The meeting confirmed to Hall that their store should move forward with filing. “What are we waiting for?” they recalled asking themself. 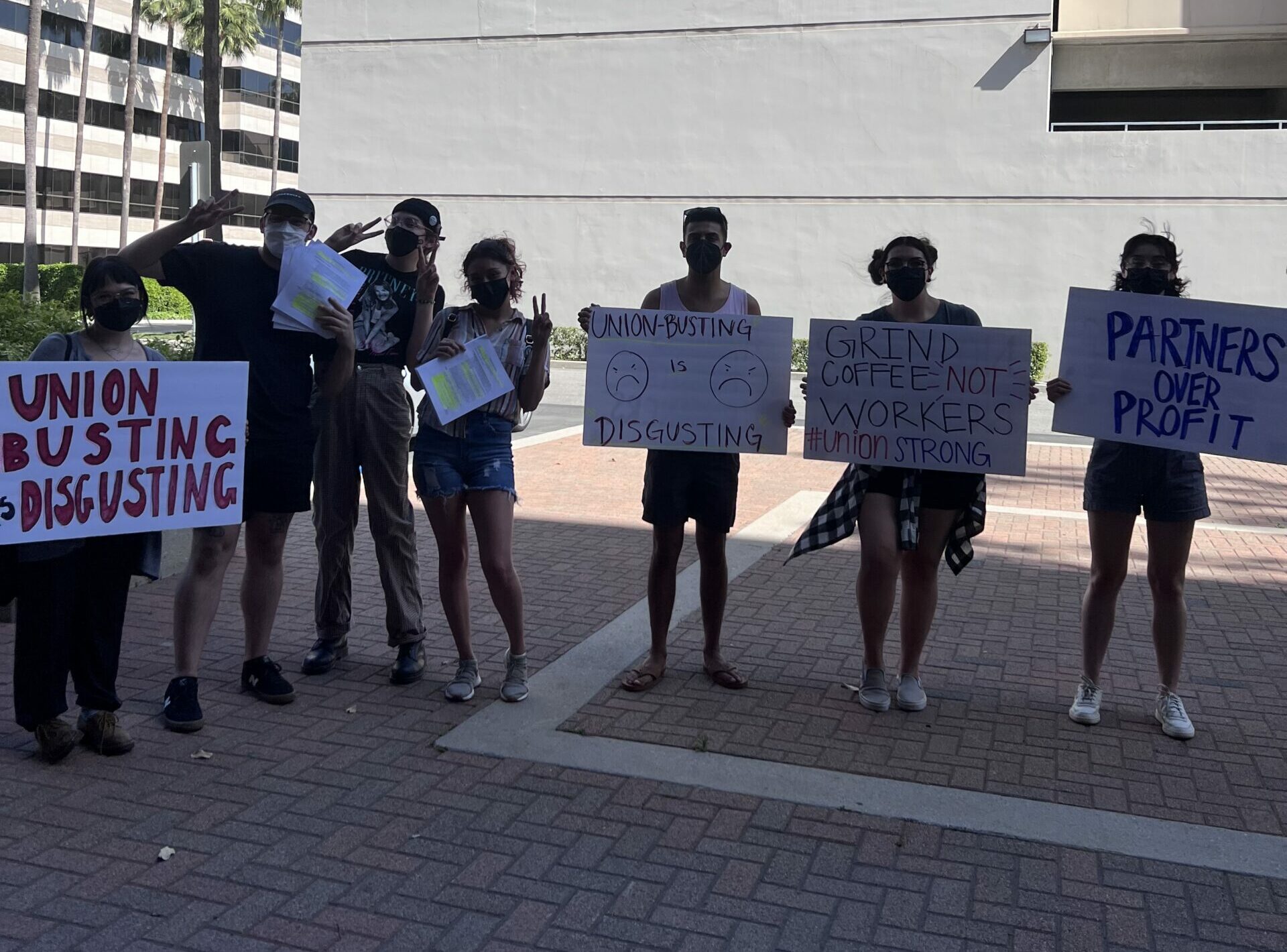 Josie Serrano, a partner from the Seventh Street and Redondo Avenue store that submitted a petition to unionize last month (whose pronouns are also they/them), said that they and about 10 other protesters held signs outside of Friday’s meeting. Workers at Serrano’s store and the one in Lakewood—the locations that have already submitted petitions to unionize—were not invited to the meeting itself.

Serrano expressed that higher-ups might be on edge as more stores seek to unionize and lower level employees continue to question leadership.

“Knowing that they cannot take the heat from a barista just asking questions about their anti-union stances is a lot,” Serrano said. “We’re obviously hitting a nerve with corporate.”

Hall said that the catalyst for them to push for unionization is being overworked, especially during the holiday season when customers—particularly those arriving on the popular Long Beach Trolley tours—flock to their store.

“We’re basically expected to suffer through it,” Hall said. “You are crying from stress on the floor.”

Hall said that they hope to inspire others to demand better working conditions.

“This is bigger than just Starbucks or me.”