The Starbucks baristas at the Redondo Avenue and Seventh Street store in Long Beach don’t hate their jobs.

The basics of their work—mixing handcrafted lattes, blending Frappuccinos and sparking up conversations with customers in the bustling Belmont Heights neighborhood—have proved to be among their easiest tasks during an ongoing battle with the coffee giant over a movement that has swept through the nation: They are seeking to unionize.

This Friday, May 13, their months-long efforts will conclude with an official vote conducted by the National Labor Relations Board to determine if the store will be the first to unionize in Southern California. If passed, they will be joining two stores in Santa Cruz that just voted in favor of forming a union this week, the first in the state.

“This is where it all started,” says Josie Serrano, sitting at a round table in the lush garden area behind Ma ‘n Pa Grocery in Belmont Heights. It’s the same place where the employees at the Redondo Avenue and Seventh Street store would meet for the first time a few months ago to discuss their plans, answer questions and express their grievances with the company in secret. It became a regular spot for the group’s union meetings in the months that followed.

Serrano, 28, has been working at Starbucks for four years and can recall when the news of forming a union began to brew inside the coffee shop. Last December, Starbucks workers in Buffalo, N.Y., had won a groundbreaking bid to become the first unionized store in the country, which they had been petitioning for since August 2021. They laid the foundation for over 250 stores across the nation that have now filed their own petitions to hold union elections. 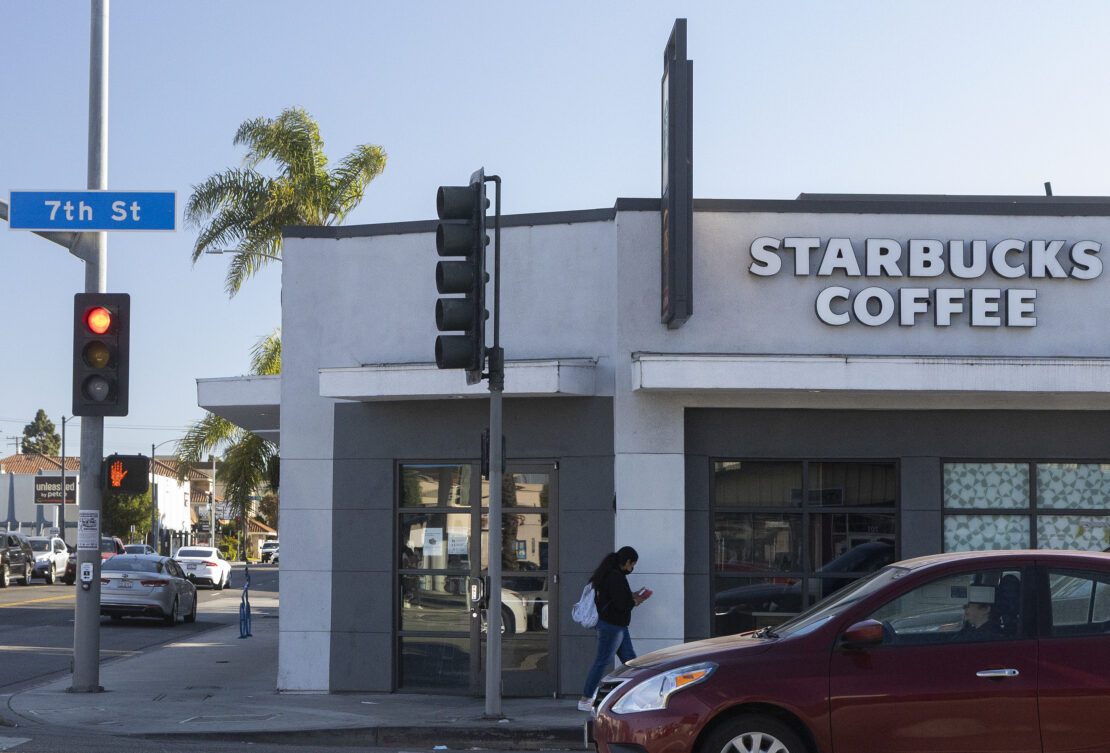 A young woman looks at her drink as she exits Starbucks at Seventh Street and Redondo Avenue Tuesday, March 8, 2022. Photo by Brandon Richardson.

In California, 22 petitions have been filed from all across the state: Long Beach, Los Angeles, Lakewood, Anaheim, Mill Valley, Los Alamitos, Capitola, Covina, La Quinta, Goleta, Fresno, El Dorado Hills and Brawley. They are seeking to join Workers United as part of the Service Employees International Union, or SEIU.

Serrano and another lead organizer said they were spurred on when they heard of a reference Starbucks CEO Howard Schultz made during a meeting with employees at the Buffalo store. Schultz, apparently telling a story meant to inspire selflessness, mentioned that when Jews were taken to concentration camps during the Holocaust, they often volunteered to share their rationed-out blankets with five other people.

“So much of that story is threaded into what we have tried to do at Starbucks is share our blanket,” Schultz, who is Jewish, said, according to a transcript from the meeting in November.

Serrano and her co-organizer, Alexis, said they were shocked by the comment. On top of this, they were constantly reading about accusations that Starbucks partners were being fired for expressing their pro-union views. (Starbucks has said the firings were not out of retaliation, but the company’s actions have drawn scrutiny from labor regulators. Last Friday, the NLRB filed a complaint against the Starbucks locations in Western New York alleging over 29 labor practice charges for union-busting efforts, retaliation, unlawful threats and surveillance, and 200 violations of the National Labor Relations Act.)

Serrano and Alexis, who requested to omit her last name for the story out of fear that the publicity could affect future job opportunities, began researching labor law intensively and gathered their fellow baristas for casual hangouts that turned into full-on planning sessions. They discussed the movements happening on the East Coast, expressed their qualms surrounding the idea and discussed their biggest fear leading up to the petition: How would the company react?

“Partners were asking us immediately, ‘What does that mean for us?’ and ‘Will we get in trouble for it?’” said Serrano. After hearing all the allegations of union-busting at other stores, they feared retaliation.

“We took it upon ourselves to learn as much as we could about labor law to figure out what our boundaries were but we also wanted to feel protected,” said Serrano.

One thing they did know, however, was that there would be strength in numbers. The Long Beach store joined forces with organizers from a nearby store in Lakewood on 4833 Candlewood St. near Lakewood Boulevard. Serrano expects both stores to vote in favor of a union on Friday.

“I think that if we have no votes in our final vote count, it’s purely because of intimidation. It’s not because they’re anti-union,” said Serrano.

The two stores drafted their letters and sent them out on March 7. In the petitions, signed by 14 and 19 employees at the Long Beach and Lakewood locations, respectively, employees wrote they are overworked, understaffed and underpaid with “wages that keep us constantly struggling” with inflation. Other top complaints included unfair scheduling and inadequate COVID-19 policies. To Serrano and Alexis, 22, this is the bare minimum that the worldwide, billion-dollar corporation should provide.

Of the Long Beach store’s almost 20 employees, they say only one outwardly opposed the union, others feared the implications of showing their support. “We as partners have more in common with each other than with the billionaires,” said Serrano.

Since then, the employees say the company has been posting flyers in break rooms designed to dissuade them from unionizing and holding required meetings, where managers will suggest that they will not qualify for specific benefits if they vote yes.

“They have implied really heavily that we can’t transfer stores after voting yes,” said Serrano. “They’ve also suggested that we won’t qualify for pay raises and benefits from the company if we are part of a union while we are negotiating a contract and that’s simply not true.”

The company did not immediately respond to questions about its tactics at the Long Beach store.

Last month, Schultz visited the Long Beach area to hold a “collaboration session” with baristas from nearby stores, and employees left saying they felt disrespected. His visit inspired a second Long Beach store in Belmont Shore to petition for unionization. 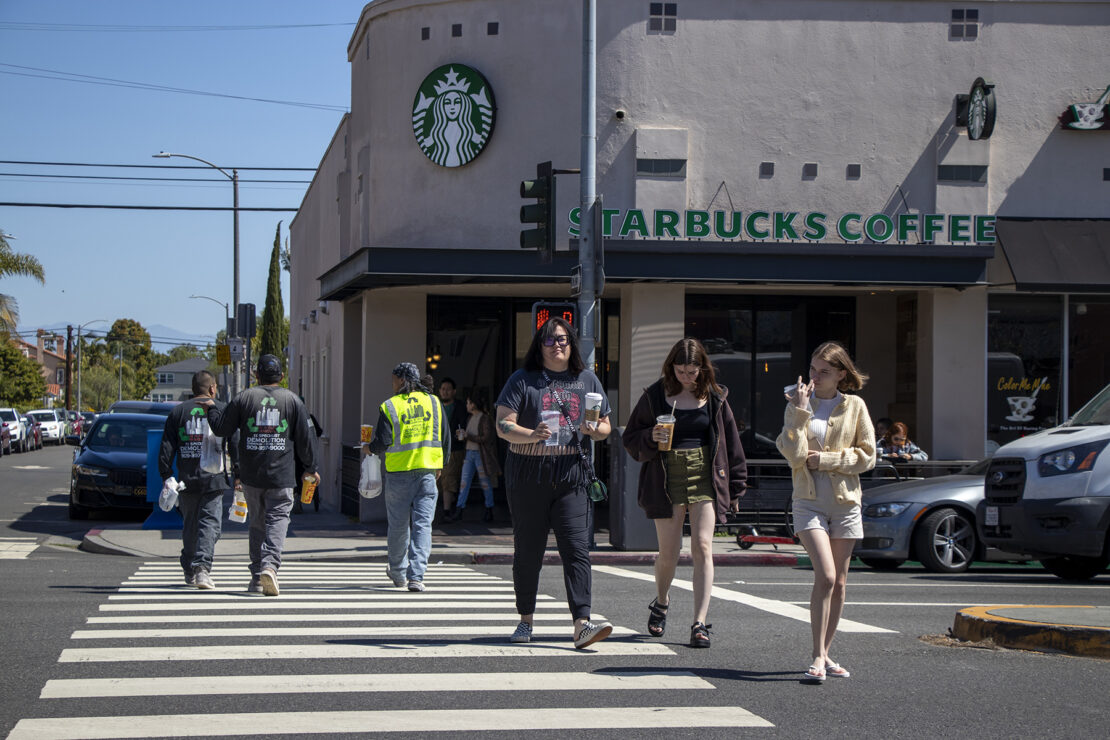 In a statement following the meeting, Schultz wrote that his company plans “to move forward constructively with all Starbucks partners. However, we must not be distracted by the different vision being put forward by union organizers at some Starbucks stores.”

From outside the company, Starbucks unions have received a tremendous amount of support. On Wednesday, 14 Senate Democrats sent a letter to Schultz stating that unions are crucial in improving workplace conditions, wages and overall quality of life for workers.

“Starbucks is an American success story, and at this moment you can be the model other corporations look to by partnering with your workers who are risking their livelihoods to demand a voice on the job through a union,” the letter reads.

Additionally, at a rally held at the Long Beach location on Sunday, April 24, dozens of customers offered congratulations and words of encouragement for the baristas. Mayor Robert Garcia and Councilmember Rex Richardson also showed up to offer their support for the group. Customers were encouraged to order their drink under the name “union strong” in-person or through the mobile ordering feature.

Perhaps the most memorable message of support came from a Port of Los Angeles union worker who told Alexis that he has been working at the ports for over 30 years and was rooting for them to unionize. Alexis, who had grown up near the ports, saw it as a full-circle moment that encompassed how far the movement has traveled.

“I feel like that’s where (Starbucks) fails because they don’t seem to realize how good of a community that we have that stands beside us with this effort,” she said.

Though they have faith that tomorrow they will become the first unionized Starbucks store in Southern California, Serrano and Alexis know for certain that no matter the outcome, they will not be walking away undefeated.

“We inspired Howard Schultz to come to Long Beach, we showed our younger employees that we don’t tolerate disrespect and we sent a good message to everyone in California that a couple of random kids can start this whole thing,” said Serrano.

They look forward to gathering as a group once again, at the same round table behind Ma ‘n Pa Grocery where everything began, hopeful for the future.