State approves Long Beach housing plan, but city has more work to do to meet its goals • Long Beach Post News
- ADVERTISEMENT -
Help us light up the city; Add your home to the 2022 Holiday Lights map. CLICK HERE

California officials have approved Long Beach’s plan for building new housing, but the city will still have to make room for another 10,000 units on a sped-up deadline thanks to a recently-passed state law—or potentially be frozen out of state and federal funding sources.

Local officials concede they are unlikely to meet an Oct. 15 deadline for the additional units, but they are hopeful the state and federal governments will look favorably upon their efforts to achieve their overall housing goal of zoning for 26,500 units set by the Southern California Association of Governments, or SCAG.

“It’s our understanding that our work in good faith and making progress as expediently as possible will be looked well upon,” said Alison Spindler-Ruiz, the city’s acting planning bureau manager who worked closely on the Housing Element.

At stake is potentially millions in state and federal grants that would help the city build housing for those at or below 60% of the area median income, people experiencing homelessness or other housing needs. Those funds will become available in May.

But a major deadline looms, thanks to Assembly Bill 1398 that became law in September. The bill was intended to prevent cities from passing non-compliant housing plans to avoid penalties, with the hope of speeding up housing production. But it has put jurisdictions like Long Beach in an impossible situation of quickly rezoning large swaths of parcels, a process that requires public noticing, votes by local legislative bodies and months of gathering community input. 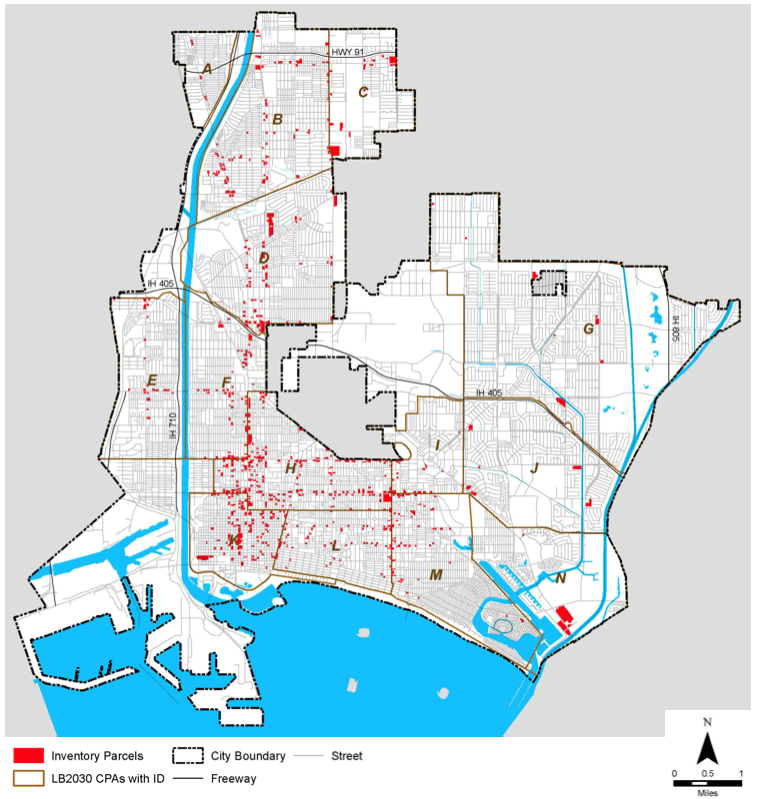 A map showing all the parcels identified in Long Beach’s Housing Element where future housing development could go.

The law is so new that it’s unclear what enforcement will look like after Oct. 15. State housing officials said earlier this year that cities working toward compliance in good faith would factor into any kind of penalties, and those who are not “would be at the head of the line for enforcement.”

There is the possibility that a new bill could be introduced to clean up some of the unintended consequences brought on by AB-1398, but in the meantime, the city said it’s pleased to have gained compliance. Spindler-Ruiz noted that Long Beach was one of the first of the 191 cities that make up the SCAG to achieve compliance with the state.

The city must meet the Oct. 15 deadline because it submitted a revised Housing Element right up against a February deadline, and the plan did not get approved in time. It will now have one year, instead of three years, to implement its new zoning plan.

The city, however, has just begun an ambitious rezoning effort in Central Long Beach, which it expects will take at least a year to complete. Known as the Zone In: City Core plan, the project area includes many of the parcels the city identified in the Housing Element as sites for potential future development. Those parcels will be rezoned over the next year and will make a significant dent in the city’s inventory of parcels that needs to be rezoned.

Spindler-Ruiz said the city had considered trying to zone the parcels within the area faster to try and meet the October deadline, but ultimately decided it was more appropriate to allow the community to give input on those parcels as part of the full year-long process.

After that process is complete, the city will move on to other areas like the Santa Fe Corridor, which has a temporary development ban until it can be appropriately rezoned.

Editors note: Long Beach was one of the first SCAG cities to achieve compliance, not the first. The story has been updated.