After a year learning from home, students across California say they want school districts to spend an expected windfall of federal and state funding on more mental health services, updated curriculum and racial bias training for teachers.

The results of a survey of more than 1,000 students, including those in Long Beach, showed students want every district to spend about six weeks—whether that’s over the summer or at the start of the school year—addressing depression, stress and anxiety, which the students almost uniformly said were obstacles to learning.

The survey results showed 96% of youth think mental health and wellness is important, but only 37% of them said their schools are doing it well.

Aside from addressing mental health, 92% of students surveyed said racial equity in curriculum and teaching is important to their ideal vision of school, but only 49% say their schools are doing it well, according to the report. Curriculum updates could include speaking about more race during class and recent events such as hate crimes, the students said.

“We know that the pandemic has not only uncovered the deep racial inequities in our schools and communities, but it also exacerbated the learning conditions for students who were already at a big disadvantage,” said Maura Villanueva from a nonprofit called Californians for Justice, which hosted a press conference on Tuesday to discuss the results of the survey.

Hannah Esqueda Freeman, a spokesperson for the nonprofit, said the organization is still calculating the figures of a proposed spending plan, which would also include $1.9 trillion American Rescue Plan Act, and previous funding from the COVID-19 relief bill and CARES Act passed under the Trump Administration. 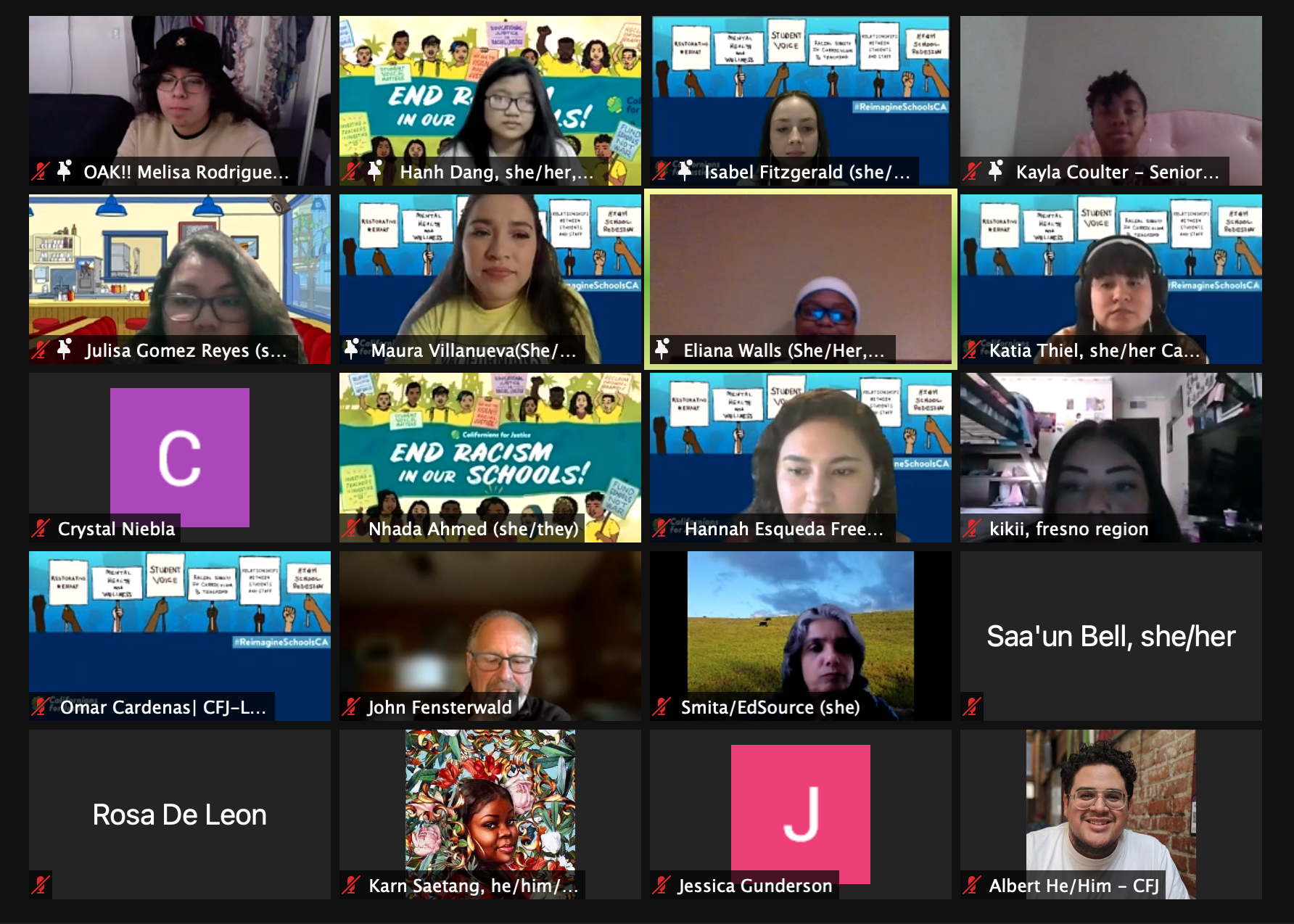 In a screenshot, students representative for Californians for Justice provide a testimonies during a virtual press conference on Tuesday, March 23, 2021.

Students said a year of distance learning impacted their mental health. Some had to endure a crowded environment living in homes with many family members.

Eliana Walls, a Long Beach Poly High School student who helped collect the survey data, said that she has been juggling school work, taking care of her 12-year-old brother and chores while her mother, and two older siblings, ages 18 and 20, work and attend college from home, respectively.

“That responsibility falls on me,” she said in an interview.

Of the respondents, 87% identified as a person of color, and most want more racial-bias training for teachers but also more teachers that looked like them.

Kayla Coulter, a senior at Cabrillo High School who participated in the press conference, said in an interview that she has observed differences in treatment by race such as “favoritism” or uses of racial slurs.

Now that students can opt out from showing their faces on screen during class, Coulter, a Black student, said that there’s less classroom punishment. 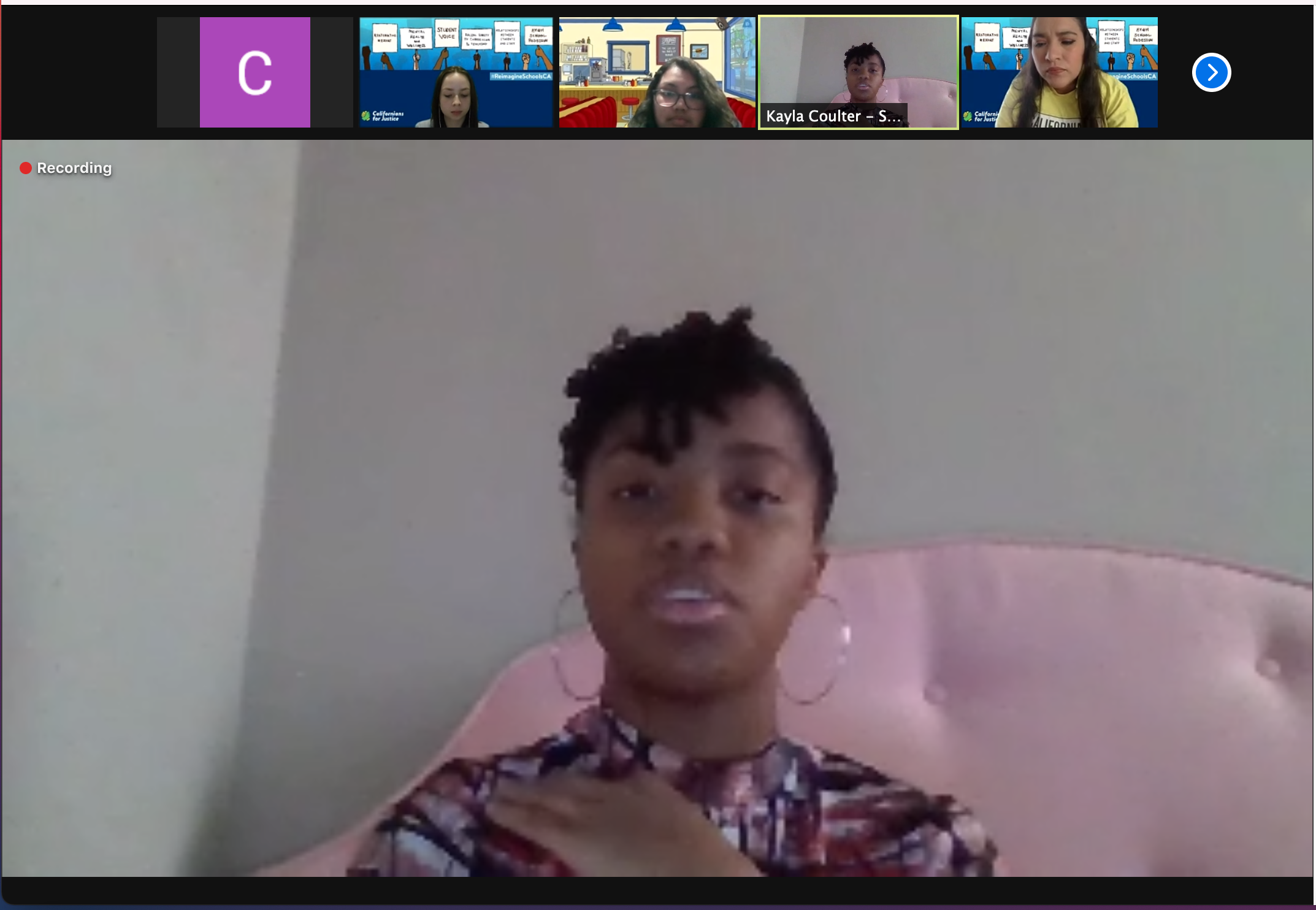 In a screenshot, Kayla Coulter, 18, a Cabrillo High School student and representative for Californians for Justice, provides a testimony during a virtual press conference on Tuesday.

Students in the survey said it’s important to use the new public funding to “rebuild and reimagine” an education system that they say is failing them.

Combined with the $99.4 million from a previous COVID-relief fund as well as state and federal CARES Act fund allocations, Long Beach Unified, specifically, is expected to receive $410 million, according to calculations from an EdSource database.

An LBUSD spokesman said in January it plans on waiting for further information on the requirements for using the COVID relief funds before making a decision.

The district has, however, committed to using the first round of funding on technology, professional development, nutrition for students, distance learning and personal protective equipment.

Editor’s note: This story was updated to reflect the correct name of a speaker, Maura Villanueva, who was erroneously identified as Katia Thiel.