Long Beach Unified School District teachers, parents and members of the community protested with a car caravan Wednesday evening in response to the district asking teachers to work from empty classrooms to give virtual lessons during the ongoing coronavirus pandemic.

“The goal should be the reopening of schools for in person learning when it is safe with a comprehensive plan that keeps students, teachers, staff and our LBUSD families safe,” Jason Goldfischer, a teacher at Lakewood High School, said in a statement.

Parents felt frustration too after receiving an email from LBUSD on Friday, which gave them less than a week to make a yearlong commitment of opting for one of three teaching models for their children: online only, in-person if schools reopen or a hybrid of both. The deadline to decide was Aug. 7 but today officials announced it has been extended to Aug. 14.

“That’s not right,” Lilia Ocampo, a parent of an elementary student, said in Spanish.

Sok Thea, a parent of two elementary school students, said it isn’t practical to have his children, ages 6 and 8, sit in front of a computer for nearly eight hours if he opts for the online only option.

“Even adults cannot function in front of computers for that long,” he said, adding that while he supports online learning, the hours need to be shorter. Should the schools reopen, he added that LBUSD needs to provide a clearer plan to keep everyone safe. Currently, he doesn’t support reopening schools because he doesn’t think it’s safe yet. 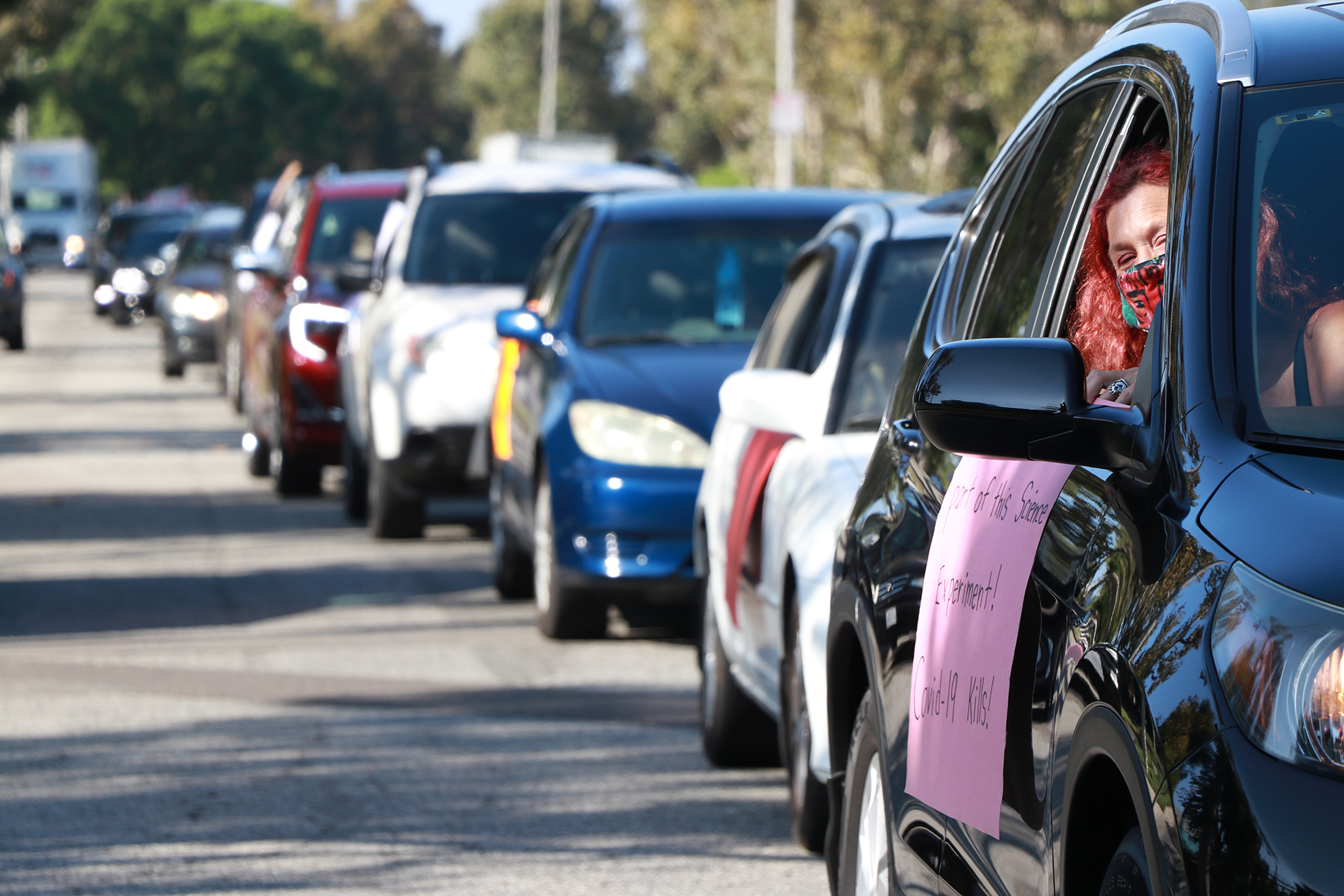 Parents and teachers line up on Via Oro Avenue as part of a car caravan Wednesday evening outside the Long Beach Unified School District headquarter during a board meeting. Photo by Crystal Niebla.

Many teachers say that they don’t feel comfortable working from empty classrooms because it might be a risk being exposed to other staff working on campuses.

The district says that working from a classroom setting will benefit teachers by providing them with the appropriate technology and materials.

The caravan, organized by Parents for Teachers of LBUSD, took place outside a school board meeting at LBUSD headquarters in the northwest part of Long Beach. Organizers said that parents and teachers are advocating for a safe reopening of schools, demanding for “safety and flexibility for all.”

Nubia Flores Cedeño, a parent organizer with Long Beach Forward, said flexibility is important to help reduce the spread of the virus.

“Teachers are also essential workers, but fortunately they can do their work from home,” Flores Cedeño said. “It is possible, and we’ve already done it once.”

Dozens of cars caravan on Via Oro Avenue and Carson Street in protest against #LBUSD asking teachers to teach virtual classes from empty classrooms. @LongBeachPost pic.twitter.com/iEZXEo49FE

With nonstop honking piercing the ears of anyone nearby, protesters repeatedly circle around LBUSD headquarters during a school board meeting. @LongBeachPost pic.twitter.com/H2ihjBoyNI

Editor’s note: This story was updated to include comments from parents.