Following a tour of the Terminal Island federal prison Tuesday, Congresswoman Nanette Barragán, D-San Pedro, said the conditions inside the prison fall short of the federal government’s responsibility to protect inmates during the COVID-19 pandemic.

“I’m very concerned about what I saw in there,” Barragán said during a press conference. “The bottom line here is the federal government has a duty and an obligation to protect inmates and their health.”

Barragán has been criticizing the Federal Bureau of Prisons since Terminal Island was revealed to have a widespread coronavirus outbreak that so far infected two-thirds of its inmates and killed seven. Family members of inmates have also been frustrated by a lack of information from prison administrators about whether their loved-ones are sick.

On Tuesday, Barragán said the first thing she noticed upon entering the facility was the lack of social distancing. In an attempt to separate prisoners, the facility is utilizing multiple tents and a warehouse building. Barragán likened the makeshift facilities to detention centers at the U.S.-Mexico border.

Isolation units are small and house two inmates each, Barragán said, adding that these are prisoners who have tested positive for coronavirus. Some asymptomatic inmates are housed alongside those with pronounced symptoms. One recovery area had approximately 75 inmates, Barragán added.

“It’s a prison. It’s extremely difficult to social distance within a prison because we’re limited to the confines of the perimeter fence,” said John Kostelnik, western regional vice president of the Council of Prison Locals, the union that represents prison employees. “Inmates, to the best of our ability, are being given the space to social distance, but they have a responsibility amongst themselves to property social distance.”

Another concern of Barragán’s is a lack of adequate face masks. She said inmate’s masks were “flimsy” and “falling off,” adding that she was provided with an N95 mask when she entered the facility. Kostelnik said certain masks, including the N95, have metal and plastic components that can be used as weapons or to pick locks on restraints, making them security risks. 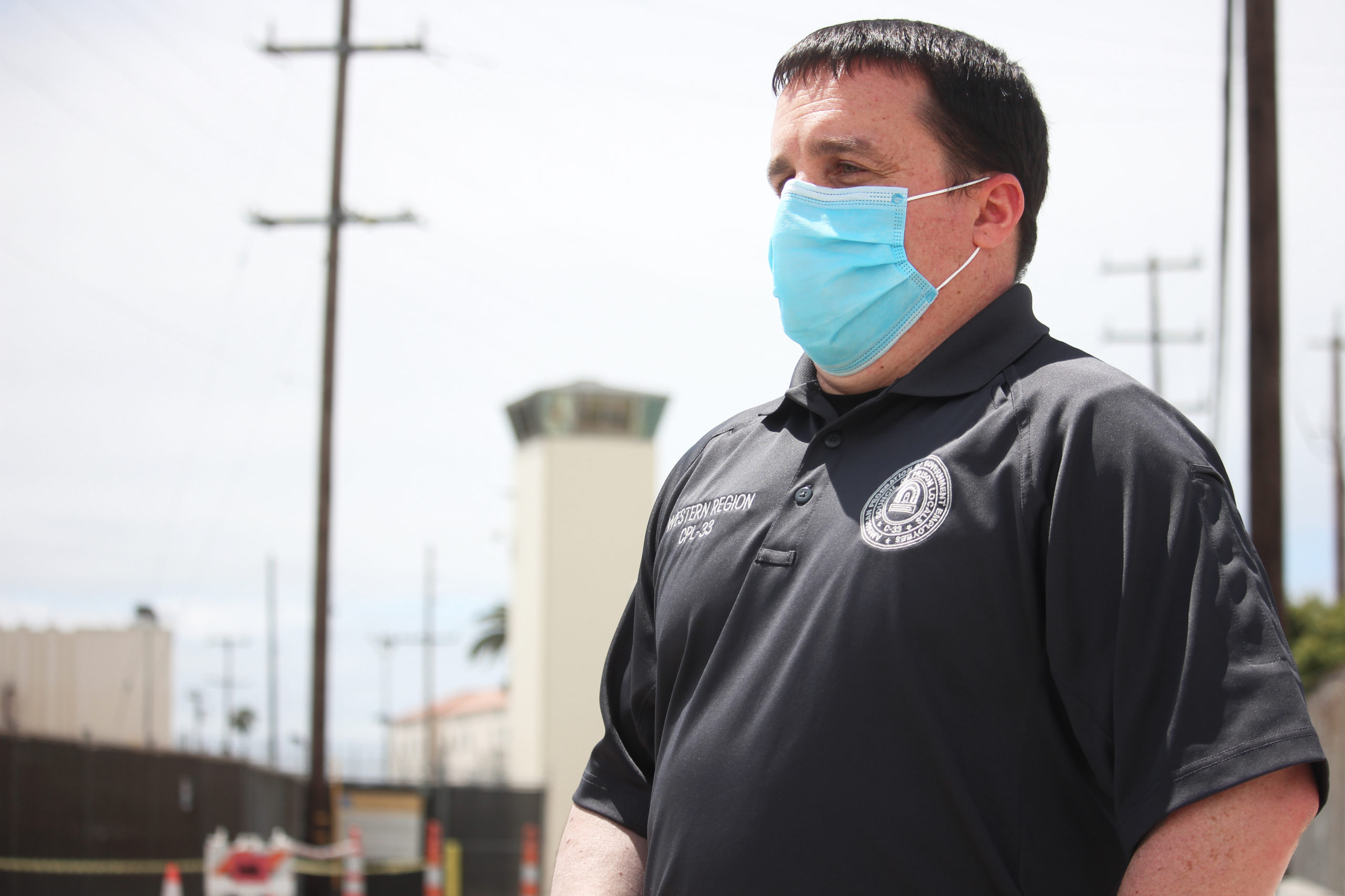 John Kostelnik, western regional vice president of the Council of Local Prisons, said some of Congresswoman Nanette Barragán’s comments following her tour of the Terminal Island federal prison were not feasible, such as providing inmates with N95 masks. Photo by Brandon Richardson.

For weeks, inmates were not allowed communication with family via phone or email to prevent spread of the virus in common areas. However, after pushback from families and elected officials, Barragán said inmates were allowed to start making calls over the weekend. However, because visitation is not allowed, she said inmates should have video conference privileges, which has not occurred.

The Terminal Island prison population is made up of 81% low-security inmates and 17% minimum security inmates. The remaining 2% of inmates are considered higher risk. Because of the low-security status of most inmates, Barragán said leadership should be making a more aggressive effort to transition a higher percentage to home confinement.

“We’re not talking about violent murderers. We’re talking about people who have a tax case or a drug charge,” Barragán said. Of Terminal Island’s 1,042 inmates, Barragán said 46 have qualified for home confinement and only six have received recommendations for that release.

The Attorney General recently introduced new factors to consider when reviewing an inmate’s case for home confinement in an attempt to increase the numbers approved and better protect inmates from coronavirus. Barragán said a second review of Terminal Island inmates is expected to be completed May 22.

Terminal Island has had 721 confirmed cases—25% of all federal prison COVID-19 cases—as of Tuesday, according to U.S. Federal Bureau of Prison data. Staff accounts for 15 of the positive diagnoses. According to Kostelnik, 100% of the prison’s 1,042 inmates have been tested for the virus at least once.

The only prison with more confirmed coronavirus cases than Terminal Island is the low-security Lompoc facility in Santa Barbara County, which has 971 cases and no deaths. Combined, Lompoc and Terminal Island account for 57% of all federal inmate COVID-19 cases in nearly 90 facilities nationwide. In all, 2,818 federal inmates have tested positive for coronavirus and 50 have died.

“These are human beings. They have made mistakes … but that doesn’t mean they should get a death sentence,” Barragán said. “[They] are going to go back into society and we want them to be productive citizens. We need to support them. If we don’t do that, if we don’t treat them with dignity and respect, then I think we all lose.”