Here we have a nice, historic 1953 Naples ranch-style home, a rarity in these days of three-story Naples homes, that is a desirable one-story residence on the water at 53 Rivo Alto Canal.

A house on the water is a fitting location for the home that has been lived in by people who have spent a good portion of their lives working on or near the water in Long Beach.

The home was built by Roy “Dutch” Miller, the famed founder of the Long Beach Lifeguards. Dutch became the lifeguards’ first captain in 1920 (after guarding at the Plunge bath house on the Pike for two years). During his tenure, Miller introduced several innovative concepts, including lifeguard towers, rescue boats, two-way radio systems and, because of his friendship with Hawaii’s Duke Kahanomoku, “The Father of Surfing” and five-time Olympic medalist in swimming, Miller brought Duke’s idea of using rescue boards to California. Dutch retired in 1966 after 48 years as a lifeguard in Long Beach. In 1981, the lifeguards’ headquarters on the beach at 2100 E. Ocean Blvd., was named the Dutch Miller Historical Lifeguard Station. 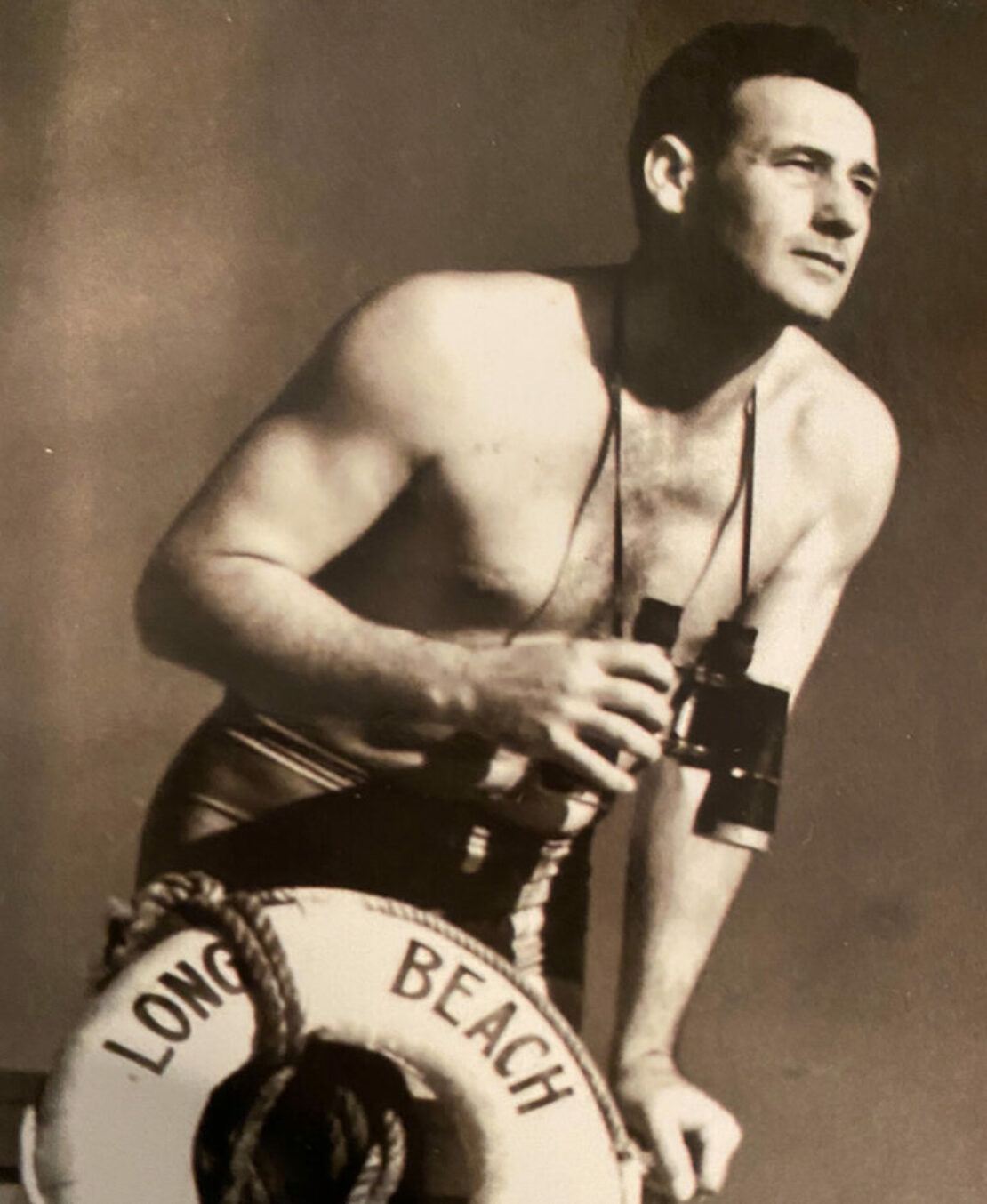 Dutch’s days were larger than life. He played for Poly’s legendary 1919 football team that won a state championship and then went on to beat Phoenix High School by the ridiculous score of 102-0. He was pals with Marion “Duke” Morrison before Duke became John Wayne. Dutch hired Duke, as a lifeguard on the strand in the 1930s and was best man at Wayne’s first wedding. Both Dukes—Wayne and Kahanamoku—were frequent guests at Miller’s home in Naples, according to Dutch’s grandson Jim Miller.

Though Dutch was king of lifeguarding, there were several other family members deeply involved in the royalty.  His brother Vic was his faithful lieutenant in the lifeguards and his son, Roy “Bunny” Miller Jr. also served as a lifeguard and held various other positions with the city for 33 years. The junior Miller was born on Easter Sunday and nicknamed “Bunny” by the nursing staff, and it stuck until his death last year at 92. His wife of 64 years, Jeanie, died shortly afterward. A red lifeguard chair dedicated to Bunny has stood in front of the house for years. 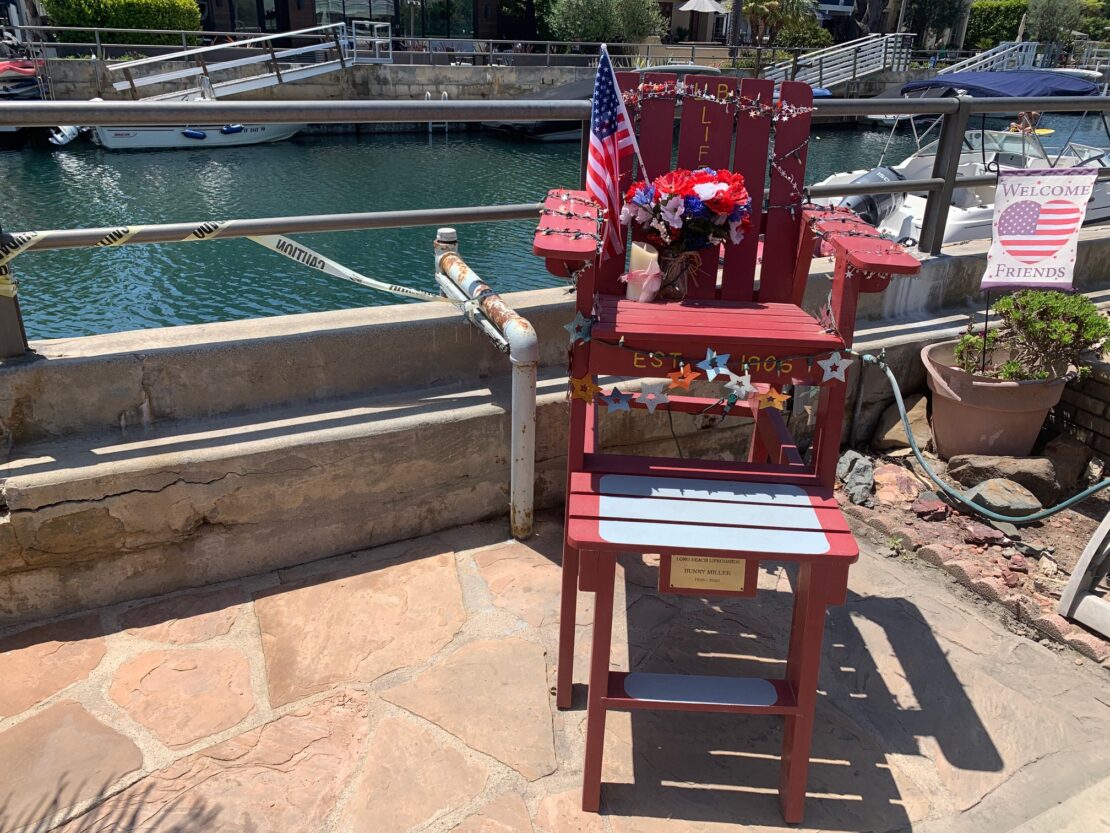 A red lifeguard chair dedicated to Bunny Miller stands near the dock at 53 Rivo Alto Canal. Photo by Tim Grobaty.

The couple had lived in the home on Rivo Alto Canal after Bunny’s parents died, carrying on the tradition of lifeguard reunion parties and other celebrations—most notably Fourth of July bashes and the annual UCLA-USC football game-viewing get-togethers.

“There were many, many great celebrations at the house,” said Dick Miller, Vic’s son and Dutch’s nephew. Dick, too, served several years as a lifeguard at the Colorado Lagoon before taking on a career as a teacher and swimming and water polo coach at Poly and then being appointed lifeguard chief in 1974. In 1984, he became Director of Beaches and Marine for the city.

Now, for the first time since the home was built, there are no longer any Millers living in it and it’s on the market, listed by Keith Muirhead at $3.75 million.

The Miller house is old-school Naples, a cozy and relatively small home at 1,641 square feet, built when people were happy enough to be on the canal, and residents spent sunny days outdoors in the front of the house, if not leaping off bridges and paddling around islands. It’s devoid of the opulent trappings you find in the more modern homes in the area: no travertine tile or marble flooring, no five-figure rarely used kitchen appliances; no chandeliers or walk-in wine closets. 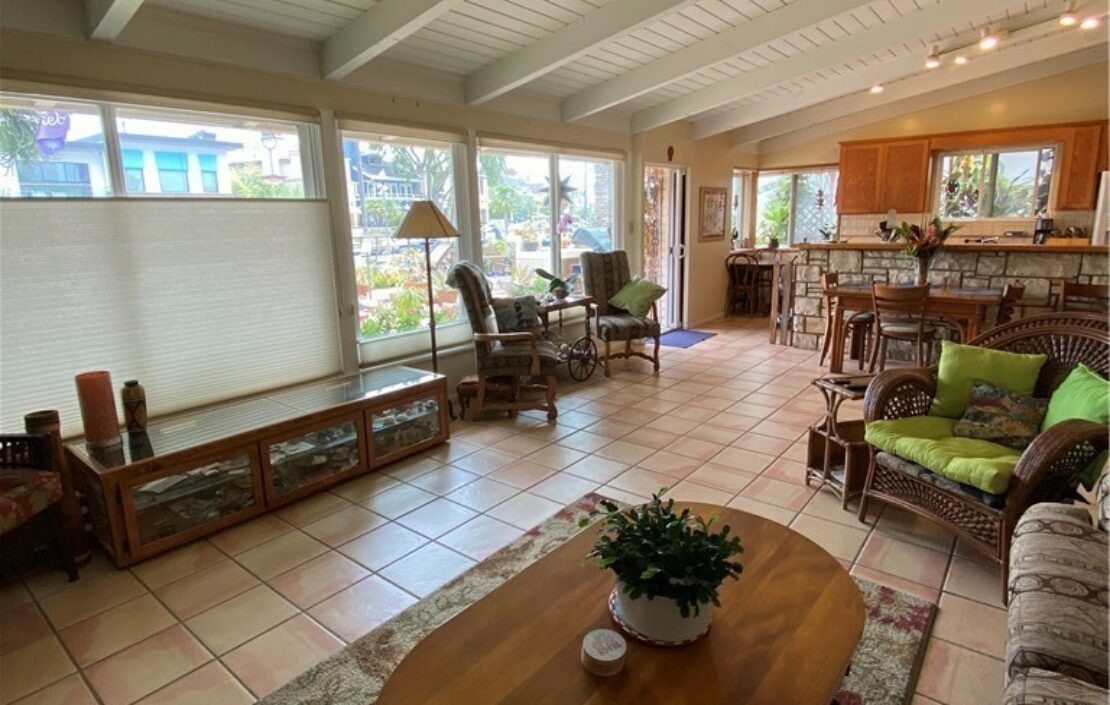 The living room looks out over the canal at 53 Rivo Alto Canal. Photo courtesy Keith Muirhead.

Rather, it’s the sort of house you would expect to be lived in by families of lifeguards—tile floors you can walk on right after you get out of the water, a nice wood-burning fireplace for the occasional nippy evening and a large flagstone patio out front with a built-in barbecue, bar and plenty of room for entertaining, along with a private 45-foot dock that can handle a fleet of water toys. It’s clearly a house that’s been well lived in and enjoyed, with no trace of its residents ever hankering for the wealthy trappings of the homes of its neighbors on Rivo Alto.

To me, those are all selling points, but it’s reasonable to fear that its next buyer won’t find its homeyness all that charming, so it wouldn’t be surprising to see the Miller home be demolished one day and replaced with something much more expensive and sadly sterile.

Still, it’s nice to hope that it will fall into the hands of someone who appreciates the simple and rewarding life of living on the canal and entertaining friends and family members in this home and limits their spending to just freshening the place up and maybe upgrading (but not over-upgrading) the kitchen and bathrooms and hanging on to one of the rare vestiges of the way life used to be lived in Naples.

“There’s a lot of history in the house,” said Jim Miller, Bunny’s son and Dutch’s grandson. “It was so much fun all the time, with everyone in the water and partying on the patio—the canal races on the Fourth of July when one half of the canal would race the other half. It’s been a great home. I’m gonna miss it.”