Anouska Ortiz sat in front of her computer staring at an unopened email from the Harvard University admissions department.

It was the email she had been anticipating since she’d applied for early admissions months before, and the moment she’d been waiting for since her freshman year, when Harvard moved to the forefront of her dreams.

Harvard first came onto Ortiz’s radar between her freshman and sophomore year, when a conference for the National Academy of Future Physicians and Medical Scientists led Ortiz to Boston.

It was only a two-day conference, and she didn’t even have time to explore the Ivy League campus, but just by standing in Harvard Square, she knew it was where she wanted to be.

Now that the moment was here, Ortiz couldn’t help but feel filled with doubt; she’s a first-generation student whose parents immigrated from Mexico. Growing up, she’d only known one person who’d gone to college, a boy in her North Long Beach neighborhood.

“It was just a little bit difficult for me to wrap my head around the idea that yes, I can; yes, I deserve to go to college,” said Ortiz. “But once I told myself, yes, going to college is attainable, you can go there, you deserve it, I’ve just been dead-set on going.”

As much as the desire to go to Harvard fueled her ambitions, when college admissions season came around, Ortiz questioned if she should even apply, considering Boston College and other schools in the area instead.

It was her AP European History teacher, Steven Meckna, that changed her mind.

“He was like, ‘No, you can’t just apply there, you have to apply to Harvard, they want you, you’ll be amazing there!’” said Ortiz.

He was the first person who confirmed to Ortiz that she could in fact achieve what she thought was impossible, and it was just the push she needed to apply.

“It was crazy how that one person just made me change my entire mindset about the college application process,” said Ortiz.

“I didn’t really know what college is, like what the process is, what financial aid is,” she said. “I had to teach myself how to navigate the school system.” 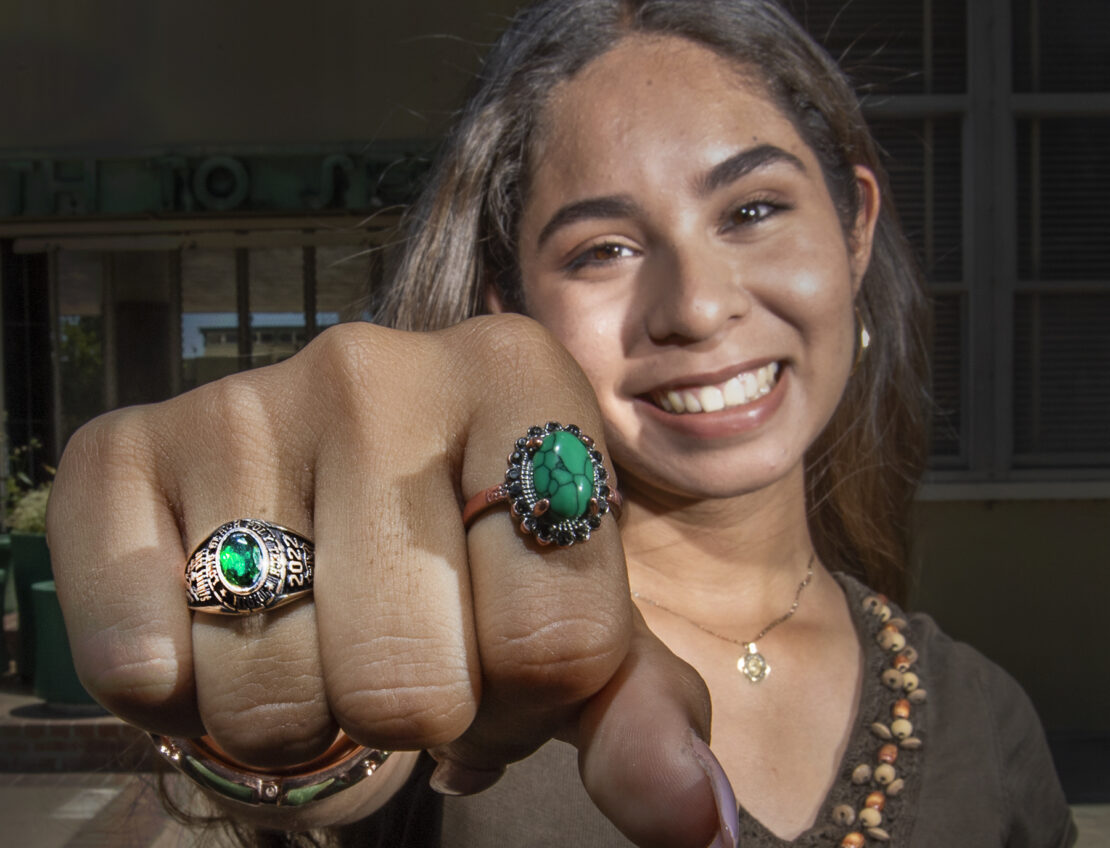 Anouska Ortiz shows her class ring while at high school in Long Beach Monday, June 20, 2022. Ortiz just graduated from Poly High School and will be attending Harvard in the fall.

Although the fact that Ortiz’s mother and father had a third- and sixth-grade education meant she had to forge her own path toward higher education, more importantly, it further inspired her to reach her goal of becoming a fetal surgeon (a dream ignited by watching “Grey’s Anatomy,” according to Ortiz).

“They had a childhood where they had to leave school behind in order to work to support their family,” said Ortiz. “I remember them telling me that they don’t want that for me.”

Ortiz credits her mother in particular, a tortilla distributor who often works from 3 a.m. until 3 p.m., with providing the most unwavering support to Ortiz, as well as becoming her biggest motivation.

And when Ortiz finally opened the email, in fact confirming that she had been accepted to Harvard University’s class of 2026, her entire family shared in her joy and emotion.

“The excitement that I’ve had since freshman year, it just all led up to that one moment, and I was just so incredibly nervous, and then when I saw the result, that’s when I just became the happiest ever, I just could not control my emotions,” said Ortiz. “I was crying, my mom was crying, my dad had confetti that he had bought a week before, my sister was crying, it was amazing.”

For Ortiz, who was finally achieving the goal she’d set for herself three years before, it was about so much more than her personal aspirations—but the dreams her parents had for her as well.

“I feel like I’m doing this for my parents who sacrificed so much to come over here, and although they may not know advanced calculus, or how to write an essay … they still provided endless support,” said Ortiz. “And this, I feel is just carrying the torch from what they did over 20 years ago when they first came to this country for a better life … and you know that when I take them over to Harvard, I’m for sure gonna brag about them like, ‘Yes, these are my parents,’ and buy them whatever they want from the merch store.”

Before Ortiz heads off to Boston in the fall to double major in chemical and physical biology as well as linguistics, in the meantime, she hopes to spend her summer studying French and a Mesoamerican language, Nahuatl, as well as practicing her cooking skills.

And as soon as she steps onto campus in August, she plans to head straight to the student resource center for first-generation student support, with plans to give back just like the many people in her life who have given her the same support.

“I want to see the success rate grow, and do my part in helping people like me, like Chicanos, go to college or graduate high school, or accomplish whatever goal they have in mind,” said Ortiz. “That’s the overarching reason, I just want to help people out.”

For Ortiz, her education won’t stop at four years, and she knows that the experiences, knowledge, mentorships, and friendships she develops through her time at Harvard will serve her throughout her life.

“My college experience will transcend into my career experience,” Ortiz said. “And I know that I’ll make lifelong friends there, and that I’ll learn new skills that will serve me in whatever stage of life that I’ll be in. College is just the first step.”