After posts on social media went viral in the last two weeks, Cal State Long Beach officials are once again under fire for their treatment of a 22-acre site along Bellflower Boulevard known as Puvungna, which is a historic and sacred site for indigenous people.

“I don’t know if the students of Cal State Long Beach just don’t know or they don’t care, but if you guys could share this. It could really help my tribe preserve a sacred site, thanks,” user In’yoni Felix says at the end of her video.

A viral Twitter thread with the same call to action has been retweeted more than 21,000 times.

CSULB’s Instagram account has been inundated with comments and university officials have been getting calls asking the university to address rumors of plans to build a parking lot on the land. A GoFundMe for legal expenses to be used in an ongoing lawsuit against CSULB has raised thousands of dollars in the weeks since the first video posted.

So, where did these suddenly viral activists come from, and what are they upset about? It’s part of a long history between the university and local Native American tribes.

Local organizer Michelle Castillo, who has protested at Puvungna, applauded Felix for fostering awareness of the issue that the community has been highlighting for years.

“Protect Puvungna has become a movement,” Castillo said. “The good thing about the TikTok is I feel like it’s reaching an audience that we feel like we haven’t been able to reach before: the youth.”

The university, however, says the video is misleading.

“There are no building plans for a parking lot or any other project at this location,” said university spokesman Jeff Cook.

But organizers point out the university is far from blameless. Last year, crews started dumping construction dirt on the sacred site and only stopped when people in the Native community protested and filed a lawsuit.

They point to statements by university officials that make them fear the land is not safe.

CSULB president Jane Close Conoley told the Daily 49er in September 2019 that a parking committee was considering using the area for 500 temporary parking spots at the beginning of the semesters and that an environmental impact review was still being conducted at the time. Cook said this week the university ultimately decided to not create a temporary lot, so no environmental review ever happened.

There’s also the broader historical context. The entire university is on land tribes consider to be part of Puvungna, which was a village and place of creation for the indigenous people who lived at the site.

The remaining 22-acre parcel is one of the few open spaces left on Puvungna. It’s also a nationally registered historic place where artifacts and human remains lie. Castillo said ancestor poles, which are akin to a memorial or grave marker, are on the land and families go there to pray.

The Juaneño Band of Mission Indians, Acjachemen Nation-Belardes tribe filed a lawsuit over the construction dumping in August in conjunction with the California Cultural Resources Preservation Alliance Inc., which supports sacred and archeological sites in the state. 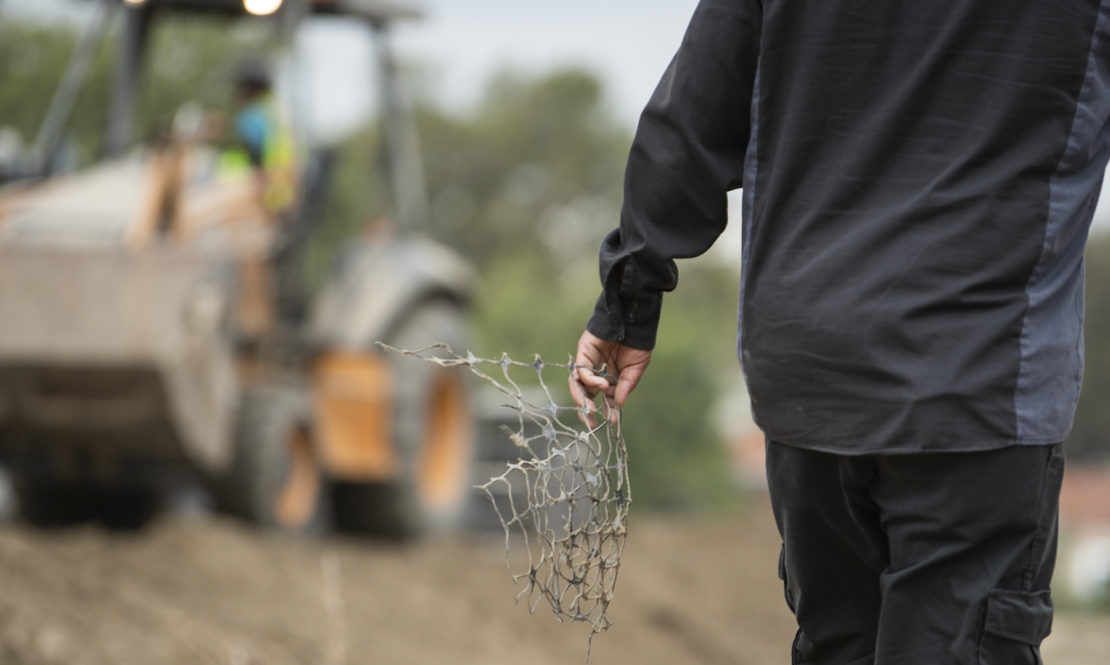 Ximalli holds a piece of fencing that he pulled out of the construction dirt as he joins protesters upset over crews dumping dirt at a sacred Native American site at Cal State Long Beach on Sept. 26, 2019. Photo by Thomas R. Cordova.

Patricia Martz, a member of the alliance, said, in an attempt to reach a settlement, CSULB offered not to build on the land for another 10 years. But they rejected that offer.

Martz also noted the university’s master plan refers to the land as 22 acres of vacant space and doesn’t acknowledge that it is a sacred or significant archaeological site.

Martz said she hadn’t heard of any plans from the university to build a permanent parking lot on the land, but she pointed to the university’s past actions, such as the idea for a temporary parking lot, as a foundation for that fear.

“The dumping was their crude attempt to cap the site so they could build on it, but that’s not the proper way to do that,” Martz said. “If that was an ordinary archaeological site, and they were a developer, they would be in a lot of trouble.”

The lawsuit is moving forward and their legal teams will expect to begin trial setting this month, she said.

Cook said the university hopes to begin planning for the final treatment of the construction soil and that the method they used to manage it was based on “counsel of Native American advisors to keep soil from campus here on site. The work was done under site-monitor protocols in place at the time.”

Nevertheless, the California Office of Historic Preservation, a state department tasked with preserving historic landmarks, criticized CSULB in an August letter for depositing the soil on the site and noted that the university only reached out to the office after it had already began dumping.

Cook said the university will “seek input from all community stakeholders, including members of the Native American communities,” in the longer-term planning process.

Meanwhile, those from the Native community just want the land cleaned and left alone.

Felix said there’s been broken promises in the past regarding Puvungna, “So how can we trust them to keep their word? It’s just going to be a cycle of trying to protect the land.”