In Los Angeles County, just 6,530 out of 4.8 million fully vaccinated people have tested positive for COVID-19, with 287 those cases requiring hospitalization. As of July 20, 30 fully vaccinated LA County residents have died from COVID-19.

People who were fully vaccinated with the Moderna vaccine were the least likely to have been infected with COVID-19, according to county data. As of July 27 just 0.09% of Moderna recipients tested positive for the virus compared to Pfizer (0.15%) and the single-dose Johnson and Johnson (0.27%).

Supervisor Sheila Kuehl shared her frustrations that the county continues to have to deal with “unvaccinated idiots” who she said she would like to nominate them for the Darwin Award—a fictional award typically given to people who die in unusually stupid ways.

“I don’t think they think for a minute the pressure they’re putting on our health care workers again who are already exhausted,” Kuehl said.

Despite breakthrough infections of those vaccinated, vaccines are showing promising results against the delta variant’s ability to cause serious illness and death. 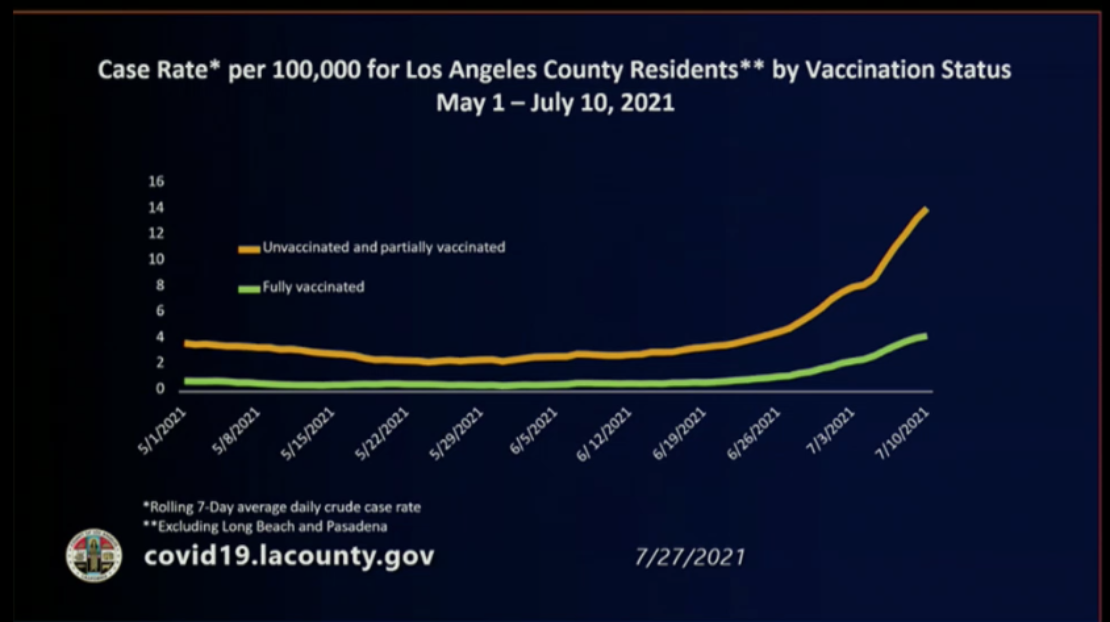 A graph presented to Los Angeles County Supervisors Tuesday afternoon showing the difference in infections between vaccinated and unvaccinated residents.

Ferrer pointed to the United Kingdom and Israel, two countries that are believed to be ahead of United States in the delta-variant surge, which both have high vaccine rates, high numbers of cases but relatively low death rates.

Two studies looking at the Pfizer vaccine in the UK and Israel show that it is 88% effective agains the delta variant and 93.7% effective against the alpha variant, the strain that was first widely detected in the UK.

Among those who were infected, the Israeli study showed Pfizer was 93% effective against hospitalization and 64% against symptomatic infections.

“These countries serve as an indication that widespread vaccination may serve to disrupt the surge,” Ferrer said.

The county instituted a mask mandate for all public indoor settings for vaccinated and unvaccinated persons earlier this month because of the growing breakthrough infections and it’s unlikely that it could lifted anytime soon.

The Centers for Disease Control and Prevention announced Tuesday that it would recommend all persons wear masks in indoor settings if they live in areas that have widespread COVID-19 infections like LA County.

Ferrer said the county is continuing to gather data on those deaths to determine what factors could have led to decreased vaccines efficacy but said that compromised immune systems, which can reduce a person’s ability to respond to a vaccine, could be one of the causes.

Several supervisors expressed support for mandating all county workers be vaccinated and could add the issue to an upcoming agenda.

The state announced this week that it was requiring state employees to be vaccinated or be subject to weekly testing and earlier Tuesday the Cal State University announced it would require vaccinations for all campus staff, faculty and students in order to access campus facilities this fall.

Mayor Robert Garcia announced Tuesday afternoon on Twitter that Long Beach would follow the city of Pasadena and others in requiring city employees to be vaccinated or be subject to weekly COVID-19 testing.

CSU to require vaccinations for faculty, staff and students starting in the fall

California to require vaccine or testing for state workers