Long Beach’s skilled nursing facilities are expected to receive the COVID-19 vaccine by the week of Dec. 28, bringing some relief to a vulnerable population that has been among the hardest hit in the pandemic.

“This is such a gift to our facilities who have been through such a brutal year,” said Deborah Pacyna, a spokesperson for the California Association of Health Facilities.

Early in the pandemic, nursing homes were an epicenter for the virus nationwide, with about 40% of all COVID-related deaths linked to long-term care facilities.

In Long Beach, roughly 1,800 cases and 165 deaths (more than 55% of total fatalities) are connected to the city’s 71 long-term care facilities. While the facilities saw some relief with lower cases in the fall, the numbers are once again exploding in this winter’s unprecedented surge.

As of Monday, about two dozen facilities had reported outbreaks among staff and residents, including many that already saw outbreaks earlier this year. 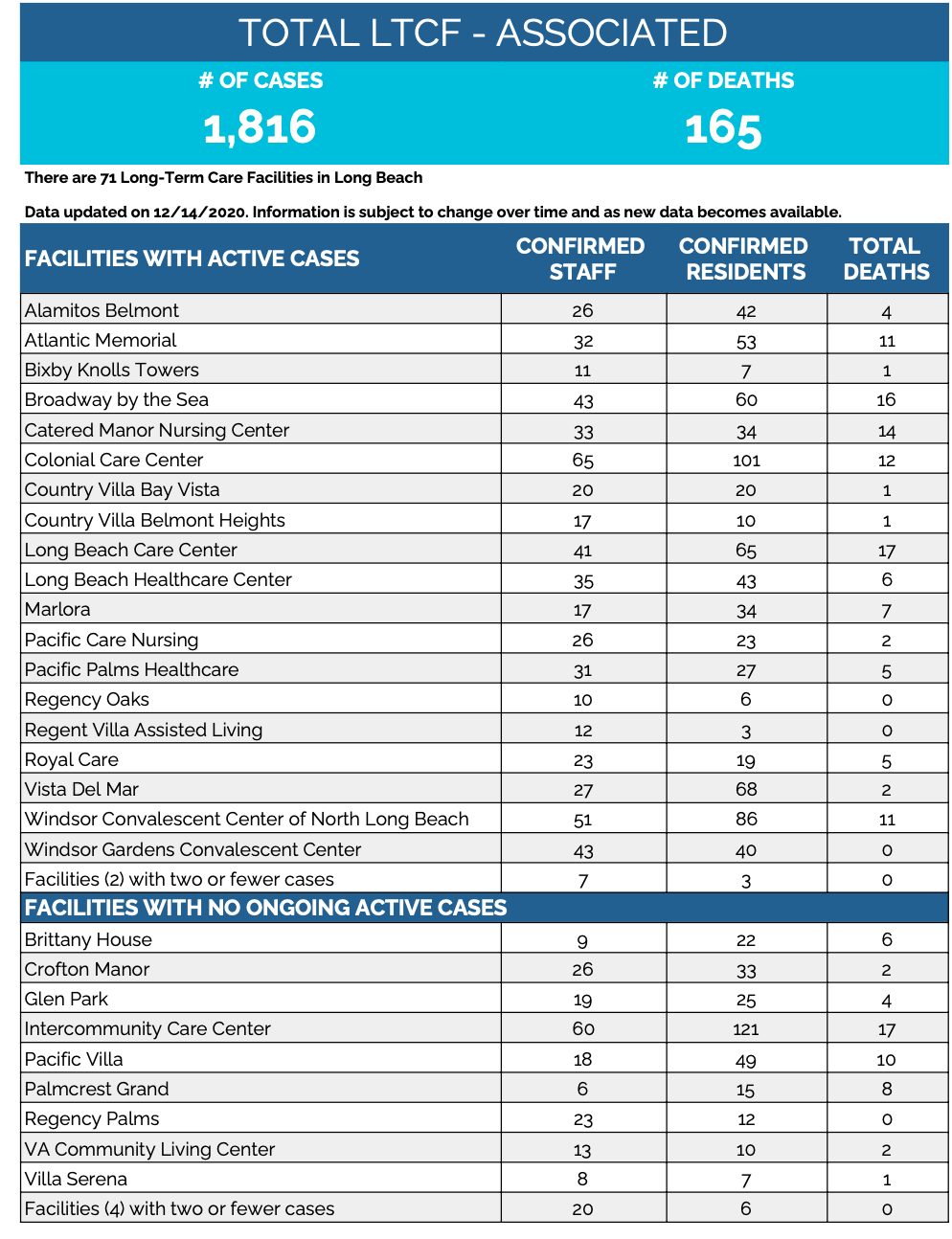 With the virus now surging in nursing homes, local health officials are scrambling to roll out the vaccine as soon as possible through a state pharmacy program under the Centers for Disease Control and Prevention.

Long Beach, which has its own health department, will administer the program in partnership with Walgreens and CVS, which will send teams to give the vaccine to both residents and staff.

Under the program, the pharmacy will conduct a total of three visits to each facility over the span of about two months. The vaccine must be given in two doses.

Rice Epstein said all of the city’s skilled nursing facilities have enrolled in the program.

“The program also covers assisted living facilities, but so far none of these facilities have enrolled,” she said in an email. “We plan to send vaccination strike teams to facilities that were not enrolled in the program.”

Long Beach this week is expected to receive an initial 3,900 doses of the Pfizer vaccine, which will be rolled out in phases starting with high-risk health care workers at hospitals including Long Beach Memorial and St. Mary Medical Center.

Skilled nursing facilities are next on the list, followed by emergency medical technicians and paramedics. The vaccine is expected to be available to the general public by next spring.

The pharmacy program wasn’t fast enough for Los Angeles County, which has opted to directly receive and administer the Moderna vaccine.

Public Health Director Barbara Ferrer said the county hopes to receive its second allotment of vaccine around Dec. 20. By sending the doses directly to skilled nursing facilities, the vaccine can be administered right away instead of waiting for a federal agreement with CVS and Walgreens to begin on roughly Dec. 28.

“We don’t want to wait until Dec. 28 to start the process of vaccinating residents and staff at skilled nursing facilities,” Ferrer said in a news conference this week.

Ferrer said public health officials on Friday began the process of training skilled nursing facility staff on how to administer the vaccination, while noting that those staffers already administer flu vaccines, so it is not a new experience.

Pacyna, with California Association of Health Facilities, said one challenge for nursing homes is consent, as many residents have dementia and are unable to give their own consent.

“A lot of our patients have representatives or stand-in orders,” she said.

Another common concern is that vital health care workers will possibly become sick and miss work from vaccine side effects. According the Food and Drug Administration, common side effects can include pain or swelling at the injection site, fatigue, headache, chills and muscle pain.

Pacyna said studies have shown that in most people, the side effects are minimal.

“No one is predicting that things are going to jump back to normal immediately,” she said. Masking is not going away any time soon and visitations will be a lot slower. But this is a start.”