Ineligible people have been able to sign up for vaccines, causing confusion and long lines • Long Beach Post News
- ADVERTISEMENT -
Help us light up the city; Add your home to the 2022 Holiday Lights map. CLICK HERE

Long Beach resident Jennifer Hill was excited last week to see that, as an educator, she would be eligible to get the COVID-19 vaccine soon, but when she emailed the city asking for more details and specifying that she is under the age of 65, she was surprised to get appointment registration links in response.

“I was all excited and I clicked the link and made an appointment,” for Jan. 20, said Hill, who works at Compton College. But then she saw on the city’s VaxLB website that educators under the age of 65 aren’t supposed to start getting inoculated until Jan. 25. She spent Tuesday calling and emailing the city’s vaccine hotline, but it was still set to a holiday response. Hill was left contemplating whether to just cancel her appointment.

The confusion surrounding who can get the vaccine and when isn’t unique to Hill. According to city officials, people who aren’t eligible yet are actually creating delays in vaccine lines, sometimes causing hours-long backlogs.

Unlike in Hill’s case, what’s typically happening is people are able to book an appointment before they’re supposed to because friends and family who are eligible have been forwarding along emails with registration links, city spokeswoman Chelsey Magallon said. The links will provide appointments to whoever fills them out, regardless of age or occupation. 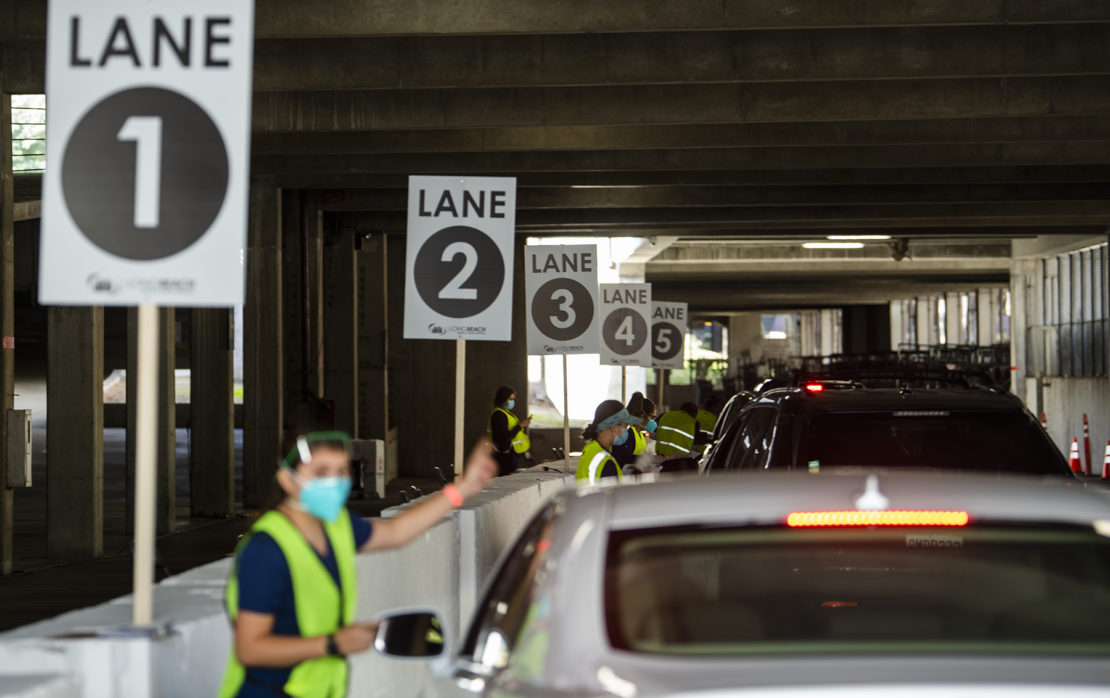 Long Beach officials touted a smooth launch of a new mass vaccination site at the Long Beach Convention Center on Tuesday, but at the vaccine clinic at Cabrillo High School last week, a line of cars stretched about a mile on Friday afternoon. Workers walked up and down the line checking that each person had appointments and their documentation ready, tagging cars with numbered sticky notes to keep anyone from cutting.

A city staffer at Cabrillo said they were catching a lot of people without proof they were in the correct tier and weeding them out. For those who fall into the 65 and older category, they’re asked to provide their birth date and proof of Long Beach residency, like a utility bill. For everyone else, they’re asked to provide a pay stub, work ID card or letter with a letterhead from their employer.

Despite the screenings, the line at Cabrillo was so long that some people reported waiting upwards of four hours. A woman’s car overheated and broke down in line. Others ran out of gas while waiting. One older couple had been dropped off by an Uber after having car troubles but then couldn’t get into their drive-up appointment.

“Good thing I brought snacks,” said Alexis Baker, who was waiting with her friend, a health care worker, for about three hours. The whole process was frustrating, the women said, but they were in good spirits on Friday.

Magallon said the site had longer wait times than others because of people arriving before their appointment time.

“Each site is prepared with an allocation to accommodate the number of appointments scheduled on a given day,” Magallon said. “The Health Department is working aggressively to administer as many vaccines as possible per State and CDC guidelines, but we are not overscheduling appointments.”

The vaccine sites will also sometimes turn people away with appointments if it’s close to dusk to ensure safety. A police officer at Cabrillo on Friday afternoon was turning away several people, who said they had appointments, because the site was “at capacity.”

One teacher, Isabel Almeida, said she and her husband were blocked from entering in the late afternoon even though they arrived early for their appointments. She said she got an appointment through a registration link from a friend who got it from someone at the city’s health department and believed she was allowed to get the vaccine.

While many at Cabrillo experienced long waits, for some it was relatively smooth. One health care worker said she and her mom were in and out within an hour and a half.

As for Jennifer Hill, the Compton College educator, Magallon said the city mistakenly provided her with a registration link and she would have to wait until Jan. 25 when the city starts vaccinating people in her tier. After getting that word, Hill said she promptly canceled her appointment.