Duke Givens, founder of Care Closet LBC, put out a call to the community on Sunday to collect the items. It was an emotional day for Givens. That same Sunday he received news that his twin brother, Devious Benton, died after battling cancer.

“I couldn’t cancel,” he said. “We cried, then I put my game face on and the overwhelming support helped me press through my brother’s pain.”

Care Closet LBC was created shortly before the pandemic prompted closures citywide. Since then, the organization has been moving an inch at a time as it tackles the surmounting issue of homelessness, Givens said. The nonprofit collected approximately 500 sleeping bags, hundreds of pairs of socks, shoes and other items of clothing and food at Sunday’s event. For the rest of the week, Care Closet volunteers shuffled through the items and sorted them into packages to be distributed to the homeless. 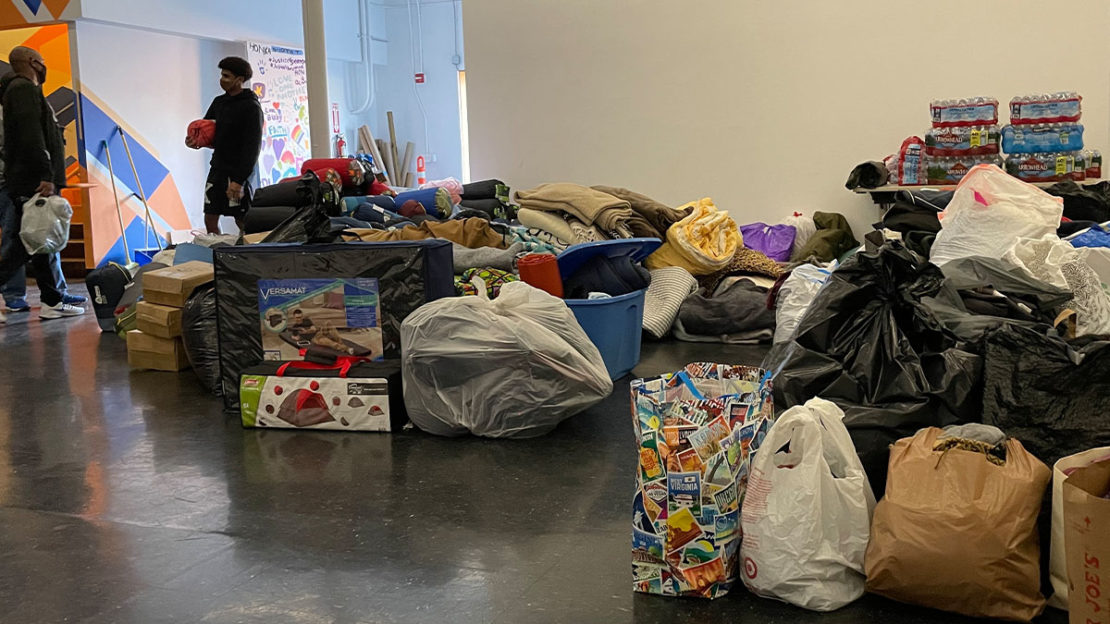 Sleeping bags, clothing and other supplies pile up inside the Expo Arts Center in Bixby Knolls at a homeless donation event hosted on Sunday, January 10, 2021. Photo by Sebastian Echeverry.

At one of the encampments Givens visited on Thursday, he distributed food, clothing and other supplies to a group of men who have been allowed to stay near an oil pumping site. The men said as long as they keep the area clean they can remain in a small camp there.

Homelessness continues to be one of the biggest challenges cities in Southern California face, as the unhoused population continues to grow. With the introduction of COVID-19, cities now find themselves fighting a public health crisis on two fronts.

Michael Gregoy, who lives at the encampment, said no other homeless individuals in the area have contracted the virus. He does, however, seem to have an infection on his legs, which worries Givens.

Rolando Gonzalez, who also stays at the camp, said a job and a shower are two of the things he wants the most. He said he was living in Alabama when he lost is job as a result of the pandemic. He moved in with his daughter in California, but a fight broke out between them, and since then he’s been living in the streets.

So far, Givens and his crew have been able to donate about 130 sleeping bags of the almost 500 he collected, with more efforts to give items away in the works.