‘We have your back’: Newsom urges voters to pass Prop. 1 at LBCC rally • Long Beach Post News
- ADVERTISEMENT -

Gov. Gavin Newsom told voters at a rally in Long Beach Sunday morning that passing a ballot measure codifying abortion rights would tell the rest of the nation that California would lead on protecting a wide array of civil rights.

“This is our opportunity to send a powerful message all across America,” Newsom said. “That we have your back.”

Newsom spoke before a crowd of about 500 supporters at the Hall of Champions gym at Long Beach City College. He was there as part of a series of Democratic Party rallies organized across the state in hopes of passing Proposition 1, which explicitly legalizes abortion in the state.

Democrats put the initiative on the ballot after the U.S. Supreme Court overturned Roe v. Wade in June, ending five decades of women’s access to abortion across the country. Since the court ruling, 14 states have banned or heavily restricted abortion access, according to NPR.

Newsom and others spoke of the Supreme Court’s overturning of the Roe v. Wade precedent as the first of many assaults on civil rights, including gay marriage and voting rights.

“We need to wake up to what’s going on in America,” Newsom said, before outlining a variety of challenges to civil rights across the county, including the banning of “1,651 books” this year by conservatives throughout the country.

All the nation’s progress on civil rights in the last half century “is now on the line,” Newsom said.

Earlier in the rally, the crowd gave California Secretary of State Shirley Weber a standing ovation after she drew a direct line between activists like Medgar Evers, who was murdered in 1963, and those fighting to strengthen abortion and voting rights today.

“What we’re fighting for, other people gave their lives for,” she said. 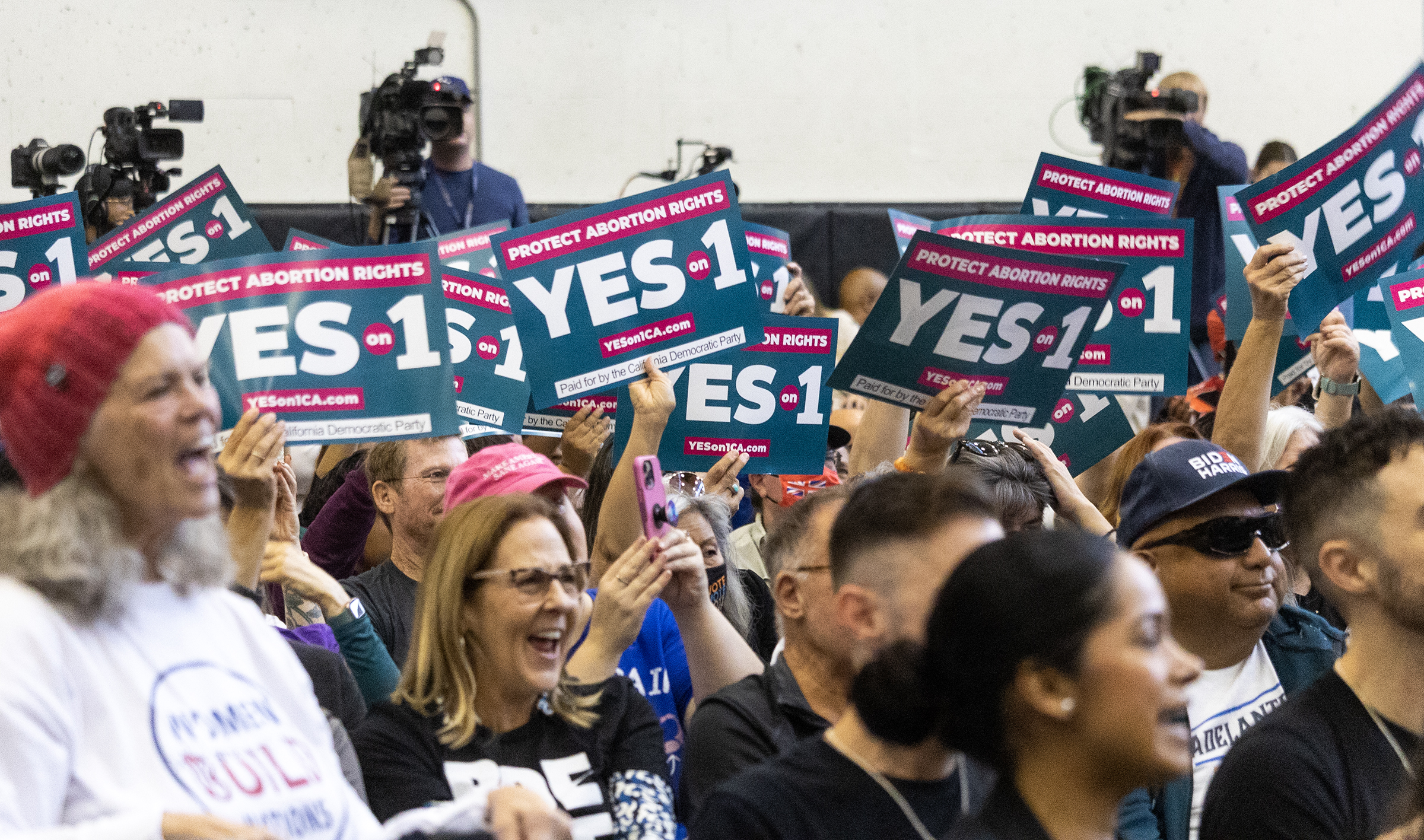 Long Beach Mayor Robert Garcia, who is running for the 42nd Congressional seat, called the Republicans who have been trying to end abortion rights “crazy” and said that while they’re focused on abortion today, “tomorrow it’s gay marriage.”

Jodi Hicks, president and CEO of Planned Parenthood Affiliates of California, told the crowd that they need Prop. 1 “to overwhelmingly pass,” to send a message to other states that have or are considering further abortion restrictions.

Nearly 70% of likely California voters support Prop. 1, while 61% of likely voters say the ballot measure is “very important to them,” according to the Public Policy Institute of California.

After the speech, Veronica Garcia-Conklin, a teacher from Westminster, said she was most impressed by Newsom’s insistence that we should not “go back to the 1950s.”

Another attendee, Nora Corralez, said she remembered when states banned birth control and it was illegal for women to get an abortion, and ended up hurting themselves so badly through unsafe procedures “that they couldn’t have children.”

Melissa Corralez, Nora’s daughter, said she’s never known anything in life other than life under Roe v. Wade. “I want to stand up for people younger than I am, so they can have the same rights I had,” she said.

During the rally, about 20 protesters, both for and against abortion, held signs and shouted slogans at the corner of Clark Avenue and Carson Street, near the college. One woman was arrested after she allegedly “forcefully stole” a sign from a protester, and was later released, pending a future court appearance, according to a Long Beach Police spokesperson.

There were no injuries reported, according to the LBPD.

Editor’s note: This story was updated with additional details from the LBPD.