Long Beach will break ground on a massive project that will connect the Colorado Lagoon to Marine Stadium through a new open channel that will increase water circulation to the lagoon and require traffic detours until the project is completed in 2024.

Improving water quality in the lagoon has been about a 20-year effort and a new $32.5 million effort will realign Marina Vista Park to make way for an 18-acre tidal channel that will replace the underground pipe that connects the lagoon to the ocean.

New bike and walking paths, a public viewing area, two vehicle bridges and the reconfigured park area with new sports fields are part of the project that city officials believe will provide the type of water circulation the existing pipe could not. Better water quality could also help support the restoration of marine habitats.

Construction of the bridges at Eliot and Colorado streets will require traffic detours for about 16 months, according to a project consultant. The city intends to start blocking off those streets to vehicle access around Nov. 28.

“This has been a long commitment from the city to improve the area and get the environment back to what it should be,” said Michelle Harati, a consultant working on the project. “It’s been a long time coming and hopefully with this disruption, in the end, they’ll have a beautiful product.” 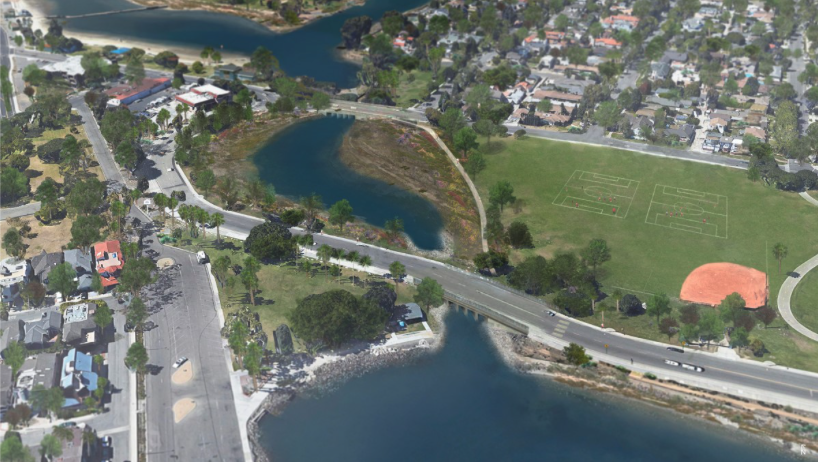 A rendering of the open-channel project that will connect Marine Stadium (bottom) to the Colorado Lagoon (top).

Harati said that one of the first steps will be to add sand into parts of the lagoon to sustain the growth of new eelgrass but then work will begin on excavating the channel and constructing bridges that will cross the new tidal channel at Eliot and Colorado. Construction of the entire project is anticipated to take about 24 months but vehicle traffic will only be affected for 16 months.

The City Council approved a grant application Tuesday night for an additional $1.5 million from the Los Angeles Rivers and Mountains Conservancy. The additional funding is needed because the original estimated cost of the project has increased due to inflation and lingering supply-chain issues, Harati said.

Part of the project will require the relocation of existing utilities to make way for the tidal channel and ductile iron is one of the materials that is in low supply, Harati said.

“It feels weird to say because we’re a ways away from COVID but the construction supply chain has not recovered yet,” Harati said.  “I think that’s something the city is experiencing across the board.”

The project is primarily being financed by the Port of Long Beach, which bought mitigation credits to offset future projects at the port. In total, the port put $32 million toward the project and the city contributed $539,205 from the Tidelands Fund. To improve its chances of receiving the grant, the city is committing another $800,000 from the same fund as part of the application.

Colorado Lagoon had consistently been ranked as one of the state’s dirtiest bodies of water until the city and other groups took steps to dredge the lagoon and install devices like the culvert to help keep it clean. Councilmember Suzie Price, who represents the area where the project is being built, said in 2019 that seeing it through was a big reason why she sought reelection.

“This is the first and only coastal mitigation bank in the state of California and as a result of the efforts by the city of Long Beach, the port of Long Beach and so many leaders who served before me,” Price said. “We are going to ensure good water quality for this city asset forever. This project is transformative and I am so proud to have been a part of it for the last eight years.”

Price is one of several city officials who will be on hand for the Nov. 11 groundbreaking ceremony. The event is scheduled to begin at 11 a.m. The city is also hosting a virtual community meeting Nov. 7. You can register for the meeting here.