We're out of our bunker, now bring us the budget • Long Beach Post News
- ADVERTISEMENT -

We flipped open The Backroom notebook after a three-month hiatus, and this is all that was scribbled on an otherwise blank page: “Gavin Newsom bobblehead.”

We can’t recall where we were going with this, maybe something cunningly humorous that would, because of recent events, be terribly tasteless now, but there actually is a Gavin Newsom bobblehead and it is, of course, stunningly handsome, and when you buy one for $25, $5 goes to the Protect the Heroes fund for health workers.

We’ve finally been forced to abandon our quarantine bunker 50 feet below Jergins Tunnel after one Backroomer told an hour-long joke about a horse who learns to play guitar in Signal Hill—spoiler alert: it ends, as do all good horse jokes, with “Why the long face?”—followed by weeks of infighting over a graffitied message calling for the “recall” of another ‘Roomer scrawled on a cherub-shaped terra cotta pot that led yet another ‘Roomer to accuse the first ‘Roomer of writing the missive himself in some twisted false-flag operation to gain sympathy for a coup to take control of the ‘Room’s dwindling supply of hydroxycholorquine. It was all very juvenile; we see that now, and we’re appropriately abashed.

But the view from above isn’t much rosier than our rambling jokes, tedious infighting and conspiracy theories that come from sniffing too many social media bath salts.

After toweling off, the first person we visited, naturally, was our beloved City Manager Tom Modica, who was halfway out his window at City Hall mumbling madly about pension obligations, one-time funding and something called the SERRF JPA Fund when we yanked him back to the safety of his 10th floor office.

It’s budget season, and, we surmised, it’s going to be ugly. The city is hoping to delay a legal ruling—and win an appeal—that prohibited the city from funneling millions in water fees to the general fund, the pot of money that pays for everything you care about.

Now, a few million would be nice money for us in the ‘Room—we could get a lot of black-market pedicures and PPE for that sum—but the city is grasping at every dime—even a sum that amounts to 2% of the general fund—to avoid calamitous cuts.

We’re afraid it gets worse. City leaders will both have to reconcile this year’s 2020 budget—which is estimated to be about $41 million short of expectations—but also figure out how to plug some big holes in next year’s financial plan, because that plan has more holes than all of Trump’s golf courses combined.

The city is going to have to make some extraordinary cuts and/or find ways to bring in way more revenue. We thought we’d help Modica by offering some suggestions before the 2020-21 budget is released on Monday.

Right off we’re tempted to get silly about this: Selling the Queen Mary for scrap, or carving it up into souvenir key chains—or is that deal with Hong Kong dragging it across the Pacific for a tourist attraction still on the table? Constructing a waterpark on the oil islands, connected to each other and the mainland by zip-line. Maybe scooping out a healthy heap of dirt from Signal Hill—the future Signal Valley—to infill the harbor for more pricey waterfront property.

But these are serious times that call for serious solutions.

In the midst of a global pandemic and police protests across the country, we imagine the group’s slogan to be: “Everything was fine when we left.”

It’s politics season, it’s weird, we’re frightened—and we’re still three months out from Election Day. That clown making balloon swords for kids at a birthday-themed party on Sunday for the mayor’s recall effort was enough to send us scurrying back to the warm embrace of the quarantine bunker. 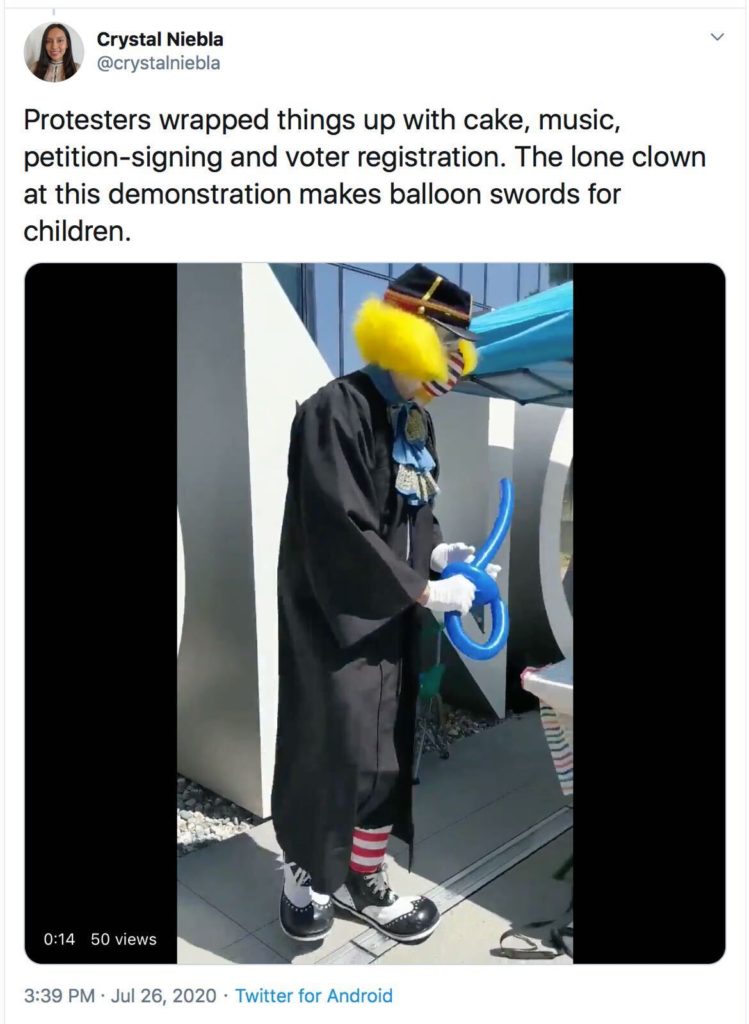 There’ve already been accusations of renters being stalked at an Orange County home owned by Cindy Allen, who is running against Robert Fox for the privilege of representing the city’s 2nd Council District. And there’s the daily onslaught of name-calling and bullying from the Facebook MENSA Commentariat, who get angrier the more they’re ignored.

We were not quite stunned (it’s a high bar these days), yet somewhat surprised to learn that outgoing Councilwoman Jeannine Pearce will host a Zoom talk Thursday night with Cindy Allen to discuss “community priorities.”

Pearce, as you’ll recall, supported Eduardo Lara as her replacement in the primary. She shopped at least one other candidate in her bid to upend the establishment, which was firmly behind Allen.

We suppose that’s just politics. It’ll be interesting to see where Pearce lands after her fraught term on the council ends this year.

There’s never been a better time to open a restaurant. The Backroom Bistro is now serving up a delicious array of offerings.

Each week we’ll announce our sandwich of the week, and this one you’ve gotta try: The Gary De-Foot-Long, served on two slabs of white bread and stuffed with bologna.

Enjoy it on the rooftop gym of Iconix Fitness, your home gym, or wherever you darn well please, because freedom.