Long Beach has so far distributed more than 44,000 doses of the COVID-19 vaccine, and the majority of them have gone to older, White residents on the city’s east side, where rates of the virus are the lowest.

One of the reasons for the inequity is that fact that people over 65 have been prioritized because they are more likely to fall ill and die from the virus, even though they contract COVID at lower rates. And in Long Beach, residents on the east side tend to be White and older.

Frontline health workers, police and firefighters were in the first eligible groups, followed by those over 65. Newly eligible groups are teachers and food workers.

Health officials are struggling to reach communities of color and densely populated areas where the virus has been most rampant. 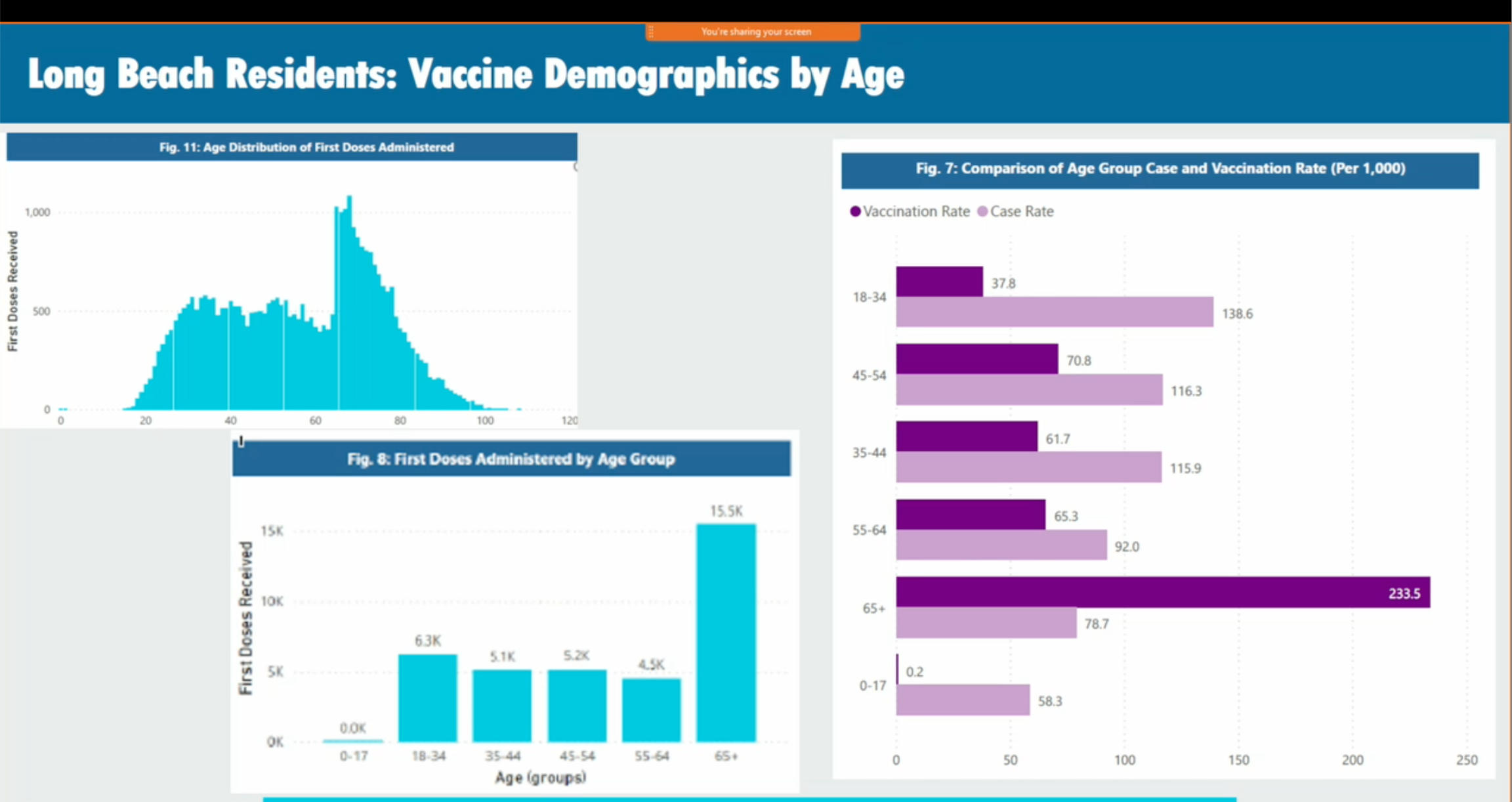 Although vaccination programs are in the initial stages—cities and counties everywhere have struggled to get vaccine supplies—early data show that those who live in areas where cases are the highest are not getting the vaccine.

California is not yet reporting data by racial and ethnic groups, nor is Los Angeles County. State and county health officials said they hope to release that information next week.

“We remain concerned that we will see, as we have seen with distribution of other health resources, a difference in race and geography,” Barbara Ferrer, director of the county Department of Public Health, said Wednesday at a media briefing.

Ferrer said the areas of prioritization have been adults over 65, as this group accounts for roughly 60% of all deaths from COVID-19. Protecting people with a high risk of contracting the virus, such as food workers, is also a priority.

“We are trying to protect the most vulnerable with the goal of reducing mortality,” she said. “It means understanding who is most likely to die.”

North Long Beach, meanwhile, has the highest disparity in cases-to-vaccinations, with 131 people per 1,000 contracting the virus, versus 47.1 people receiving the vaccine. 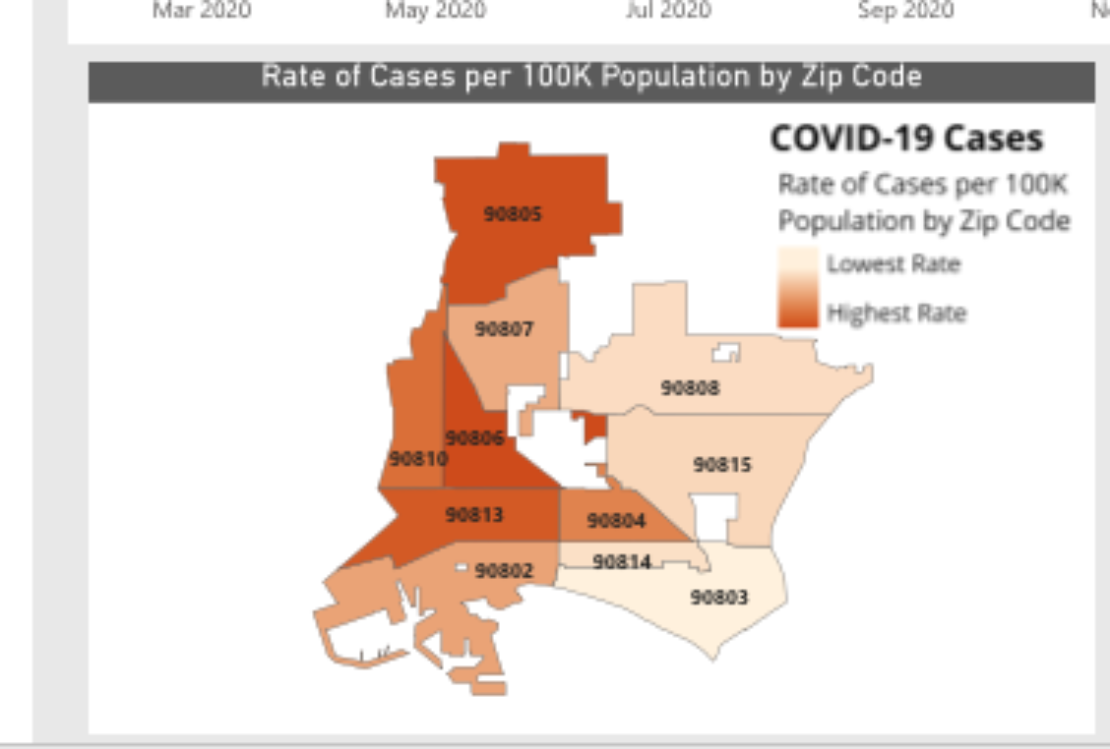 The same disparity can be seen when the numbers are broken down by race.

White people have a much higher vaccination rate compared to people of color, receiving nearly half of all first doses at more than 14,000. 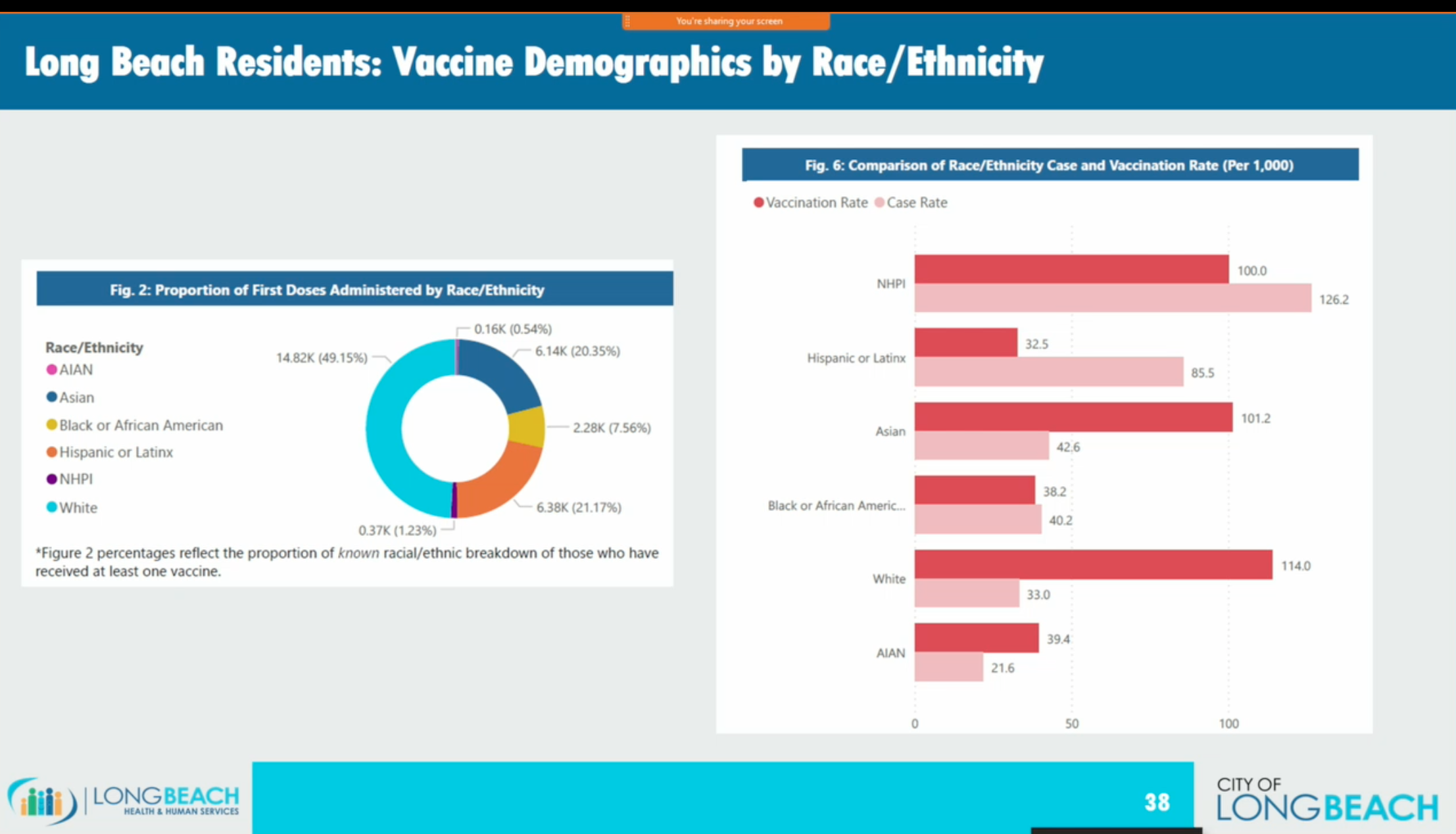 Long Beach Health Department Director Kelly Colopy on Tuesday said the racial and neighborhood inequities in vaccine rollout are reflective of the population, noting that about 55% of residents age 65 and over are White and live in the eastern part of the city. Long Beach’s residents of color tend to be a younger population and live in more denser areas of the city.

Nonetheless, she said the city data shows concerning disparities in vaccine distribution and that the city is working on a number of efforts to focus on equity.

Colopy said disparities are complicated by layers of race, poverty and access. Many people in the inner city may not have access to transportation to vaccine sites or internet access to sign up for vaccine notifications. Many of the city’s Latino residents are immigrants who may be mistrustful of the vaccine or government involvement.

The city in the coming weeks will work on outreach with five local nonprofit groups to target high-risk communities using census tract data that shows neighborhoods with the highest rate of COVID cases, she said.

The effort will include mobile vaccination clinics in neighborhoods and information campaigns in Spanish, Khmer and Tagalog.