This is the first in a series looking at real estate in the city’s different ZIP codes.

Today, we’re embarking on a ZIP tour of Long Beach, exploring real estate in a dozen of the city’s inhabitable ZIP code areas, starting from my suite of offices in the 90802 ZIP that covers the coastal area of Downtown Long Beach.

The area consists roughly of the neighborhoods between the Pacific Ocean and Seventh Street and from the LA River and the harbor to either Junipero Avenue (south of Broadway) and Cherry Avenue (north of Broadway.).

It includes, besides Downtown, the neighborhoods of the East Village and Alamitos Beach. Its area also encompasses the Aquarium of the Pacific, Shoreline Village, the Long Beach Convention and Entertainment Center, Rainbow Lagoon and the Pine Avenue Pier. The ‘02 and the 90803 ZIPs are the only two in Long Beach that touch on the Pacific Ocean and so are able in many cases to employ the “steps to the beach” boast in real estate listings.

It’s both a dense and lively area with many of the city’s finest restaurants. With retail businesses in the area having diminished over the past few decades with the collapse of major shopping centers, preceded by the closure of major businesses along Pine, there are few shopping opportunities other than down South Pine, with the Pike Outlets.

The area earns a mighty 90 in WalkScore, the highest in the city, though caution is advised, especially at night when crime isn’t unusual, and even daylight-hour strolls may require some vigilance as well. A  2022 survey conducted by the Downtown Long Beach Alliance showed those who felt “completely comfortable” in Downtown between 7 a.m and 2 p.m. had dropped to 40% from  62% in 2019.

However, 79% of respondents felt “completely comfortable” and “fairly comfortable,” and 70% of those surveyed said they were likely to recommend visiting Downtown to a friend or colleague.

With 39,165 people living in the ZIP of 6.5 square miles, the area’s density is a moderately high 6,025 people per square mile, and that density is reflected in the ZIP’s housing makeup, which is largely vertical. Condominium complexes and high-rise apartment buildings hug the coastline’s real estate offerings, with sale listings bending toward condos and apartments.

Condominiums range from seven-figure penthouses with plush amenities and ocean views along Ocean Boulevard to tiny studios in neighborhoods west of Pine Avenue. There’s one on West Fourth Street, for example, that’s a 372-square-foot studio with a list price of $209,000. At the top end is a 2,154 two-level three-bed, three-bath penthouse on the Promenade listed at $1.86 million.

Between the extremes are some venerable and historic Long Beach buildings such as the Sovereign, the St. Regis, the Cooper Arms, the Lafayette complex and the Villa Riviera.

As for detached single-family homes, your choices are narrow: Only about 7% of the structures in the 90802 fall into that category, with the majority of them in the eastern part of the ZIP, in Alamitos Beach. Virtually no one is building new homes in Long Beach, especially in this ZIP code, where new homes haven’t been built for decades. The three houses we’ll look at today were built between 1904 and 1918.

On the market now is a two-bedroom, two bath California bungalow priced by listing agent Andrea Bigler about midway between the 90802 median and the citywide median at $659,000. The home is on a corner lot at Tile Avenue and Florida Street in Alamitos Beach’s “gayborhood,” about equidistant from the  bars on Broadway and Fourth Street’s Retro Row. 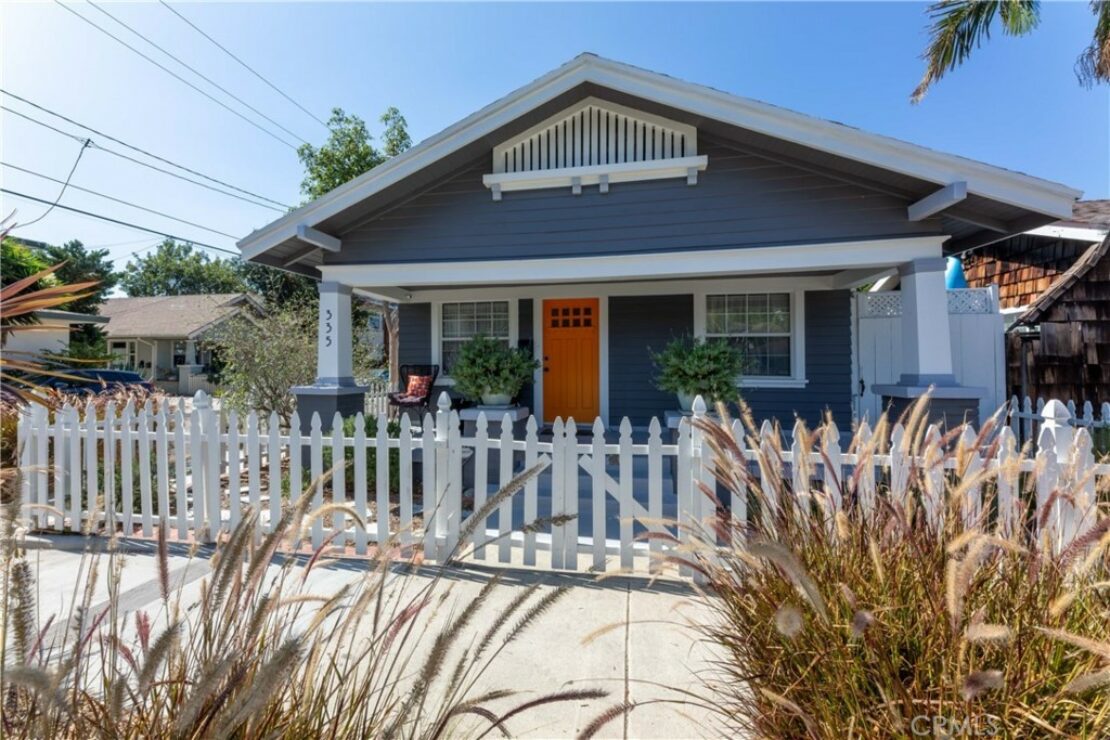 The home is surrounded by a white picket fence—a trademark feature of your basic American Dream house—and inside, the living and dining areas are bright and relatively roomy. The kitchen is cheerful, thanks to new cabinetry and some striking bright blue tilework.

A bonus touch is the fact that the home’s two bedrooms each have their own attached bathroom, both with vintage-looking tile.

And it’s no small matter that, in this neighborhood where parking is a perennial concern, the house has a detached one-car garage and a driveway for off-street parking. The money you save on street-sweeping tickets will go a long way toward paying your mortgage.

Next, here’s a 1904 bungalow at 532 W. Fifth St. built during the Theodore Roosevelt administration, in which the listing Realtor claims the buyer will live “just over three blocks to FUN in the sand.” It’s maybe a little over three blocks to the LA River, where you’re not likely to find much in the way of FUN, but if it’s sand you’re looking for, that’s about a mile and a half away at the foot of First Place off Ocean Boulevard. 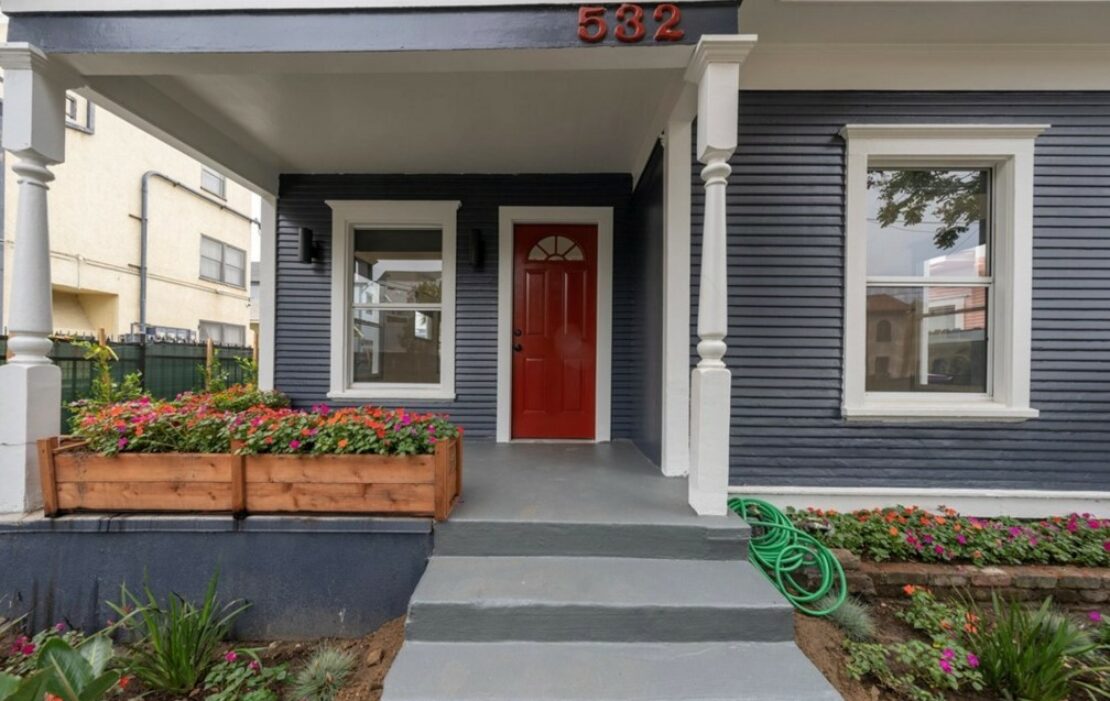 It’s still not a bad home for the west side of Pine, with a nice large porch, a good-luck welcoming front door and a bright and open living room and dining area. The kitchen is modern with wood floors and updated appliances.

Other upgrades include ductless air-conditioning and new flooring and lighting. Perhaps because the home was built about five years before Model T Fords began coming off the assembly line, there’s no garage, just street parking. The 825-square-foot home is listed by Narine Chobanyan at $689,000. 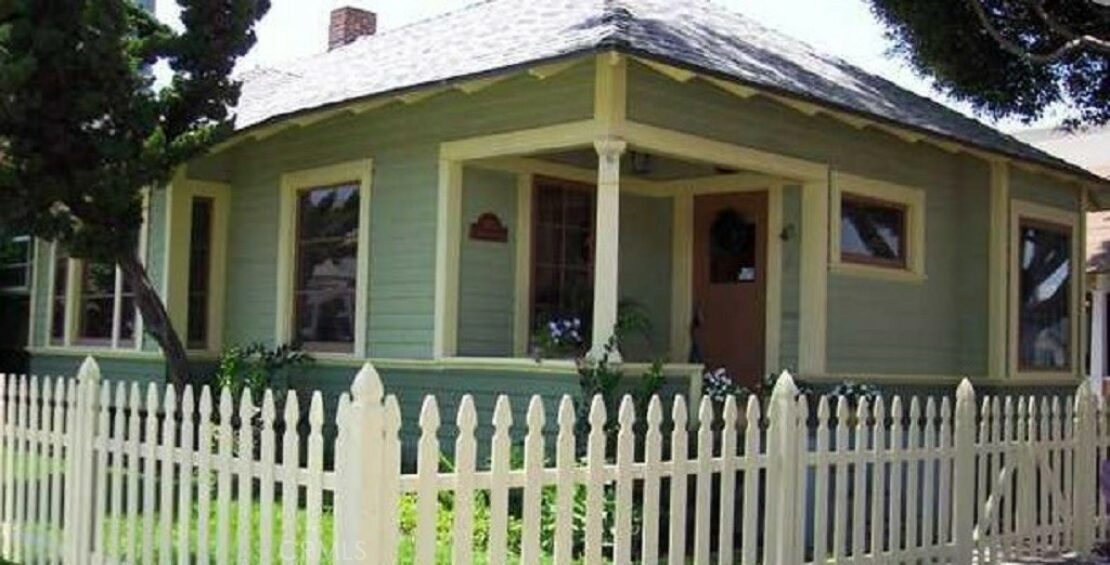 A two-bed, one-bath home on East Appleton Street in Alamitos Heights is listed at $920,000. Redfin photo.

It depends what you want. This corner-lot house is right next door to the Falcon bar, if that’s a selling point. And it’s closer to the beach than the other two, and according to Zhang, the previous owner has poured about $100,000 into gussying the place up. And, even with just two bedrooms and a bath, it’s the largest of the three homes at 1,104 square feet, which is plenty spacious, and even more so if you count cubic feet, thanks to 9-foot ceilings.