This is the fourth in a series looking at real estate in the city’s different ZIP codes. Read our last edition about the 90804 here.

The 90805 ZIP code taking in North Long Beach, aka Northtown, J-Town or the Northside, is the last frontier for new home buyers in this city, with houses generally priced at least $100,000 lower than in most of the other ZIP code areas in Long Beach.

The area hasn’t wandered too far from its roots when North Long Beach began becoming part of the city of Long Beach, with annexations of portions of the area starting in late 1923 and continuing through 1931.

The area grew rather rapidly, as did much of the city, with the oil boom in the early 1920s. Prior to the discovery of oil, the area was almost exclusively agricultural, with large fields of sugar beets and asparagus, along with vast tracts of dairy farms. According to local historian Claudine Burnett, about 700 people lived in the area up north that was made up of small towns and tracts with names like Clearwater, Cooperative Colony, Glenville and Hynes. By 1927, 5,000 people lived in the area and residential construction began.

The area has several parks, ranging in size from the DeForest Park & Wetlands taking up nearly 50 acres along the LA River, to the Atlantic Plaza Park, a 1.5-acre bit of green space in the Carmelitos housing community.

Other large recreation areas include the 26.4-acre Houghton Park, the site of most outdoor civic gatherings in NLB, and the 26.1-acre Scherer Park.

For years now, the Uptown Renaissance has been touted as bringing the area up to date with vibrant shopping opportunities as well as an increase in amenities that have been lacking in the area, such as banks and sit-down restaurants. While that hasn’t resulted in an explosion of progress in terms of drawing in people from the south, there has been a touch of gentrification in parts of North Long Beach, something on which locals tend to teeter between dread and encouragement and, while homes in the area tend to be less expensive than its neighbors in the southern and eastern parts of town, the prices have been increasing in value at a similar rate, just lagging behind in the high end.

A million-dollar house, while boringly common in many parts of the city, is rare in North Long Beach and usually includes more than four or five bedrooms on an extra-large lot, especially in horse country up in the ZIP’s northwest corner between Atlantic Place and the LA River.

Here are a few homes in NLB currently listed for sale: 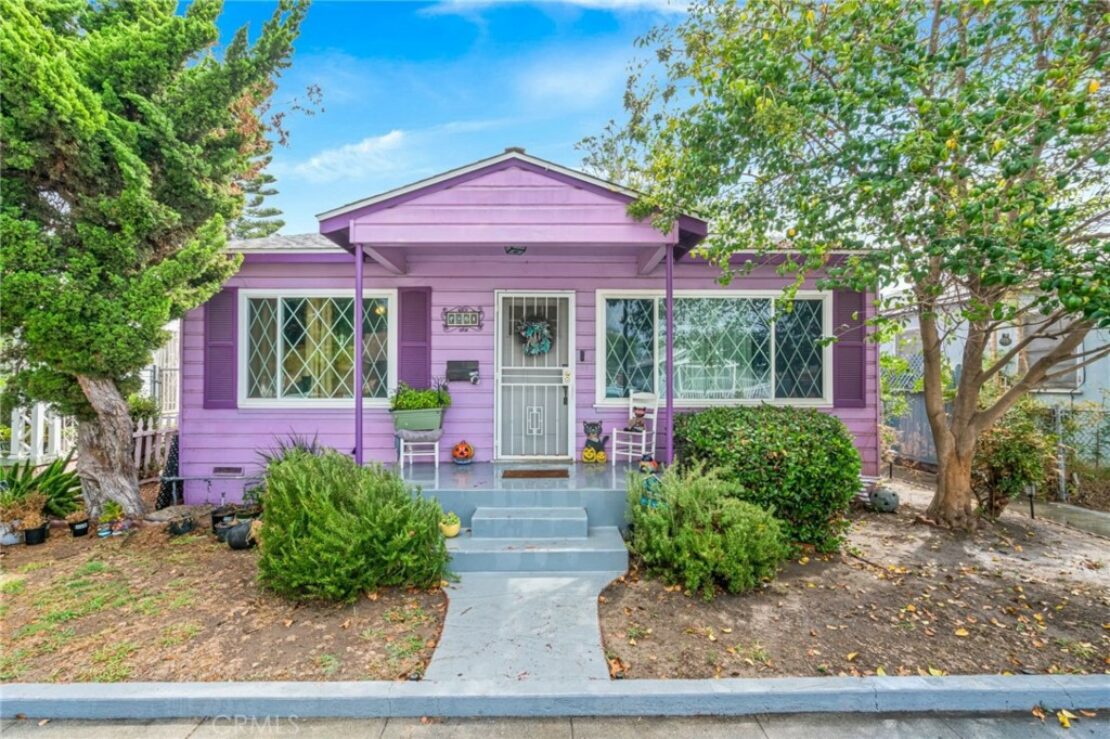 A home for fans of Prince, eggplant or the Minnesota Vikings. On Cerritos Avenue. The home is listed at $617,000. Listing photo.

This home at 5470 Cerritos Ave. in the Lindbergh neighborhood is best described as purple. It’s more purple than it is large, with two bedrooms and one bath taking up 982 square feet. The fact that it’s been on the market for more than two months might tell you something about homebuyers’ feelings about purple houses. And there’s little escape from the hue once inside, as one of the bedrooms is painted a relentless shade of purple.

Still, if you can get past that—and, remember, painting is a viable option—it’s a nice little house for a couple or small family. A dog, too, will have a blast in the fairly large backyard with lots of grass, broken up by a brick patio.

The house has some recent upgrades, including a newer roof and windows. Just off the kitchen is a dining nook, which would be described as a breakfast nook if the house included a dining room.

There’s a detached garage with alley access and a separate water heater with laundry hook-ups. 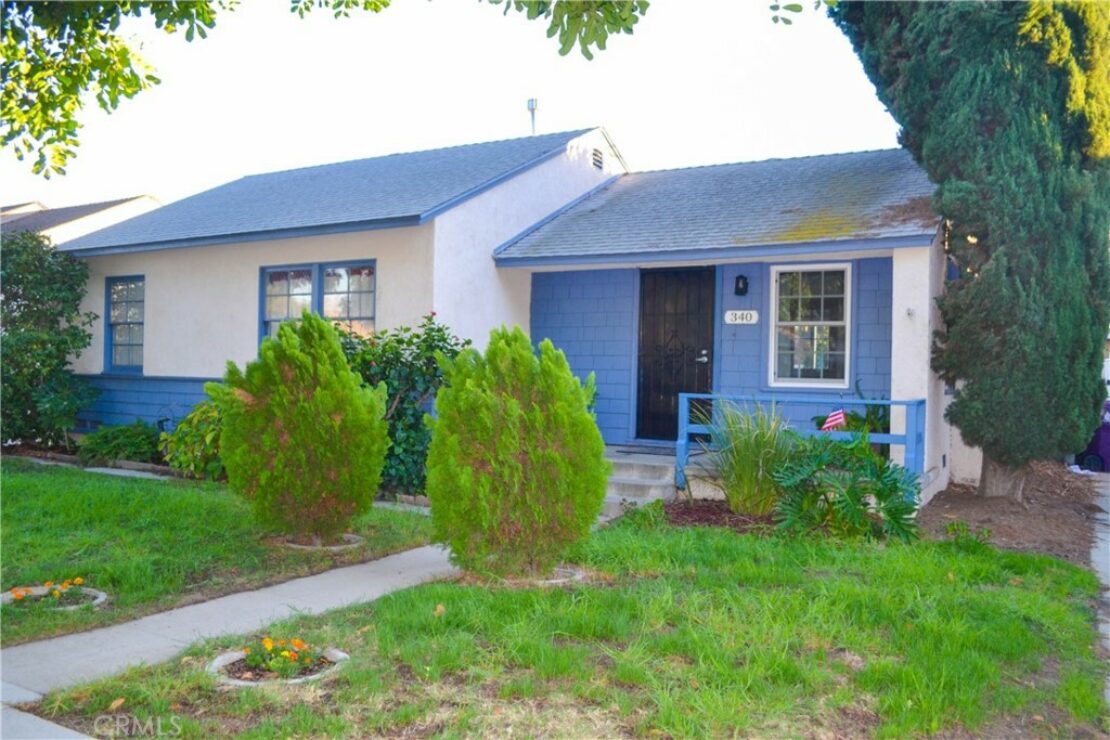 Next on the color spectrum, we have a blue house at 340 E. Harding St. It’s a great location if you like recreation. This three-bedroom, one-bath home is just two houses from DeForest Park and the LA River, and only a couple of blocks from Houghton Park and its frequent neighborhood and citywide events. You’ll be able to hear the Uptown Jazz fest from your large backyard that’s perfect for entertaining with a patio and large grassy area.

The curb appeal is excellent showing off the home’s front porch that leads right into a handsome living room with oak hardwood floors.

The kitchen is ample-sized with lots of cabinets for storage.

The home has a rear detached two-car garage. The house is listed by Sindy Verdugo at $664,500.

As you move to the eastern part of the 90805 close to the border of Lakewood, the homes get a little nicer, a little bigger, a little pricier.

This large home on Poppy Street near the Lakewood border is listed at $800,000. Listing photo.

This home at 3800 Poppy St. is a quick stroll from the Lakewood city limits and it’s big enough for a family with three bedrooms and two baths and over 1,786 square feet on a quiet street.

It’s got heavily drought- and labor-resistant rock and gravel landscaping and a long driveway leading to an attached garage with access to the house and lots of built-in storage.

The upgraded living room features a custom travertine fireplace and French doors leading to the family room, which also has a fireplace, then to the formal dining room and on into the kitchen with more labor-saving features: self-closing cabinets and drawers. Your working days are over with this place.

The home is listed by Stacy Schultz at a rather robust $800,000. Pretty pricey for Northtown, but, then, it’s close to an In-N-Out.

ZIPping through Long Beach: Today, real estate in the 90804