It’s all coming together for Josef Newgarden.

The 31 year-old Tennessee native took the checkered flag at the 47th Acura Grand Prix of Long Beach, winning a thrilling race that was action-packed from start to finish.

“This was a fight today, this was not an easy race to win,” said Newgarden after the champagne had been sprayed. “I’ve been trying to win a race here for 11 years, I’m so happy to get it done…Everyone looks at this place as the crown jewel of our sport along with the Indy 500. It means a lot to win here.”

Newgarden was the runner-up in Long Beach at the last two Grand Prix, and has finished in the top 10 here every time the race has been run since 2015. It’s his second IndyCar win in a row after taking the checkered flag in Texas as the series’ last race a few weeks ago.

Things are looking good off the track for Newgarden too—the next time he takes the grid for an IndyCar race, May 1 in Alabama, he will most likely be a new father. Newgarden’s wife Ashley is expecting their first child any day now.

“I don’t read into things too much…but I will say that for whatever reason, when there’s a lot of chaos going on in my life, we seem to do well,” Newgarden said. “We’re busy, there’s a lot on my mind, and a lot we’re doing. I’m trying to keep my head in the game with what we’re doing on the track.”

“I love coming here, it’s such a great location for racing,” said Gorsjean. “I couldn’t quite get (Newgarden), we were good enough for P2 but not good enough for a win. Next time.”

Palou has fond memories of Long Beach after clinching the IndyCar Series title here in September, but couldn’t hang on after leading for a good chunk of the race following a smart pit strategy.

“It was a good day for us, we had to be a bit aggressive and we came out of the pit in P1,” said Palou. “We led for some laps but we were lacking a bit of speed compared to Josef. It was a good battle with him, on the limit, but he won today.”

There was a lot of action on the course with several former champions crashing, including Simon Pagenaud and Takuma Sato; a notable “did not finish” was reigning champion Colton Herta, who started in the pole position after a record-setting day at qualifying on Saturday. Herta’s skill and recent success in Long Beach had him as an overwhelming favorite, with betting sites listing him as an odds-even bet, a rarity in autosports.

“An LA Times writer asked yesterday at what point does Colton Herta check out tomorrow?” said Newgarden after the win. “I was totally offended this guy just assumed he was going to win. I went to bed last night and I said, ‘That kid is not checking out tomorrow, there’s just no way. And he didn’t—we came here to fight today.”

With seven former champions in the 26-car grid, it looked certain that Herta or another former champion would take the checkered flag Sunday, but as always the Long Beach race was action-packed. Dalton Kellett went into the tires at turn one on the fifth lap, as Herta raced out to a steady lead and held it for the first third of the race. Alexander Rossi (who won in 2018 and 2019) had contact with Felix Rosenqvist on lap 21 but was able to stay in the race, running in the top five.

Alex Palou pulled out of the pits in the lead on lap 28, with Newgarden running second and Herta in third for the next 27 laps. Herta appeared to be biding his time, but went into the wall at the exit of turn nine. Herta was frustrated after the race that he couldn’t meet the high expectations for his team.

“I broke a little too late and locked the right front (tire) and that was all there was to it,” he said. “It’s just a stupid mistake. We were definitely in that thing. It’s unfortunate, I feel really bad.”

That wasn’t the end of the action, though, as Pagenaud ended up running side by side with Sato and then went into the flowers around the dolphin statue in front of the Aquarium of the Pacific.

“Someone finally went into the garden there, that’s never happened,” Newgarden joked about Pagenaud’s mishap.

Jimmie Johnson’s turn 8 crash forced a late yellow flag and restart, but Newgarden was able to keep Grosjean in his rearview. With Newgarden, Gorsjean, and Palou battling for the win in the last few laps, the NBC broadcasters were loving the action, shouting, “It could not be more tense!”

In the end, Sato crashed in turn 8 on lap 83, with Newgarden in the lead, and the race would end in caution with a yellow flag waving with a half lap to go, solidifying the win for Newgarden.

The win was the 22nd of his career, and makes the first back-to-back victories of his career in five years. It was also Team Penske’s 601st overall win as a team, and first in Long Beach since Pagenaud won in 2016 (which was also the last time Chevy beat Honda before Sunday’s race).

“I’ve been wanting to win here for the longest time,” he said. “We’ve run well here a number of times. I’ve been racing here since 2011, I was in the lead in the Indy Lights race but I went into the tires with two turns to go. Today was special.”

This year’s event saw a return to pre-pandemic crowd numbers (with exact attendance numbers not yet available) as well as the usual perfect seaside weather. The Acura Grand Prix of Long Beach will return next April for the 48th running of the city’s premier sports event; race organizers recently inked a deal with the city to keep it going through 2028.

The field consisted of drivers from 15 nations—eight from the United States, two each from Canada, England, New Zealand and Sweden, and one each from Australia, Brazil, Colombia, Denmark, France, Japan, Mexico,Netherlands, Spain and Switzerland. 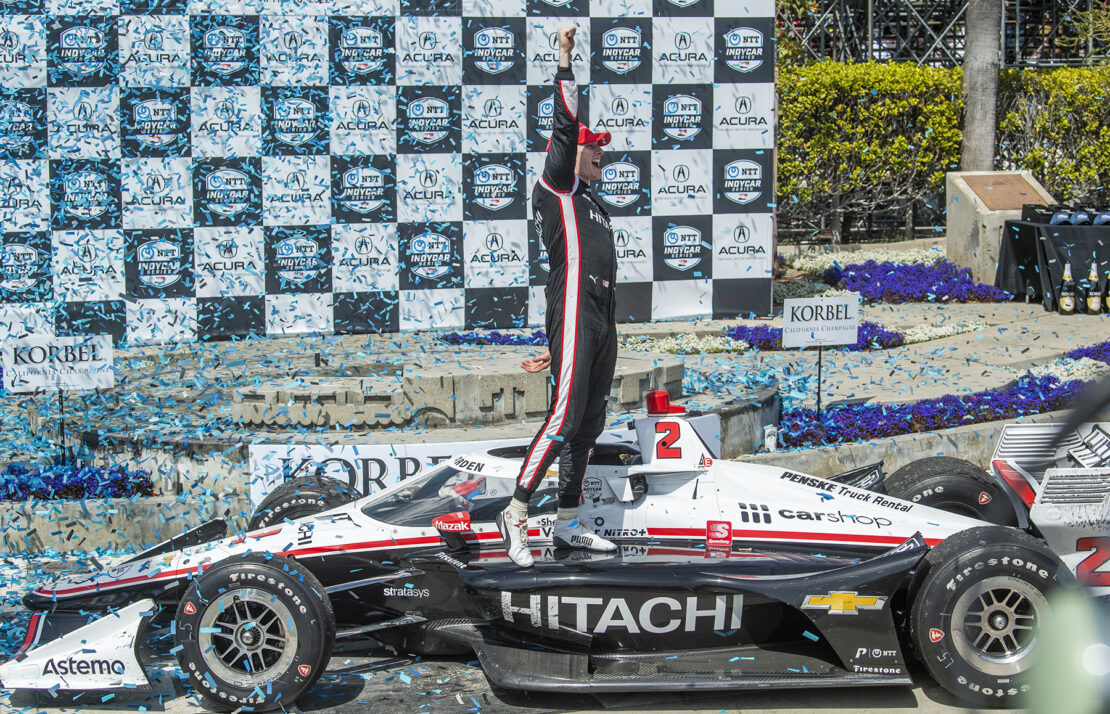 Josef Newgarden pumps his fist into the air as he exits his No. 2 Indycar after winning the 47th annual Acura Grand Prix of Long Beach Sunday, April 10, 2022. Photo by Thomas R. Cordova. 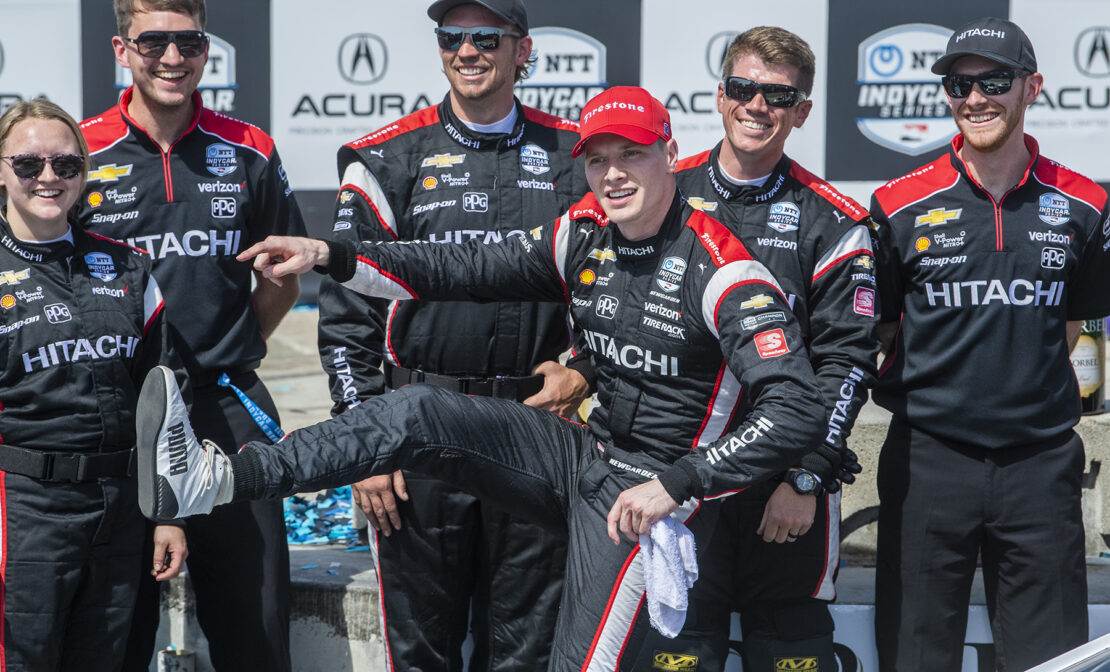 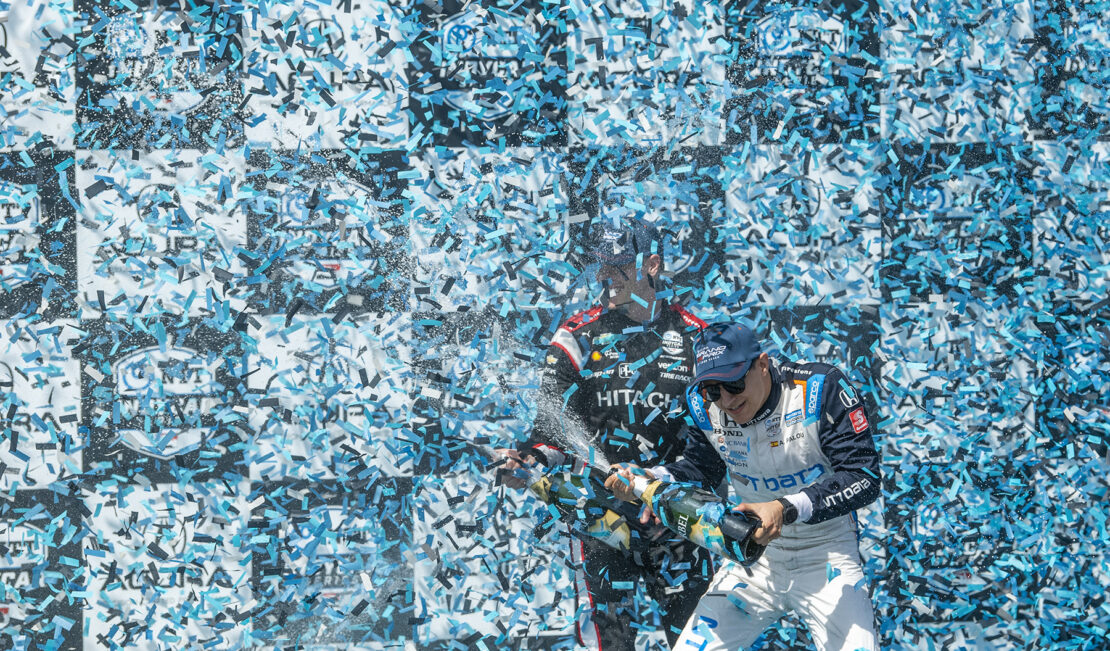 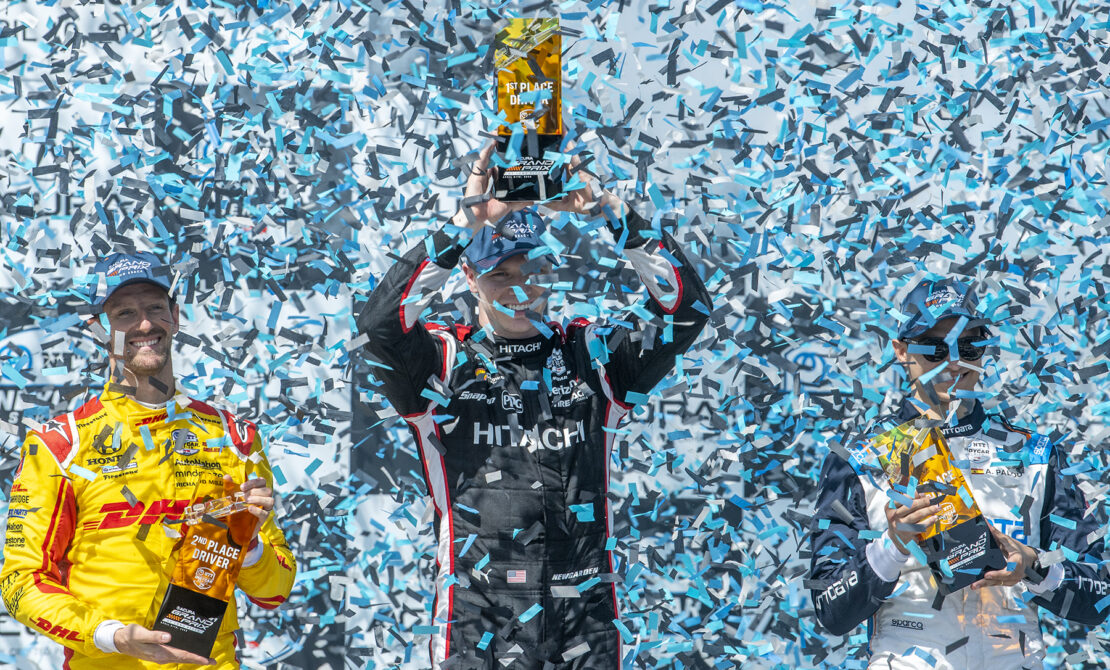 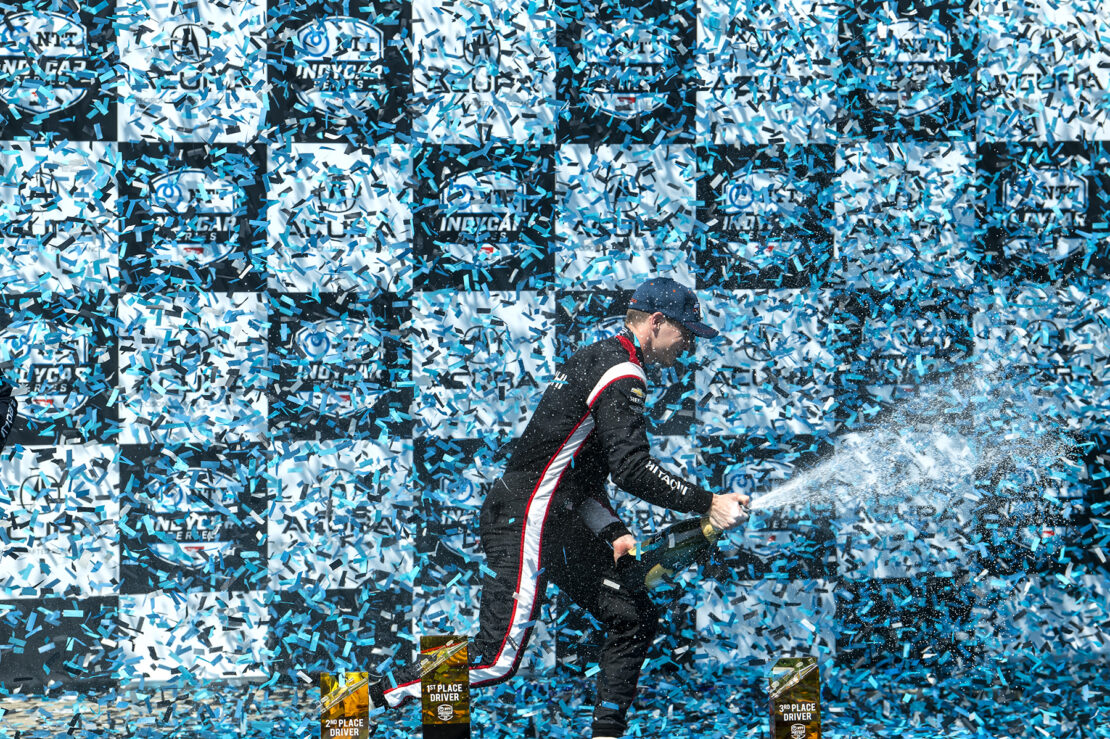 Josef Newgarden runs toward his crew as he sprays them with champagne after winning the 47th annual Acura Grand Prix of Long Beach Sunday, April 10, 2022. Photo by Thomas R. Cordova. 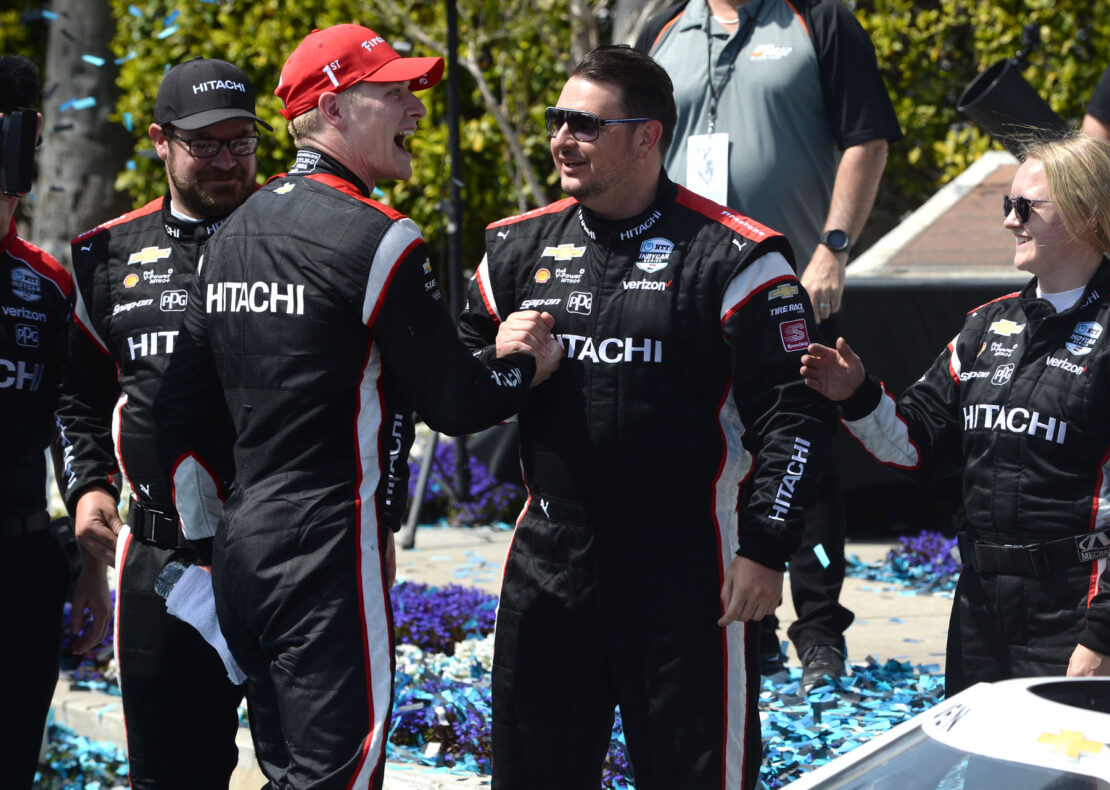 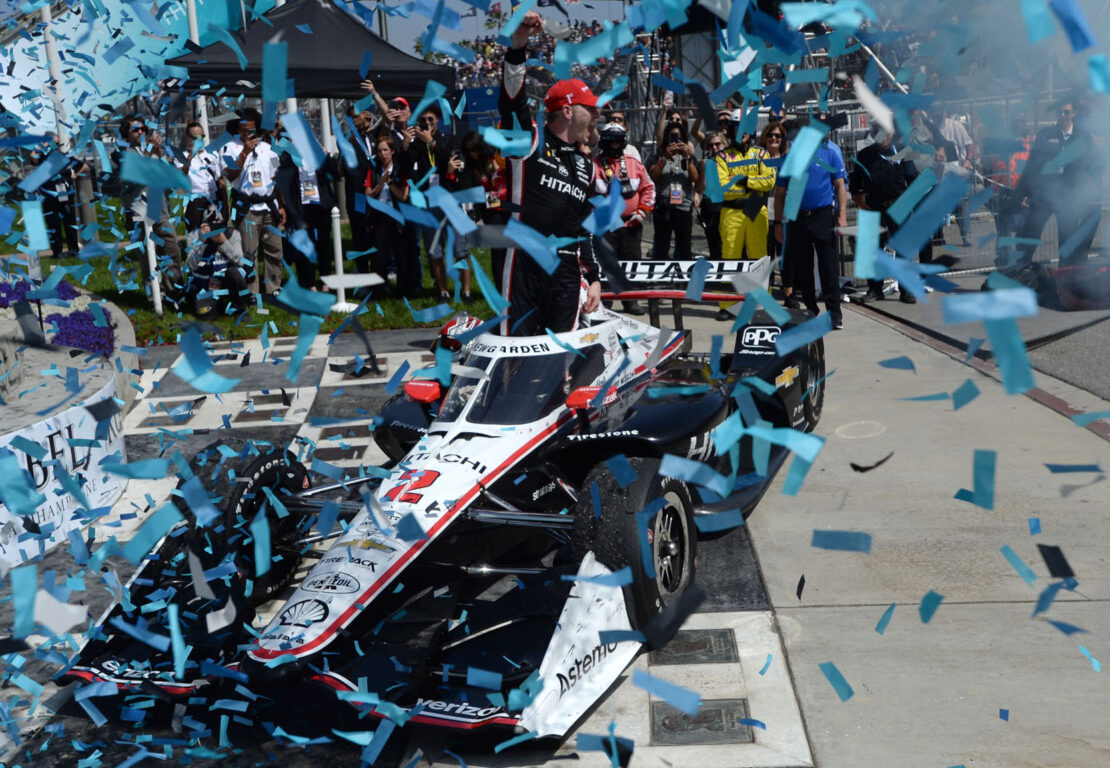