The rapidity and recklessness on the city of Long Beach’s part in acquiring the Queen Mary—the first domino to fall in a chain that continues to this day—was nearly admirable. That is, if you’re an admirer of the old ways of doing business: No cost- or feasibility studies, no community engagement, in fact very little thought. Just pass out the cigars, pour a little whiskey and then fly across the pond and buy a boat.

That’s only a slight simplification. The Real Estate Research Group conducted a study in 1966 related to shoreline development plans. The study made the vague recommendation that if Long Beach wanted to draw tourists, it should buy a tourist attraction.

As horrible luck would have it, at about that time Cunard in London announced plans to retire and sell its prized Queen Mary, already showing signs of age at 35 and losing customers to the increasing ease and convenience of trans-Atlantic air flight.

The men didn’t have time for studies or, for that matter, politics. They decided to buy the Queen Mary and there was no time for chitchat or dealing with the common folk.

The ship’s sale date “developed so fast we didn’t have time to bring it to the city council,” Fulton would recall. “We had to act fast or we couldn’t meet the deadlines.”

According to a 1971 report on the machinations of the ship’s sale in the Los Angeles Times, Mansell, on July 14, dispatched a delegation to Sacramento to call on Assembly Speaker Jess Unruh and state Sen. George Deukmejian to lobby for their OK to acquire the Queen. Deukmejian took the matter to Gov. Ronald Reagan, who gave his blessing.

A week later, without first getting approval from the city council, according to the Times, Mansell sent Vice Mayor Robert F. Crow, along with Cameron, Ridings, Port Commissioner Llewellyn Bixby Jr. and others to London to negotiate the purchase (again without council approval) for the Queen Mary with a bid of (without council approval—as noted, there was no time for such picayune niceties) $3,444,000 (without approval of the State Lands Commission, which was charged with approving purchases along the coast in Long Beach).

After the deal was sealed, the City Council ceremoniously and unanimously gave its approval.

The deal was done and excitement grew in Long Beach, the Queen’s near-future port. On Oct. 10, 1967, three weeks before the ship was set to embark on its final voyage, the Long Beach City Council authorized themselves to sail at least one leg of the voyage—not for fun, but for the good of our nation. Mayor Wade stressed the importance of the not-junket: The Queen Mary, he said, will be visited by officials and dignitaries at various ports, cities and nations and it’s important to have city officials there to meet them.

“Such participation is not only of importance to the city of Long Beach and the state of California,” he said, “but to our nation as well.”

The self-authorized invitation to sail on the Queen was extended to harbor commissioners as well.

So, the tag-team of luxury cruisers included Vice Mayor Crow flying to London for the first leg as the ship eased away from Southampton on Oct. 31.

In Rio de Janeiro, councilmen Bert Bond and Paul Deats relieved Crow, who flew home from Brazil while Bond and Deats cruised around Cape Horn to Valparaiso, Chile, where Mayor Wade and Councilman Emmel Sulivan hopped aboard for the last leg of the journey.

Similarly joining in on the relay were harbor commissioners Riding, William A. Harrington and Lewellyn Bixby Jr. as well as lesser city dignitaries, many of whom jumped aboard at Acapulco for the home stretch as the Queen Mary ended its 1,000th and final voyage to a home it had never even visited before.

Among the more than 1,000 passengers stepping ashore in Long Beach was Mayor Wade, whose written comments were handed out to the 800 crew members. He assured them that the Queen would be well cared for under the city’s stewardship. “It is expected that the vessel will have a continued life of at least 300 years,” he said. 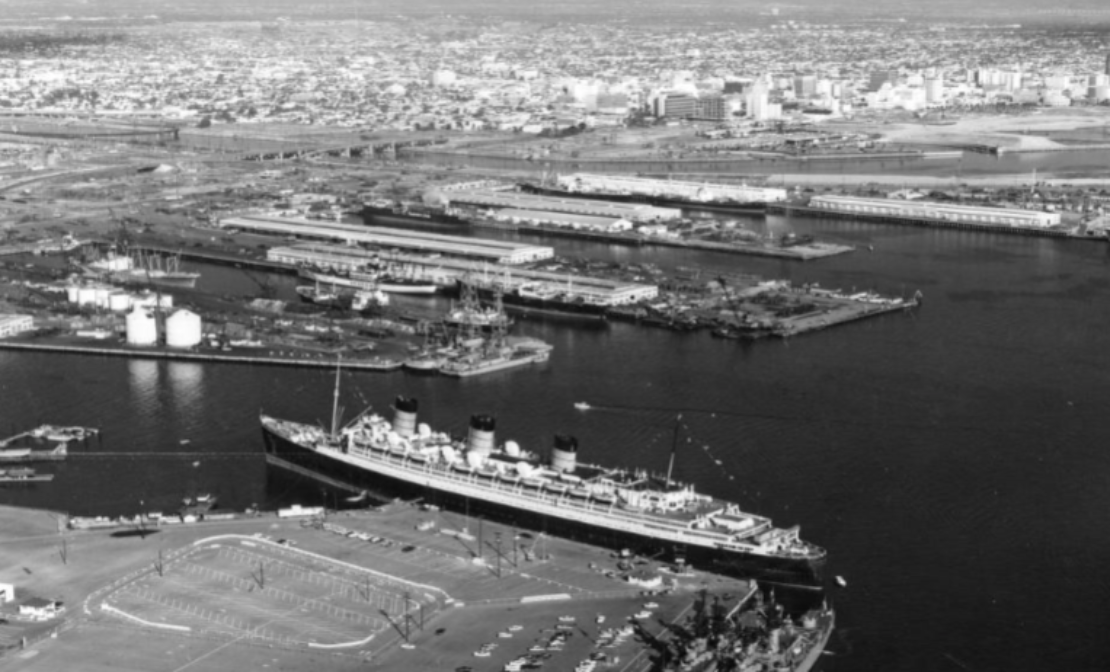 The Queen Mary at its Long Beach home at Pier J in 1968. Photo courtesy of Long Beach Public Library.

And, Wade noted that operating a former ocean liner was not the usual function of city government, and as for the manner in which Long Beach became the owner of the ship that would go on to accrue more controversy, corruption and cost than it had ever asked for or deserved, he stated, “If the city has made errors in protocol or procedures, they were errors of ignorance.”

It was the headlong, unexamined rush to buy the Queen Mary, that was Wade’s and his cohorts’ greatest error of ignorance. While they envisioned a tourist attraction that would rival Disneyland and be ready to take on that task for a minimal expenditure, they found a complex host of unexpectedly expensive problems with getting the ship in tourist-attraction condition. It’s a story that would repeat itself decades later: faulty electrical and sprinkler systems, massive structural work necessary, corrosion of the hull below the waterline, rusted smokestacks that had to be removed, new paint, cost overruns at every turn with jobs that were coming in at three, four or more times their estimates.

In the LA Times’ exhaustive analysis of the ship’s first three years, headlined “Queen Mary Project—A Story of Waste,” lead reporter George Reasons wrote, “The gallant ship, once a symbol of elegance, has now become a symbol of bureaucratic waste and mismanagement, and the butt of demeaning jokes.”

In a detailed audit at every aspect of work needed on and around the ship, the Times reckoned the city’s total investment by March of 1971 came to $52,695,735 in improvements, repairs, infrastructure, cost overruns and botched work. And that was in 1971 dollars, long before the word “billion” became bandied about so cavalierly as it is today.

And those expenditures were made before May 1971, when the first tourist stepped onto the deck of the ship.

Since then, millions of people have toured the ship, enjoying an ever-changing array of activities and exhibits, but even in its happiest times, the Queen Mary has never pulled in enough money to make it a stably profitable attraction.

Further, over the decades, a long string of operators has, to various degrees, mismanaged the vessel, and throughout its 54-year-long stay in Long Beach, it’s received relatively little attention in terms of upkeep to the point of where it’s once again racking up huge numbers in terms of what’s required in the near and long term, with estimates ranging from tens of millions of dollars to keep it from falling apart in the next few years, to hundreds of millions to make it the world-class attraction that Long Beach’s leaders have always desired, but who have done little more than hope and pay.