With Halloween right around the corner, kids and tweens everywhere are getting ready to dress as their favorite characters. Timeless classics such as career costumes (firefighter, astronaut, chef, doctor), fantasy creatures (dragons, mermaids, princesses), and scary monsters (zombies, witches, vampires) will be as common as ever. Every year, though, movies, television shows, and games influence the most popular choices. If you’d like to keep up with the newest trends and recognize the colorful cast of characters parading down the street (or across the country on your video chat!), read on to see what the kids will be donning on the 31st.

You can count on some Star Wars costumes every year – like Darth Vader and Stormtroopers – but if you haven’t seen The Mandalorian (the latest television series released in the Star Wars universe), you may be surprised by the little Yodas showing up in your neighborhood. Baby Yoda looks just like the wizened character from decades past but with exaggerated features and a cute robe/scarf to hide his face in. Other Star Wars characters you’ll see this year from newer films: Rey, Boba Fett, BB-8, Finn, and Poe.

The youngest crowd this year may be wearing Paw Patrol costumes to celebrate their favorite team of rescue pups. Chase (blue/police), Marshall (red/firefighter), and Skye (pink/helicopter) will be the most popular from the crew, and they may come with their vehicles in tow. Impress your grandkids or neighbors by calling out the Paw Patrol catch phrase while you hand out candy: “No job is too big, no pup is too small!”

With the release of the final installment in this trilogy in 2019, the Descendants characters will be popular this year among tweens. The story follows the “next generation” of Disney heroes and villains, all descended from original Disney names (Belle, Ursula, Captain Hook, etc.). Popular females are Mal (dark purple hair), Evie (bright blue hair), Uma (green hair), and Audrey (pink hair) in jumpsuits and adventure-ready dresses. Male characters are Carlos (silver hair), Jay (red beanie), and Harry (pirate hat) dressed ready for battle. 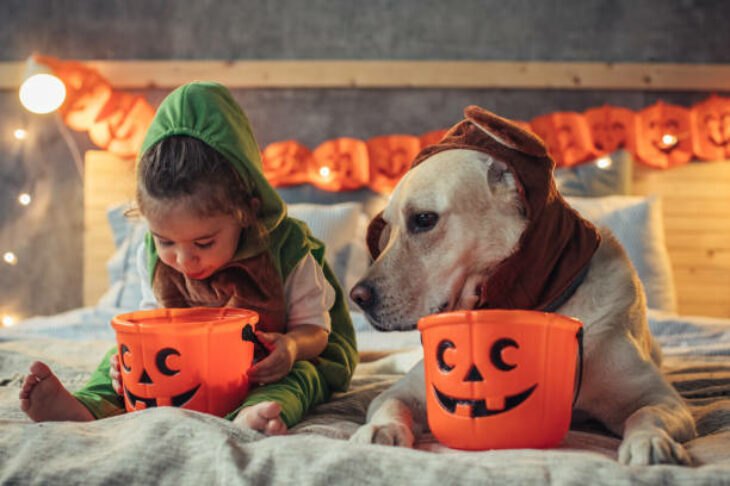 Superheroes have made a comeback in recent years, and this Halloween will be no different. Avengers: Endgame was released last year, and it featured just about every superhero from the Marvel universe that you can think of. You’ll recognize staples such as Spiderman and Captain America, but look out for other Marvel heroes like females Captain Marvel and Black Widow. Black Panther will be popular as a tribute to actor Chadwick Boseman’s recent passing.

If you had children in the 80’s, you may remember the Troll dolls. Welcome to a new-millennium version! Inspired by movies released in 2016 and 2020, these trolls are fully-clothed, don’t have jeweled bellies, and sport a wide array of colorful costumes and accessories. The most popular Trolls are Poppy and Branch. Poppy wears a blue flower crown in her tall pink hair; Branch is a blue troll with gray hair, woodsy clothing, and a sometimes sour attitude.

Video game-based costumes will be popular this year, with Fortnite and Minecraft topping the list. From the Fortnite universe, look out for kids wearing “skins” just like their in-game characters. Drift (red vest and white/pink/gold fox mask), Skull Trooper (skeleton-soldier), and Omega (black armor jumpsuit with a silver mask) are the most popular – you may also see llama costumes and accessories that reference the llama-shaped piñata that gives supplies in the game. Minecraft costumes look blocky/boxy to reflect the cube-shaped building blocks of the popular game. Steve and Alex (main characters with blue/green tops), Creepers (green rectangular monsters), and Ender Dragon (black with wings) will be popular, along with pickaxe and sword accessories. If your grandkids arrive with boxes on their heads and pixelated weapons, Minecraft is your best bet!

Whether you’re on the porch watching the neighborhood kids trick-or-treat or enjoying a backyard Halloween party with your grandchildren, recognizing these Halloween costumes will help you join in on the fun!

The Active Aging Series is brought to you by our partner, Cambrian Homecare. Cambrian Homecare has been assisting individuals to stay independent in their homes for 25 years. Flexible experience you can trust, when the best place is still at home.