Cameron Kude had finally discovered a pathway to combine his passions of catering and film with his abilities as a solid barista.

Powered by three car batteries with water heated via propane and having the ability to go inside any building outfitted with double-doors or a freight elevator, all Kude and his business/life partner Juan Fernandez need is about 45 minutes to set up and get the cart full-service, coffee shop operational.

The Long Beach native dubbed the cart Cafablanca, after the iconic film “Casablanca,” and it allowed Kude to connect to an industry he both admired and respected. Things went very well, pretty much from the start. After a gig at the KTLA newsroom, Cafablanca began garnering connections to more sets, more studios and more coffee catering business.

Then, COVID-19 hit, forcing him to take on an entirely unexpected model for his cart: Always make the coffee free, live off of donations, support humanitarian and social causes—this past week, 20% of his profits have been given to relief efforts in Beirut—and assure, best as he can, that all the product partners he works with—from roasters to farmers—are similarly motivated. 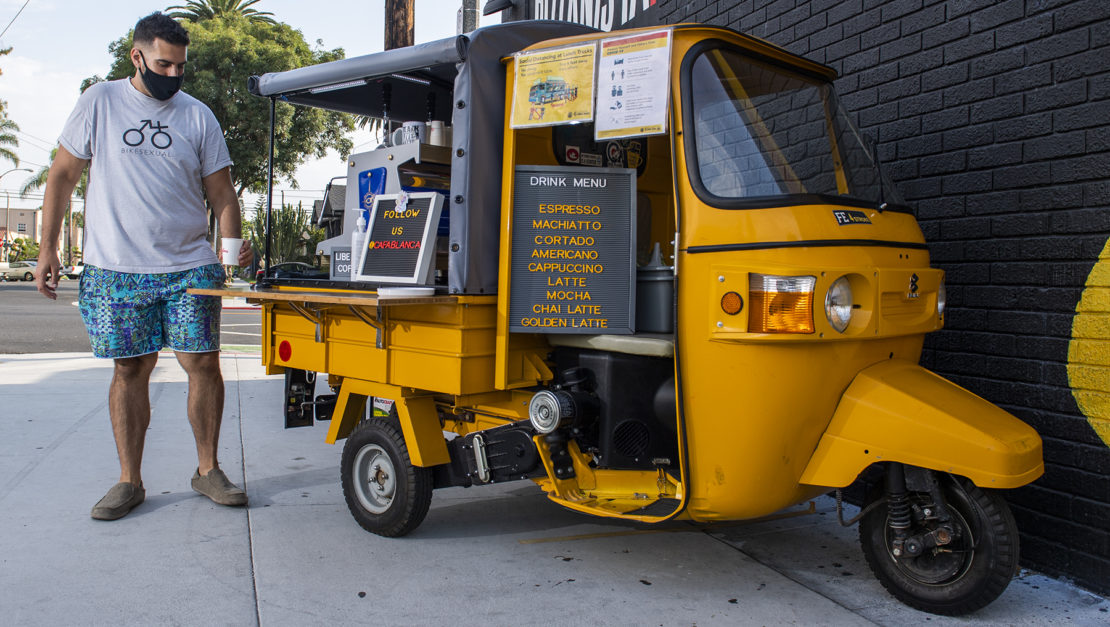 Cameron Kude places a drink on the bar for a customer as he works his pop-up coffee cart, Cafablanca, in Long Beach Tuesday, August 18, 2020. Photo by Thomas R. Cordova.

This year, Cafablanca sat in a parking lot from March through July, a major bummer for a full-on espresso shop that can be practically moved anywhere and one that was so new, it did not qualify for small business relief from the government. Being out of work was nothing new for Kude, he found a remote job that allowed him to “barely skid by,” but losing a chance on his dream was tough.

“And it was a Trump troll, of all the things, who made me re-approach my business, that gave me inspiration,” Kude said. “No joke.”

Scrolling through Instagram, Kude decided to compliment Oregon Gov. Kate Brown’s request that federal troops leave Portland during the height of its unrest—something that prompted one anonymous user, who Kude says used Nazi rhetoric, to threaten to ruin Cafablanca by leaving hundreds of one-star reviews.

“Threatening to ruin my already-ruined business thanks to a president who hasn’t remotely handled a pandemic appropriately? Well, it inspired me to reinvent my business and turn it into an anti-fascist, anti-racist, anti-capitalist enterprise as a giant middle finger to a guy that tries to ruin the livelihood of people he disagrees with on the internet.”

The cart’s nod to “Casablanca” suddenly took on a double meaning: not only as a tribute to his great-grandfather who created movie posters back in the day, which fueled Kude’s love of cinema, but because “Casablanca” is arguably the most iconic, anti-fascist film ever made.

Swapping out an old Hollywood poster with one for “Black Lives Matter,”  Kude was now on a mission to work entirely on a donations-based system. Customers’ donations not only pay for the labor the cart requires but supports Cute Coffee, the female-led roaster in Oakland who supplies beans from female-owned farms in South and Central America, while the rest goes to a rotation of humanitarian causes of Kude’s choosing. Besides the current 20% that goes to the Beirut relief effort following its disastrous port explosion, Cafablanca has also contributed to Black Lives Matter.

“At first, I admit, I felt wary about the model, like, ‘How will this work?'” Kude said. “But then we began discovering that we were making more than flat-out selling it. Sure, some people don’t donate anything; we don’t enforce it, we simply ask. But honestly, when it happens, it’s when someone can’t afford it and that’s OK because that’s what we’re here for. We uplift and support our community—and that means not asking them for money they don’t have. It means asking them for what they can give—and sometimes, that is a ‘thank you.’ And that ‘thank you’ is enough.” 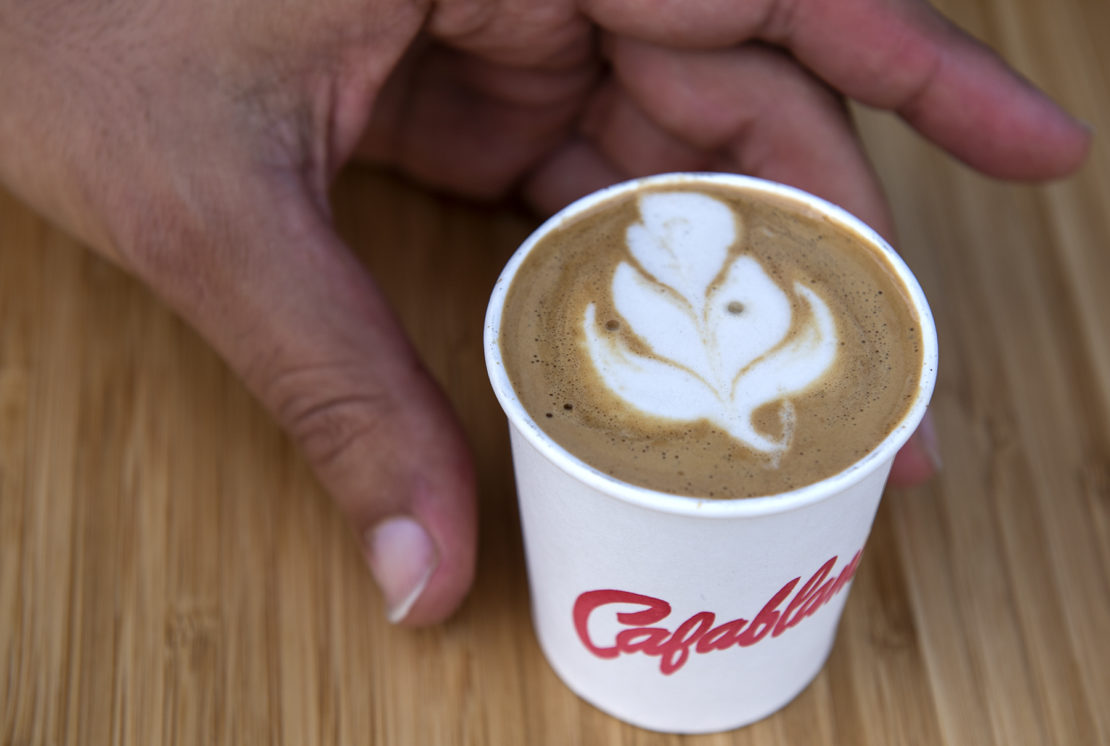 The first time Cameron heard about this particular coffee cart he was working as a barista in Oakland. A customer named Henry Springal approached him about shooting a Kickstarter video for Springal’s endeavor to build a $25,000 Tuk Tuk-like cart tailored specifically to making espresso drinks.

“I was an aspiring filmmaker slaving away at a coffee shop, I jumped at the chance,” Kude said. “He was inspired by his father’s involvement in a coffee shop back in the day and he was interested in the engineering and electrical aspect of it all. But when it came to the actual coffee making itself, his interest sort of just fell off.”

And that gave Kude an idea. Long separated from the coffee shop where he met Springal, he had ventured into the world of catering, many times for tech giants such as Facebook and Google. Now he thought about merging love and craft by heading back to SoCal and creating popup coffee stands for TV and film sets, utilizing Springal’s cart.

“Henry was just kind of sitting on it, not really doing anything. He took a huge gamble and risk letting someone he barely knows take this thing he had poured his heart and soul into and make something of it. And, of course, I still owe him a lot of money,” Kude said, laughing. “But he has been incredibly patient and generous, especially going into a catering business shortly before that entire business went into a coma.” 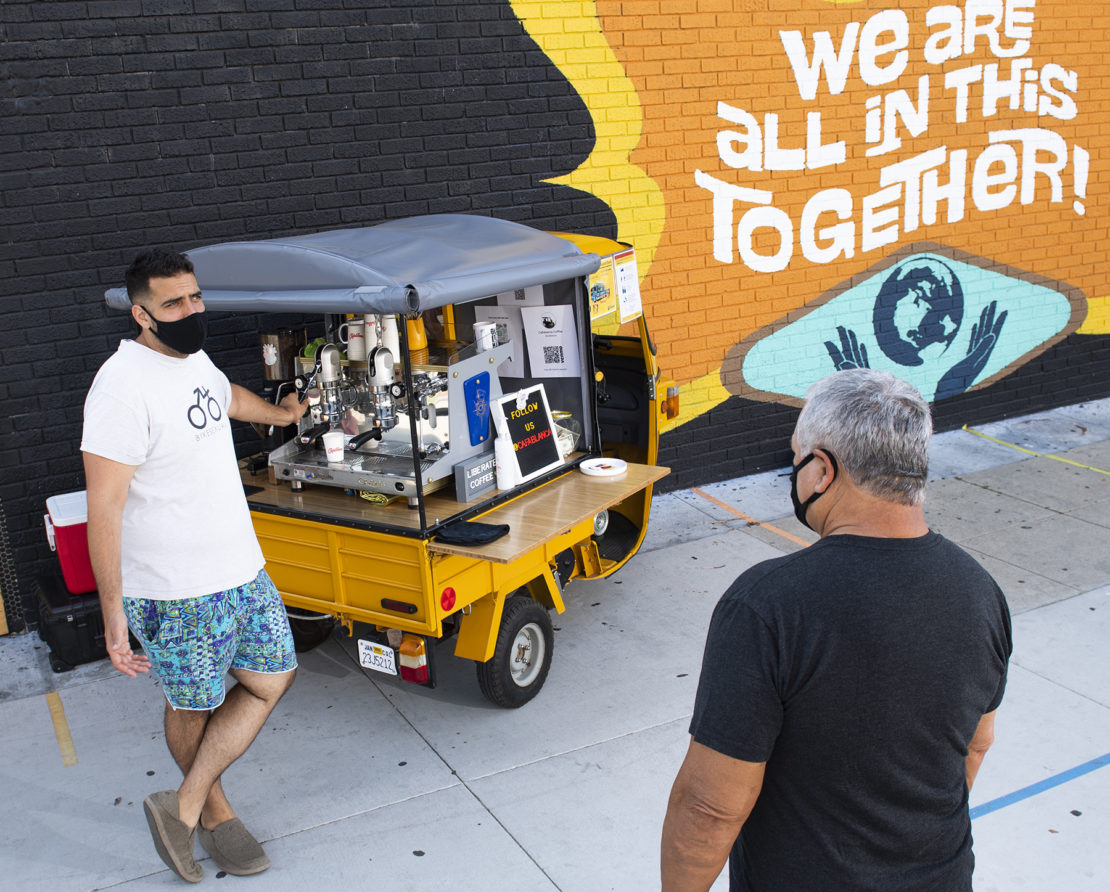 Cameron Kude chats with a customer as he makes his drink while working his pop-up coffee cart, Cafablanca, in Long Beach Tuesday, August 18, 2020. Photo by Thomas R. Cordova.

Much like discovering how to blend his love of film and craft, Kude discovered that connections can come through community itself.

“Coffee is in and of itself a community—anyone who has worked in coffee knows that,” Kude said. “And this cart was about that community. So when Kobe passed, we saw it an opportunity to simply give away free coffee for Los Angeles while it was mourning.”

Parked next to the massive Mamba mural on Melrose Avenue between Spaulding and Genesee avenues, Kude and Fernandez began handing out free espresso drinks to mourners while they surrounded the mural with candles, flowers and tears. In pure serendipity, Wendy Burch from KTLA happened to be sitting in her car, noticed the cart, and decided to strike up a conversation.

“Having just moved back to Long Beach [in the fall of 2019], I had no idea who the local anchors or journalists were,” Kude said. “She seemed like a normal customer, and she was until the KTLA van rolled up.”

Shooting their story on the spot, Kude didn’t waste the opportunity to sell Cafablanca and, a few days later, found himself and his cart in the KTLA studio. Then came more gigs. Then came COVID-19. 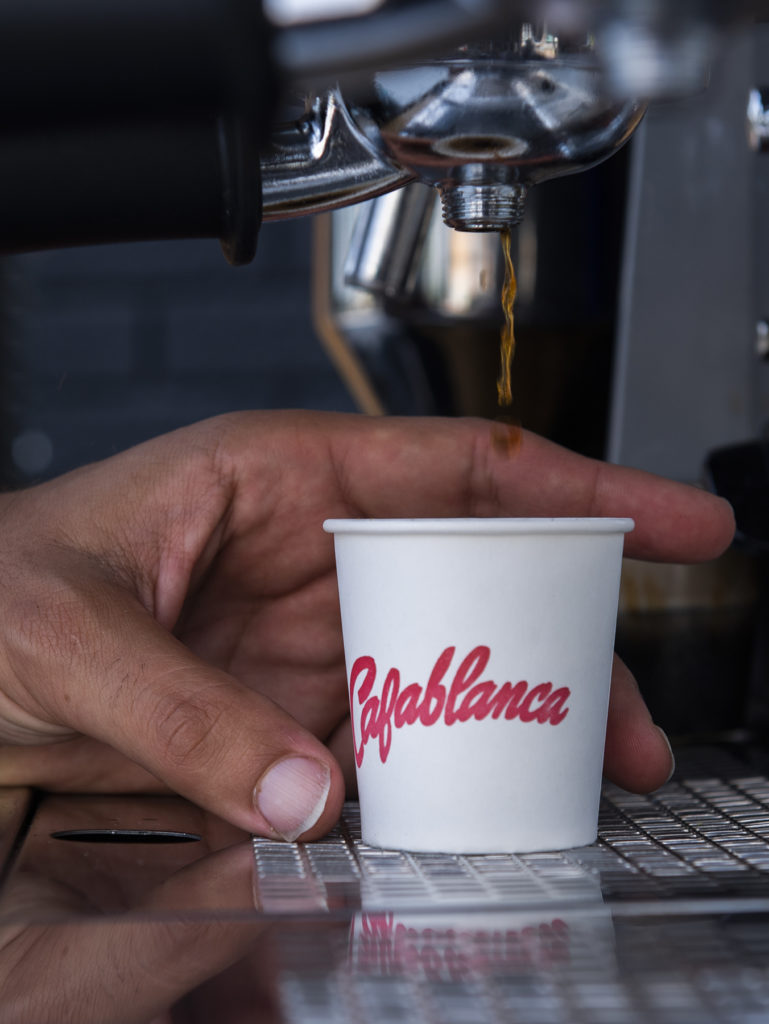 An espresso shot being pulled from a restored Astoria machine at Cafablanca, in Long Beach Tuesday, August 18, 2020. Photo by Thomas R. Cordova.

But COVID-19 has proved to be a test in resilience and provided a deeper connection to Long Beach for Kude. Unlike his partner, Kude was a vagabond for much of his young adult life. From Portland to the Bay Area to Humboldt, nothing ever felt permanent enough to call home. Returning to his hometown, paired with his love for Fernandez, has reignited not just his desire to uplift Long Beach but to uplift everyone.

Each day on their Instagram, the queer pair announce where they’ll be the following day. From Rose Park and Martin Luther King Jr. Park to Retro Row and Downtown, the cart is finding a following. While the cart was parked at Black Bar this morning, one customer noted he goes “wherever they go. Me and my girlfriend just love it.”

“That’s the thing,” Fernandez said, “people just love what we’re doing. It’s such a reciprocal admiration too. And in times when it seems everyone is against everything, really, how can you be against coffee? How can you be mad at coffee?”

This isn’t to say their politics are widely accepted. The pair has had the police called on them multiple times—”There’s a Karen in every neighborhood,” Fernandez said. The reason behind the calls? Unknown. But the day-to-day, face-to-face interactions with Long Beach residents across neighborhoods, they say, is worth every ounce of effort and, sometimes, bother.

“Each day offers a new experience and a new connection,” Kude said. “It’s a new introduction, it’s a new set of faces, and it is absolutely beautiful to witness. Juan and I are honored to be back in our home city and yeah, we’re happy to be fueling the resistance.”

Cafablanca continually rotates its locations across Long Beach. They announce their location one day before on their Instagram.