For Chef Arthur Gonzalez of Panxa Cocina, as well as the steak-centric Hideaway space in Zaferia, the Hatch chile is sacred, as it is for the vast majority of New Mexicans.

The Hatch Valley in southern New Mexico has become synonymous with green chile, with its altitude, water and nutrient-rich soil creating a chile so distinct that its annual harvest attracts tourists, food lovers, chefs and locals to come in droves to get their 20-pound bags of freshly roasted Hatch chiles. The end of summer brings with it the ubiquitous site of road-side chile roasters, typically led by rancheros turning a cylindrical, perforated metal drum filled with green chiles over an intense, propane-fueled fire that chars and blisters them to a deep black.

“You can smell the chile in the air,” Gonzalez said. “You can smell it as the harvest is coming and then you smell the smokey, sweetness the chile brings as the community begins to roast them. It is something that continually enchants me.”

That enchantment started when Gonzalez took a position in the lauded Santa Fe restaurant Geronimo and forever altered his perception of the chile and its importance to New Mexico and the United States. Going to the farmers market, Gonzalez tells the story of his first Hatch chile experience courtesy of Matt Romero of Romero farms, one of New Mexico’s most respected outfits.

Putting a freshly made flour tortilla in one, Romero pulled a piping hot Hatch chile from its tumble of hell, sprinkled some salt and handed it to Gonzalez in what he calls “the Hatch’s purest form.” 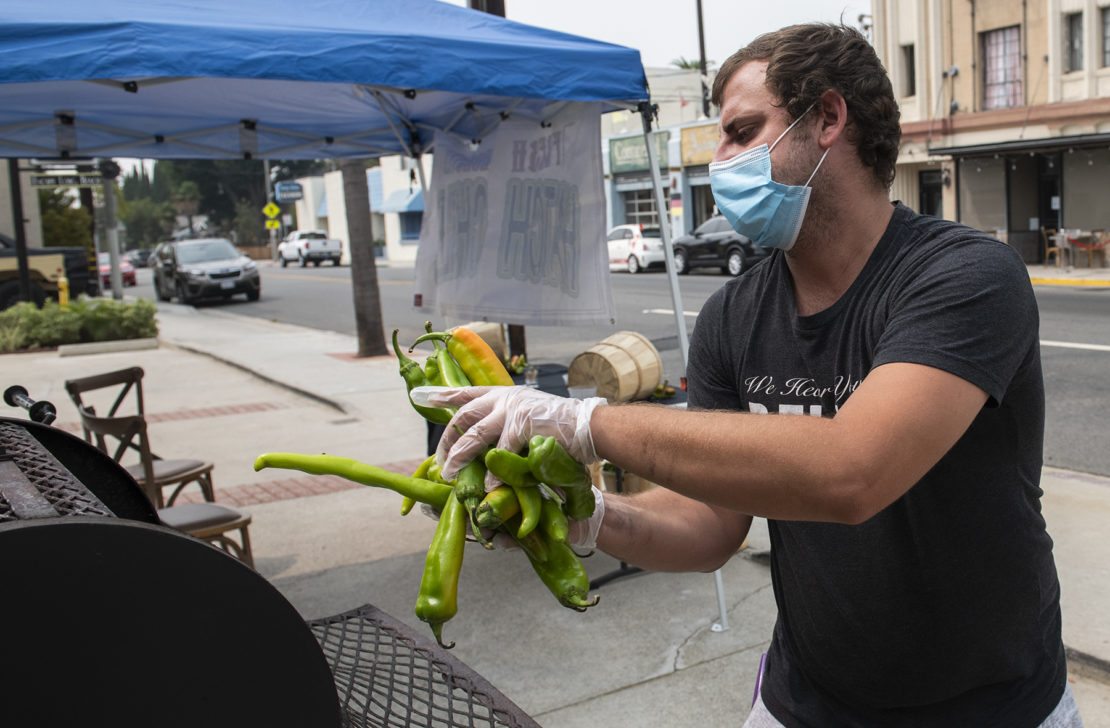 J.J. Lindsay places Hatch green New Mexico chile in a roster as Panxa Cocina has been roasting the fruit for its fifth year in Long Beach Saturday, September 12, 2020. Photo by Thomas R. Cordova.

By the time Gonzalez began to hatch the idea of Panxa Cocina, his ode to Southwestern American cuisine in his hometown of Long Beach, he knew he would have to search out a chile savant to bring him the best.

Enter Hector Mendoza, the man who gives Gonzalez a call each year to let the chef know that the chiles “have told me they’re ready.” And for Mendoza, despite farmers having developed a chile that ripens earlier and therefore expands the chile roasting season, there is nothing more needed for great chiles than patience.

“There’s some varieties out here that are made to come off early and people tend to get all riled up because they think they can go get some and roast ’em up,” Mendoza said. “‘C’mon,’ they would say, ‘Let’s get the roasting season started!’ It doesn’t pay for you to get real excited real early because you won’t find that high quality New Mexico chile in the early market. You have to wait.”

For Mendoza, that typically means waiting into late August or early September, sometimes stretching his harvest into the middle of October. The result? Hatch chile from the Hatch Valley at its most delectable—and those are precisely the chiles you will eat when visiting Panxa Cocina.

It’s a Long Beach-only gem and experience for which the 14-hour drive to Santa Fe isn’t needed.