'My work is for you': The many wars and sublime optimism of photographer Duke Givens • the Hi-lo
- ADVERTISEMENT -

When meeting Long Beach photographer and filmmaker Duke Givens, one is immediately confronted by a gravitational charisma suffused with resonant optimism. It is not a naive optimism by any stretch—his experiences in Desert Storm and with gang violence alone are proof that Givens’ life has been anything but tree-lined streets and white picket fences—but one enveloped in some hard truths.

That juxtaposition makes it hard to shy away from Givens’ presence because of a resolute belief that optimism—even when admitting failures, even when admitting his art can never be perfected—is a choice, one that is often hard-fought and in a constant search. And so he asks questions, of himself and of those he’s just met, invariably the answers settling somewhere between love and optimism, perhaps never as distinctly as his recent “Black Men Matter,” project, a single black-and-white photograph of hundreds of Black men standing proudly and united in black suits.

“This image will be here when we’re long gone,” he says. “I hope it says, more than anything, ‘Peace.'”

Arriving at that destination, however, has proven more complex. 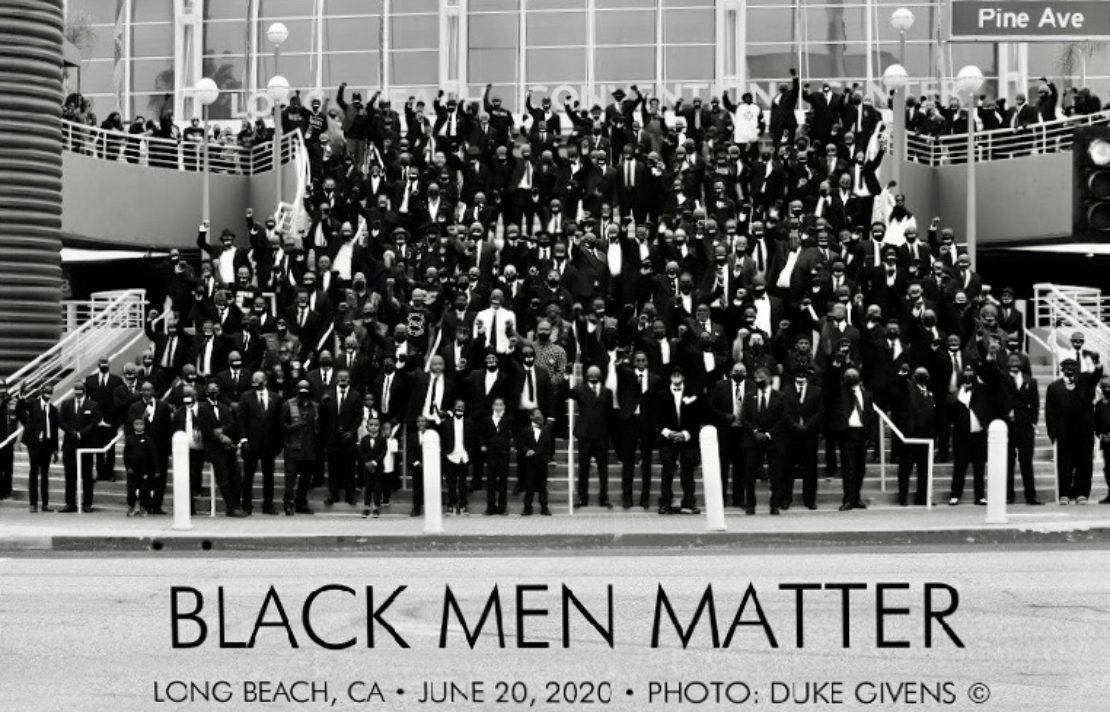 When Givens graduated from Poly High in 1989 with his best friend Calvin Broadus, he knew two things: he wasn’t ready for college and he desperately wanted to escape the violence that surrounded his home on the 2100 block of Lime Street.

After spending his first year of high school in the countryside of Chickasha, Oklahoma, where his father was raised and his grandmother lived, the violence was a shock upon his return to Long Beach, where he was born and raised.

“Being a city boy moving to the country was poignant and life-changing because you get a chance to see a different side of life,” he said. “It was there that I really cemented my perspective on the world.”

That experience—one which he would reflect on often upon his return to Long Beach—was defined by a near-tragedy, a car accident that left him hospitalized for days. The first time he was able to stand, he walked to the window and discovered nearly the entirety of his high school standing outside in support.

“It wasn’t Black there, no White there, not Latino there, wasn’t Asian there, it was just our friends wanting us to be OK,” Givens said. “It really planted the seed in me that people are cool. Flat out. These experiences were really shaping my life, showing me that humans care about other humans. So returning to Long Beach—you know, it’s the mid-1980s, so gangs are just blowin’ up—I saw a part of life I was never expecting to see.”

For Givens, the same young men he had played sports with before leaving for Oklahoma had become subsumed in territorial violence disguised as brotherhood.

“It was surreal,” Givens said. “A guy I would play Pop Warner with was now willing to kill me because of where I lived and where he lived. I’m trying to process this all in my mind, like, how is this happening to us? You grew up over there and now you don’t like me? Why are we actively seeking to create a war zone in our backyards?” 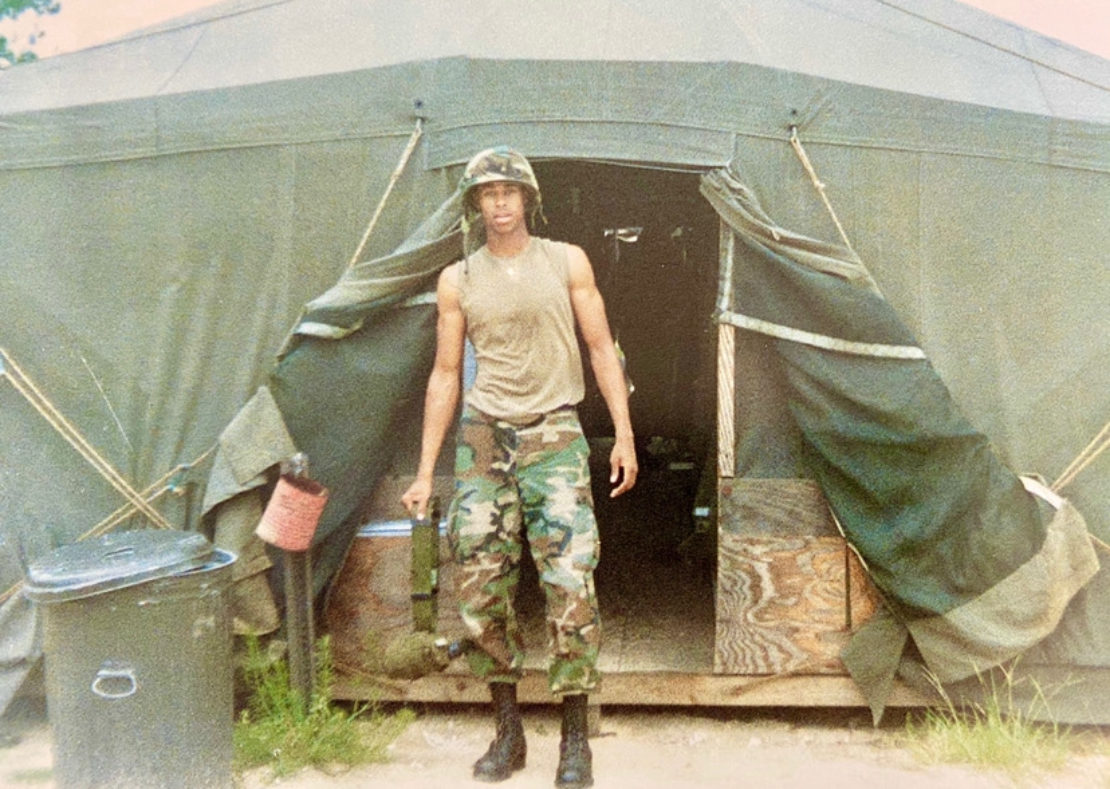 Duke Givens served in the United States Air Force from 1989 to 1993. Courtesy of Duke Givens.

In 1989, Givens and a few friends—including Broadus, known amongst his friends as Cordozar—were approached by military recruiters at the Long Beach Mall in downtown, trying to convince them to face a different war in Iraq. Givens was the sole person in his group to say yes, joining the United States Air Force that same year.

Upon his return to Long Beach in 1993, he discovered that Cordozar was now known as Snoop Dogg and that his neighborhood, plagued by violence, would soon become the focus of his own creative drive, thanks to a gift from his parents that, frankly, he simply didn’t understand. The gift, a 35mm SLR Canon AE-1 camera, initially baffled him; little did he know it would become a key cog in not only his future professional endeavors but a form of expression which has altered the way Givens approaches the world each day.

“I really thought they were crazy—it was like, ‘Why would you buy me a camera?’” Givens said. “I had no idea it would become a passion but after I took a class at Long Beach City College, my first print—this shot of two young Black girls—won me a contest and some confidence in my photography skills.”

That confidence came into focus with Givens opting to photograph the darker side of life: funerals of young men gunned down, including his nephew, photos of current and ex-gang members, nods to the war that pervaded his home turf. With his friends who, seemingly overnight, became household names worldwide—Nate Dogg (Givens’ cousin), Warren G (a longtime friend), and, of course, Snoop—he produced a calendar that sought to reduce gang violence or, at the least, open a much-needed dialogue.

“That’s life in the city—this world is violent,” Givens said. “But you have to accentuate the positivity… My Dad was essential in helping me realize that. You can put something up on a wall that degrades women or you can try and do something positive, create an idea. That’s where the real peacemaking happens: ideas.”

In fact, Givens, who never joined a gang himself, was able to witness its other side. With many gang members lacking fathers or father figures, there was a fierce loyalty amongst them that looked more like brotherhood than ganghood, a fact that fueled loyalty and connection the young men so desperately needed while simultaneously committing acts of violence. 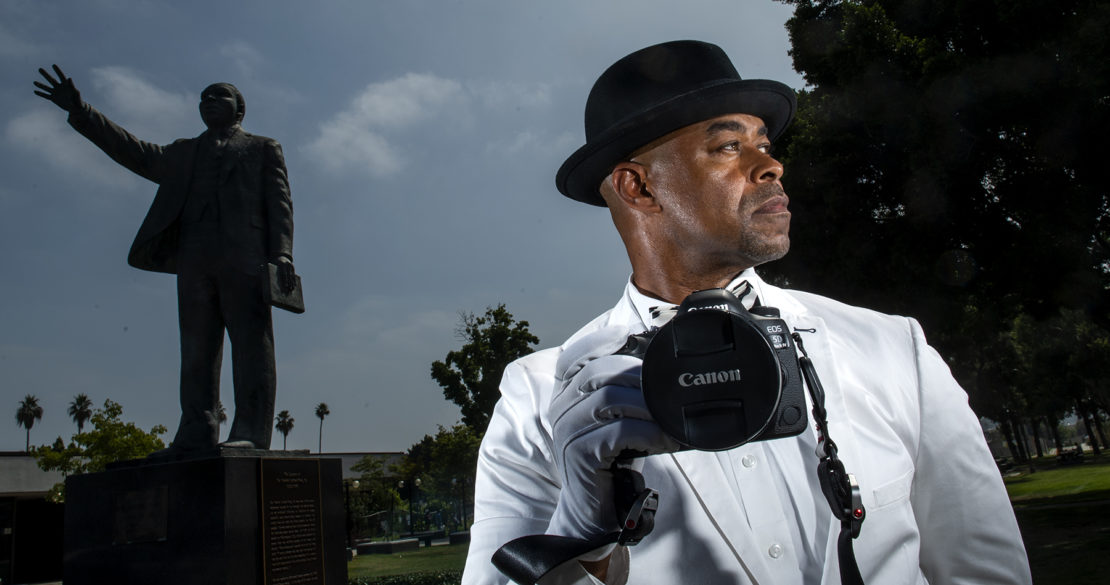 Givens’ father became a role model for his friends, especially Snoop. Though the boys were required to pull up their pants whenever stepping inside the Givens’ home—“[My father] wasn’t militant; he was hard-working and he sought respect,”—the house was a safe haven of sorts, where Snoop’s budding love of music was welcomed and encouraged.

“Snoop just walked up and said, ‘There it is,’ and I was like, ‘Say what?’” Givens said. “‘That’s my next album cover.’ It was… uniquely weird. I was developing something that I wasn’t even sure where it was going.”

From a roll of lost negatives that depicted Snoop’s court battle in the 1990s to the day-to-day existence in Long Beach’s Sixth District, from his days in the military to his chronicling of fathers and sons, Givens’ gaze and point of view permitted him to build a portfolio spanning both photos and video.

”Capturing history, even when that history is ugly, is a beautiful thing,” Givens said. “It provides perspective and it allows for us to channel positivity, to discover change, to have a better life.” 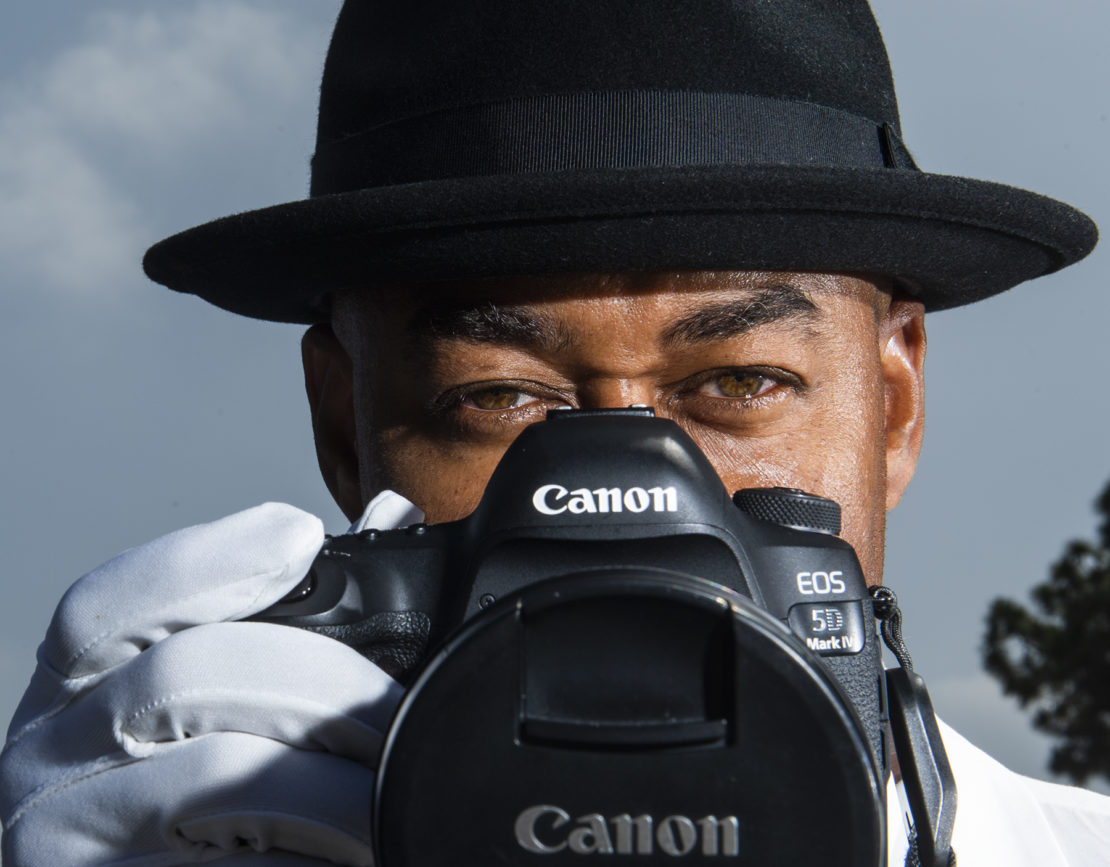 For him, 2020 was the year he felt like his experiences had culminated in enough that it was time to claim his own historical image; a picture that would reflect his own artistic vision but also go beyond him, living well past the last days of his life. COVID, he said, presented what he called “a blessing” for his artistic life: He photographed neighbors and families losing jobs, forced to stay inside, only to find them once more out on the streets, this time in protest and, in some of the images, rightful anger.

Then came “the end of the arch that has been this year so far.” Hundreds of Black fathers, sons, uncles, nephews, brothers, caregivers, standing on the steps of the Long Beach Convention Center side by side in unity. It was an image Givens had dreamed of ever since returning to Long Beach from Oklahoma; the same one he dreamed of when he returned to Long Beach from the Air Force.

He has long seen peace and unity as being tied together, like the friends of different races who play with his sons in their neighborhood and remind him that racism must be taught because “those kids have a love so blind that it goes beyond just kids playing.”

But that knowledge is soon followed by another question.

“Do you love people?” he asks.

“Are we our brother’s keeper or are we not? You gonna grab that belt loop and not let him go? Because let’s be honest: There’s people out there who are letting you go,” he said. “Life is not black and white—and the camera is the most unprejudiced thing on the planet. I consider my ability to use that tool, a camera, as a gift from God. My Long Beach family, my blood family, my nation, my work is for you. I had a calling so I had to use my gift because it isn’t mine to own—and I pray that everyone sees that. They have a calling to uplift the world and they need to find it and give that gift back to the world.”

Duke Givens’ “Black Men Matter” photo will be available to purchase in 24-inch-by-36-inch prints signed by Givens. The online shop will be up in the coming weeks.