When Chef Jason Witzl first opened Ellie’s in Alamitos Beach, he had no intention of becoming a high-end spot serving $30 pasta dishes. In fact, he’d intended for Ellie’s to be a deli, a place where stacks of calabrese, mortadella, capocollo, chicken parm, and meatballs were stuffed between slices of hearty bread.

But, like many chefs, his mind raced and he opted for a last-minute turn highlighting the more formal aspects of Italian cuisine merged with Californian sensibility and, with it, came the crowds that adored the food but expressed frustration with its tiny space as well as the neighborhood’s infamous lack of parking or ability to score a valet.

That’s all about to change as Ellie’s will move to a new home in the East Long Beach neighborhood of Zaferia, joining The Hideaway, Pho Hong Phat, and other culinary gems. The original location in Alamitos Beach will become the straight-up, all-out Italian deli Witzl originally envisioned. 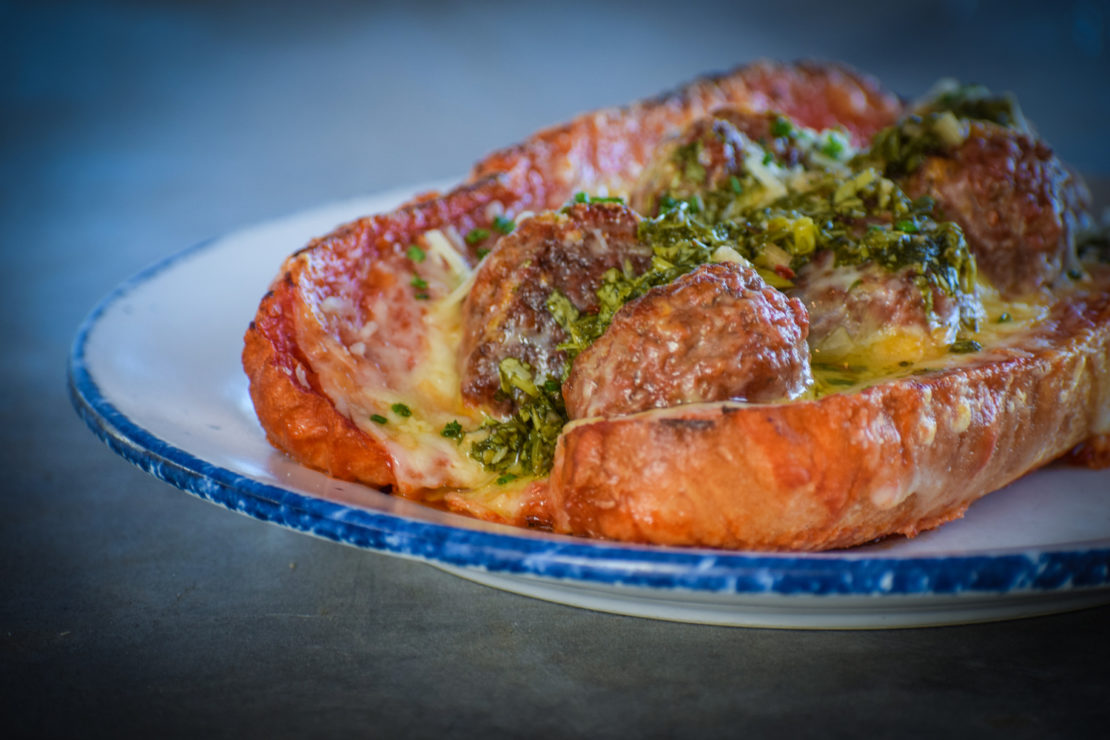 The meatball sandwich from Ellie’s Deli. Photo by Brian Addison.

Moving the original space away from high-end Italian and toward accessible, hearty deli foods is not just what Witzl called “necessary and right,” but ultimately a smart move in the world of COVID.

“I simply can’t look at my neighborhood [of Alamitos Beach] and ask them to keep this up,” Witzl said. “So many of my patrons and regulars have lost their jobs—and they were already spending heavy when they came in. I can’t ask them, when we re-open, to throw down on a $35 plate of pasta. I just can’t.”

But he does feel he can ask them to throw down $13 on the city’s best meatball sandwich: 6 beef-and-pork meatballs, smothered in a bright marinara and oozy, melted mozzarella, smushed into the canyon of a crusty-but-soggy-with-sauce loaf of bread. (Delivery tip: If you have a good oven, ask for the sandwich deconstructed and prepare it at home, throwing it under your boiler for a short period before eating.)

There will be an equally hefty Italian sub, layered with spicy calabrese, elevated pepperoni and peppered salami folded into circles of provolone and topped with a vinegary slaw, as well as pizzas, each with a hearty, puffy crust.

It’s, if anything, accessible food—and it’s a menu that is readily available right now. That’s right, you can order from Ellie’s Deli today. 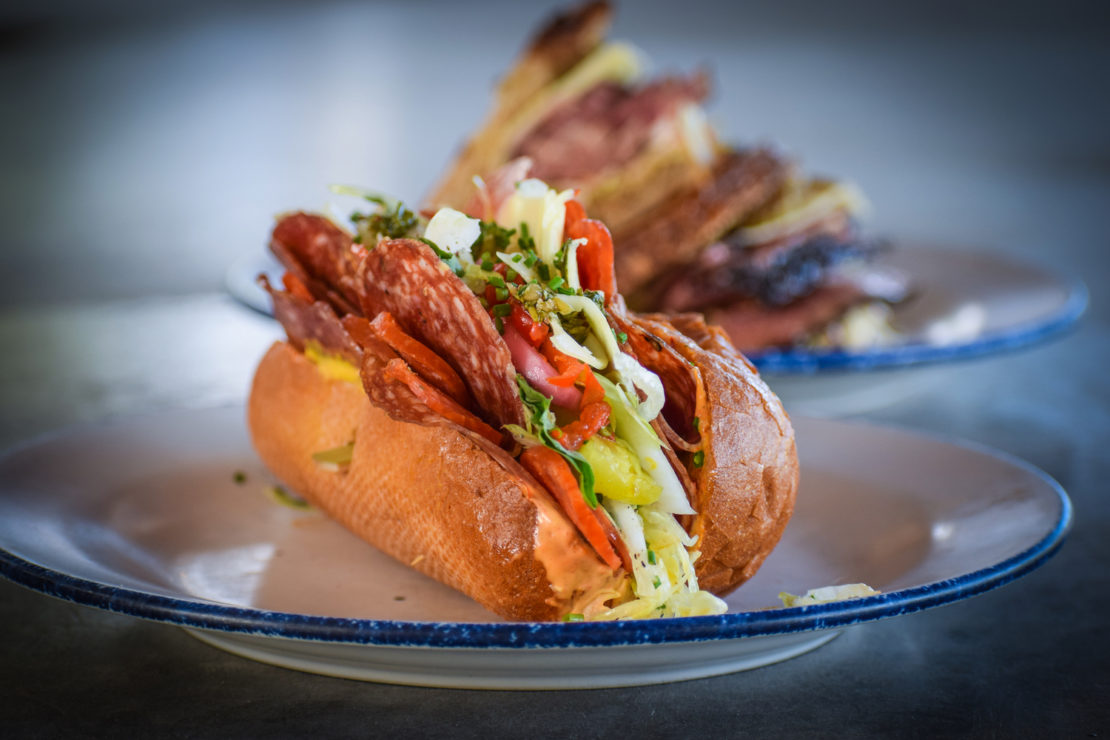 The Italian sub (front) with the pastrami sandwich (back) from Ellie’s Deli. Photo by Brian Addison.

Ellie’s in Zaferia will become more accessible as well since, as Witzl exclaimed with great enthusiasm, “We’ll have a valet!”

Besides that, Ellie’s will remain pretty much as is, which is to say, one of the city’s best and most beloved restaurants.

Ellie’s will become part of The Compound, an art-meet-food-meets-retail collective that is currently short on details regarding date for opening, as is landlord continues both construction and concept. Situated at 1395 Coronado Avenue, Ellie’s will occupy the former bright blue and beige art deco building just north of Commodity. 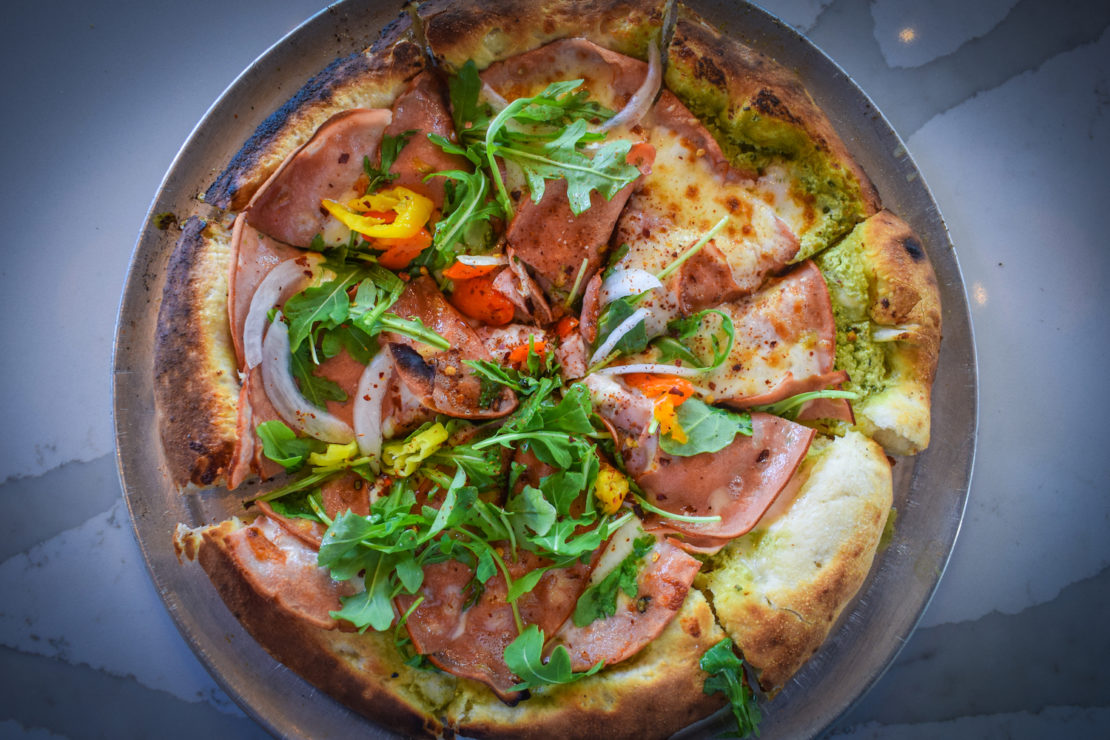 The mortadella pizza from Ellie’s Deli. Photo by Brian Addison.

“To be honest, I am unsure of how I am to open up four restaurants when dine-in options begin to start happening,” Witzl said, referencing not only the new Ellie’s location but Ellie’s Deli, Ginger’s and Lupe’s, the latter’s kitchen being utilized since stay-in orders became mandated. “But if anything, this is all about resilience and listening to your patrons. I feel like Alamitos deserves something more accessible, while Ellie’s deserves to offer something more comfortable. With this, we get the best of both worlds.”

Ellie’s Deli will be located at 204 Orange Ave. while Ellie’s new location will be at 1395 Coronado Ave.