If recent history in Long Beach’s gayborhood along the Broadway Corridor is any indication—Paradise bar having closed in 2018, the building that houses The Brit up for sale—things could be considered dire.

Some, like The Falcon, are fighting back by getting creative with resources and connecting with community neighbors.

A tiny space at the northwest corner of Falcon Avenue and Broadway, The Falcon opened up for the first time since March, on Sunday.

“It went very well,” said bartender Drew Hefton. “It was different from what The Falcon used to be but people were just happy to be back, to be at a place in our LGBTQ community.”

Typically packed on weekend nights and Sunday afternoons, with patrons using its small space as a dancefloor and/or a beer bust, The Falcon shares a brick facade with what was once The Pizza Place. With The Pizza Place shuttered since last year, due to the passing of its matriarch, Tina Lilis, its massive patio—bordering the Falcon to the west—has remained unused though full of potential. Falcon owner Michael Barber saw the possibility that he could utilize the patio with a local restaurant partner to serve legally required food that would allow the bar to operate.

“That patio was way too big to just sit there and go to waste,” Hefton said. “I love how spaced out it is and how nice it is to feel comfortable and safe while working.”

Thai Silk, the Thai restaurant just east of the Falcon, is the first restaurant to offer food service on the patio.

“For now, we are taking it day-by-day to see how this whole thing is gonna go,” Barber said. “We will probably be working with some other nearby restaurants to rotate the food being served so we can have additional options like a sushi happy hour or possibly a taco Tuesday.”

But when it came to more pointed questions, say, if Barber acquired the building himself and, if so, did the Falcon plan on blasting through its westward wall to become interconnected with the dining and patio space next door?— he replied he could neither “confirm or deny what you’re asking.” 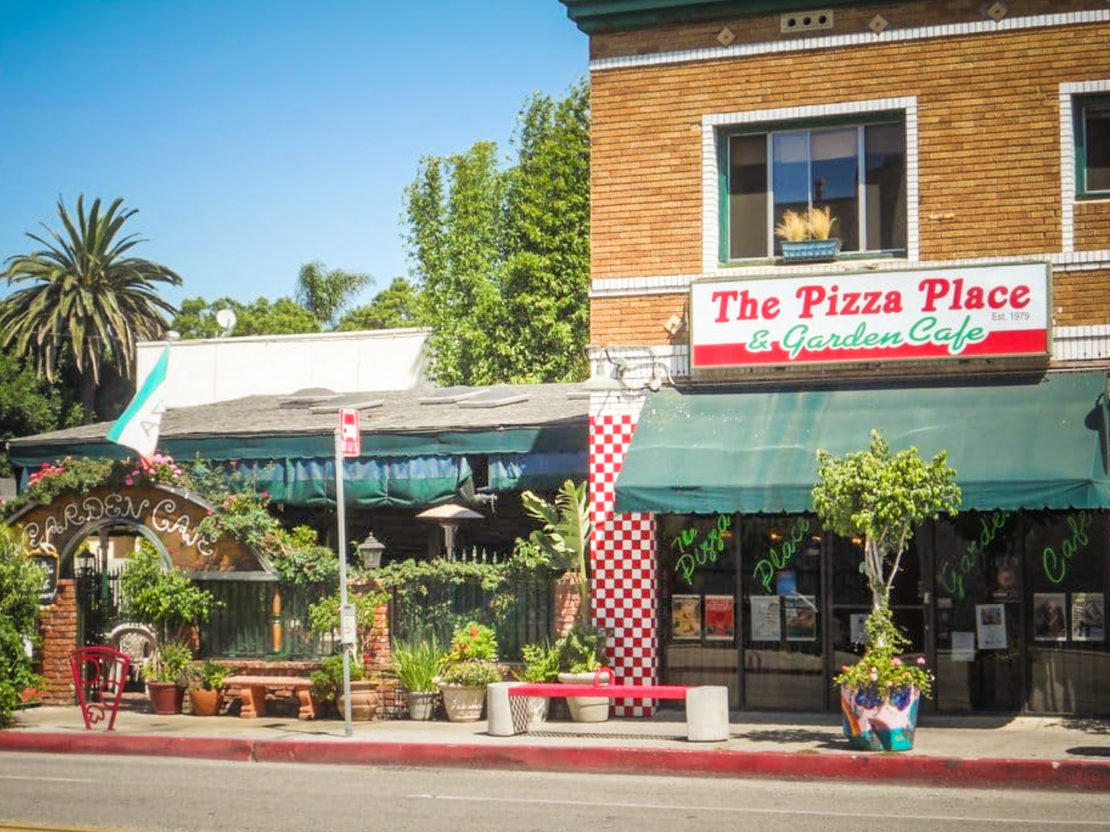 The Pizza Place & Garden Cafe, which closed in 2019, is the space currently being taken over by the Falcon. Courtesy of Yelp!/Irvin C.

While speculation continues on more permanent plans, the creation of the new Falcon space is a win-win: providing jobs—Hefton said he was glad to have a job “after five months of being stuck at home”—as well as a gathering place for the LGBTQ community.

For the queer community, bars are often the main spaces that they can safely and enjoyably interact with each other. Many in Long Beach have felt the pang of loss as COVID-19 effectively shut down bars earlier this year.

“I just miss my gay spaces,” said resident Lance Nassau. Those feelings have been amped up with the potential loss of The Brit.

But what Barber’s initiative provides is one thing that has been lacking: hope. Depending on its success, it could inspire other bars to search for potential spaces—The Broadway Bar’s back parking lot or perhaps a nearby business, for example—while fueling communally-driven partnerships, like that of The Falcon and Thai Silk.

“The situation is a win-win. Thai Silk delivers the food and we take it from there,” Hefton said. “It could be a model for other bars, like the way The Stave partnered with Michael’s in Downtown to reopen. Of course, there are things you need—outdoor dining space, specifically—but a lot of places could make it work.”