Missed one or two of these monthly lists? Many of these dishes might be included for delivery at your favorite restaurant. Click here for the full archive of Favorite Things I’m Eating. Looking for other food listicles to peruse while staying indoors? Click here.

Well, let’s just be honest here: these are weird times for not only food but social normality.

I’ve been self-quarantining for nearly a month now. (I get asked about this every day, so, one more time: The reason I do this is that My Dude works at Costco and is exposed to hundreds of people a day, so I believe it my responsibility to self-quarantine.) That means I’ve not only cooked a lot but ordered a good deal of delivery.

And with restaurants across the city having really upped their game to provide all of us with amazing food on the go, here are some of the favorite things I’ve eaten.

In no particular order… 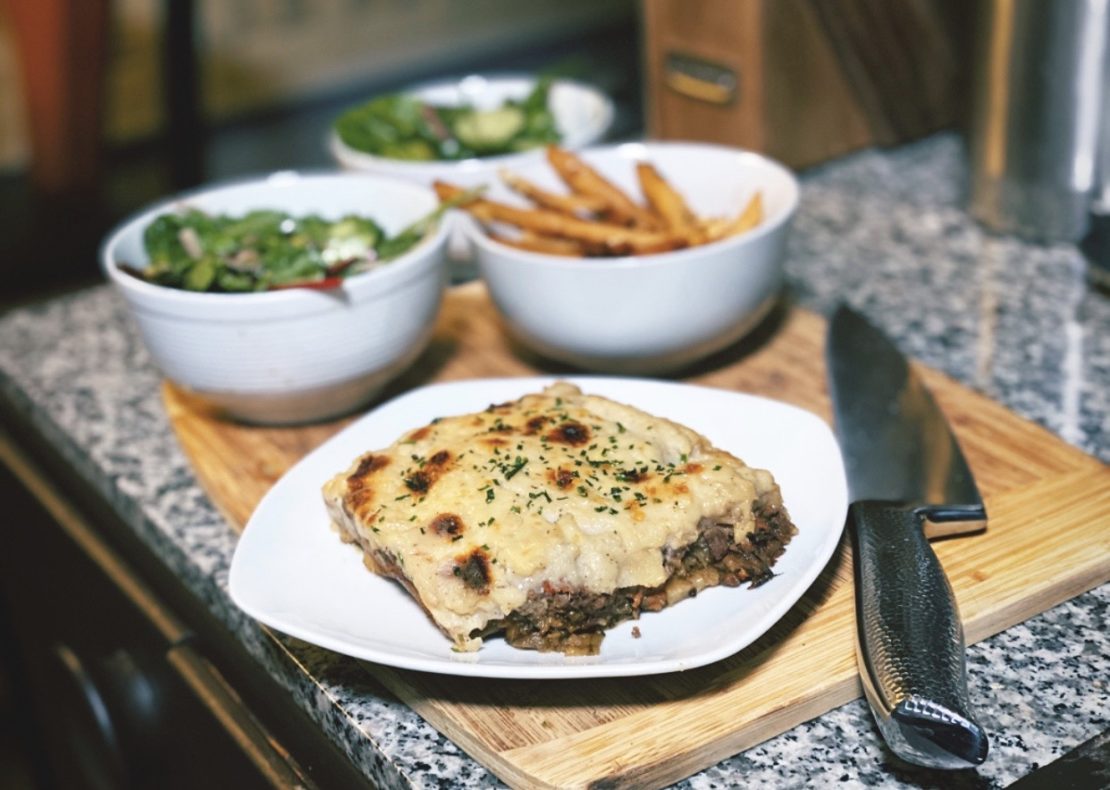 Ammatoli’s moussaka sits in front of a bowl of feta fries and shepard’s salad. Photo by Brian Addison.

If I were to dangle my hefty weight out on an even heftier limb, I would argue that Chef Dima Habibeh’s food is not only the best Levantine food you’ll find in the region but the best food in the city.

I know that’s a bold, especially in these times, but it is quite the feat that Habibeh’s food has been among the most consistent when it comes to delivery.

There’s her stellar versions of shawarma, as pictured in the feature photo. Her insanely beautiful addition of musakhan, the national dish of Palestine, where her perfectly roasted chicken sits atop thick pita slathered in olive oil, pine nuts, slivered almonds and a thick shake of sumac for tartness. It’s outright wondrous.

But her masterful version of moussaka is something that is well beyond comforting while stuck inside.

Most Americans who know the dish were likely introduced to it via Greek cuisine. But its origins are in the Levant, a region rich in food culture, encompassing Israel, Cyprus, Jordan, Lebanon and Palestine. It has its base with eggplant or potato—in Chef Dima’s case, both—and layered with ground beef and béchamel sauce. Her version is, I kid you not, the best I’ve ever had.

Warm, rich, and, likely, unlike any common delivery, it stands out as one of the most comforting foods I’ve had while staying inside. 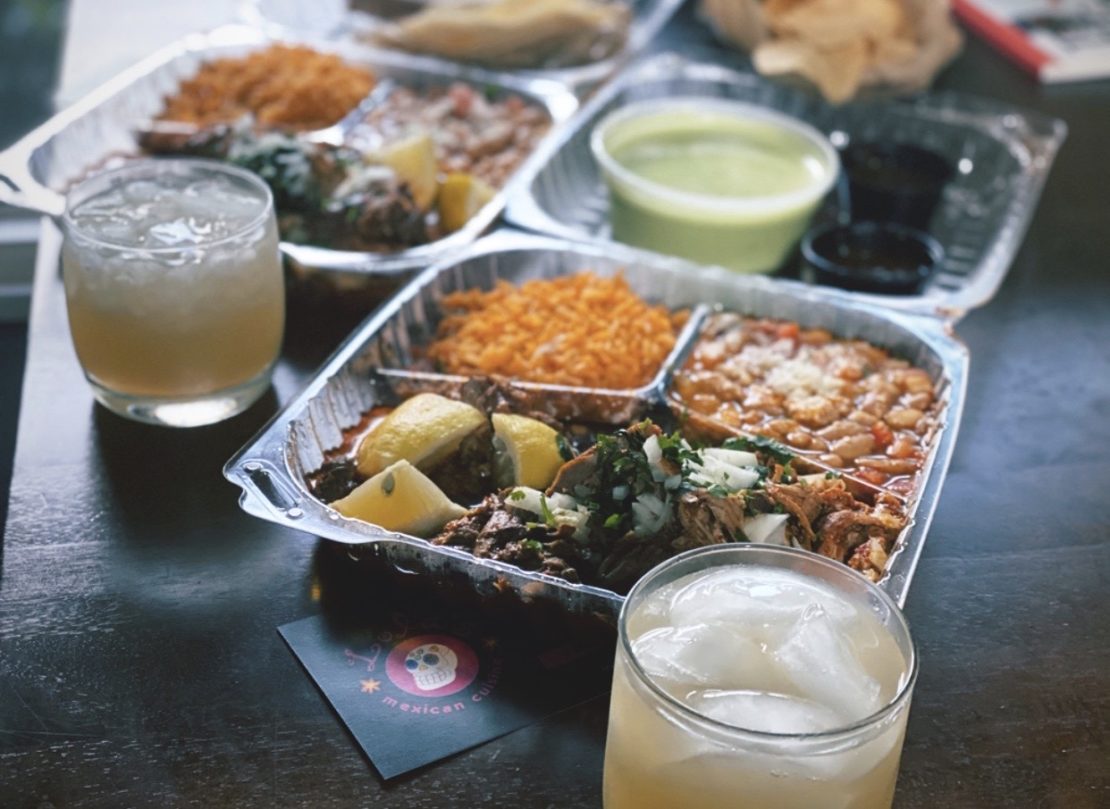 Birria dinner plates along with delivered margaritas from Lola’s. Photo by Brian Addison.

“I have nothing against the goat,” Lola once told me before she passed. “But this is the way birria should always be made in my opinion.”

One of my personal favorite traditional Jaliscan dishes, birria is typically made with goat and marinated for hours on end in a spice-heavy, Ancho-meets-Guajillo-chile that is nothing short of heaven. Lola herself, however, preferred a combination of pork and veal and this detail was essential in creating that Lola’s-specific birria.

Her son, Chef Luis Navarro has not changed much except for one key thing: presentation. Now, the birria stands in its more traditional glory, piled on a pool of its own juices, topped with a healthy dose of chopped onion and cilantro, with tortillas on the side. To have Lola’s birria served like this, pools of that magical broth for the taking with a spoon somehow elevates it by removing it from taco form.

Add some delivered margaritas and their stellar cajeta-stuffed churros and, I assure you, that you have a wondrous dinner inside the comfort—or confinement—of your own home. 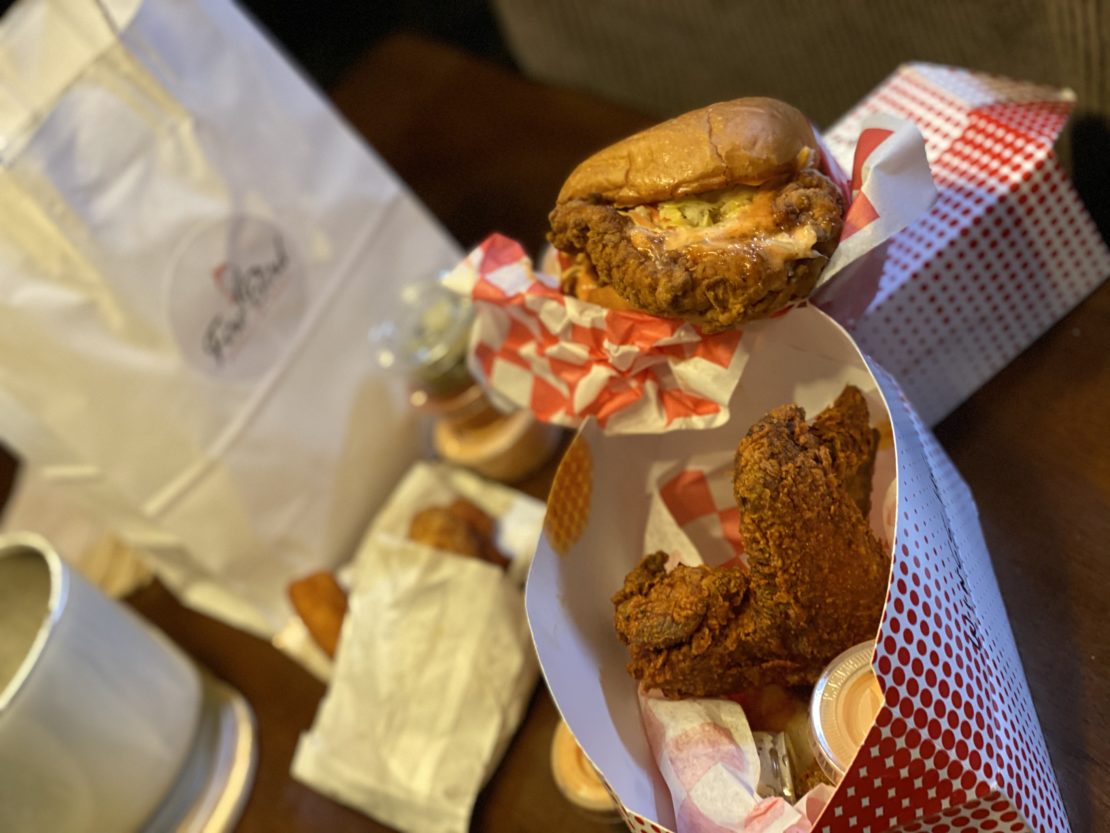 The fact that a piece of fried chicken holds as well during delivery as Thyda Sieng’s does, is nothing short of a miracle.

Thyda and her husband Chet Sieng’s ode to the Tennessee staple comes in many forms—a stellar sandwich a la Howlin’ Ray’s, mozzarella sticks, jalapeño poppers—but the true star of Fire Bird are their whole, three-joint wings.

Here, in the Nashville tradition, the talents of the cook are laid bare. You get nothing but two whole wings sitting atop a slice of white bread and topped with pickles, the latter accouterments designed to help with the heat. Completely on par with Hotville and, in some ways, surpassing Howlin’ Ray’s—yeah, I said it—Thyda’s fried chicken is so succulent, so perfectly crafted that I encourage some folks to order them without the heat so one can have the simple enjoyment of stellar fried chicken.

But I am a glutton for pain with an inner masochist so itchy to express itself that I find myself unable to escape the heat. Ordering wings at Fire Bird’s third level of five different heats, dubbed “Hot Chick,” I definitely found myself in a sublime state of pain and adoration. I can only imagine what the “Ex-Wife” and “Suicide” levels might induce.

With the wing, beware: unlike the sandwich, there is no barrier between your lips and that spice. For those willing to endure the suffering, it is a trip unlike any other. 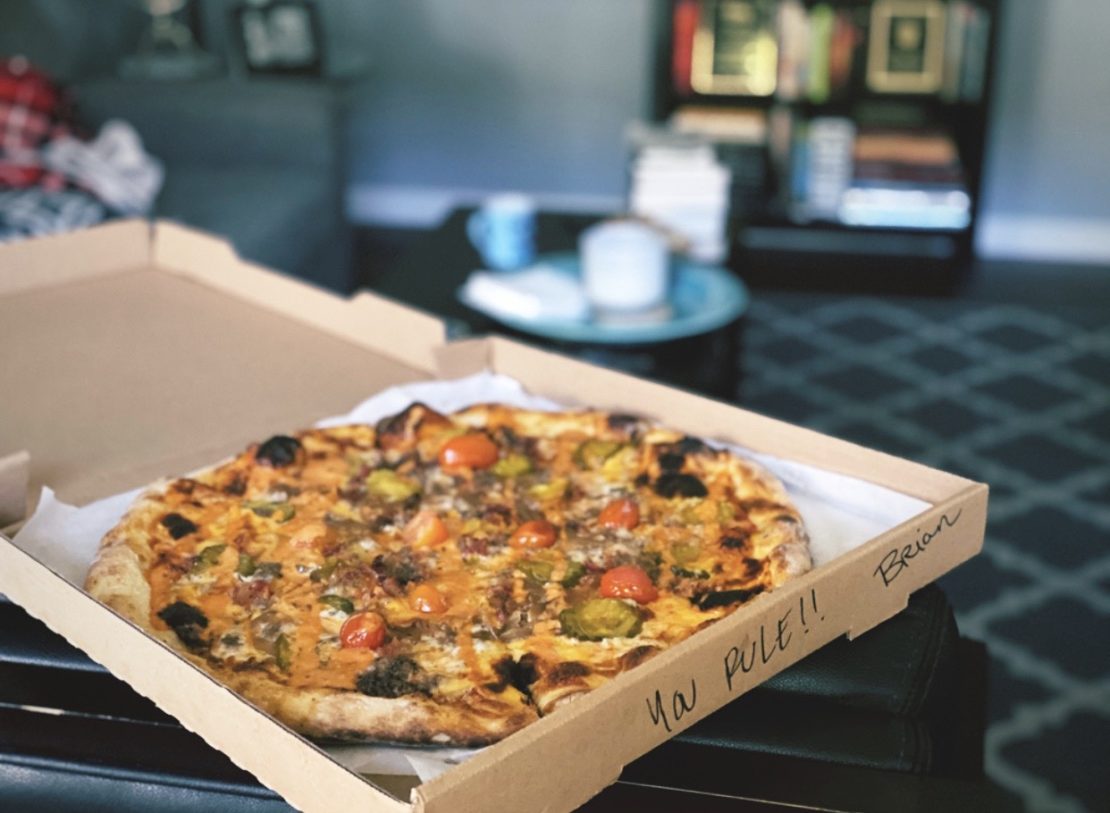 The cheeseburger pizza from The 4th Horseman. Photo by Brian Addison.

Cheeseburger pizza from The 4th Horseman

There’s much to be said about Chef Holly Ann Sharp, the woman who heads the kitchen of Ryan Hughes and Martin Svab’s outright wondrous pizza joint: She has a way of taking the oddest of combinations and turning them into stellar pies.

She’s done a gumbo pie in honor of Mardi Gras along with a muffaletta pizza in a nod to New Orleans—both were genuinely great. She’s done a “white trash” pizza that included Velveeta mac’n’cheese along with a few other assortments of low brow foods that came together in a shockingly fantastic way.

Her cheeseburger is no exception. Like an In-n-Out burger with pickles on it, this glorious ode to the central part of American food is slathered with Thousand Island dressing and crumbles of beef with layers of tomatoes, pickles, and all-around goodness. 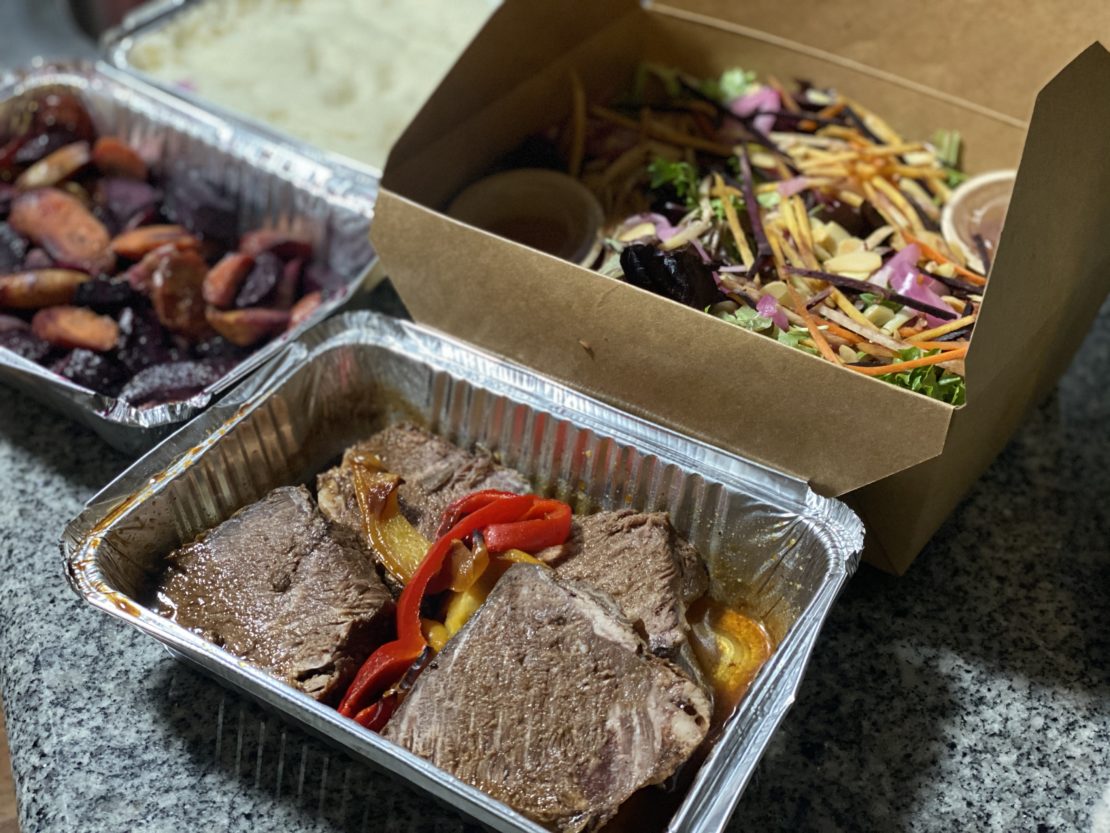 A provisions meal from Primal Alchemy, with short ribs front and center along with carrots, mashed potatoes, and a salad. Photo by Brian Addison.

What makes this option so distinct and so wonderful is not just the fact you’re supporting Primal Alchemy’s owners and their workers—Dana and Chef Paul Buchanan have been serving the Long Beach community for decades—but that their provisions packages differ daily, are delivered to your porch with no contact, and can be saved for a day or two.

Attached with instructions for each hot plate, you throw your tray in the oven and 35 to 45 minutes later, you have yourself an incredible meal for four people.

My order? Braised beef ribs in a char siu sauce that, carrots marinated in a honey butter ginger sauce, roasted garlic mashed potatoes, and an amazing salad (with the dressing in containers to help you save it for later if need be).

But if I had to pick one—just one—to have delivered to me in quarantine, it would be the food of Chef Dima. Beyond educating our community about the wonders of Levantine cuisine, her food has a consistency, a warmth and a depth that supersedes geography and culture.