There’s no need to panic: The Mac ‘n Cheetos at The Attic aren’t going anywhere, still Belmont Height’s uber-popular brunch and dinner space has not only revamped its entire space but also overhauled practically every bit of their menu thanks to its new culinary leader, Chef Cameron Slaugh.

For owner Steve Massis, the desire to refurbish the craftsmen-home-turned-restaurant has been long lingering—and the pandemic proved to be the perfect time to do so.

“Unfortunately, our chef of six years had to leave,” Massis said. “We started this plan on renovating the restaurant way before the pandemic and then, during the pandemic, found that it was the perfect time for a full-force remodel.” 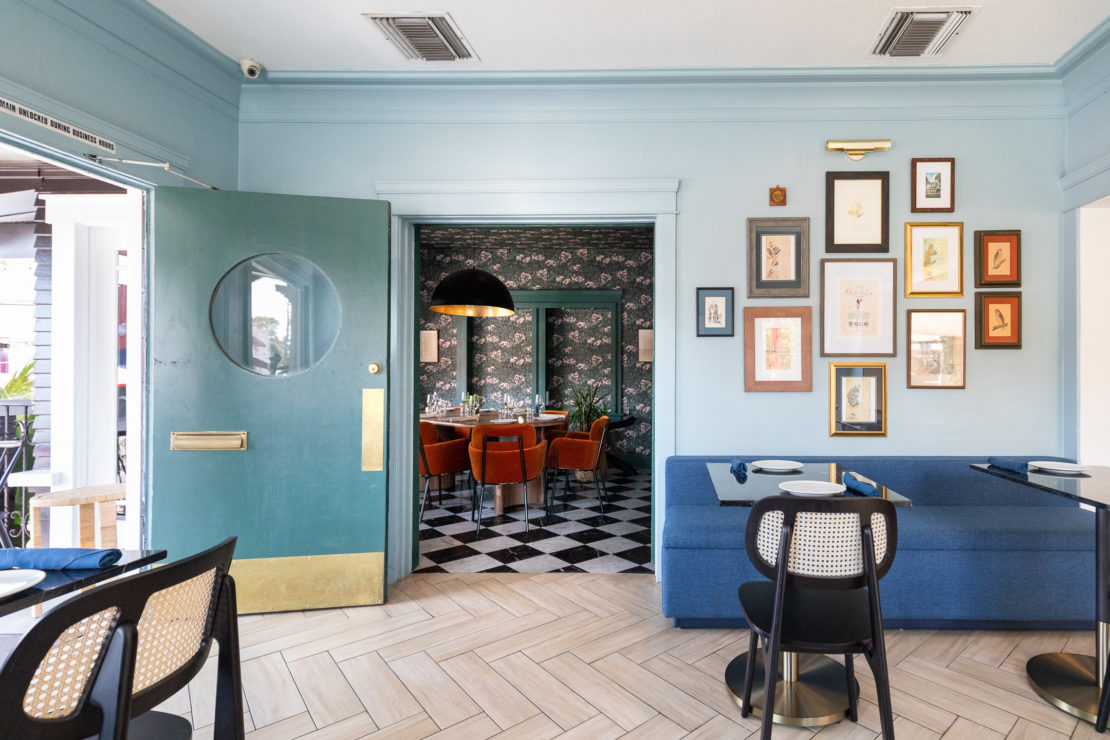 The new entryway greeting guests at The Attic in Belmont Heights. Courtesy of The Attic.

Gone is the white-and-wood bar room, replaced with a giant marble slab bartop accented with black tiling and paint. Gone are the multi-colored rooms in favor of baby blue throughout. Gone are the reddish wooden chairs, replaced with cane-backed chairs and, in perhaps the most dramatic change, orange velvet chairs in one dining room are decked in a rich forest green and white floral panel.

Outside, guests no longer enter into a white house but are greeted by a bold black exterior that feels more contemporary, more but restaurant-y—something that makes it stand out in the neighborhood rather than blend in.

With such dramatic changes to the physical space, Massis felt it necessary to bring changes equally dramatic to The Attic’s menu, a task that proves both challenging and respectful given his restaurant’s cult-like following, which is precisely why Massis took his time in finding someone as seasoned as Slaugh (pronounced Slaw). The culinary professional not only served as sous chef at much-lauded, New York fine-dining restaurant Eleven Madison Park during the time it received its third Michelin star, he famously led LA’s Osteria La Buca’s partnership with none other than Long Beach’s own Organic Harvest, a local farmer group that offers plots for restaurants to grow their own produce. 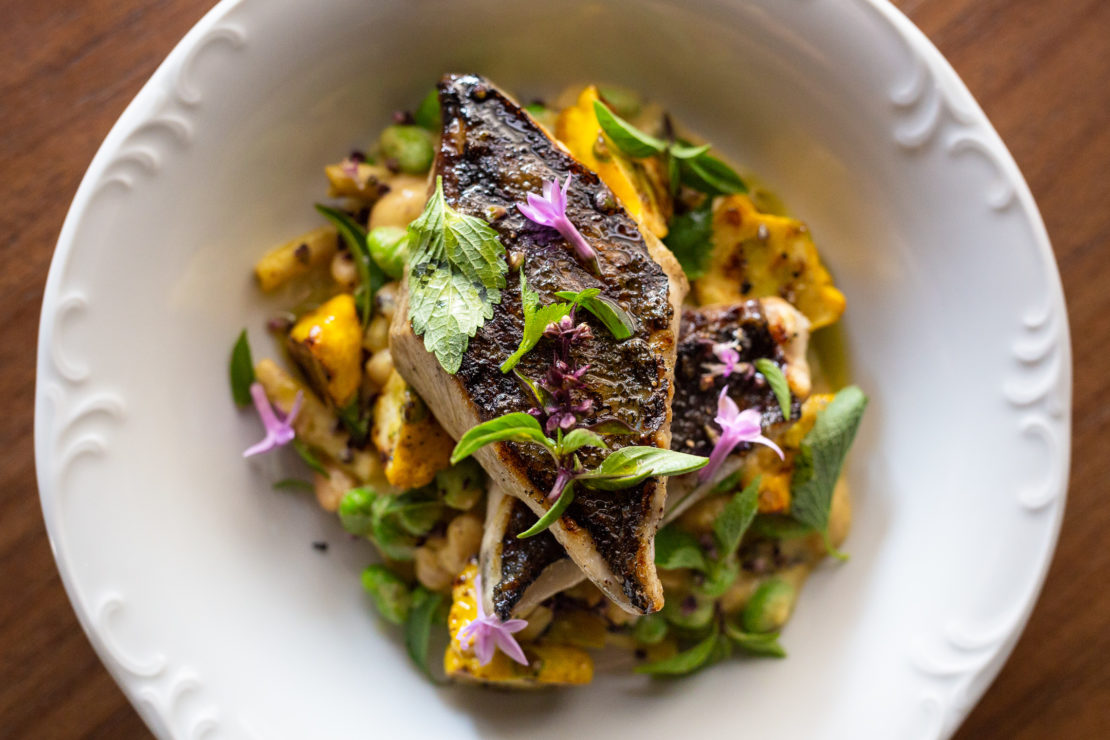 The grilled bream plate at The Attic. Courtesy of The Attic.

“I understand there are some die-hard Attic fans, and I am willing to admit that some may not be too keen to taking on a new menu,” Slaugh said. “But there’s definitely going to be a crowd who are excited for the new menu and vision for the restaurant. I grew up farming, my father is still an organic farmer up in Washington, and that seasonality, bringing the Peak of the Season to a table is an inherent part of my cooking. Personally, I feel we’ve made The Attic more detail-oriented while lifting the standards and quality of the kitchen.”

While the menu is still solidly Southern and, yes, yes, the Mac remains, the rest of the menu is a welcomed update that feels more like current day New Orleans than it ever did before. While The Attic offered a line-by-line import of classic NOLA grub—andouille sausage gumbo met crab cakes and fried chicken—Slaugh’s takes on those dishes that feels both modern and personal. 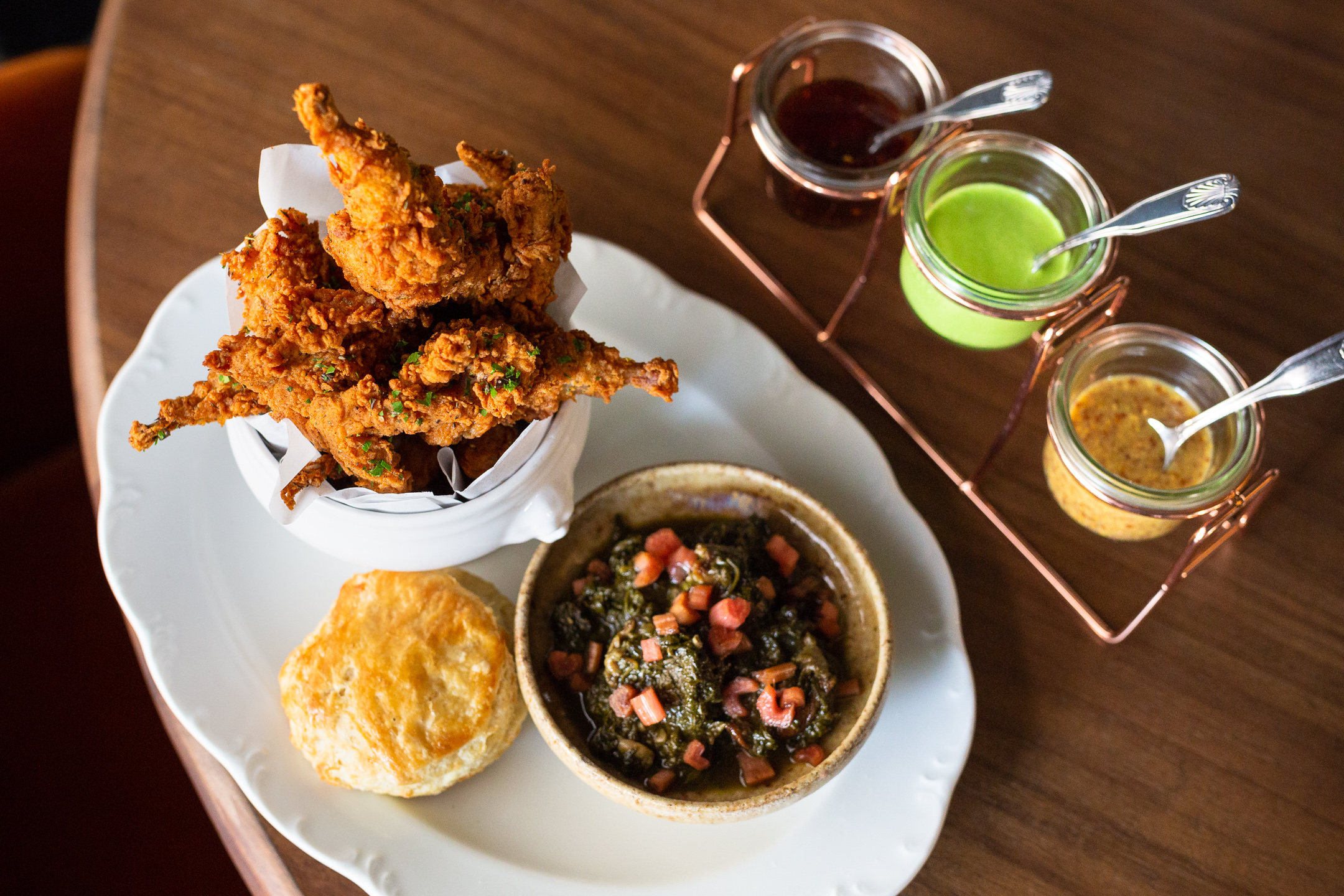 The Attic’s fried quail with braised greens. Courtesy of The Attic.

Fried quail bits sit in lieu of fried chicken, stacked next to a bowl of braised greens on a plate. Bowls of beef tartare and pimento cheese are served not with crostini or crackers but a house-made lavash thickly caked with an heirloom sesame seed known as benne. That lavash joins other house-made breads, from a skillet cornbread with caramelized honey to thick slices of country bread that act as accoutrements for their bone marrow.

The obvious call for a catfish or Gulf fish like redfish is replaced with the much brighter, much leaner bream known as orata, quite popular in Italian cooking. And instead of a crawfish boil, Slaugh offers patrons partake in a table-wide clambake gone Cajun.

There’s even a playful if unintended ode to Long Beach with Slaugh’s brick chicken. The most loved dish at the departed At Last Cafe, replaced by Ellie’s, was its brick chicken, a dish that sat in the culinary heart of the city’s eaters. Slaugh’s take is one of his warmer, heartier dishes, along with house-smoked pastrami used on both a lunch sandwich and poutine appetizer.

“At the end of the day, we just want to be hospitable and cook good food for the community and ourselves,” Slaugh said.