There is a vibe at the Uptown Commons that is both refreshing and leads one to wonder about its future success. On one hand, you have a vibrant, shipping container-structured space at the northeast corner of Atlantic Avenue and Artesia Boulevard—a stone’s throw away from one of the city’s best restaurants, Robert Earl’s BBQ, and surrounded by fast-food giants, including a Wendy’s on the same lot—that brings some wonderful life to a lot that has little to offer besides dirt.

It has a stellar patio that seems prescient in design given the pandemic, with two established brands opened—Oi Asian Fusion, with locations throughout the L.A. region and hot chicken space Main Chick, with locations in both L.A. and Pasadena—and two more on the way—O.C.-based Chef Fernando Valladares’ Portside Fish Company and Chino-based Shomi Noods, a ramen bar known for its various takes on Hakata-style tonkatsu ramen. 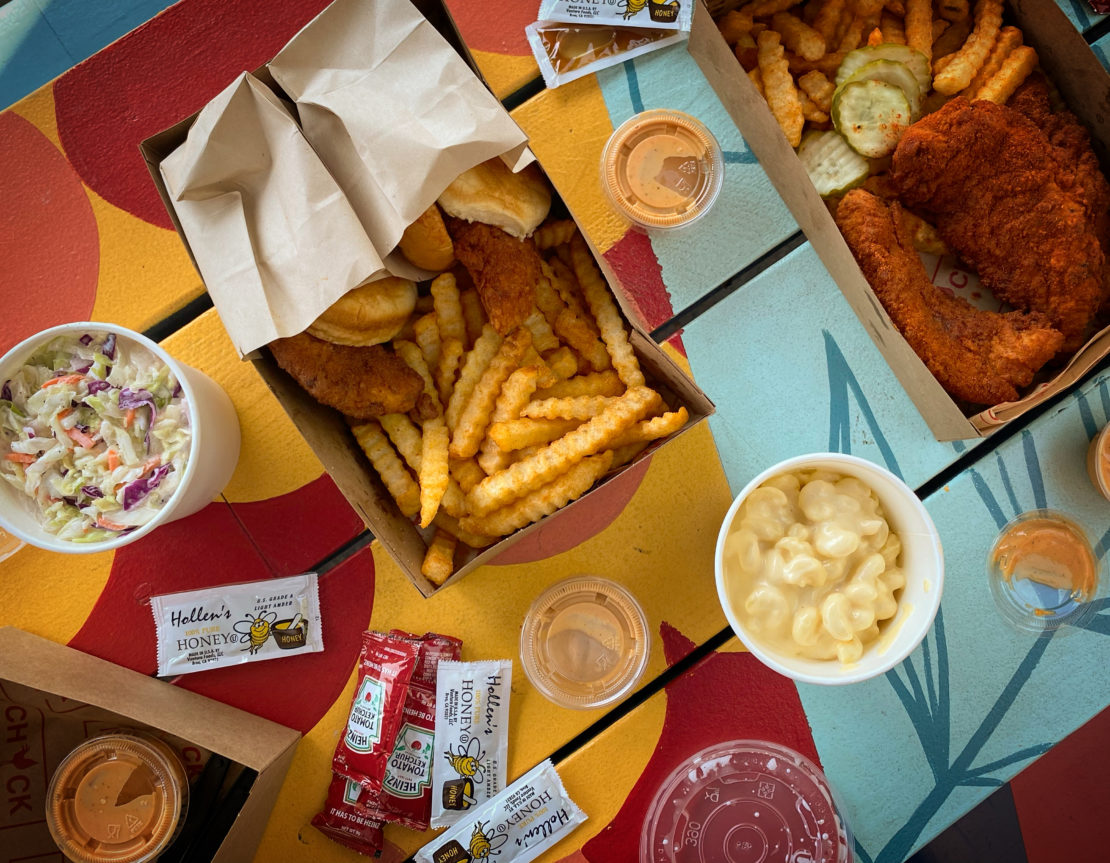 An array of offerings from Main Chick at Uptown Commons. Photo by Brian Addison.

On the other hand, the idea that a mini-swarm of regional food brands—Nashville hot chicken and ramen make up two of the most saturated cuisines in the local food scene—might be viewed as hipster-ish choices that won’t connect given nearby joints like Earl, Soul Food Renaissance, El Taco Loco #2 and Pupuseria el Kiosko. I’ve heard this murmured and, in some sense, I understand; those four spaces, along with much of North Long Beach’s underrated and undersold food spots are among my personal favorites.

Still, North Long Beach, led by the office of Councilman Rex Richardson, has made it clear it’s open to not only the new but the different—whether that difference is viewed as adding to the local charm or capitalizing upon it is a conversation that the residents of North Long Beach will have to have among themselves. 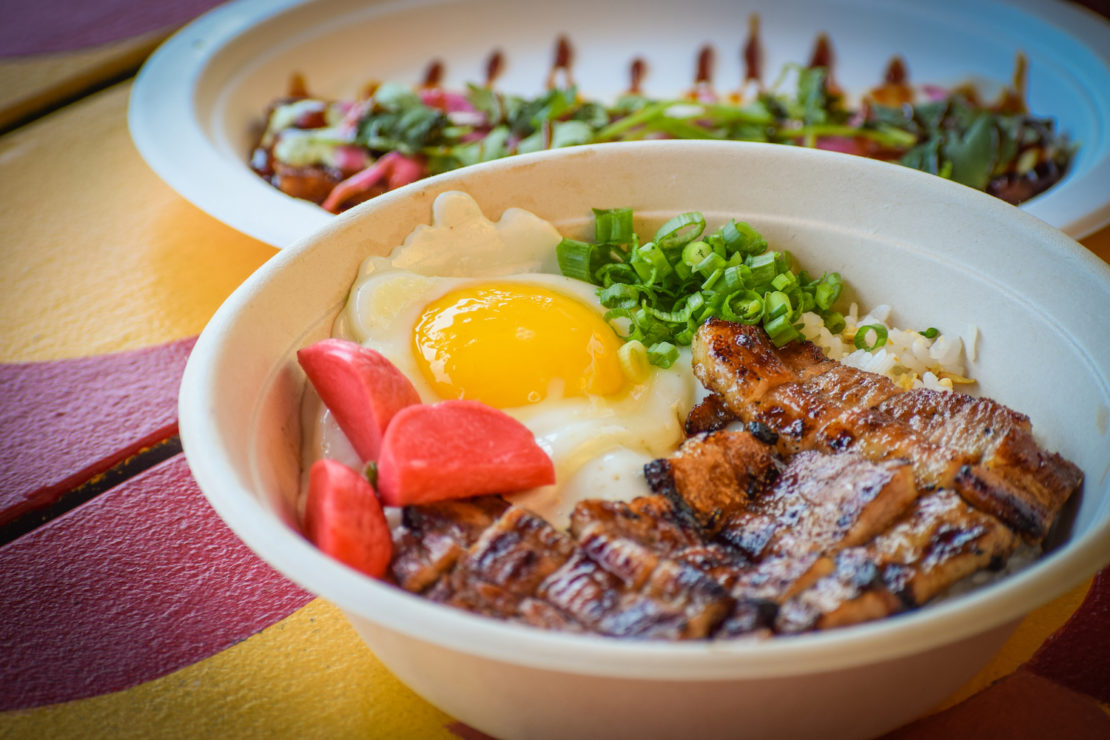 Is Main Chick on the level of Fire Bird in Bixby Knolls? No, but it offers something different without having to take a 4-mile drive down Atlantic and is surely as good as the plethora of other hot chicken establishments that so badly want to be on the level of Hotville.

Is Oi offering some life-altering Asian fusion grub? No, but it is the standout of Uptown Commons (and the intersection) so far, with the quality and offerings for the prices being a wonderful addition to a community dominated by American and Mexican cuisines.

Even more? They’re certainly better than the (literal) McDonald’s, Subway and Wendy’s that surround it on all sides. 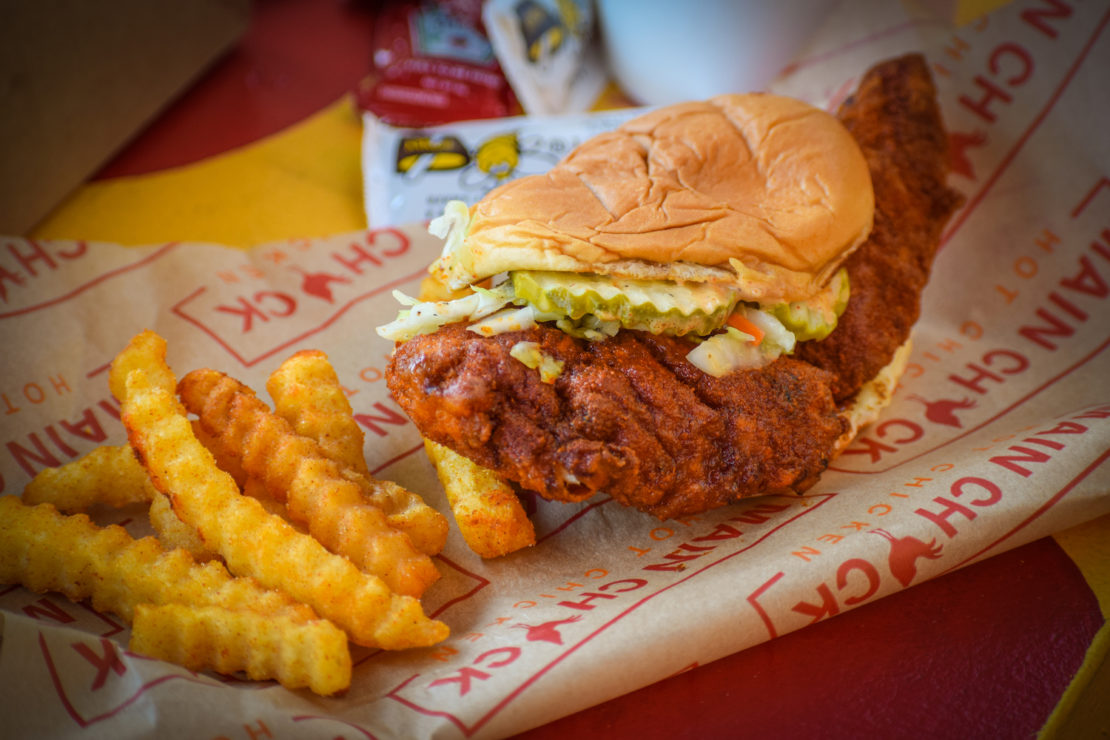 In other words, the food at Uptown Commons is good—and it is worth exploring, especially Oi (which is an exclamation in Tagalog that basically means “Yo!”).

The Filipino-tilted space, with hints of Japanese and Korean influences, has been vastly expanding its presence across California over the past year since taking the Valley by storm—and its owner, Eric De La Cruz, offers a wonderfully solid array of bowls and sides, including some genuinely unique and beautiful plates.

Take, for example, its pork belly tacos: Fat rendered just right, layered with an eel-sauce like drizzle on top pickled onions, generous droppings of cilantro, and a slice of jicama that would traditionally be the tortilla, sliced so thin, mind you, you might not even see it. It’s a gorgeous layering of salt, umami and sweet and it showcases beauty in presentation one might find shocking for a joint inside a shipping container. 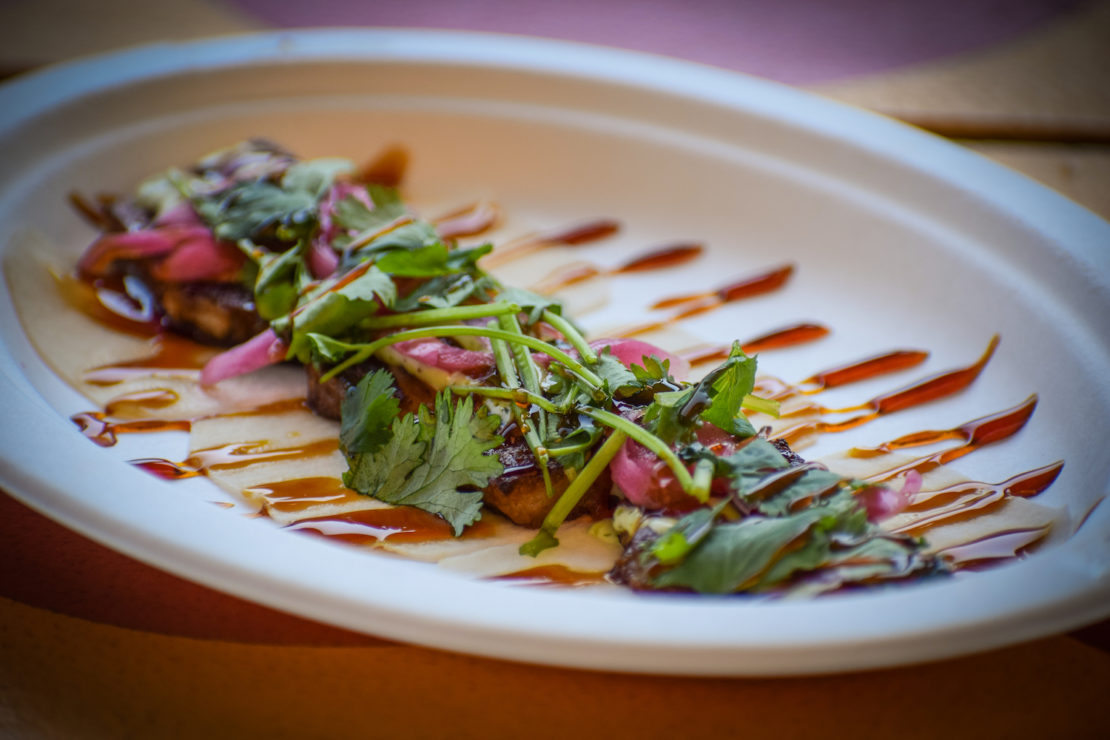 This use of pork belly can also be found in their tosilog bowl, where layers of sweet and salty pork belly sit atop a bed of rice with a soft boiled egg whose thick yolk is the perfect pairing with space’s spicy red vinegar sauce.

The other Pinoy-centric dishes—solid lumpia, and specifically, great variations of adobo and tapsilog bowls, every one paired with either a beautifully soft-boiled or sunny side-up egg—sit side-by-side with more witty offerings on the menu, like a burger slathered in umami gravy and an “upside down” ube cake, whose bright purple, softened cheesecake-like quality is worth ordering dessert.

Oi is unlike anything North Long Beach (or even nearby communities, outside of West Long Beach) offer—and that is something to be applauded. 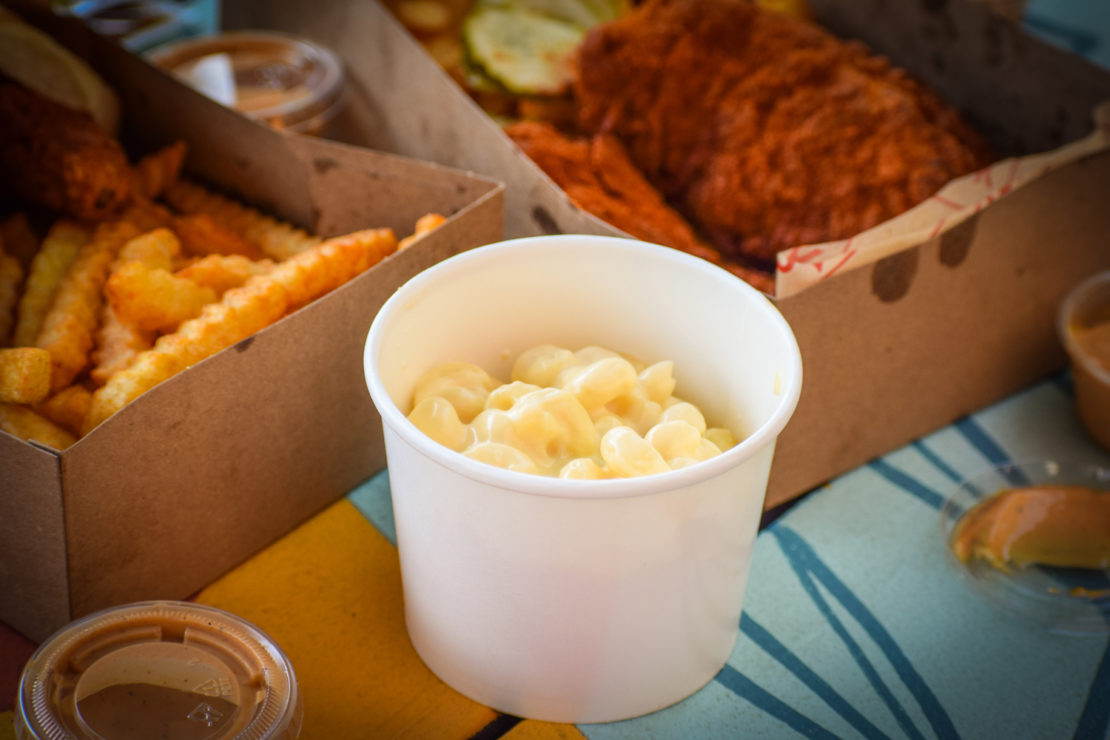 A bowl of Main Chick’s mac and cheese. Photo by Brian Addison.

And onto Main Chick, which, let’s just get right out the way, is one of countless hot chicken shacks throughout the region in terms of what they offer. Main Chick is not Howlin’. Or Hotville. Or Fire Bird.

The restaurant serves solely tenders—massive, oblong slabs of chicken breast that are fried quite nicely and can be eaten solo. Two people could split the three tender lunch, no joke—or on a sandwich—two people can share the two sandwich combo as well. It offers four levels of heat: mild, medium, spicy, and supreme, the last of which they say you need to sign a waiver. I got the spicy and its heat didn’t remotely phase me; it wouldn’t even be near Fire Bird’s or Howlin’ middling heats.

Their sides are solid, from a mac and cheese reminiscent of a milder Beecher’s to a nicely sweet though not excessively so slaw that can cut through the heat of the meat for those who are super sensitive to it. 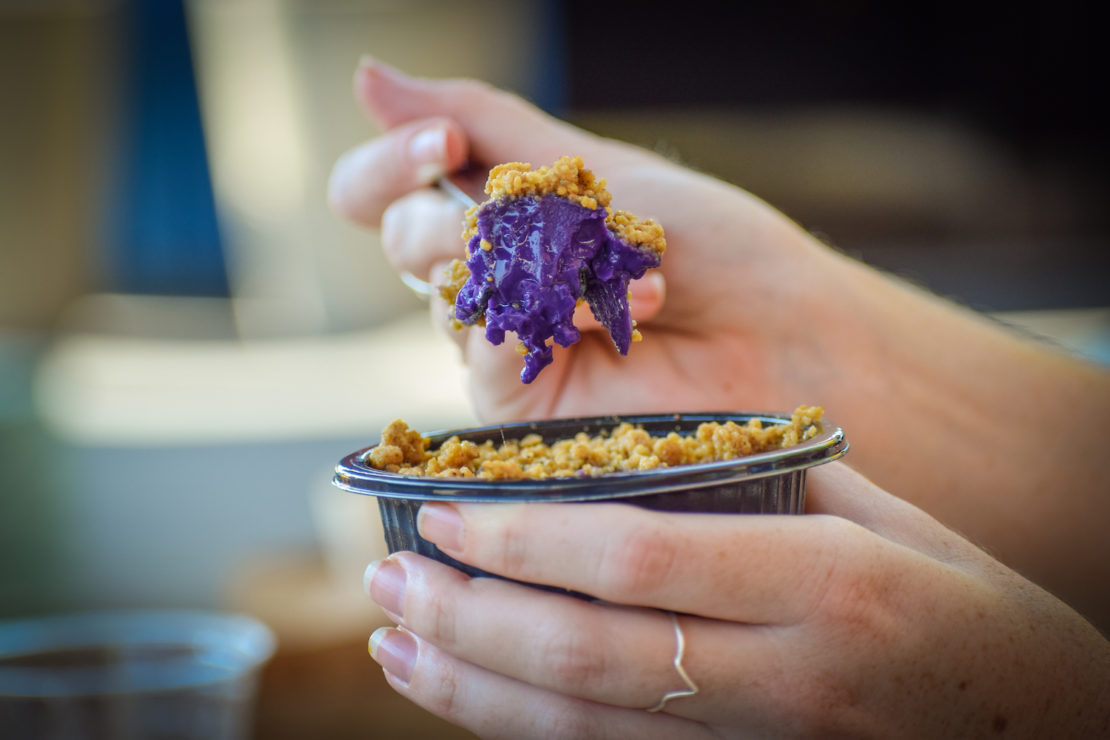 The “upside down” ube cake from Oi Asian Fusion. Photo by Brian Addison.

In other words, the food at Uptown Commons, Wendy’s excluded, is solid and sometimes really good. And it’s refreshing to see, amid the yellows and reds of bordering chain logos, a place where one can score what is inarguably the best chicken on the block—though I won’t be abandoning my love for Louisiana locations—and certainly the best Asian fusion grub in the community.