“Nothing great was ever made without challenges.” Those are words Ian Mafnas lives by, and they’ve taken on new meaning as he and his wife Qiana Mafnas fight to bring their specific style of Texas smoked barbecue to Long Beach in the face of some confusing regulatory challenges.

Axiom Kitchen Smoked Meats and BBQ is already a popular pop-up that appears weekly at the Lakewood YMCA, but the road even to that point has been a long one.

Ian and Qiana have known each other for over 11 years. When they first met, neither was in a good place.

“Both of us were addicts,” said Qiana Mafnas. “We had issues with the law. We know the wrong way.”

She says the couple separated to work on themselves, and when they reunited, they were both committed to doing things the right way for themselves and their children.

The couple married in October of 2021 and Ian began smoking meat for his family. Qiana says she had no idea Ian could make food that tasted so good and instantly wanted the family to open a restaurant.

Ian was hesitant, not confident the public would love his food as much as his family, but after heavy persuasion from Qiana, he agreed to start Axiom Kitchen as a pop-up.

The tasty meats—slow-cooked over charcoal, pecan, oak and applewood— have been a huge success, but Ian and Qiana say they haven’t yet achieved their ultimate goal, which has always been to open a full-fledged restaurant in Long Beach that would serve as a tribute to Qiana’s son Noah Sekona who passed away in 2018 at 18.

“He wanted us to be able to live our lives happy and not have to work so much for others,” said Qiana Mafnas. “He wanted me to be home more and I worked a lot of hours.” 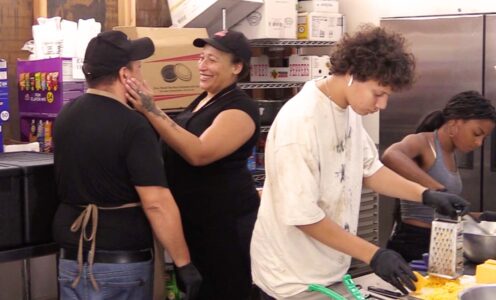 The Mafnas family prepares for their weekly popup. Photo by Jackie Rae

Making that dream come true has been difficult, and at times confusing. The couple says they have been told by the city that they cannot get restaurant permits for their offset smoker—which uses charcoal and wood to put indirect heat on the meat—due to the California Clean Air Act that regulates emissions.

Staff at the Long Beach Health Department said approving a restaurant to use an offset smoker is complicated, with no clear yes or no answer. Supervisor Monica Cardenas says she needs more information from Axiom Kitchen to determine if the use of the offset smoker is permissible.

After the Long Beach Post contacted the Health Department, Ian and Qiana said health officials reached out to them to try to resolve the issue.

Despite the confusion, Ian says he doesn’t hold it against Long Beach. He said the strict regulations have helped make it “a wonderful city” that values the environment.

In the meantime, Ian and Qiana say they won’t cut corners on how they make their food and will keep working to bring Axiom Kitchen Smoked Meats and BBQ to a permanent location because, they say, “Long Beach deserves authentic Texas smoke style barbecue.”

Axiom Kitchen’s pop-up is open every Friday from 4 to 8 p.m. at the YMCA located at 5835 Carson Street in Lakewood. They will also be at The Wine Country in Signal Hill this Thursday from 11 to 3 p.m.

For more information on Axiom Kitchen online or on their Instagram page.