People missed their local watering holes throughout the pandemic. The businesses built around mind-altering libations and bringing people together to commune were shut down for months.

But the beer scene in Bixby Knolls has persevered through the worst of the pandemic.

From to-go booze to partnering with nearby restaurants to becoming mini-marts and Christmas tree lots, the beer-centric establishments found creative ways to sustain themselves while their original business models were not available to them. But now that they are back, they are back strong, according to Ambitious Ales co-founder Garrett Carroll.

“There is a lot of loyalty to the small businesses community in Bixby Knolls,” he said. “A lot of the businesses live and [die] by the neighborhood. There’s a strong sense of community and that’s one of the big reasons we’ve been thankful to be in the area.”

Bixby Knolls has two full-fledged breweries—Ambitious and Liberation Brewing Co.—and several other establishments that emphasize the hoppy beverage, including Dutch’s Brewhouse, Rasselbock Kitchen & Beer Garden and Smog City Brewing Co. While the others had some respite thanks to their business models including food, the breweries were shuttered for more than half of 2020.

It wasn’t until October that breweries were allowed to reopen their doors with one catch—they had to serve food. Both breweries successfully partnered with food vendors and commenced in-person sales after offering only to-go brews. Of course, the pandemic worsened during the winter but the new year brought revised guidelines and a full reopening in June after vaccinations were more widespread.

Once the reopening started, Carroll said the beer scene’s regulars were the first to come back. But shortly thereafter, new faces began coming in, some from as far as Culver City—a sign that many were missing the craft beer scene.

“It’s definitely bounced back big time. It’s clear lots of people were ready to get out,” Carroll said. “Especially when vaccines were more readily available, we got people saying, ‘This is the first place I came after getting my vaccination.’ I can’t believe how many times I’ve heard that.”

The area’s business district, led by Executive Director Blair Cohn, pushed the community to support the breweries and restaurants by ordering food and drinks to go and to patronize when allowed. One of the Bixby Knolls Business Improvement Association’s most prominent beer-focused offerings is coming back after a year and a half: the Big Red Bus Trolley, which carts passengers around to enjoy all of Brewery Knolls’ offerings over four hours.

“It’s fantastic having a beer culture here,” Cohn said. “We had fished around for our ‘thing’ for years—at first we thought it could be ‘Little Italy’ because there’s a lot of Italian and pizza places. But when the beer started coming, it was perfect.”

Here is a rundown of Bixby beer businesses: 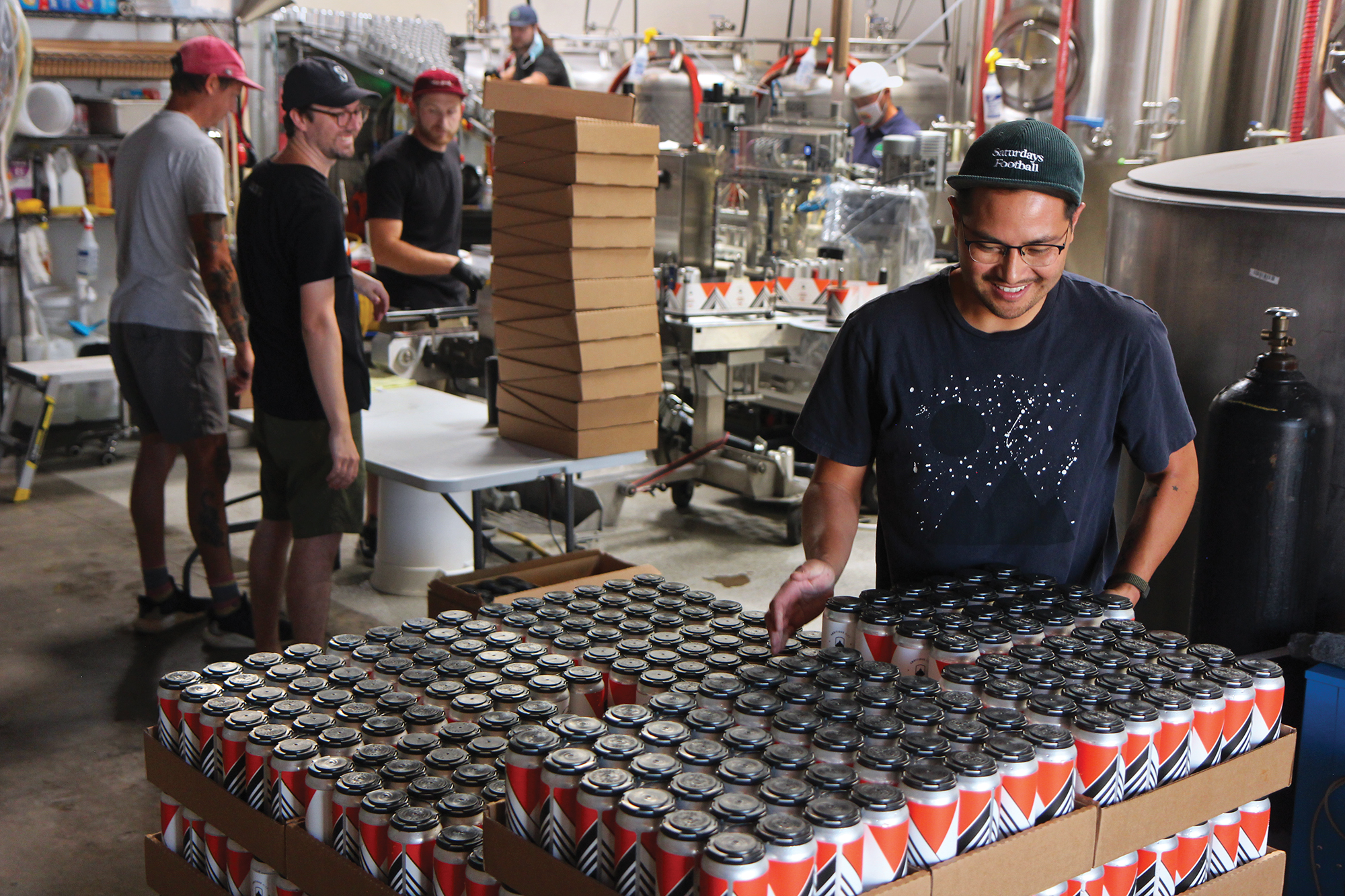 With the brewery closed to customers on Wednesday, the owners of Ambitious Ales can their beer, July 4, 2021. Photo by Brandon Richardson.

This microbrewery was founded by five friends and celebrated its grand opening in February 2019, so the small team had only a year to establish themselves within the tight-knit community. But being strictly a taproom with no food offerings at the onset of the pandemic, Ambitious had an uphill battle.

The team was able to turn to canning some of its beers for sale in four packs or singles for customers to mix and match. Customers are able to order online for quick and easy pickup requiring minimal contact. When breweries were allowed to reopen in October, the Ambitious team had to figure out how to bring in the required food element. Fortunately, Thunderbolt Pizza opened next door later that month, and teamed up with the brewery to offer food in a new beer garden behind the brewery.

Head brewer Garrett Carroll has 14 beers on tap as of the end of July. From the blonde coffee-infused Central Perk to the 12% Korben, the brewery’s two-year anniversary imperial stout that was aged in bourbon barrels for 16 months, the team lives up to its mission to push the boundaries of craft beer by reinventing classics with their own twist. Other offerings include pale ales, IPAs, gose, pilsners and lagers. 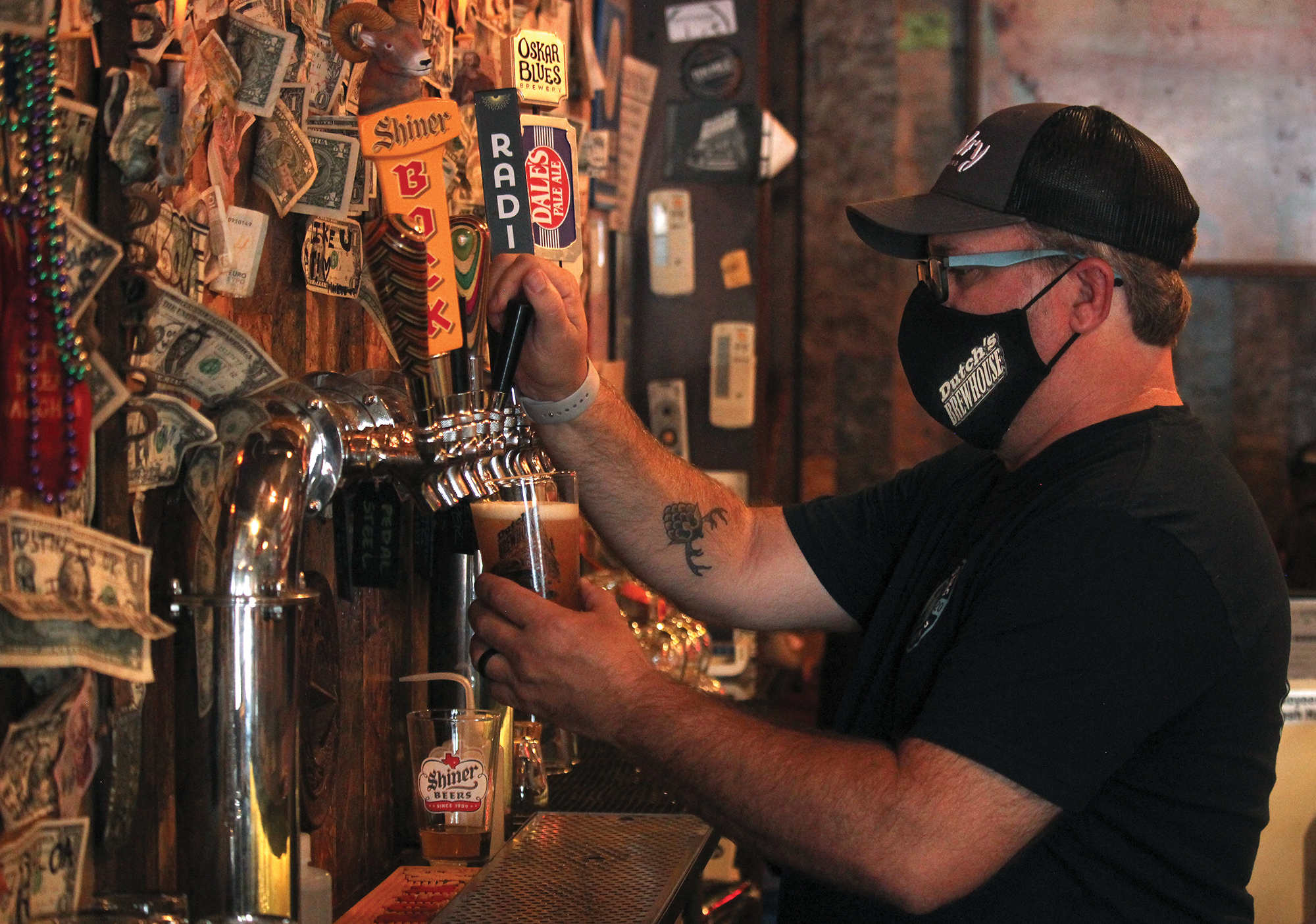 At any given time, Dutch’s has four to six micro batches brewing for sale on site. The microbrewery opened in 2015 and also carries other brands, including owner Jason “Dutch” Van Fleet’s new brewery Syncopated, which is located in Lakewood, Modern Times Beer, Oskar Blues Brewery, Radiant Beer Co. and Texas-based Shiner Bock from the Spoetzl Brewery.

Also a popular eatery known for its pizza, it was not a tall order for Dutch’s to fall back on takeout business, especially once they purchased a canning machine. When beers arrived in kegs, staff would get to work canning them for retail sale to go. To further drive its takeout businesses, Dutch’s implemented free delivery for orders within two miles of the storefront. While the free deliveries continue, the staff no longer cans beer.

One of Dutch’s unique features is its onsite brewing class. Prior to the pandemic, small groups could sign up to have staff walk them through the beer-making process. Once the beer ferments, the customer returns for a small batch that’s bottled and ready to drink. However, due to the close proximity necessary for the class, there are no plans to bring back brewing sessions anytime soon, one employee said. 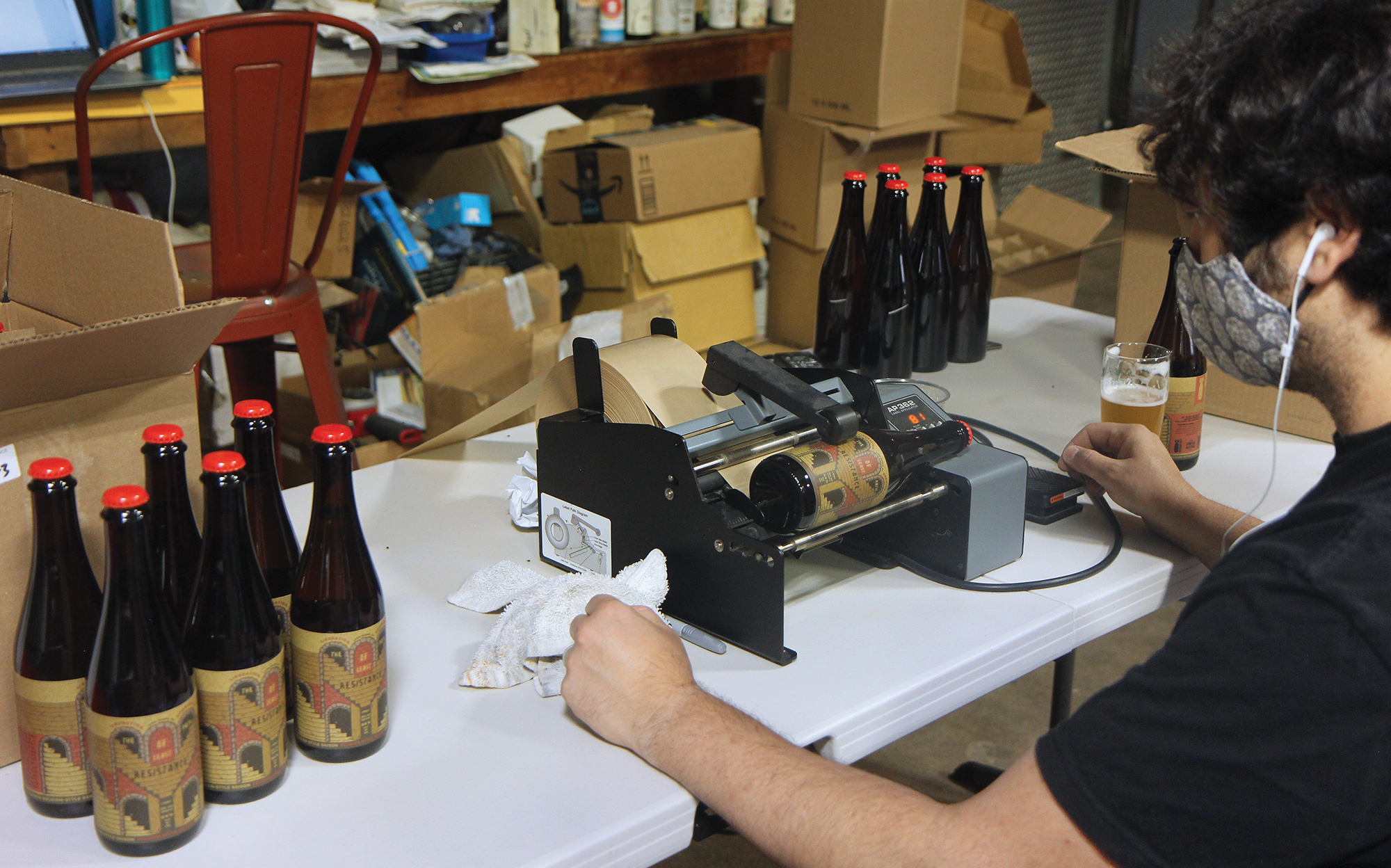 The brewery offers numerous lagers, ales, IPAs and more, some with Long Beach-inspired names such as the Jackrabbit and the Cyclone Racer. Throughout the pandemic, Liberation continued the sale of its beers in growlers and Crowlers—large containers, such as jugs or cans, that hold 32-64 ounces of beer—as well as cans and bottles. 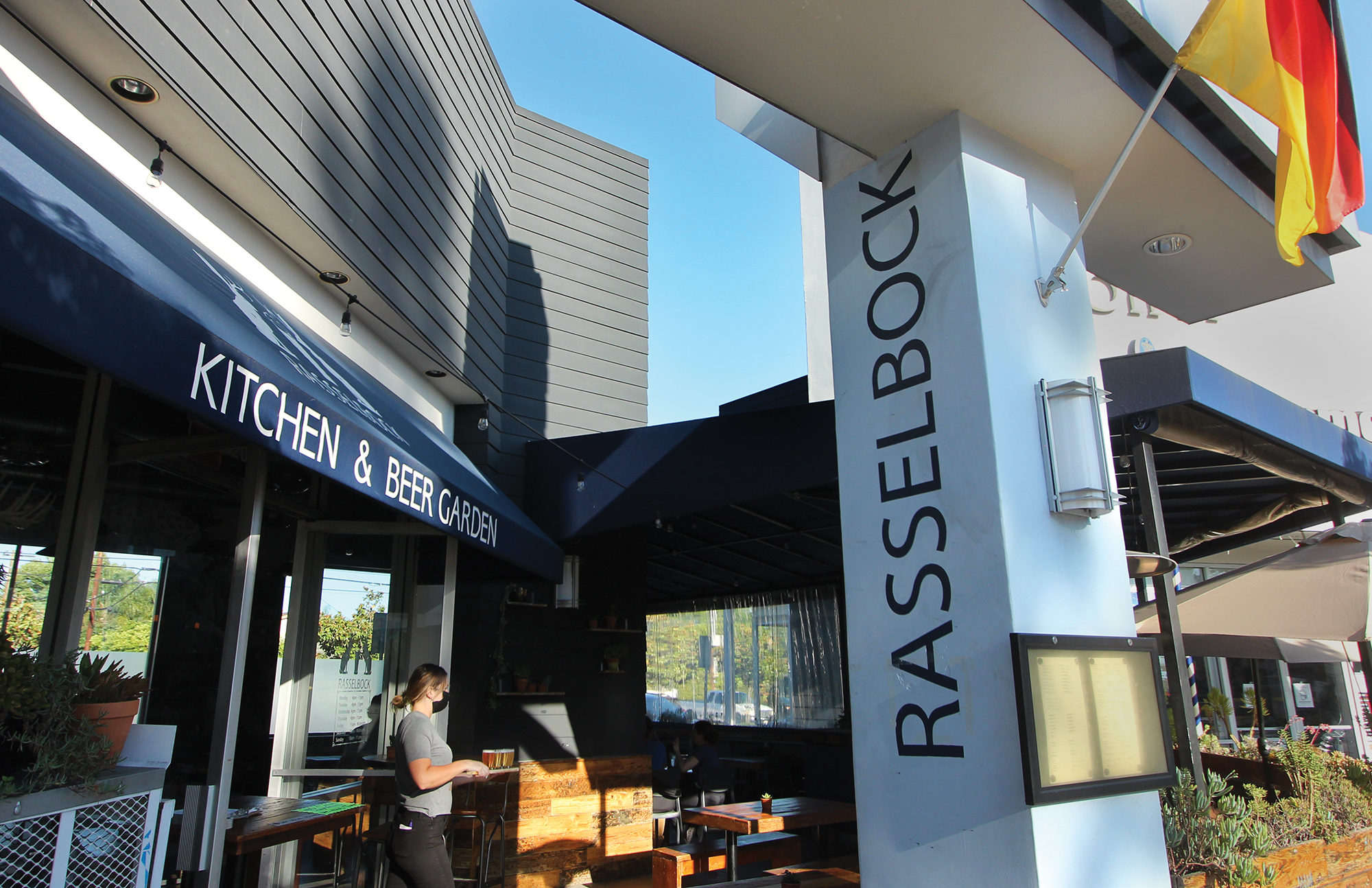 While not a brewery, Rasselbock is absolutely a staple in Bixby’s beer scene. As it says on the restaurant’s website, “Germans take our beer seriously and it plays a major role in our culture.” Owned by German-born Bjoern Risse and Bülent Yildirim, the restaurant carries 35 German and Belgian beers, served in German-style pint glasses, mugs and even boots.

Rasselbock thrives on its biergarten atmosphere: people coming together to enjoy hearty food and heartier beer. Forced to forego that atmosphere, the team made some of the most creative moves of the past year. Most notably, in late November and early December, the restaurant turned itself into a Christmas tree lot, selling hundreds of trees to the community. Rasselbock also transformed into a mini-market, selling beer, imported chocolates and other items. 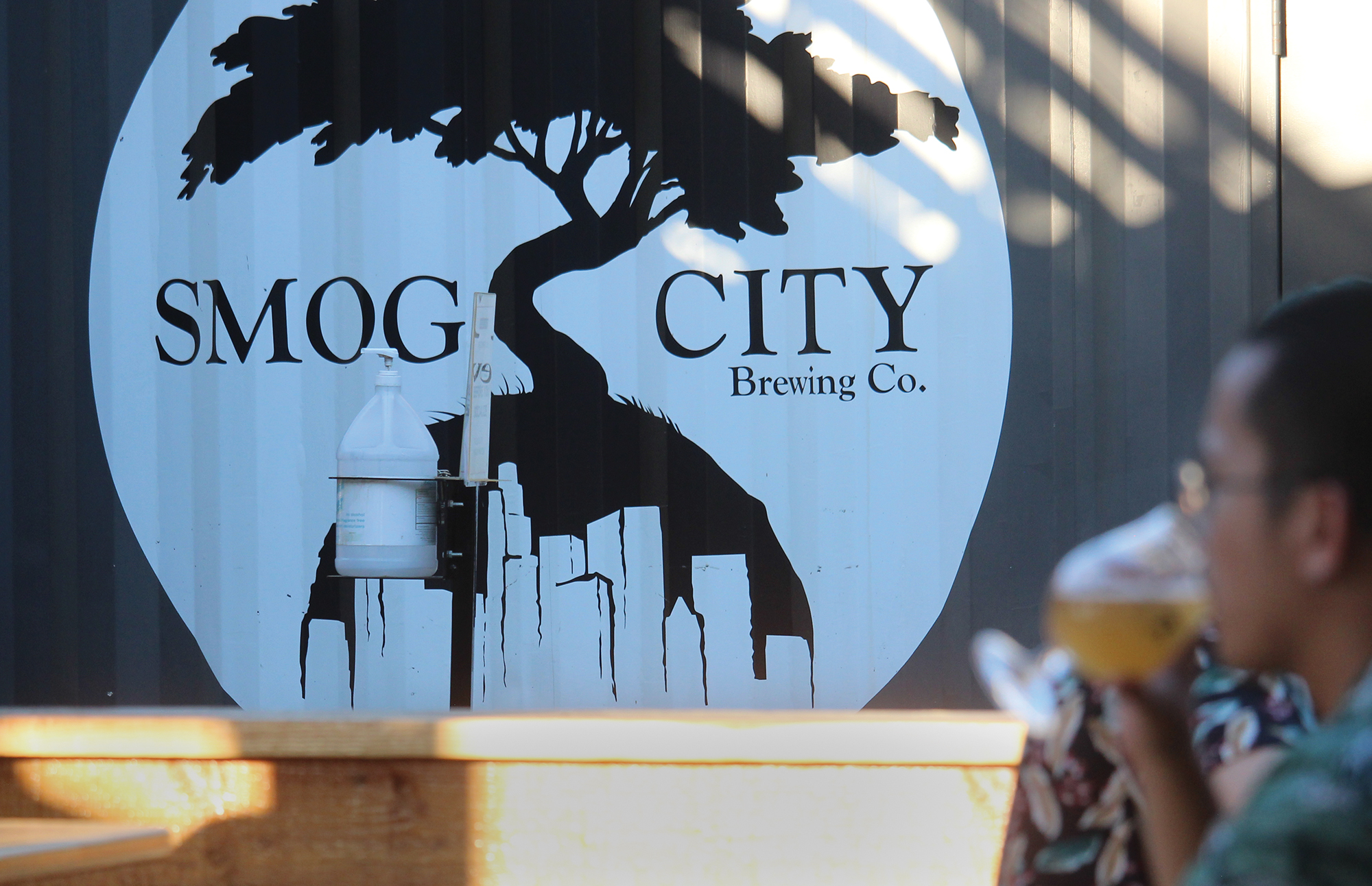 Though not based in Long Beach, Smog City Brewing Co. certainly has established itself as a Bixby Knolls beer scene contributor. The Torrance-based brewery is one of the original tenants of the original SteelCraft food hall, which opened in Bixby Knolls in early 2017. The Long Beach location offers 25 beers, including pilsners, IPAs, various ales, lagers, saisons, stouts, sours and cider.

In January 2017, the Long Beach Planning Commission approved Smog City for the sale of beer for off-site consumption, which was a plus when on-site dining came to an end during the pandemic. Similarly, being located within a food hall and surrounded by various eateries with shared outdoor seating, Smog City was uniquely positioned when state orders allowed for breweries to open outdoors if they sold food.

Founded in 2011, the Torrance brewery celebrates its 10th anniversary this year. The company has expanded to four locations, including the original brewery and taphouse, Long Beach, a second Torrance location and a space in the Glendora Public Market.