Colpo di fulmine is Italian for “the thunderbolt.”

But it’s not a reference to the environmental phenomena of lightning flashing as thunder crashes. The Italian phrase describes the moment when love strikes—so powerful and intense it cannot be denied—without warning. In other words, love at first sight.

And this is where Jay Stebbins got the name for his restaurant—Thunderbolt Pizza—which opened its doors in Bixby Knolls on Oct. 31.

“It’s a Brooklyn-style, date-night pizzeria,” Stebbins said. “The kind of place you can go for a nice salad, a pizza, and a bottle of wine on a date, or with your family, or to hang with a bunch of friends. The type of pizzeria I’ve always gravitated to.”

Originally from New York, Stebbins moved to the Bay Area for about four years. He then moved back to New York but said it just wasn’t the same. So he packed up again and moved to Southern California to join his brother Brandt, who owns and operates Stoney’s Pizza in Huntington Beach. 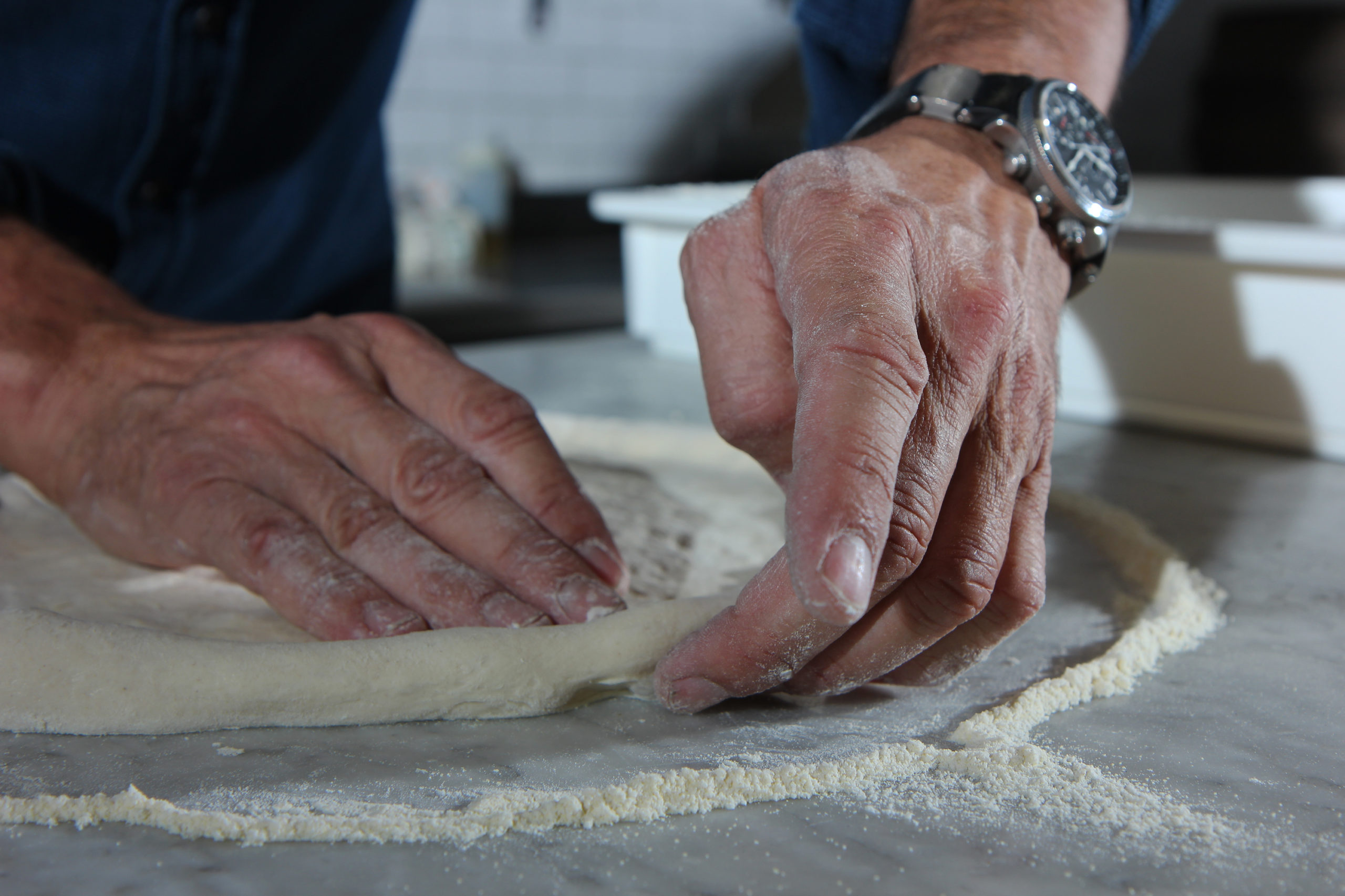 Throughout his 20s and 30s, Jay said he gained tons of restaurant experience—from serving to bartending to managing to opening. But this is the first time he has opened his own restaurant with his own money, he said.

“I always said the only restaurant I would ever do myself would be a pizzeria,” Stebbins said, adding that opening up any other type of restaurant during a pandemic would be much more difficult.

Stebbins has always loved eating pizza and over the years has developed an affinity for making it himself. He even went as far as building a wood-fired oven in the backyard of his Huntington Beach home. (But he is planning to move to Bixby Knolls as soon as possible, he added.)

As a self-taught pizzaiolo pulling from his New York roots, Stebbins’ pizzas have a thin crust made with hand-stretched dough. He said he tries to put his own twists on his pizzas, including drizzling honey on his pepperoni pies and his own combination of herbs in the sauce for his white pizza. 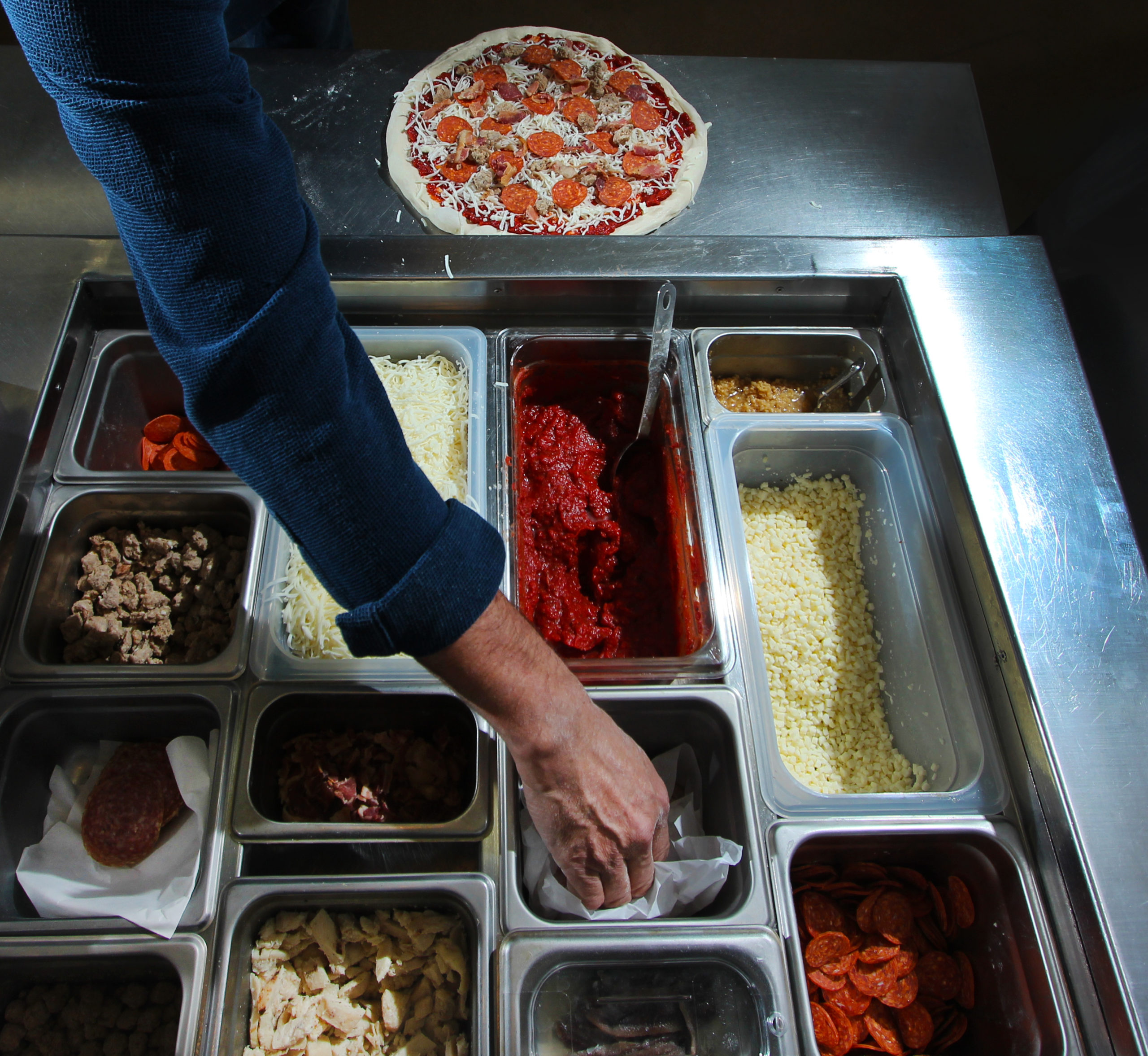 One lesson Stebbins learned from Brooklyn is the importance of collaboration within a community.

“You reach out to the other businesses that have great products,” Stebbins said. “I’m going to reach out to Cheese Addiction, Gusto Bread is doing nice stuff, there’s a smoked meat place. I’ll start looking at what they’re doing and bringing some of their products into my pizza.”

Stebbins even hinted at a potential collaboration with nearby Bixby’s Brooklyn Deli for a pastrami pizza.

But the most crucial collaboration is the partnership Stebbins already has with his neighbors: Ambitious Ales. When he first began the search for the perfect location, Stebbins said he was specifically looking at breweries.

“Pizza and beer is a fantastic combination,” he said, “you don’t really need to sell anyone on that.” 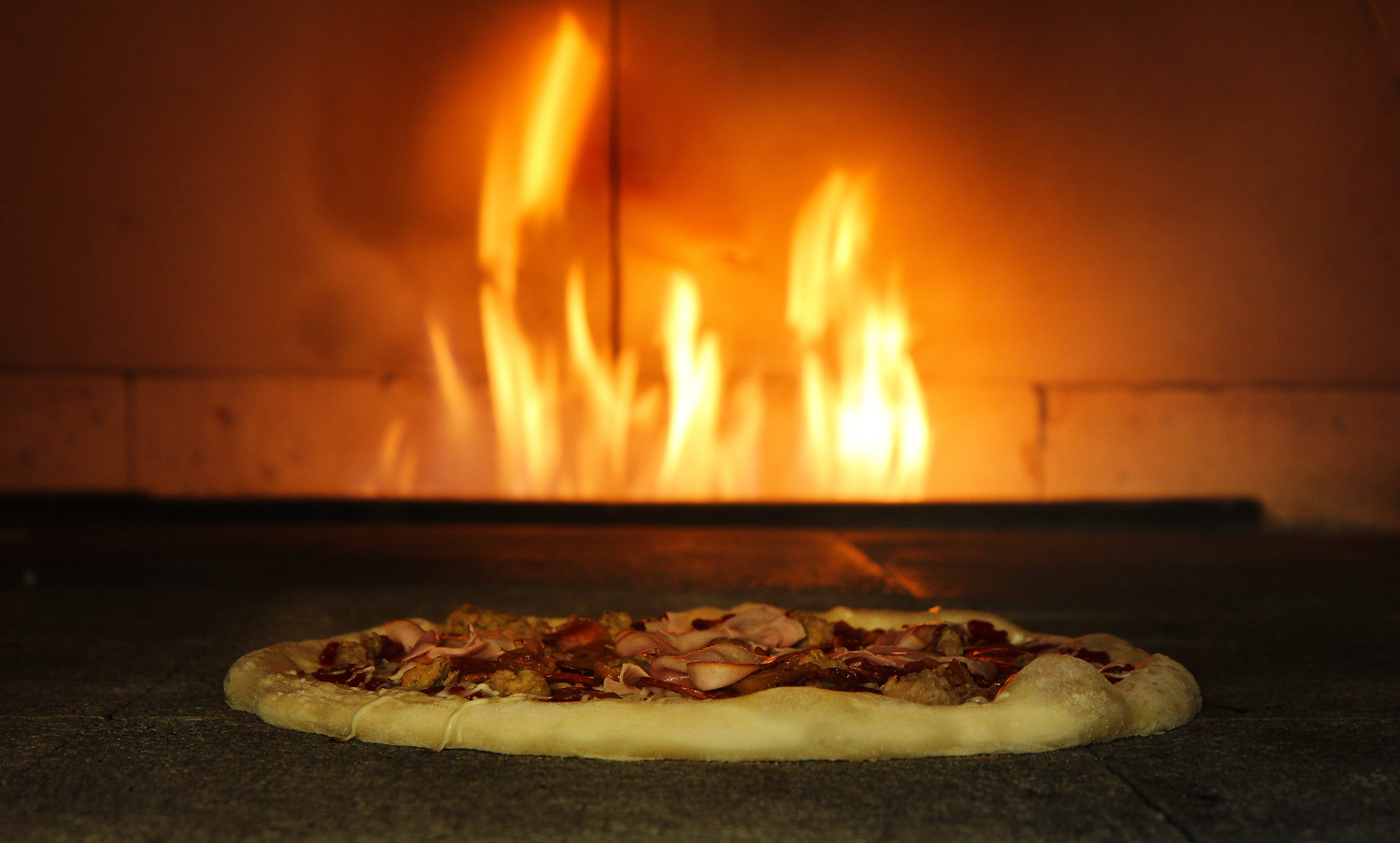 A pizza bakes in the wood-fire oven at Thunderbolt Pizza. Photo by Brandon Richardson.

In the midst of the pandemic, the partnership is particularly beneficial for the brewery because they are now open for business, serving up beers on their outdoor patio. To open with outdoor service, local and state law requires bars and breweries to team up with restaurants to incorporate food.

But the partnership has mutual benefits. Stebbins said his team will constantly be aware of Ambitious Ale’s flavor profiles and work to craft pizzas, salads and other dishes that compliment them.

Ambitious Ales has been closed since mid-March, with the four owners pivoting business to a focus on distribution, including canning their beers, a product type the brewery did not offer pre-pandemic. Prior to opening, Stebbins would fire up his oven and dish out some test pizzas and other menu items to the Ambitious team.

“The pizza is really good. He’s got some cool options and he’s using high-quality ingredients,” said Garrett Carroll, co-owner and master brewer of Ambitious Ales. “We’re definitely excited to be working with him.

“He focuses pretty heavily on the dough—he’s really big on fermentation,” Carroll added, noting that the two companies have that in common. 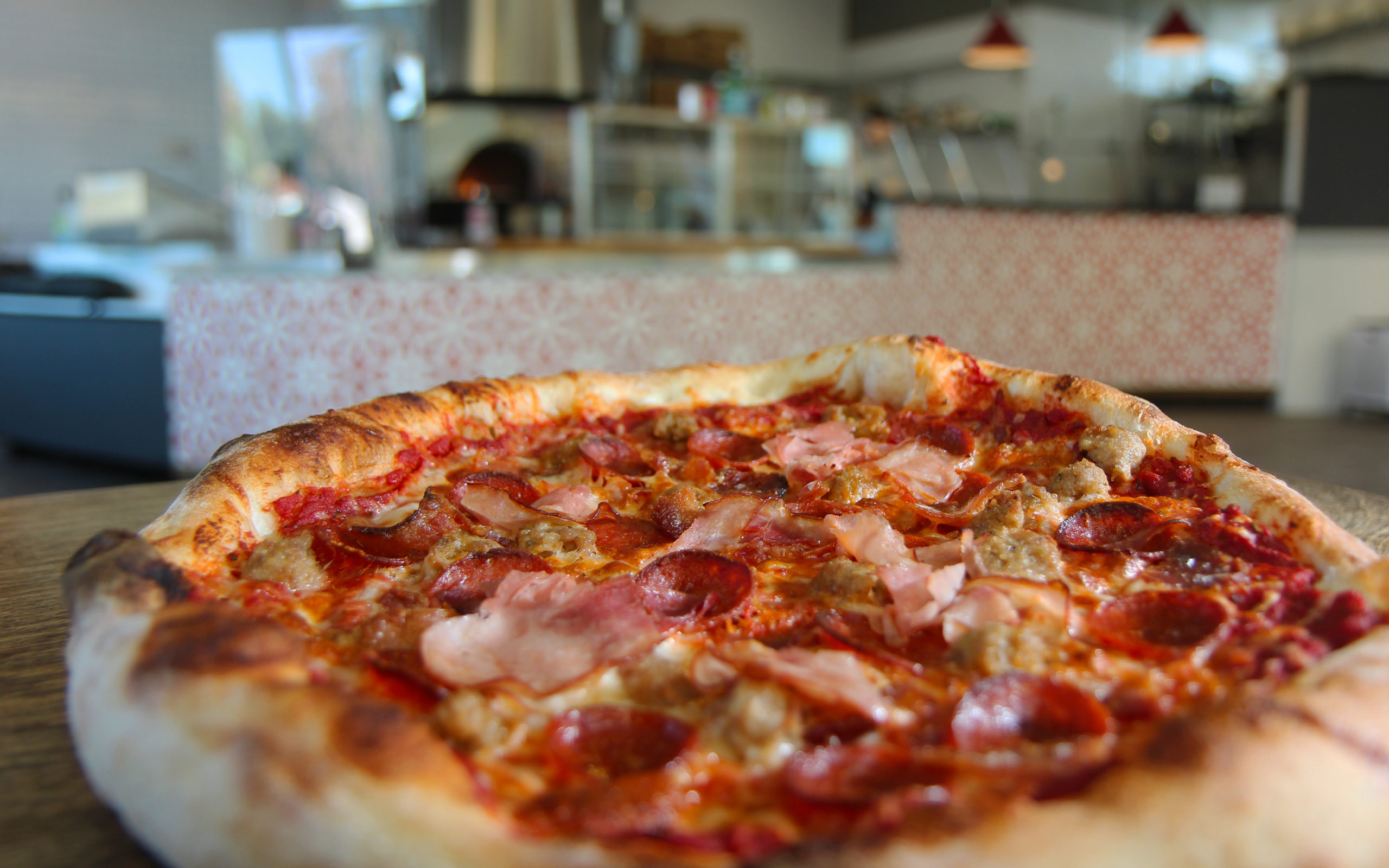 While the partnership is particularly beneficial during the pandemic for Ambitious Ales, Carroll said the brewery owners don’t foresee any lapse in the collaboration when business mandates begin to lax and ultimately lift.

Thunderbolt is the fourth pizzeria to call 4085 Atlantic Ave. home. Red Brick Pizza, Bella Pizza and, most recently, PowWow Pizza, which closed in January after about a year, previously operated out of the storefront. But Blair Cohn, executive director of the Bixby Knolls Business Improvement Association, has high hopes for the new venture.

“This is music to our ears. [Stebbins] wants to be part of the community, a fixture,” Cohn said. “He created a nice space. I’m happy he chose this neighborhood and I’m happy Ambitious Ales has the opportunity to reopen.”

“This is a fantastic community,” Stebbins said. “This is a pretty big dream come true.” 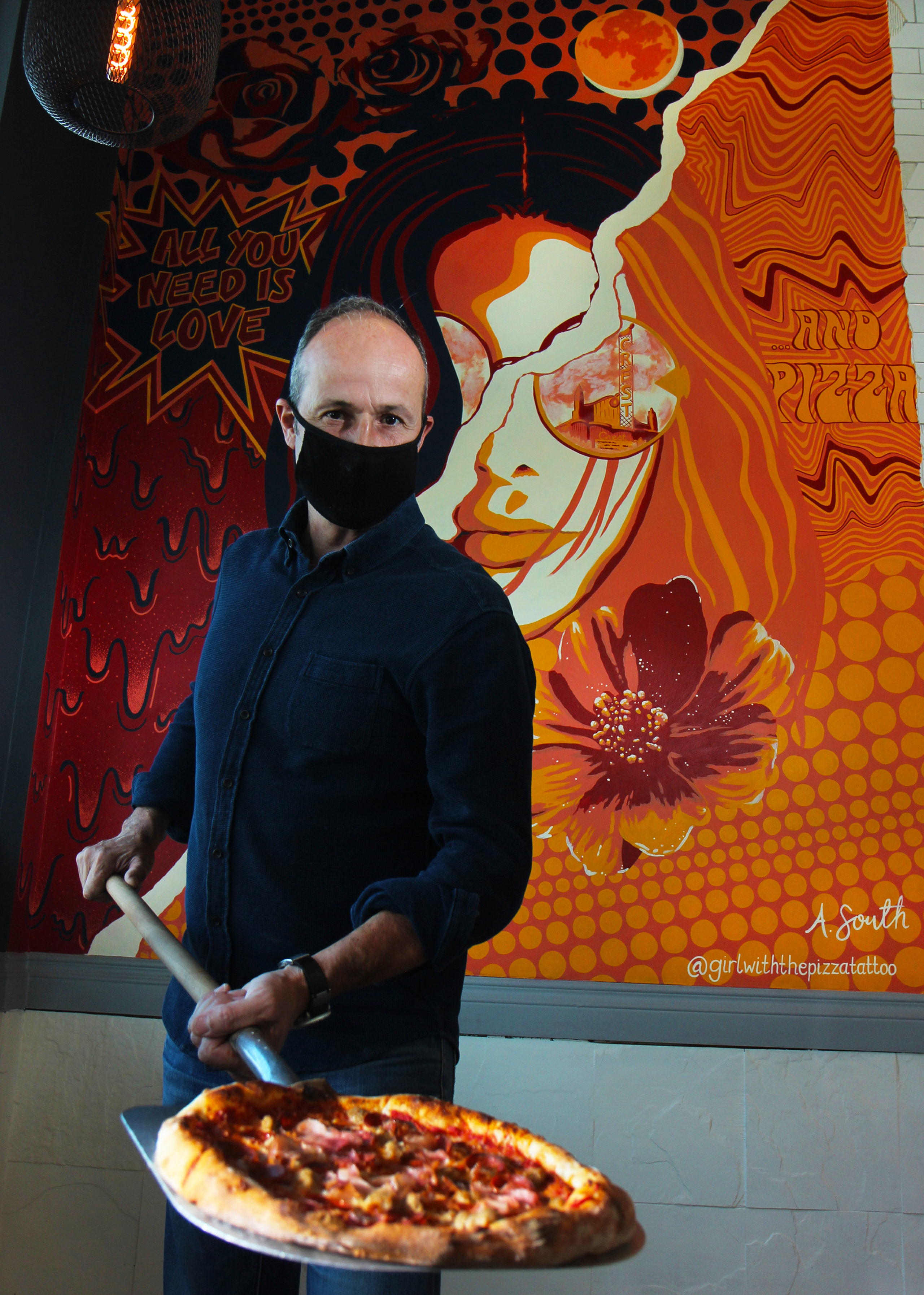