I once tried to bribe a health inspector. Not my proudest moment I’ll admit, but I was desperate.

He had just denied me the approval to open my new restaurant. I asked him if he had kids, and if “said kids” needed sponsorship for new Little League uniforms. Maybe a scholarship for a semester at college, I suggested. Or perhaps one of his kids just needs an unsightly mole removed?  All he had to do was tell me what “donation” he’d like and I could make it happen, in exchange for this one little favor.

That’s how it’s done. You never just quietly slide an envelope across a table; you offer to sponsor something.

I pulled, not a fat, but certainly an impressively chubby envelope from my pocket. I then tucked it under his computer bag that was on the table at which we were sitting, in my empty 130-seat dining room in downtown Chicago. And I waited for his next move.

It’s important to understand here that bribing a city official in Chicago isn’t exactly a thing of the movies. In actuality, it can, unfortunately, be a very real cost of business there. And like I said: I was desperate.

This was my final inspection and I was already a month behind schedule for my opening, and to say I was hemorrhaging money would be an understatement. The kitchen alone had run so far over budget that I was forced to buy coffee mugs at Ikea, and this inspector was about to push my opening back another month over the placement of a single paper towel dispenser.

I tell this story because had the concept of a “cloud” or “ghost” kitchen been available back then, I would have jumped at it.

No inspectors. No permitting. No buildout. No settling front/back staff disputes. No servers eating French fries off of plates in the service window, and no pandering to customers who want a discount because they claim to have an allergy to water.

Ladies and gentlemen of the culinary world, Long Beach gourmands, foodies, and Top Chef wannabes everywhere, may I present: The Partake Collective. 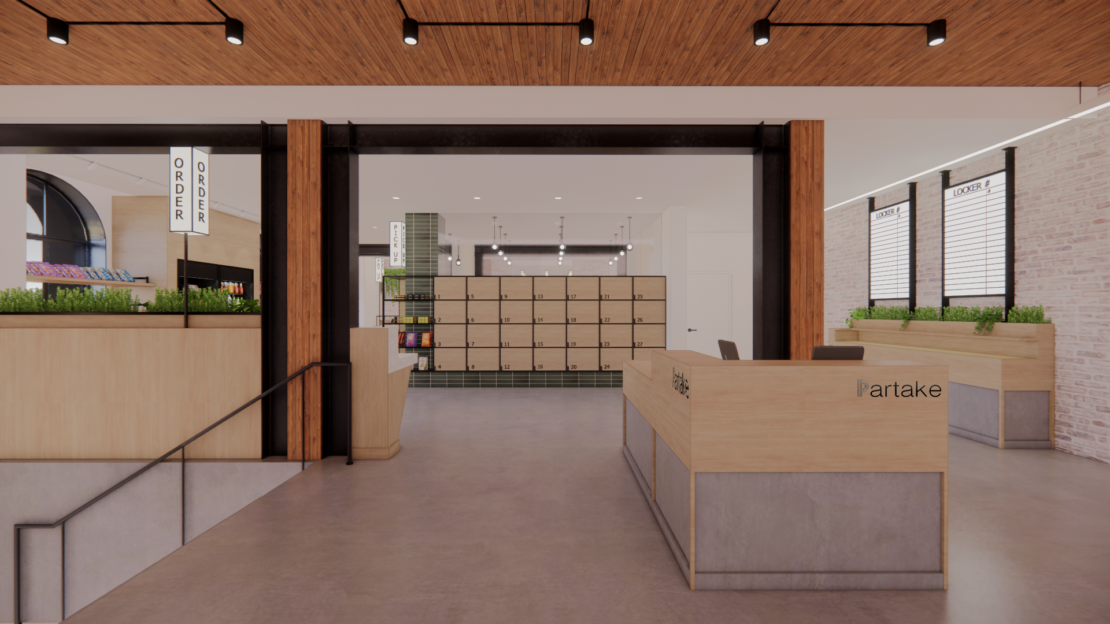 Artist’s rendering of the lobby and lockers at Partake. Rendering  courtesy of Studio One Eleven.

And if that isn’t enough, there’s an accelerator program available to the Partake culinary community offering capital, tools, and the training required for a small brand to grow (an application is required); as well as tenant support staff offering expert guidance from legal to insurance, design and branding of your products.

Located at 456 Elm Ave. in the East Village Arts District, it is housed in a building that has served many purposes including a Pacific Bell telephone call switchboard, back when landlines were a thing, and more recently a MAHLA mental health facility. Now, 456 Elm is about to become the boom-center of all things culinary in Southern California.

I was fortunate that Partake CEO Adam Carrillo was willing to show me around the 25,000-square-foot site slated to open in the spring of 2022, but is still in the rough construction phase.

Hard hats on our heads, and wrapped in neon safety vests, we walked through a banging and buzzing construction sight where Carrillo explains that the building is going to be restored to its former glory. “The primary entrance will be on Fifth Street, the secondary entrance will be on Elm,” he tells me, pointing to the two doorways leading into a sun-filled lobby embracing exposed brick and original 4×6 wooden beams.

“Right here you’ll have a beautiful jewel box where people can go in and grab their food out of the lockers,” he said as he presented a floor space busy with construction workers allowing for the if-you-build-it-they-will-come moment. And his vision is easy to see. 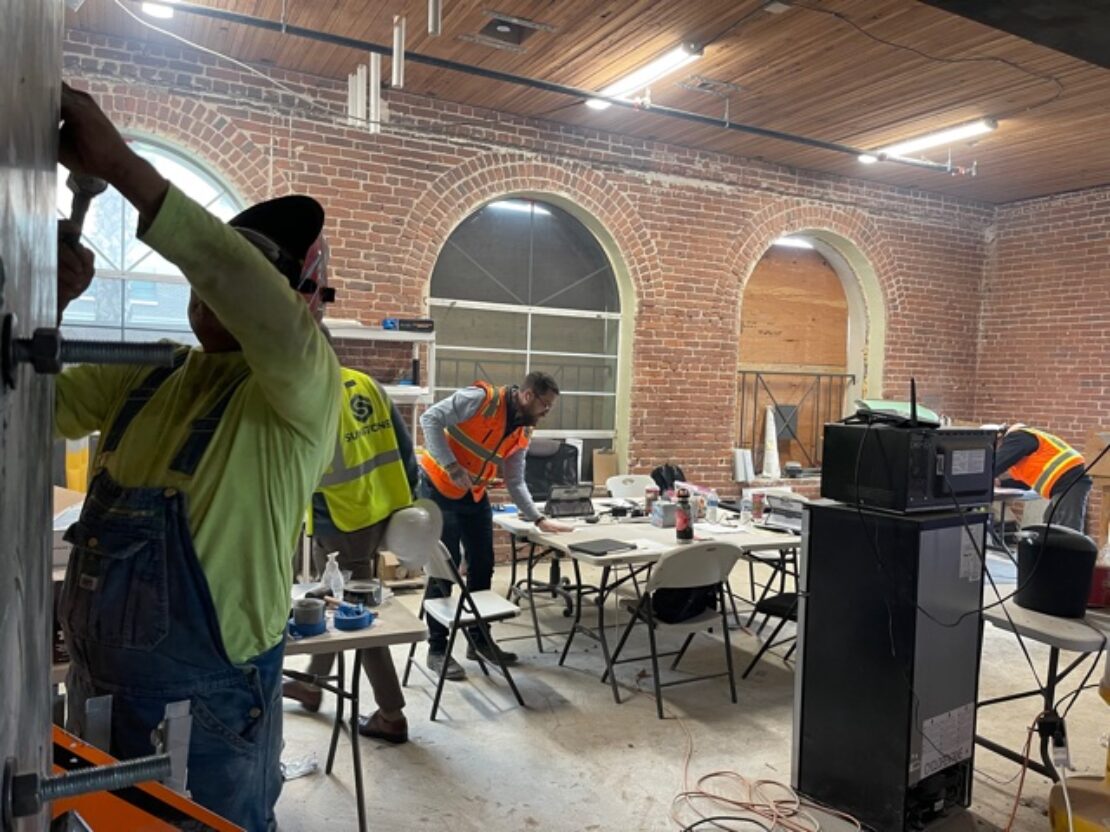 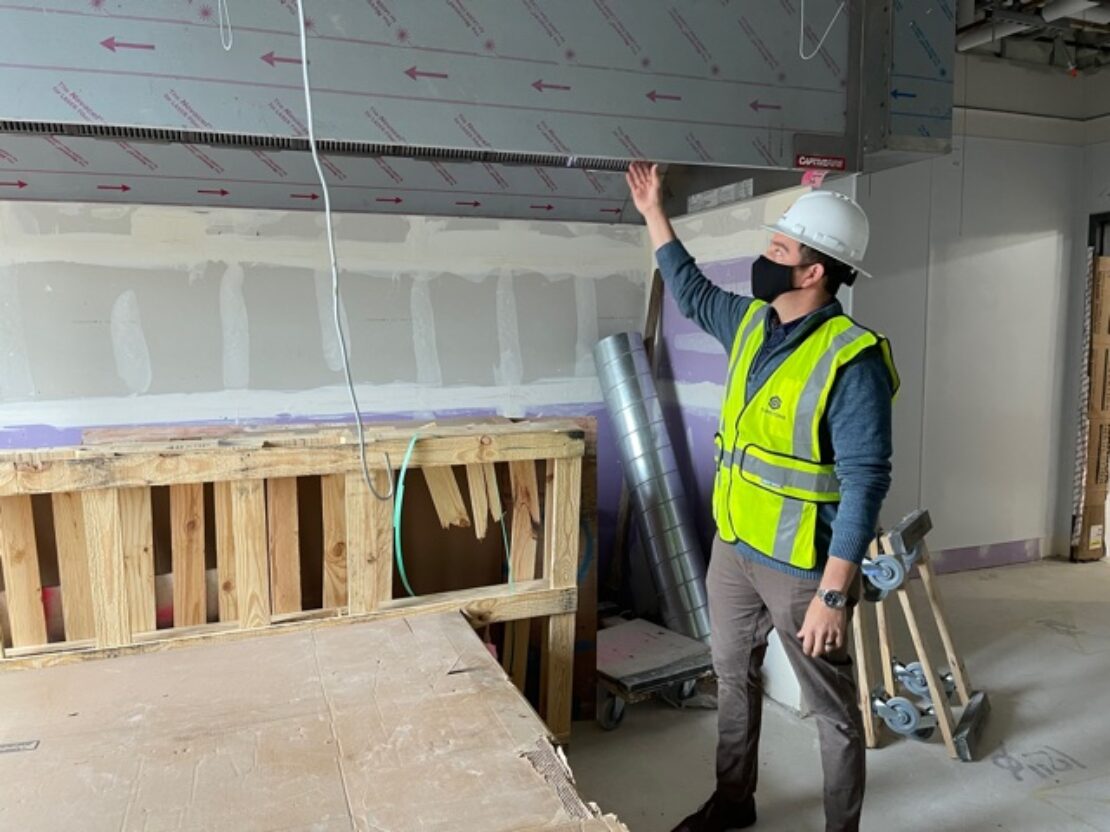 Simply order through a kiosk in the lobby, or on your mobile device, or through any number of third-party platforms. Utilize contactless pickup or delivery, or simply dine-in — yes, there’s a dining room where you and all your friends can go out to dinner and order from completely different restaurants. Imagine that: You won’t have to worry about the one friend (there’s always one) who’s paleo, keto, vegan, gluten-free, low-carb., sugar-free, or just really picky. With more than 20 different kitchen spaces spanning three floors, odds are there’s going to be something for everyone. And while you’re waiting for your food, you’ll be able to browse the retail market featuring brands and selections of products from the Partake tenants.

What Partake is, is a way around the situation I described above. It’s a way for a cottage food business (items produced at home for farmers markets) to become an actual product on grocery store shelves. Or for a pop-up to get that first step in becoming an actual restaurant. It’s the helping hand every small business needs when it’s ready to grow, but doesn’t have the cash to put in an envelope to grease a few palms when needed, because everything is already done.

It is not a dimly lit, unassuming, slightly intimidating, dark, hidden, unwelcoming building tucked into an industrial area where you fear for your safety. It isn’t a “ghost,” “shadow,” or  “dark” kitchen housing unaccountable virtual restaurants that are nothing more than anonymous websites linked to faceless delivery apps. It’s so much more.

Long Beach claims to be small business-friendly, but any extremely small business person will tell you that it’s not. While it’s easy for anyone to get a cottage permit for a couple hundred bucks to make goods at home in your own kitchen to sell at a farmers market, you’re limited by $50,000 in gross sales. If you’re successful enough to exceed that amount, then you have to move into a commercially permitted space, which means hiring a commercial architect, which means hiring a commercial construction crew, which means going through commercial plan-check, inspections, fees, and waiting, waiting, waiting for the city to allow you to open while paying commercial rent.

But if you make $50,000 a year in gross sales, that means, optimistically you’re putting $20,000 a year in your pocket, with which to pay your rent, gas for your car, food, utilities, insurance, and in the end you’re barely making enough money to survive. Your commercial buildout expense can be over $100,000 which is a lot of money for a bank to give to a person who only makes $20,000 a year baking cookies at home for a farmers market.

What Partake is offering is more than a “ghost kitchen” opportunity; Partake is filling the void between being in your kitchen at home, and having to find $100,000.

Carrillo’s background is in economic development, so he has partnered with Chef Josh Drew, founder of Greenwood Advisory, who has worked with the likes of Thomas Keller (The French Laundry), Jeff Cerciello (Farm Shop), Michael Tusk (Quince), & Marc Vetri (Verti Cucina), as well as consulted for The Tartine Group to handle the culinary details, and to be sure each cooking space is top-notch. 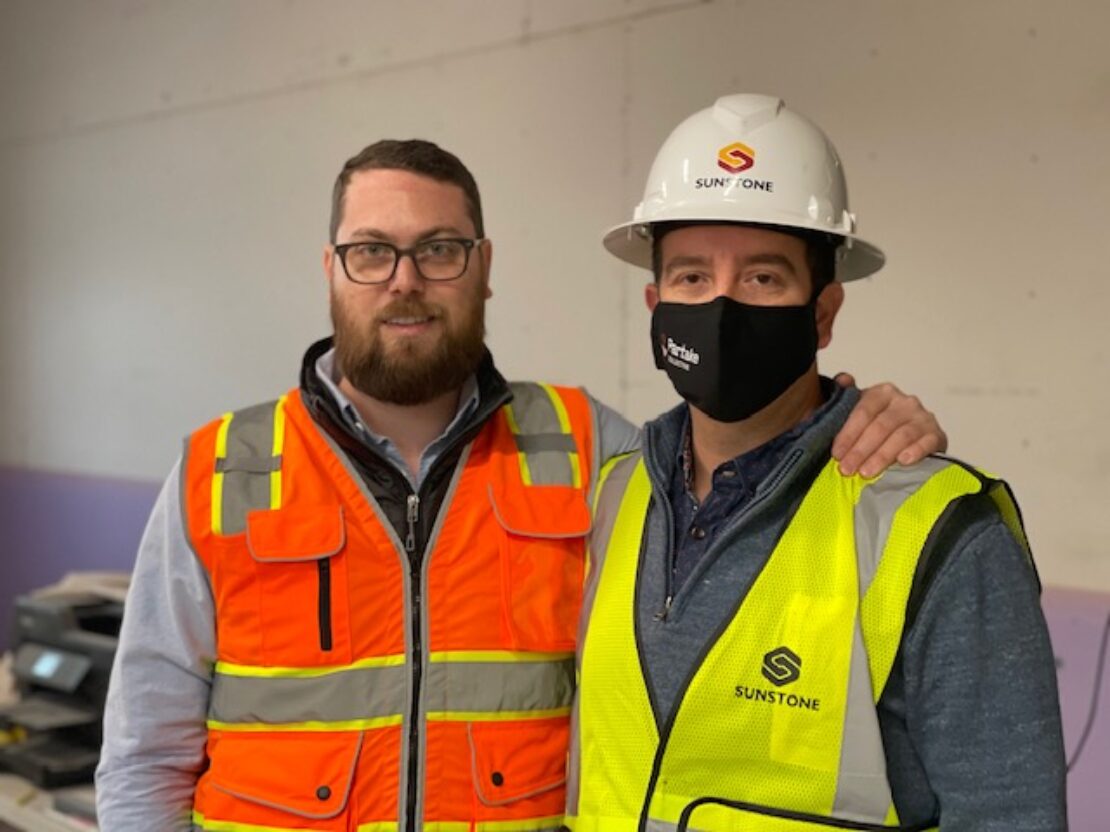 Are you a chef for hire, or a passionate cook who loves to share what you’re making on your Instagram feed? Ever thought about offering an in-person cooking class or demonstration? Or maybe you just want to play restaurant for a day with a prix fixe menu, well, say no more. There will be a 700-square-foot, state-of-the-art show kitchen in full view available for anyone who wants to rent it (starting at $800 a day, or by the week), complete with chef’s counter seating for up to six and a private dining area for that perfect “chef-driven experience.”

In addition to all that, there will be a community classroom on the lower level available where anyone with something to teach can teach a class. It’s a space for lectures, workshops or technical classes like sanitation certifications.

“I worked with Cal State Long Beach to launch the entrepreneurship education classes in Downtown,” Carrillo told me. “I think those partnerships were driven by community members that had a special need, and they were able to share their real-life experience helping budding entrepreneurs learn more about owning, operating and opening a business.”

This goes back to how Carrillo views Partake as a whole: seeing 456 Elm as more than kitchens, more than a dining experience, but first and foremost as an “eco-system for entrepreneurship” where a business owner can expand and flourish. “There are so many positive programs and opportunities [that will be] going on this building—I mean, it’s not just one discussion, it’s an ongoing expansion.” Or, one might call it a culinary collective, “that we want you to Partake in.”