Long Beach artist Dave Van Patten—perhaps most well-known for bringing bold and surrealist illustrations to walls of coffee shops, breweries and music venues across the city—is hoping to carve himself a niche in the cryptocurrency digital art frontier with an NFT collection of his own.

For the uninitiated, NFTs—or non-fungible tokens—are unique digital images based on blockchain technology that transformed how creators can own, sell and collect royalties on their creations in the digital world—but more on that later.

Van Patten’s collection, “Cloud Machine,” is a first for the artist and one of his most ambitious projects yet with over 200 unique hand-drawn characters, digitally colored and illustrated on a variety of detailed backgrounds.

Just when or how many of the digital collectibles will be released is under wraps, but Van Patten says to expect by summer a “large collection,” which, by NFT release standards, qualifies anywhere from about five to 10,000 digital images. Like many other collections, “Cloud Machine” NFTs are designed to be PFP, or profile picture art, that will mix and match characters and backgrounds, but each image will be unique.

Fans of Van Patten’s colorful and surrealist style will be pleased his NFT art features many of the same strange and sinewy creatures and characters found in his real-life work. In the physical world, they’ve already graced walls all over Los Angeles County and can be found in children’s books and zines, on hard cider bottles, band posters and CD album covers—including the Grateful Dead (live concert series), WAR, Les Claypool of Primus and many more. 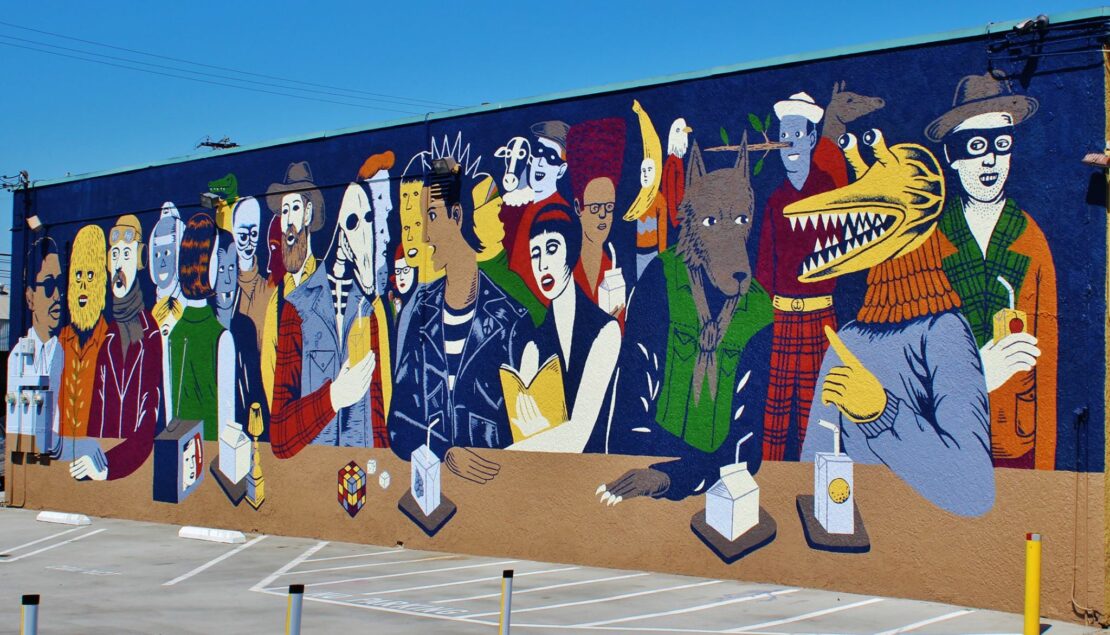 “I’m excited because I’m creating a little universe of different characters and different settings, all of it a little bit surreal or referencing my influences, like retro and sci-fi art, pop culture, nostalgic films and humor,” he said.

The collection, Van Patten said, also represents a more refined side of his work.

where the buffalo roam pic.twitter.com/2C7SoF8lEQ

Van Patten began working on “Cloud Machine” in January. Despite his own interest in the NFT scene early on, he admits he felt a little intimidated embarking on his own project. But as he watched other artists with connections to Long Beach, such as Joshua Wong, founder of the global mural art initiative POW! WOW! (now Worldwide Walls) and Tristian Eaton, who last year held a solo gallery at the Long Beach Museum of Art, both release their own NFT collections, and with much success, he thought it time to make his own mark. As it turns out, it’s been the most fun he’s had in a long time.

“I’ve had a lot of late nights and a lot of early mornings. But it doesn’t feel like work,” he said. “For the first time, I’m creating this whole universe of characters and I can just do whatever the hell I want and it’s really fulfilling and fun. It’s kind of a breath of fresh air.” 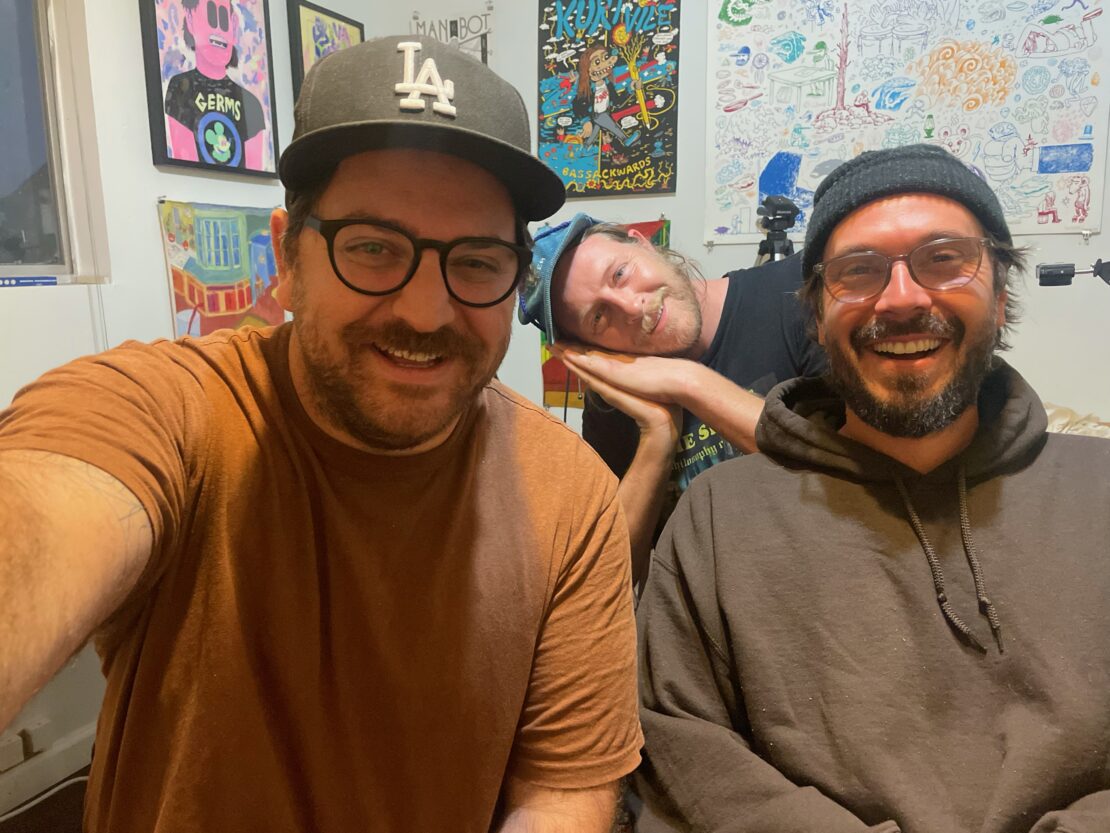 “I’ve been living in Long Beach for about 15 years and one of the first things (in the local art scene) I was exposed to in moving to Long Beach was Dave’s work,” Indich said. “I always thought about Dave’s work and how his work is so perfect for that (the NFT) scene. Specifically his talent and the characters he creates. … I mean there’s a lot of cool art, but I think he could add a lot to the table.”

For readers who’ve made it this far and are still scratching their heads at what those three little letters mean, all you need to know is that NFTs are sophisticated pieces of computer code (known as the blockchain) that designate ownership of something—anything—in the digital space. They could be art, music, videos, even a tweet, and are purchased with cryptocurrency, like Bitcoin. In the case of NFTs it’s usually a cryptocurrency known as Ethereum.

This is important for artists—and is becoming a popular means of income for them—because, for the first time, creators have a way of retaining ownership of their digital art online. This is possible because all NFT tokens and transactions are logged on a public ledger allowing artists perpetual royalties, something that used to be impossible with digital art because anyone can download an image on their computer once it’s been uploaded to the web. That’s not to say people can’t download the NFT art and save it on their computers, but only one person will have the genuine original to buy, sell and own. (If you’re still confused, check out this more comprehensive NFT explainer, here).

More and more artists are flocking to the NFT scene, hoping for a profitable piece of the virtual pie. But as Van Patten embarks on his own digital collection, he’s choosing to honor his roots as a real-world creator. For instance, the name “Cloud Machine” is a callback to past exhibitions in Long Beach.

To accomplish that in an NFT, all the characters and backgrounds will be hand-drawn and arranged by human touch, although the images will be digitally colored.

“We’re still holding on to some of the love for DIY prints, but reintroducing that aesthetic into the digital world,” he said. “I think the point is to encourage other artists to do the same.”

Since launching the “Cloud Machine” Twitter page in April, the account clocks over 4,000 followers. Almost daily, Van Patten posts sample images of what his NFT collection might look like. Judging by the flurry of likes, comments and retweets on the art, it’s generating significant buzz, at least on Twitter, which has become one of the most popular hubs for NFT collectors outside of Discord, an instant messenger social media platform.

“I never really thought I would be able to connect so quickly, but a lot of people have shown a lot of love. I just feel so grateful,” Van Patten said.

Whether NFTs appeal to you, there’s a tremendous amount of attention and money flowing into the crypto arena that fuels them. In 2021, NFTs became a $40 billion market. That influx of money has also created a gold rush of sorts, with NFTs becoming another part of the volatile crypto market where many traders see a chance to get rich with well-timed buys.

All this attention is very exciting for artists who have struggled to reach new audiences in the real world, said Williams, “Cloud Machine’s” brand coordinator.

“I’ve done art shows and have been involved in art my whole life, … and NFTs are really interesting because you can put a person in a position where they get exposed to people all around the world very quickly and that’s amazing,” Williams said. “I don’t know of any other projects that really existed before this whole world of NFTs.”

But the NFT community is also creating a real-world presence around the globe. From NFT conventions, secret shows, artist meet-and-greets, and more, NFT creators and buyers are tapping into the power of physical world connection to sustain the scene.

Van Patten sees the “Cloud Machine” community as being “rooted first and foremost in a love for art. And we’re excited to have people who are interested in the trading aspect of it,” he said. “But for the most part, we’re just excited to make images that people have something to wake up to and they’re just happy about.”

Van Patten said his NFTs will be bought with Ethereum but said he and his team are still in the process of deciding what the price point for “Cloud Machine” will be.

For those looking to keep up with the “Cloud Machine” release, Van Patten encourages people to follow their Twitter page and sign up for their whitelist with Cameo Pass, the company that they’ve teamed up with to launch their collection. Those who pay the fee to sign up with Cameo Pass will have early and guaranteed access to the collection when it’s released, or “minted” as they say in the crypto community.