When Sacbe Meling broke the news to his family 20 years ago that he was swearing off animal products forever, his decision was met with both shock and confusion. Regarding cuisine, meat and dairy are fundamental to his Mexican heritage. If not consumed outright at every meal, Meling will tell you, it’s in nearly everything else.

“They thought I was crazy,” the 41-year-old chef said. “How would I get my protein?”

Now, the Downey native said, they’re vegan converts. Though his 15-year-old son, Volker, has been a vegan since birth, his mother, a vegan for six years, his father, step-father even a few from his extended family all subscribe to the plant-based diet. It was no easy feat, he said, but once he could prove to them that he could recreate his family’s recipes to be just as, if not more, delicious and nutritious as its original design, they couldn’t justify not making the switch.

But it’s not just Meling’s family that reap the rewards of his creativity and ingenuity. Since 2016, the chef has been blowing the minds of vegan and non-vegans alike with his 100% plant-based menu at his Mexican restaurant, Pancho’s Vegan Tacos. Now, the popular Nevada-based eatery, which counts three locations in the state, can add Long Beach to its vegan family.

Taking over the space where Pizzanista! on Seventh Street used to be, Pancho’s Vegan Tacos is set for a small soft-opening Tuesday, April 6, with its grander debut Friday, April 9. 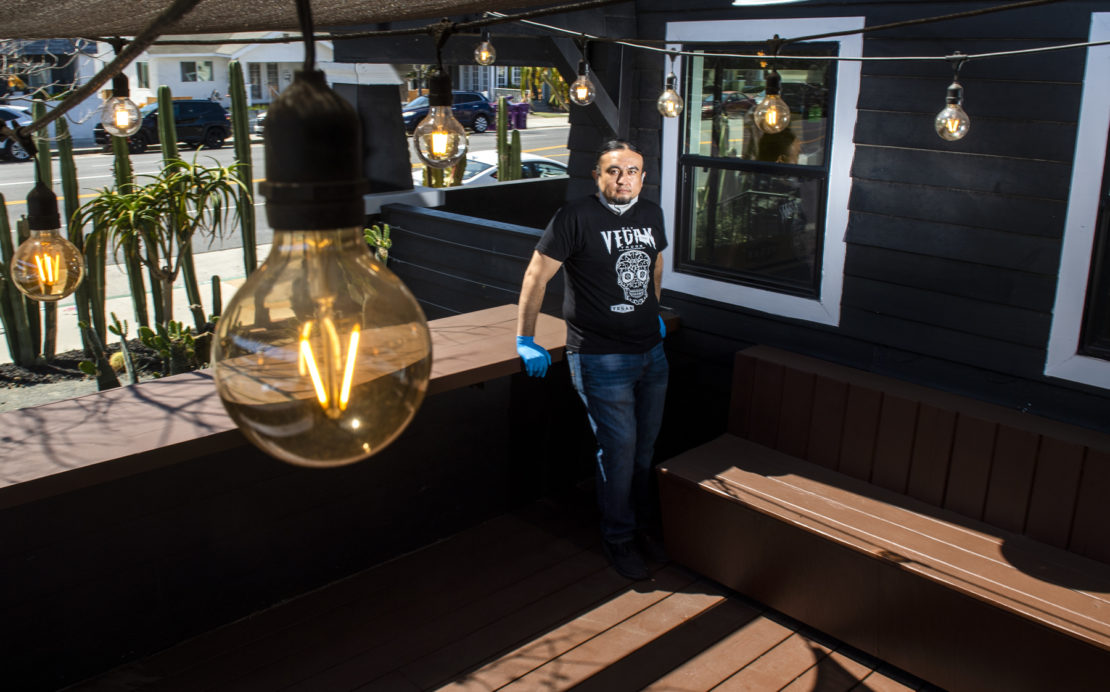 A side dining patio lined with lights with Sacbe Meling, owner, at the new restaurant Pancho’s Vegan Tacos, which is preparing to open soon in Long Beach Friday, April 2, 2021. Photo by Thomas R. Cordova.

As with their other locations, Long Beach patrons can expect the same fresh ingredients, authentic family-bred recipes and plant-based proteins, made in-house, to which Meling uses a number of alternatives. Asada, al pastor and chorizo are wheat-based. The chicken, or “chik-end” is made from soy and the carnitas from tender jackfruit. Meling also uses mushrooms and cactus for their high protein content.

While their name suggests tacos may be the dominant dish, Pancho’s menu celebrates a pretty wide swath of Mexican staples; burritos, tortas, enchiladas, quesadillas, sopes, tostadas, huaraches, albondigas, pozole and nachos. And that’s not even including the desserts and aqua frescas (yes, vegan horchata!).

But, for the odd one out, there’s a selection of American mainstays including a medley of burgers and hotdogs made from Beyond or Impossible plant-based meat. Meling said he chose to outsource those meats because the two brands have done a fantastic job in recreating the flavor and texture of the bonafide thing. Everything else, though, he’s got taken care of.

For every day of the week Pancho’s advertises specials. Meatless Mondays mean 10% off the entire menu. Tuesdays are, of course, Taco Tuesday and offer either three tacos and a drink or just four tacos for $6.50. On Wednesday, nachos are $7.25. Tostadas on Thursday’s are $2.99. On Friday, burritos are $6.99. Sopes on Saturdays are $2.99. And on Sunday, chilaquiles are $6.25.

Meling said he’s excited to start this new chapter of Pancho’s in Long Beach, knowing that the city has a prominent vegan community. While the chef will commute from his home of 15 years in Las Vegas to Long Beach, for the next few weeks, you can spot the plant-based chef at his new restaurant in the Hellman neighborhood north of Alamitos Beach.