When you build a bridge, the kind ships go under and cars go over, you’d think it’d be something that always kind of stuck with you. But Bob Schraeder, project manager for Shimmick Construction on the Gerald Desmond Bridge replacement, said it was through experiencing the work of the four artists that chronicled the bridge’s creation that “caused me to remember the challenges we had in construction and the beauty of what we were building. The art captures that, it actually makes you reflect more on the accomplishment.”

The Long Beach-based artists, Sarah Arnold, Kathryn Babcock, Helen Werner Cox and Liz Talbot, were given exceptional access to the bridge project for three years, observing and painting from on top and below it.

“There was a rhythm in the work on how the bridge progressed, the daily coming and going of the men and women who were building it,” Babcock said. “So every day we came to it, we were trying to capture something new and specific about what it was that they were doing at the time.” 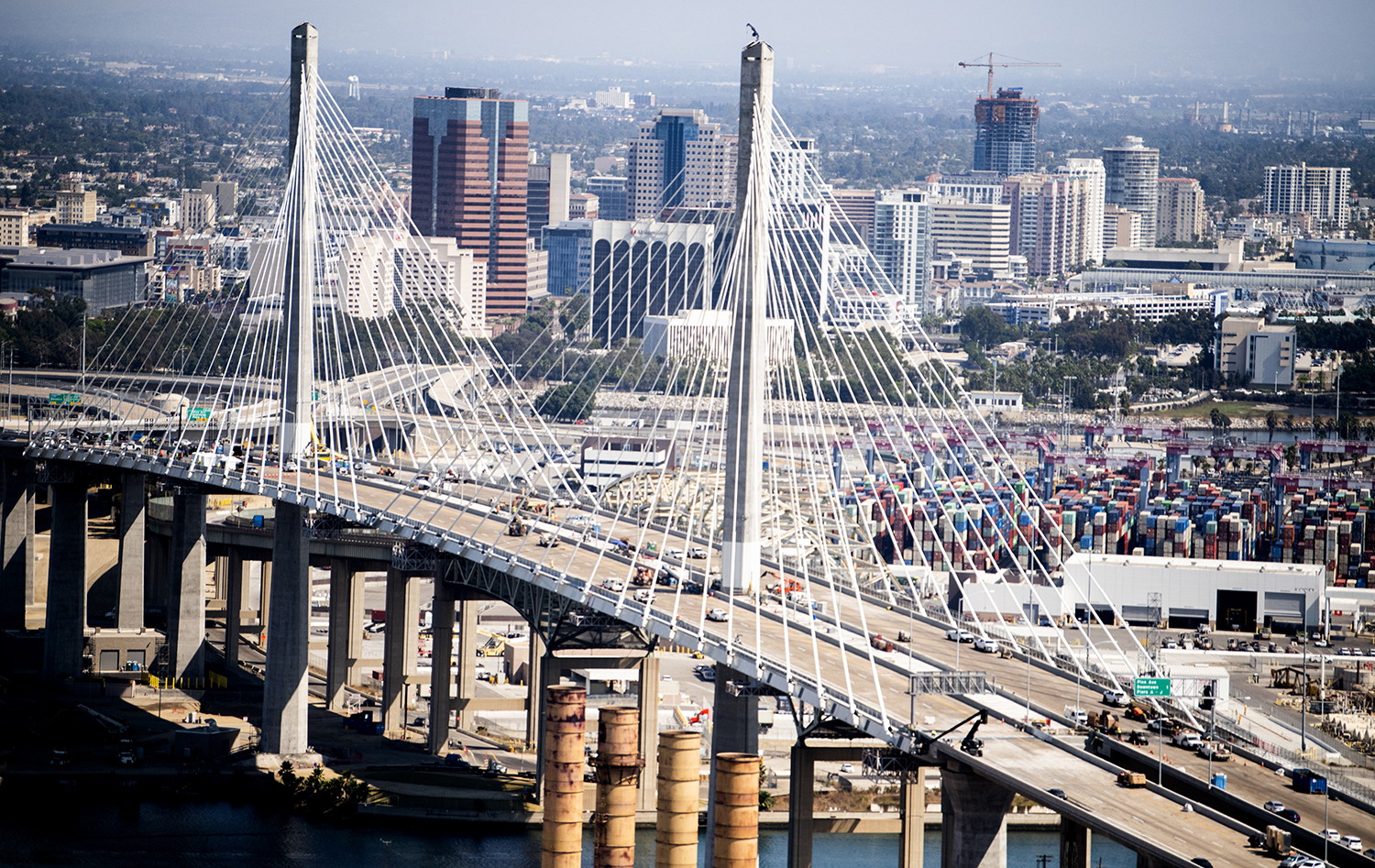 The artwork they produced makes up Under Construction, on display at the Rod Briggs/Long Beach Creative Group Gallery (2221 E. Broadway) from April 3 to May 1. Schraeder has already seen the art they produced and says he’s amazed how they were able to show through a two-dimensional art form, “the motion of construction because there’s so much going on. It’s very satisfying, it’s visceral, it causes and evokes an emotional response, to see it. And that’s what art does, it kind of connects at a deeper human level.”

The thing of it is, connecting on a deeper human level is what was happening on the bridge for three years as genuine respect and admiration grew between the artists and those building the bridge. In fact, as much as they enjoyed the creative journey, the artists all echoed Kathryn Babcock’s sentiments that she would “miss the people more than anything else. There was a crew up there of really dedicated artisans.”

Helen Cox said bridge personnel treated the artists “so well. The construction supervisor took us under his wing and he would come pick us up and drive us to the top of the bridge. And when we were done painting, he would drive us back down again. So we were just, we always felt really grateful to be there.”

Mutual respect goes a long way and it seems like those building the bridge were just as admiring of the work the painters were doing. Sharing an amazing space so high up apparently has a way of bonding people to each other.

“I told Helen that I was somewhat envious of her connecting with the workers on the bridge,” Schraeder said. “I told her because ‘you got to connect on a deeper human level, as they saw their work validated and saw it as art also.'”

Under Construction, which also features the photography of Nick Santa Ana and Paul Trinidad, will be available for viewing Saturdays and Sundays from 1 to 4 p.m., with no appointment required. Guests can make reservations outside of standard viewing hours by clicking here, or calling 562-400-5166. There’s also a virtual gallery available.

The paintings, which kind of have an Impressionism meets WPA kind of vibe, are remarkable, as was the experience of creating them. The fact that the focus of that creation remains very much a feature of the skyline makes it something that will stay with those who built it and those who chronicled it being built.

“We never lose our sense of wonder if we keep looking,” Babcock said. “Watching that bridge come together was wonderful. I mean, it was truly amazing how everyone pulled together to make it work. Every person that worked there that we met was just so proud to be part of this project. I mean, they know it’s the project of a lifetime, too. They said to us, we’re gonna drive our children over this and say ‘Daddy was part of this, Daddy built that.'”

And the artists painted them doing it. They speak below about a bit of their process. 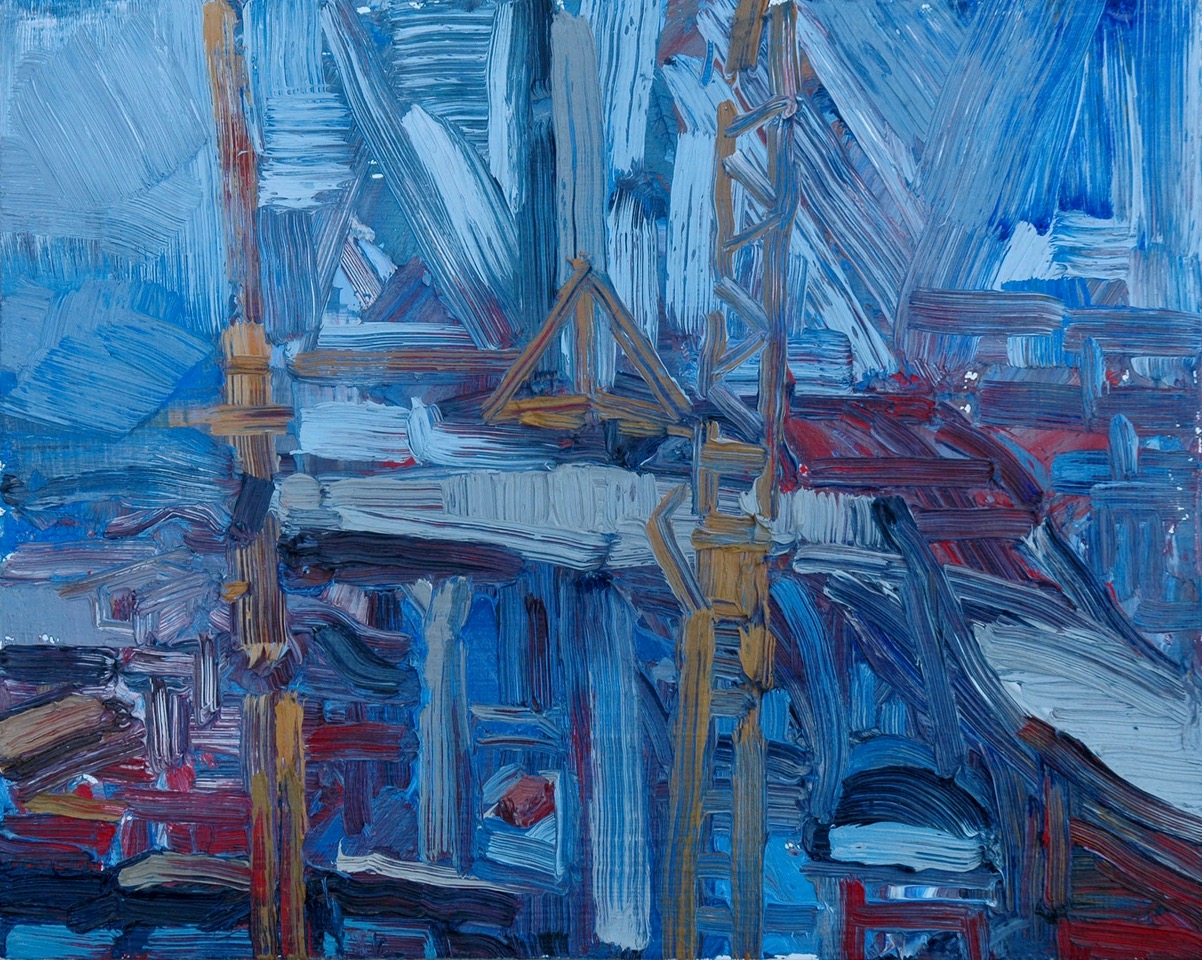 “It was a challenge because it wasn’t my usual subject matter, I usually paint buildings in neighborhoods, and I had to simplify my palette and color schemes. It was a challenge that the view was so massive and complex and had to be simplified and edited. It was rewarding trying to simplify the view and condense the space and light and the structures into a small painting that I was not able to return and work on more. I was mostly working when the other painters were on the bridge so I was unable to join them as much as I would have liked. It was also fun to see how the workers on the bridge took so much pride in their work and really liked to see people painting it.”

“What I set out to capture was the end days of the Gerald Desmond Bridge, the original Gerald Desmond Bridge. And so my paintings include the original Gerald Desmond Bridge and the increasing size of the replacement bridge. I wanted to somehow preserve in memory, the legacy of the old bridge but as I was painting I started to fall in love with the new bridge. Watching its progress and seeing how the engineering unfolded, I think it became almost urgent to document the different phases of the bridge as it was being built because those were fleeting. Those views, the views that we painted will never be seen again. We were trying to capture that peculiar or specific moment that was part of the history of this creative process. I mean, building the bridge is a creative process. And then the skilled men and women that constructed the bridge, all artisans, so you kind of are watching artists at work.” 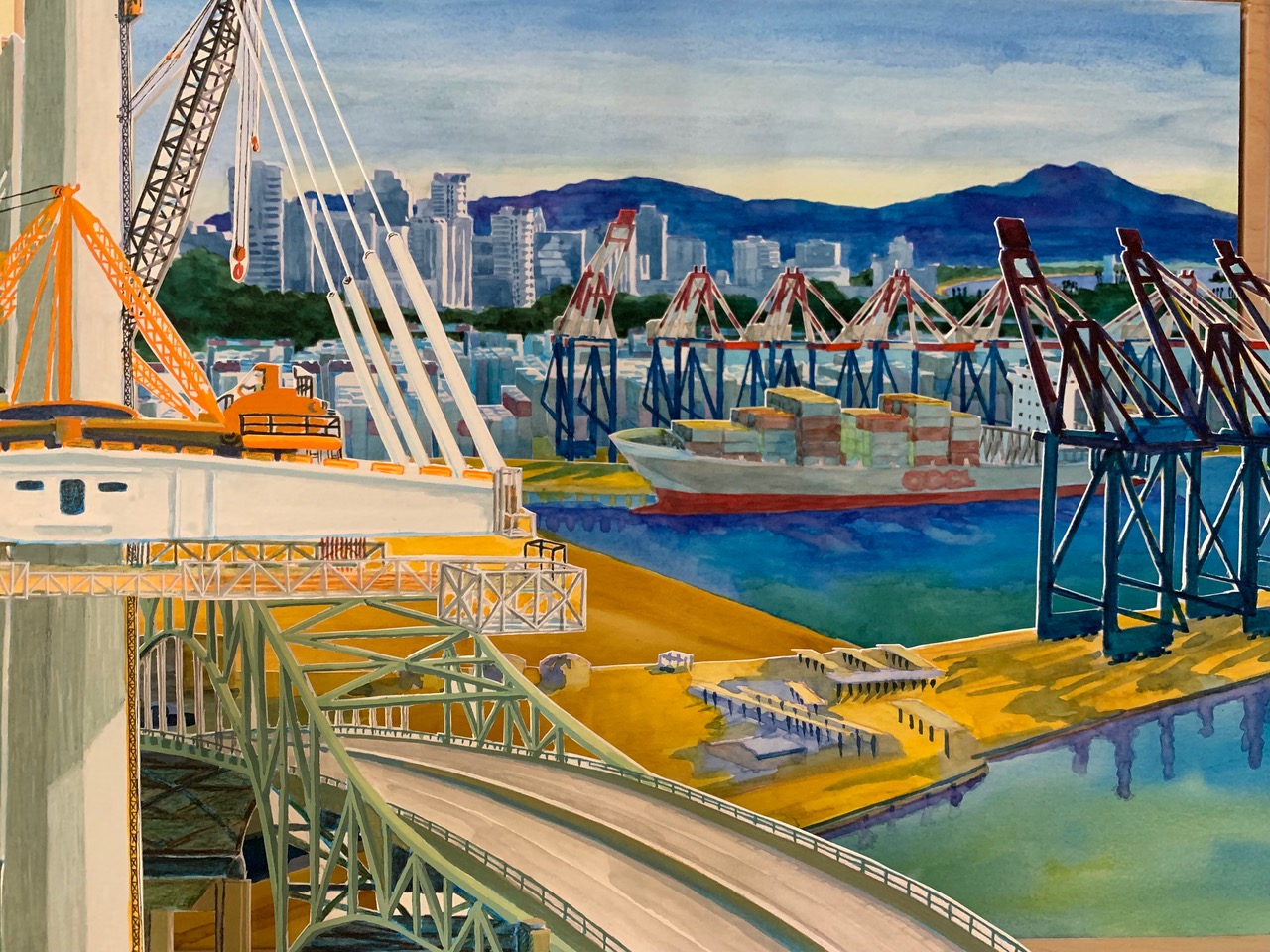 “I saw myself as documenting the process of the bridge and trying to capture that feeling. I concentrated a lot on how things were built. And so when I drew a pillar with the stairs, I spent some time figuring out how those stairs were built. And I actually drew them the way they’re built. And then when you’re underneath the bridge, you really feel the power of the bridge itself. You know, its height, its weight, its beauty. It’s a beautifully designed bridge, even just the pylons and the pillars that are holding up the bridge are glorious. They reminded me of old Breugal paintings, the Tower of Babel. And when they were building them, they had these intricate metal stairsteps that went all the way up the pillars and so that the guys could walk up and get where they needed to go. And I found all that kind of stuff fascinating. But all of us had to edit and interpret. We had to isolate things, we had to organize things. You start by looking for the big shapes, and values, and then you find the rhythms and push the space. So it was exhilarating. And it was exhausting. It was great fun. And it was hard work. We really, we really pushed ourselves.” 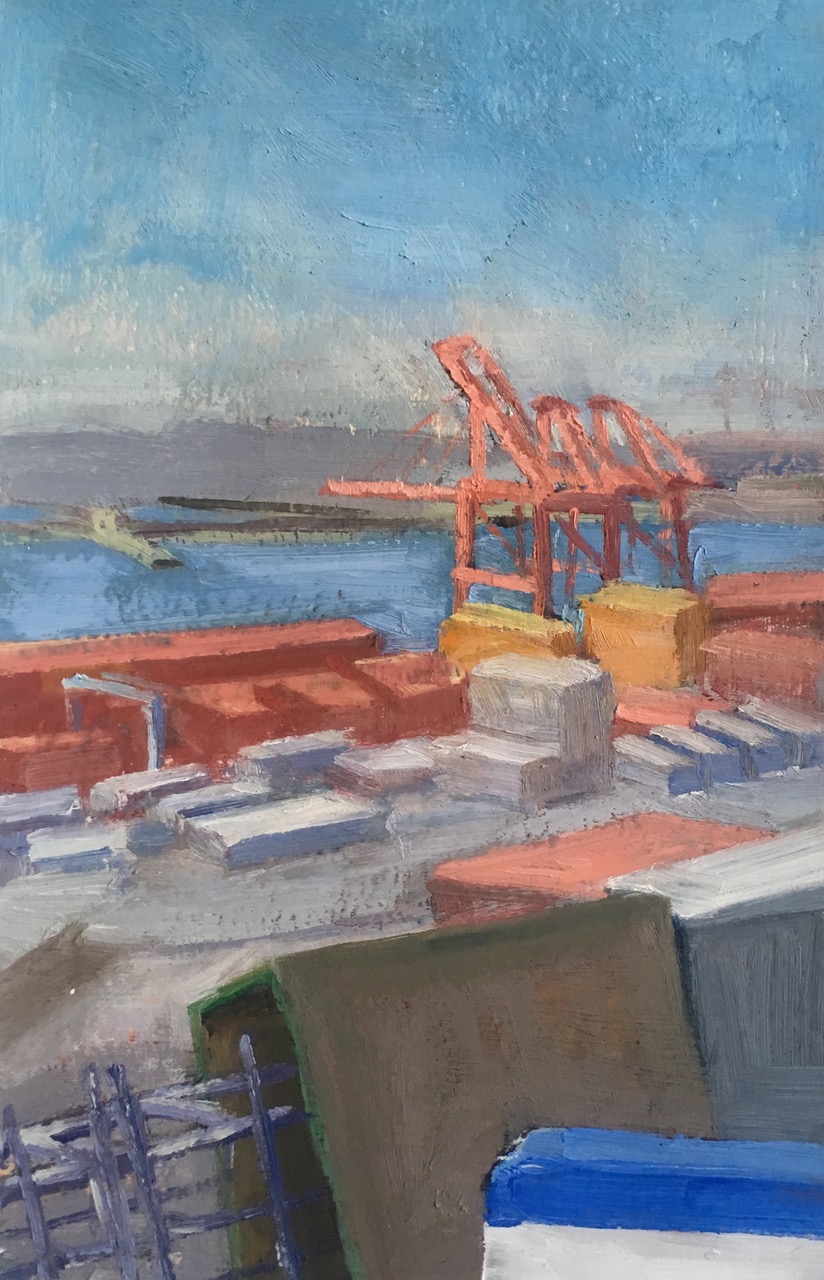 “The challenge of any landscape painting is that you are working in an uncontrolled environment; weather changes, objects move, and light disappears. An active construction site compounds the challenges. The availability of locations to paint would change depending on where the work needed to be done. I felt so privileged to witness the construction of the new bridge. Other than the many skilled people that worked to build the bridge, few have seen it from the vantage points I painted from. I feel lucky to have been even a small part of its history. I also enjoyed meeting the workers themselves who built the bridge. Many of the workers would approach us while we painted to ask us about the project. All were welcoming and sincerely curious about our painting. We would just as eagerly ask them about their work, and they seemed to enjoy sharing their experiences with us.”