For six years Ilkay Basugur and Damian Ross, owners of Fermentality, shared their fermented foods, ketogenic baked goods and passion for dietary health at farmers markets across the southland. But now, local clientele may rejoice that the nomadic business now has a permanent location in Lakewood.

The new storefront at 6761 E. Carson St. offers all the kimchi, sauerkrauts and probiotic drinks the local business is well-known for. But the new space also allows the company to centralize and expand the newer half of its business: the bakery.

The bakery, which is called Niya by Fermentality, specializes in gluten-free and sugar-free baked goods, meaning that its batches of cookies, Bundt cakes, parfaits, fruit cobblers and bagels are keto and diabetic friendly.

“There’s really no other bakery in the area that serves all of those markets,” said Ross. “People tell us they have to go to Torrance or Anaheim to find keto, gluten-free [baked goods.]” 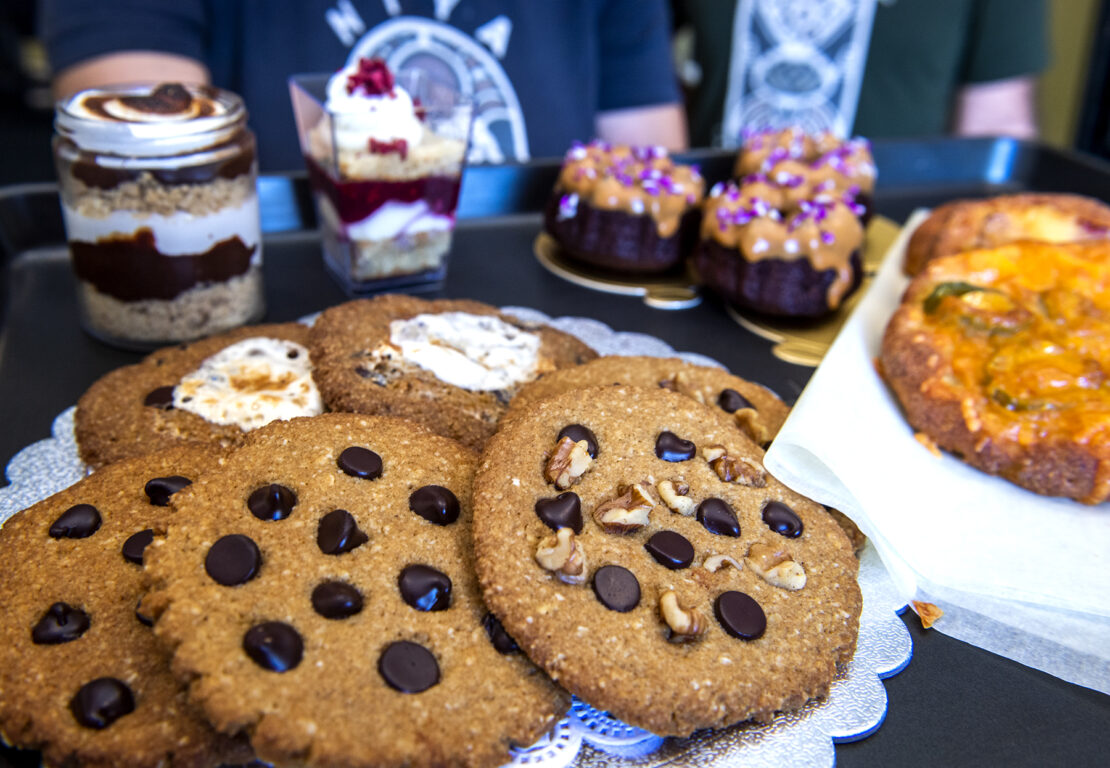 Fermentality is not a dine-in bakery. Most of the space is occupied by a spacious kitchen in the back, which was a key element the couple was looking for when they began shopping for a location in 2019. Rather fittingly, the space had previously been another gluten free bakery called Way Beyond Bakery.

The owners have opted for a grab-and-go model. Patrons can peruse a few refrigerators stocked with their fermented foods and other products, like teas, spices, and hot sauces, from other companies they met at farmers markets. The space also features a display case with fresh chocolate chip cookies, pizza bagels, Bundt cakes and more made by Basugur. The baked goods selection rotates often, Basugur said, so guests may often find something they haven’t tried before.

It’s been a longtime coming to reach this point, they said, and they’re proud to finally have a place to call their own, marking a new step for their business and their mission of helping people heal their bodies through food, as they have done for themselves.

Before their fermenting fascination took hold, both Basugur and Ross worked in the restaurant industry—Basugur in upscale restaurants and Ross in family-owned bistros. But by the end of their decade-long careers, the wear and tear of the lifestyle was catching up with them. Back then Basugur, in particular, was struggling with frequent colds, persistent body inflammation as well as muscle and joint pain, she said.

It was around 2015 that the couple discovered an emerging study of science that pointed to the importance of a healthy gut microbiome, referring to the microorganisms, such as bacteria, that live in human digestive tracks. A major positive in this research was its benefits in reducing body inflammation.

Basugur explained that she had been dosed with rounds of antibiotics to treat her chronic bronchitis in her youth. The treatment, though, as a side effect has been shown to kill the “good” or healthy gut bacteria the human body naturally carries. Basugur had studied biochemistry in college and wagered that her symptoms could be related.

The couple began incorporating kimchi and yogurt into their everyday diet and saw that it not only helped with inflammation but improved their overall digestive health and energy levels. Over time they started fermenting home and began experimenting with other vegetables, such as cucumber and carrots, and with fermented drinks like water kefir and kvass. Fermented veggies at Fermentality and Niya, a gluten-free keto bakery of breads and desserts in Lakewood Wednesday, Aug. 31, 2022. Photo by Thomas R. Cordova. 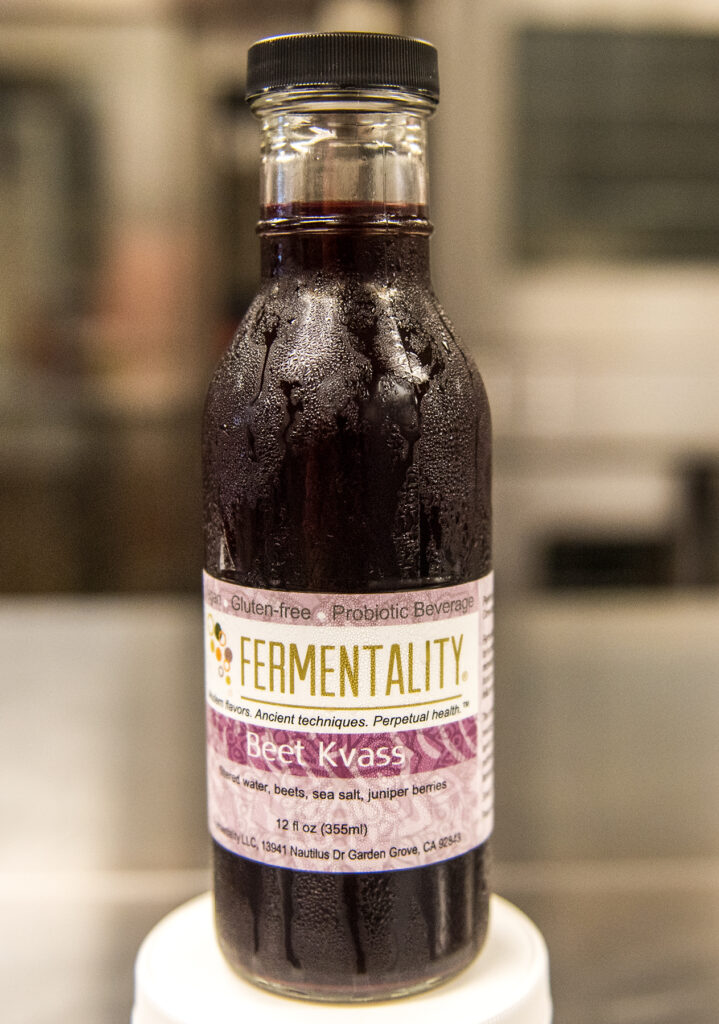 Beet Kvass is a probiotic beverage at Fermentality and Niya, a gluten-free keto bakery of breads and desserts in Lakewood Wednesday, Aug. 31, 2022. Photo by Thomas R. Cordova.

The process they use to make their fermented bites is known as lacto-fermentation. All the process requires is vegetables, salt, water, a glass jar and a bit of patience.

“It’s probably the most basic type of fermentation,” Ross explained.

It took a few months for the couple to find their groove with flavor and consistency, but by 2016 they felt confident enough to start selling at local farmers markets.

“Also, our fridge was so full, so we had to do something about that,” Basugur joked.

They quit their restaurant careers and started working out of a shared commercial kitchen, selling their foods at farmers markets in Los Angeles and Orange Counties.

“At one point we were doing it five times per week,” Ross recalled.

As their business grew, so did the couple’s interest in dietary health. Though Basugur and Ross had seen much improvement with fermented foods, Basugur still struggled with some of her symptoms. To treat her condition, she began slowly eliminating refined sugars and other carbohydrates from her diet.

This led her to the ketogenic diet, a high-fat, moderate protein and low-carbohydrate diet that leads the body to rely on fat for energy, rather than carbohydrates. The diet had originally been created to help treat severe epilepsy in children, according to John Hopkins Medicine, but in recent years has reached mainstream popularity because of its quick weightless results.

“I started doing research and it wasn’t what everybody was thinking—that it was just a trendy weight loss program—it was a health-focused diet,” she said. “It was created for long-term epileptic health, but it also helped in reducing inflammation, seizures, gut health and overall health.”

Basugur began baking alternatives to the breads and baked desserts she’d always enjoyed, playing around with alternative flours, like almond and coconut, before she also found her stride. When they began testing their new product on their farmers market circuit in 2018, people loved it.

“Keto, it was pretty trendy at the time,” Ross explained. “Everyone was trying it, but now we’ve found there’s a lot of long-term clients who’ve really gotten into the lifestyle. A lot more people are finding out that it’s just better to eat gluten free, even if you don’t have celiac. It’s just better on the gut and reduces inflammation.” 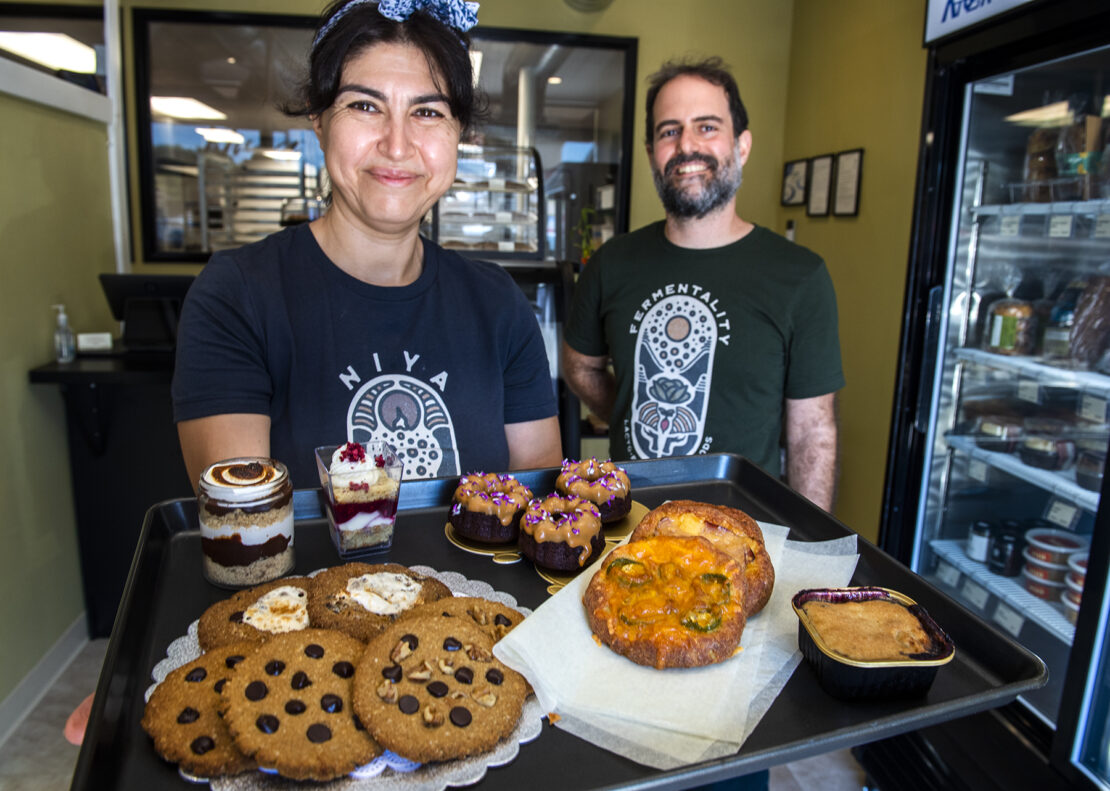 Chef Ilkay M. Basugur, left, and Chef Damian Ross holds a plate of various breads and desserts while at their storefront Fermentality and Niya, a gluten-free keto bakery of breads and desserts in Lakewood Wednesday, Aug. 31, 2022. Photo by Thomas R. Cordova.

What the couple also believes sets their bakery apart is their dedication to using high quality ingredients. A problem they’ve seen with the diet is that big companies will often modify or use ingredients with low nutritional value to reduce the net carbs or sugars in their products. They call it “dirty keto.”

“Whenever something becomes trendy really quickly, people starting using shortcuts, making products that are more affordable, but not using clean products. That’s why we call it ‘dirty keto,’” Basugur said.

The main ingredients in their baked goods feature almond flour, coconut flour and flax seed. To sweeten, they use monk fruit. For fiber, they opt for psyllium husk, which is helpful in lowering cholesterol.

This practice also translates to their fermented foods. Ross said they source the bulk of their vegetables and other ingredients from local growers, chiefly Azteca Farms, Wiser Family Farms and Golden Farms, whom they built relationships with during their years at farmers markets.

“We’re just trying to make nutritious items so that people feel good after they eat our food,” Ross said.

Fermentality will be celebrating its grand opening from 7-9 p.m. Tuesday, Sept. 13.  Guests will be able to sample their many foods and goods, including low-carb pumpkin bread, apple cinnamon doughnuts and pumpkin French toast pudding. The event will also feature food from local Cambodian barbecue pop-up, Battambong BBQ.

Fermentality is at 6761 E. Carson St. The storefront is open Wednesday through Friday from 10 a.m. to 6 p.m.