For a show about stripping, Long Beach 'Finding Magic Mike' contestant finds the experience was more than skin-deep • the Hi-lo
- ADVERTISEMENT -
BEST FEST 2022® Live and in person — June 16. RSVP NOW

Michael Thântrọng isn’t one to shirk from challenging situations. In his day job as a behavioral therapist, he coaches people diagnosed with autism. A Muay Thai and kickboxing trainer, his fitness journey has put him in professional fighting rings. But nothing could have prepared Thântrọng for the level of dread he experienced when, last summer in Las Vegas, he was tasked with giving a lady a lap dance.

“My very first lap dance was performed in front of 25 dudes, professional choreographers and a camera crew knowing that this is going to be put on global television. It was terrifying. I blacked out, I don’t remember a lot of what happened,” Thântrọng said.

Perhaps his lapse in memory was for the best. The five-second clip viewers see of Thântrọng’s fateful lap dance on HBO’s “Finding Magic Mike” was more comedic than sexy, mainly by way of a few too many vigorous pelvic thrusts toward the floor. Still, however his autopiloted body decided to move managed to land him a spot in the finals.

“I was shocked,” the Long Beach local said. “My legs gave out. I couldn’t believe I was making it to the top 10.” 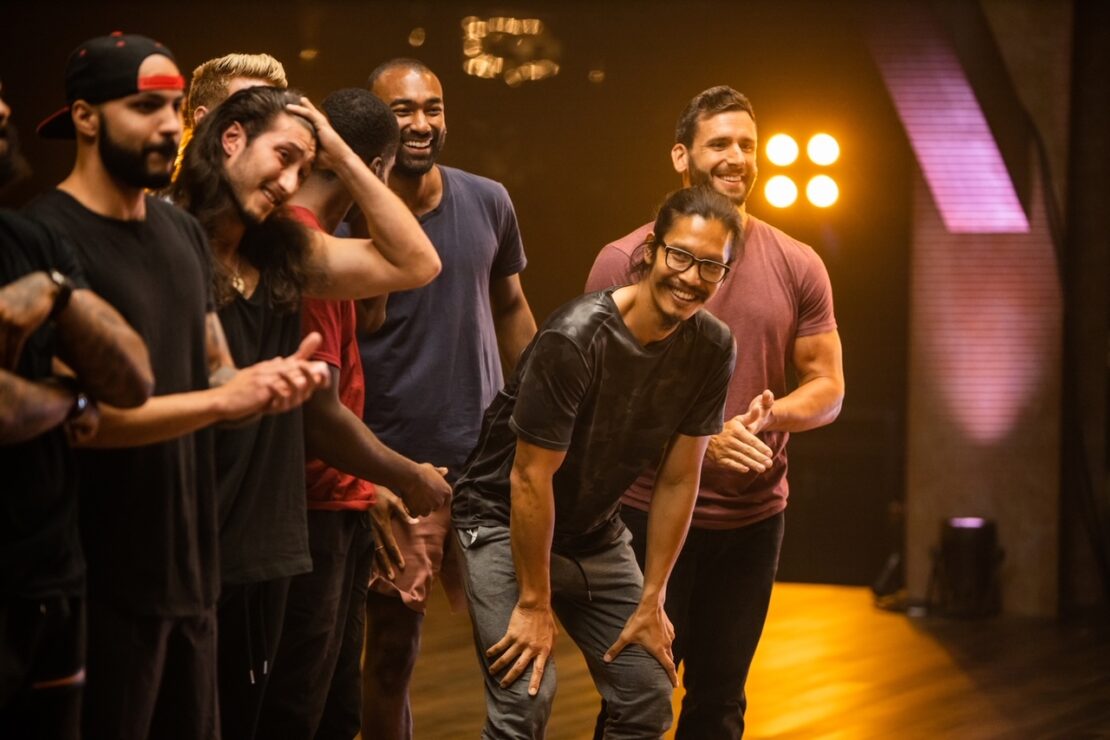 In the new HBO Max reality series, which aired Dec. 16, 2021, Thântrọng and 49 other “normal” men (i.e. non-professional dancers or strippers) compete for the chance to win $100,000 and the opportunity to perform with the “Magic Mike Live” show in Las Vegas, a still-running show directly inspired by the wildly successful 2012 film “Magic Mike,” starring Channing Tatum.

By the end of the first episode, the 50 men are whittled down to 10, with those who passed having managed to survive learning choreography while stripped down to their briefs and giving strangers lap dances.

For a reality show about male strippers, the series doesn’t disappoint on its promise of shirtless men performing scintillating dance routines, but the heart of show lies with its contestants, a diverse group of men from all over the country selected not just for their dancing potential, but who are looking to overcome personal obstacles. For many, this meant boosting their self-confidence, coming into their own sexuality, or allowing themselves to be more vulnerable. 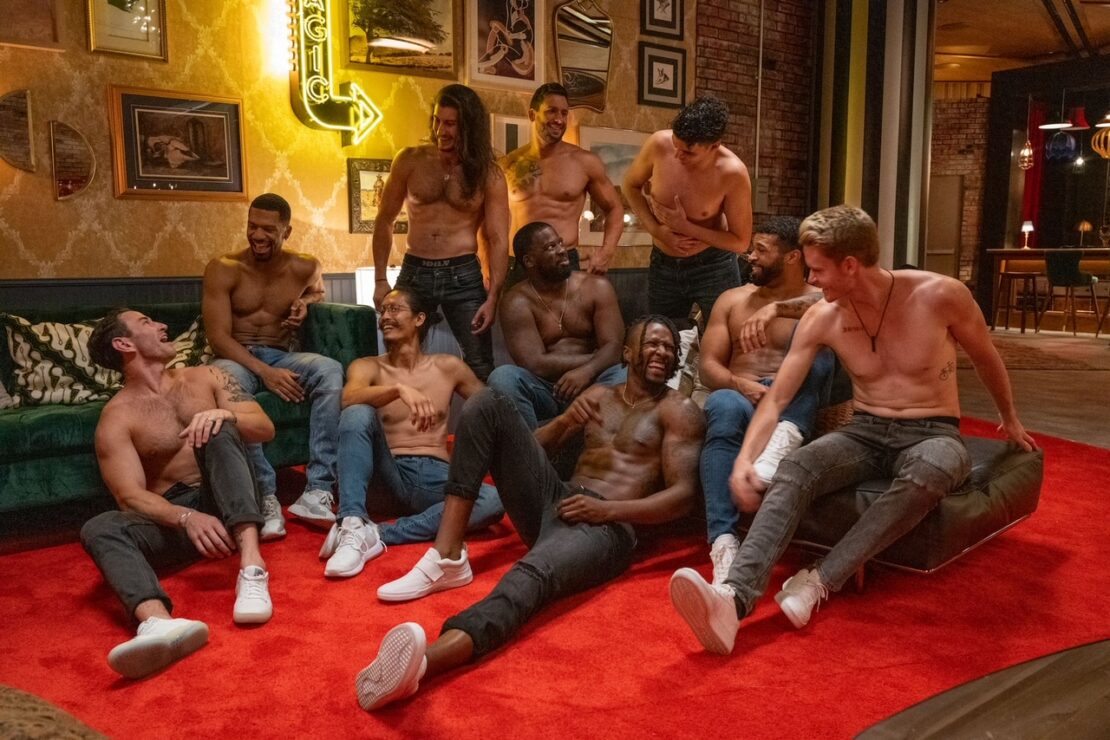 Viewers learn that Thântrọng is looking to become more sexually assertive for his girlfriend. Shy, soft-spoken, and a virgin up until he turned 30, Thântrọng, now 42, admits that when it came to women, he wasn’t one to put himself out there. Now in a committed relationship, Thântrọng reveals that he’s still carrying the insecurities he’s felt for most of his life.

Learning to be more assertive may have become a dominating motivation for Thântrọng on the show, but his initial interest in auditioning was for the chance to learn how to dance, a skill he said he’d wanted to learn for years in part because he believed it might help boost his self-confidence. And what better way to do just that than learning how to dance from the choreographers behind the film (and live show) that have been making women swoon for a decade?

Ultimately, though, it was his girlfriend that gave him the final nudge.

“We were on the couch, I had my head on her lap and she was stroking my hair and she said, ‘babe, I want you to go to Vegas and be a stripper. Be a good stripper,’” Thântrọng said.

They set some ground rules, one of them being no kissing on or below the mouth. No sex, obviously. His girlfriend relinquished that touching was OK, “they’re going to touch you anyway” she told him.

“When I submitted, I did not think I was going to get picked at all. Like, there’s no chance. And when they called me back it was amazing,” he said. “I was like what’s happening? This is happening?”

That surreal feeling stayed with Thântrọng throughout the entirety of filming. From the grueling 12-hour rehearsals to celebrity meet-and-greets and live audience performances. It was a whirlwind, though at times, he said, it could feel isolating. Outside of filming or rehearsals, the contestants were sequestered in their hotel rooms, “luxury prisons” as Thântrọng called it, without phone access for most of their time on the show.

But being locked away together in their “Magic Mike” bootcamp bred a special bond between the men, culminating in an unquestionable tight-knit brotherhood, all rooting for each other to succeed. Whether or not the producers anticipated this would happen, its result is easily one of the most wholesome aspects of the show.

“Being around these guys, when I would mess up a routine, it wasn’t like, ‘oh you messed up,’ it was like, ‘oh let’s work on this, how can we help you,’” Thântrọng said. “It didn’t feel like a competition.” 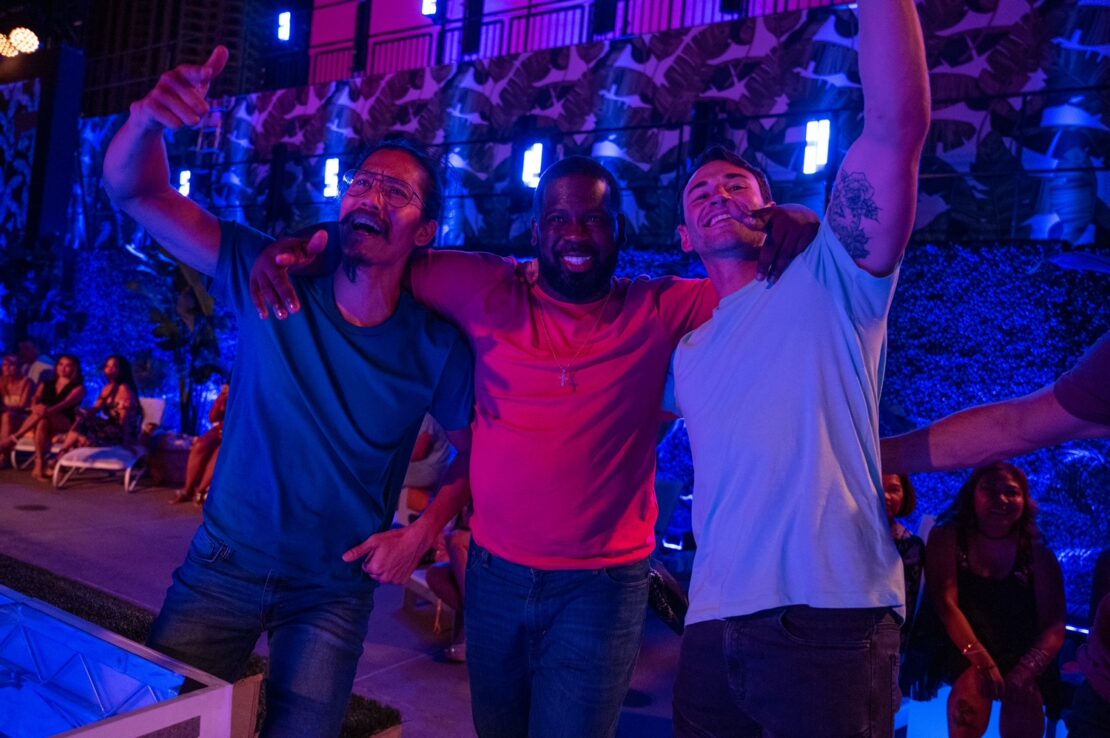 Amid a reality TV culture that thrives on drama, back-stabbing and trash-talking, “Finding Magic Mike” is a welcome antidote. The men are respectful, earnest, and remarkably honest about spilling their deepest fears and insecurities. The accepting culture surrounding the show played a major role in achieving this, Thântrọng said, and was maintained by all involved in the series, from cast to crew.

“The whole show is about respect and body positivity and sex positivity,” Thântrọng said. “We were able to be vulnerable because we felt safe and supported. A lot of men don’t have that…I think we’re finally evolving to the point where, look, this is part of masculinity. We have a spectrum of emotions, not just angry, not just happy. Being sad and scared, you can have all these feelings and not be ashamed of them.”

In many ways, “Finding Magic Mike” presents itself as a more evolved and mature version of the original film, which fell short of achieving much emotional depth or personal growth from its characters.

Of course, as deep as the show delves, it’s not without its cringe-worthy moments— what would you expect from a show that takes 10 novice dancers and instructs them, as with one particular dance routine, to “just hump everything?” 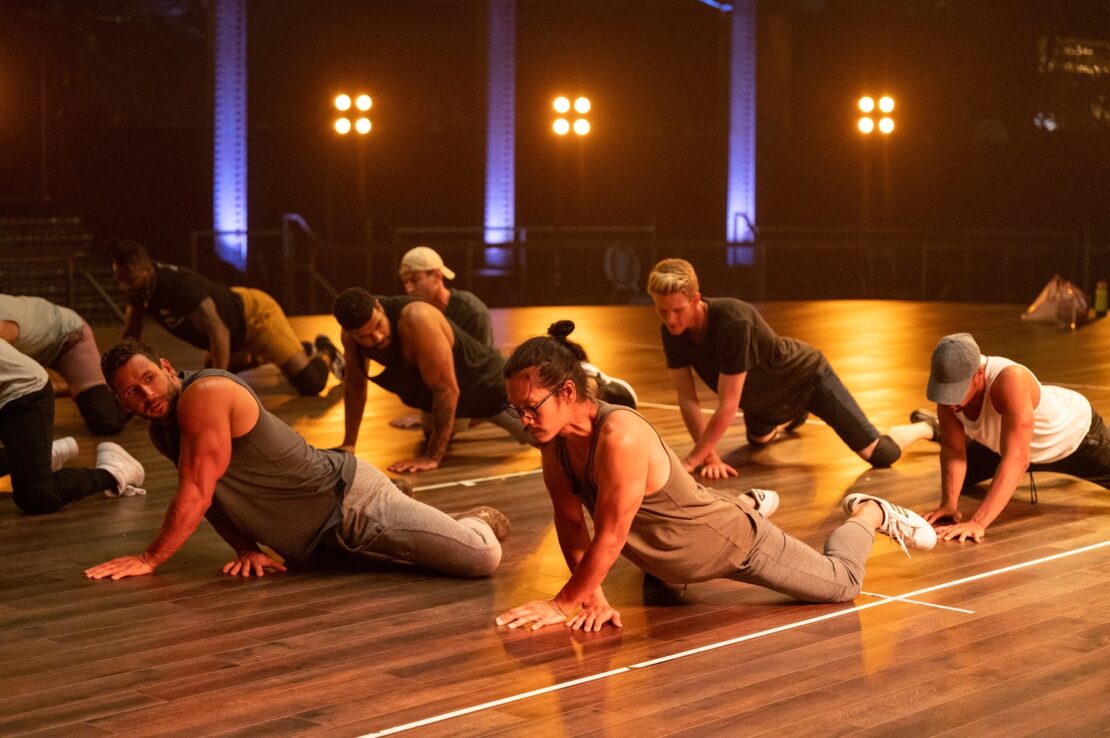 “I cringe sometimes now when I watch it…but you know, I’m proud of it. I’m happy I put it out there, it’s just part of growth, you know, to embrace that cringe. We’re all gonna cringe together, cringe with me,” Thântrọng said. “You can’t really love yourself until you love every part of yourself.”

But between the cringe, viewers are rewarded watching its cast, in near real-time, overcome both physical and emotional obstacles. One of the most visible transformations for Thântrọng was seeing him blossom into a capable dancer in only a few episodes, even in spite of an ankle injury that didn’t make it into the final cut of the show. Though (spoiler alert) his improvements weren’t quite up to par to make it past the third episode, off-screen Thântrọng reveals that it was, understandably, mostly nerves that kept getting in the way.

“I would nail all of the moves during rehearsals. And then when we did it on stage, I think I was definitely getting in my head,” Thântrọng explained. “I was worried about messing up and I was worried about letting the choreographers down, letting my guys down. There was a lot of anxiety and nerves. Especially not having a performance background. My biggest performance was in sixth grade, I was in a Tom Sawyer play. So getting on stage in front of screaming people doing all these sexy hip gyrations, people looking at me, not my element. Not something I’m used to doing let alone doing it on a national stage.” 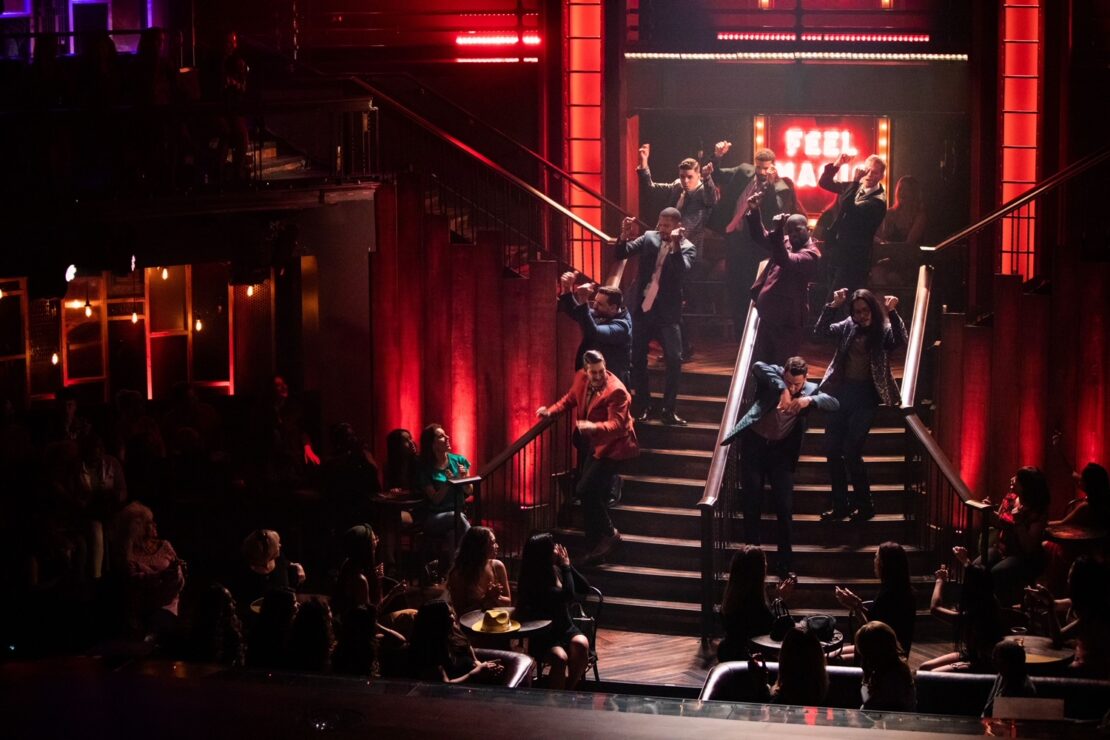 What viewers weren’t as privy to was the internal transformation that Thântrọng experienced off-screen, the small moments throughout the show that culminated in a realization that he’s good enough just the way he is.

“I’ve always thought that I needed to be more assertive and maybe that’s not who I am. I’m trying to find my happiness and I’m probing different things, and maybe being super assertive isn’t where my happiness lies. Maybe it’s being more—me. Not having some standard that I need to live up to, or some line that I need to measure up to. And I think the show really helped with that,” he explained.

In other words, the show’s premise, to help men feel more confident and improve their feelings of self-worth, actually worked. And for Thântrọng, the change was so profound he noticed it as soon as he came home.

“When I got home….we went and got dinner. I remember being out and….the energy of people around me was different. I was smiling more, but they were smiling back. It was just immediate. I came back like a new person, but it was more of a solidified version of what I already had,” he said. “I never in a million years thought I would be on a reality show and that it would completely change my life for the better.”

As for his love life? That’s looking good, too.

“We are definitely communicating more,” he said. “We are more affectionate physically and I’ll just leave it at that.”