‘Peru was born in me’: Waiter-turned-chef strives for authenticity with Casa Chaskis restaurant • the Hi-lo
- ADVERTISEMENT -

Agustín Romo tosses arroz chaufa over a flame in a kitchen the size of two king-sized beds, illuminated only by a small window.

He opened Casa Chaskis in 2018 in West Long Beach, a Peruvian restaurant influenced by the Andes Mountain region, with dishes such as tallarines verdes (green noodles) and lomo saltados (stir-fried beef).

But this master Peruvian chef is actually Mexican, born in Jalisco and raised in Long Beach.

“That’s our dirty little secret,” he said, with a smile.

Romo, now in his 30s, said he fell in love with the food and the culture while working as a waiter years ago as a teen.

“I might not have been born in Peru, but Peru was born in me,” he said.

When Romo worked as a waiter at Wakatay Peruvian-Nikkei Restaurant in Gardena, he was first drawn by the smells of the food. He then began watching the cooks sauté in woks, typically used in Asian cooking.

Growing up with Jaliscan parents, seeing Latin food cooked so differently fascinated him. Peruvian gastronomy has been heavily influenced by an influx of Asian immigrants to the region over centuries.

After persistent begging for a teacher, Romo said, Ana Hiroko Narita, a Japanese Peruvian chef at the restaurant, agreed to take him under her wing. He’d called her Tía Hiroko (no relation) as a name of endearment. What followed was a lot of trial and error.

He’d cook the food all wrong, such as seco de cordero (lamb stew), he recalled—and Tía Hiroko would tell him so. She’d actually burst into laughter, he said, and “it motivated me more.”

She’d sit down with him and review how to fix his mistakes, such as using the correct bread or the duration of marinating different meats. “I wanted my food to come out exactly like hers,” he said. “I wanted to be just like her.”

And, eventually he improved—and she approved.

His first business venture was creating packs of Peruvian spices for amateur cooks, dubbed Chaskis Peruvian Seasonings. But after learning that people preferred to eat instead of cook, he delivered boxed lunches in Long Beach and Santa Ana, which is where the name “chaskis” comes from. Also spelled “chasquis,” it means “the runners” of the Inca who would deliver messages during the 13th century. 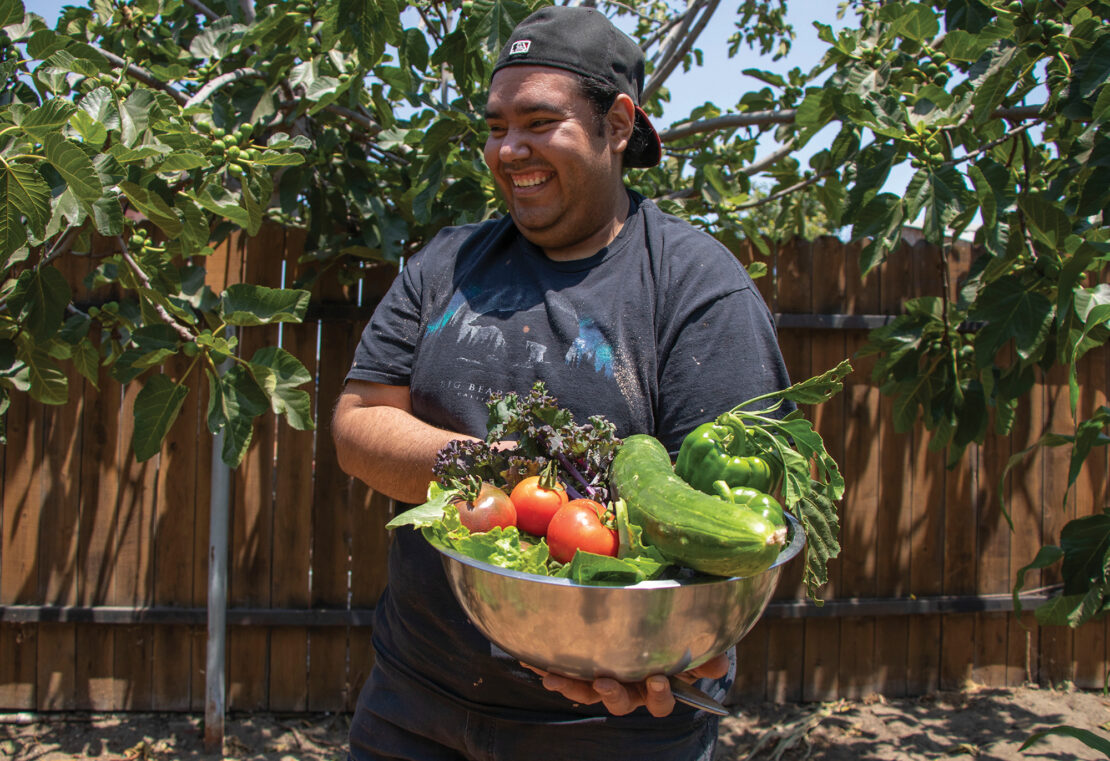 Agustín Romo holds a bowl of vegetables he picked from his kitchen garden at the back of Casa Chaskis, a Peruvian restaurant in West Long Beach, on Thursday, June 17, 2021. Photo by Crystal Niebla.

Romo’s box lunches then evolved into food pop-ups. Simultaneously running a restaurant in Santa Ana, he still had ambition of having his own business. So, after saving enough money, he opened up Casa Chaskis on the Westside in December 2018.

“Every chef dreams of having their own,” he said.

Now, Romo’s trying his best to honor the Peruvian culture and be as authentic as possible.

For starters, he’s precise. Rather than pinching seasoning over the food with his hands, he’ll use a measuring spoon. He sautés his ingredients, such as rice and beef, with a skillful force of his wrist, spilling little to nothing out from his saucepan.

One challenge he confronted: Peruvian chefs can’t easily find fresh ingredients at any supermarket, he said. To his dismay, it’s all frozen.

“Could you imagine making tacos with frozen, chopped cilantro?” he asked in comparison to making Mexican cuisine. Using frozen ingredients is “disgusting” and “has no flavor.”

As a remedy, some of the produce he uses is grown in his newly debuted kitchen garden, a piece of land situated behind his restaurant’s parking lot. He grows citrus fruit, lettuce, kale, bell peppers and corn. In the patio section of his restaurant, he grows Peruvian herbs, such as huacatay (black mint) and ajis amarillo (yellow peppers), a star ingredient native from the Andes in Peru.

In love with culture, he taught himself about Peru’s history and regions, he said. His favorite is the Andean region, which he reflects through the decor of the inside of his restaurant, from miniature alpacas to Andean style of hats with ear flaps called chullos. They also have a word of the day scribbled in chalk in Quechua, the indigenous language of Peru.

He said the biggest compliment a patron can give is a customer assuming he’s a Peruvian native.

“It’s so delicious,” said Brian Michalkow, who came to eat at the restaurant on a recent weekday for the first time.

He learned about the restaurant through word of mouth. “It’s that good,” Michalkow said.