Skip the store-bought food; here are 5 easy recipes to bring to a holiday feast • the Hi-lo
- ADVERTISEMENT -
BEST FEST 2022® Live and in person — June 16. RSVP NOW

You set the table a day in advance, with cloth napkins folded and flowers arranged in heavy vases. You even hauled and polished grandma’s flatware out of storage for the occasion.

You rose early and picked thyme leaves off a stem and sliced potatoes at exactly one-eighth of an inch. You separated whites from yolks and beat a meringue until your bicep burned, then pulled turkey guts and a neck out of a carcass and bathed the bird in saltwater for three days.

And when the desserts have cooled, the food is warm, the table is set, that one guest will inevitably arrive holding a paper bag from Ralphs and present to you a plastic carton of cupcakes that are slathered in food dye and icing that is way too sweet, or a warm bucket of chicken from KFC.

Please, don’t be that guest. I’ve honed over the years the art of the passive aggressive “thank youuuu,” and through deft skill learned from my mother—a homemaker’s homemaker—I will edge your store-bought victuals toward the trash.

Here are a few simple recipes to get you started. 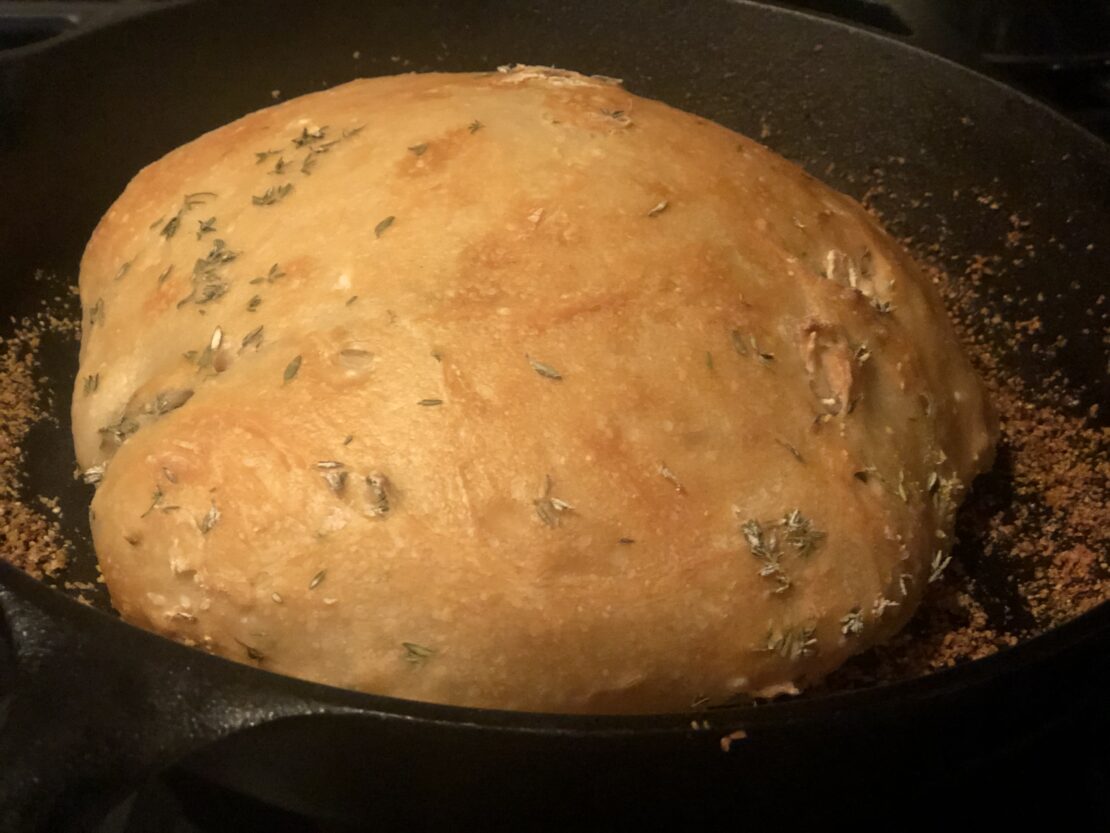 No-knead bread (this version has thyme leaves mixed into the dough). Photo by Melissa Evans.

I’ve adapted my instructions on this one slightly, after the feeble effort of my colleague, Tim Grobaty, who attempted this recipe while hunkered down at home during the pandemic. (Yes, I yelled at him.)

Gently combine all the ingredients. Use a wooden spoon; do NOT put this in a stand mixer. Cover with plastic wrap and leave it on the counter undisturbed for two to 24 hours.

Grease a Dutch oven or cast iron pot or skillet with butter. Form the dough into a ball and place in the pan, covered, for one to two hours.

Preheat your oven to 450 degrees. Bake bread, covered, for 30 minutes. Uncover and bake another 15 minutes until browned.

Recipe from “Better Homes and Gardens.”

These are my absolute favorite cookies. They’re buttery, not too sweet, and always a hit. But like the bread, you’ll need to plan ahead a bit and make these in stages:

Beat one cup of butter in an electric mixer on medium to high speed for 30 seconds. Add a half cup of powdered sugar. Beat until combined, scraping sides of the bowl. Beat in one tablespoon of water and one teaspoon of vanilla extract. Stir in two cups of flour, and one and a half cups of chopped, toasted pecans (don’t skip this part, which should be done ahead of time: spread pecans on a baking sheet and bake at 350 degrees for five minutes; let them cool, then chop them).

Preheat the oven to 325 degrees. Cut logs into quarter-inch-thick slices. Place the slices on an ungreased cookie sheet and bake for 15 minutes.

After they cool, the recipe says to douse them in powdered sugar, but I prefer dipping them (bottom side) into a dark or white chocolate (place on wax paper and refrigerate after).

These cookies also last forever in the fridge or freezer.

Recipe from “Better Homes and Gardens.”

Here’s a recipe that’s low-effort, sort of “homemade,” but does involve opening cans, which I generally frown upon. I’m including it, however, in honor of my colleague Jackie Rae, who I recently learned is a declarative fan of crispy onions. (And you can listen to the two of us talking about holiday feasts on The Word podcast, here.)

Spread into a casserole dish, and bake at 350 degrees for 25 minutes. Sprinkle the top with another two-thirds cup crispy onions, and bake for another five minutes.

From the back of a Campbell’s soup can.  If you’d like a more advanced and homemade option (and experiment with frying your own onions), this recipe from the New York Times is fantastic.

I haven’t tried this recipe, but it comes with the recommendation of Lindsey Dobruck, a fantastic cook and baker and wife of Post breaking news editor Jeremiah Dobruck—and that’s good enough for me.

In a medium saucepan, combine one cup sugar, a half cup water and a half cup bourbon, and bring to a boil over medium heat. Add 12 ounces of cranberries (whole, real berries; not gel from a can, just to be clear) and return to a boil. Stir every few minutes, for about 10 minutes, until the cranberries start to pop.

Remove from heat, and let the cranberries cool for a while, then add another half cup bourbon. Cover and refrigerate. Just before serving, add one cup of coarsely chopped pecans.

Recipe from “Southern Cooking for Company.”

What would a list of recipes in Long Beach be without a selection from Snoop Dogg?

Recipe from “From Crook to Cook: Platinum Recipes from Tha Boss Dogg’s Kitchen.”