If you’re into wine, and you’re into road trips, then chances are you’ve gotten up early, relying on the protective powers of your coffee to guide you safely as you get in your car and take the 405 north through LA, and then up the 101 as you head to wine country.

Why drive all the way to the Central Coast for wine when you can go to a wine store in town? Because it’s there that you can buy wines that often you can’t buy in stores. Truly special bottles that are made by people with purple hands, pink faces, and stories that can bring you to tears; people who grew the grapes and squished them personally. And the very fact that you’ve found this hideaway means that each time you open a bottle, you’re going to tell a story of your own.

Jodi Meade and Deb Jarrett understand that, and now they’re making that drive for you. They’re bringing all of those hidden gems into their shop where you can taste them, buy them to bring home, open them up to drink there, or save them in your personal temperature-controlled locker.

“We are personal friends of most of these labels that we’re carrying — these winemakers and vineyard owners — we have personal relationships with them and they are ecstatic that we are bringing them down to Southern California,” Jodi Meade tells me as we wander through the first wave of their wine selection.

On Dec. 4, the couple opened their Belmont Shore wine shop, The Wine Beach,  at 5351 Second St., and are already stocked with an impressive array of obscure, small production wines from the Central Coast with a focus on Paso Robles, Lodi, and Santa Ynez at the moment. 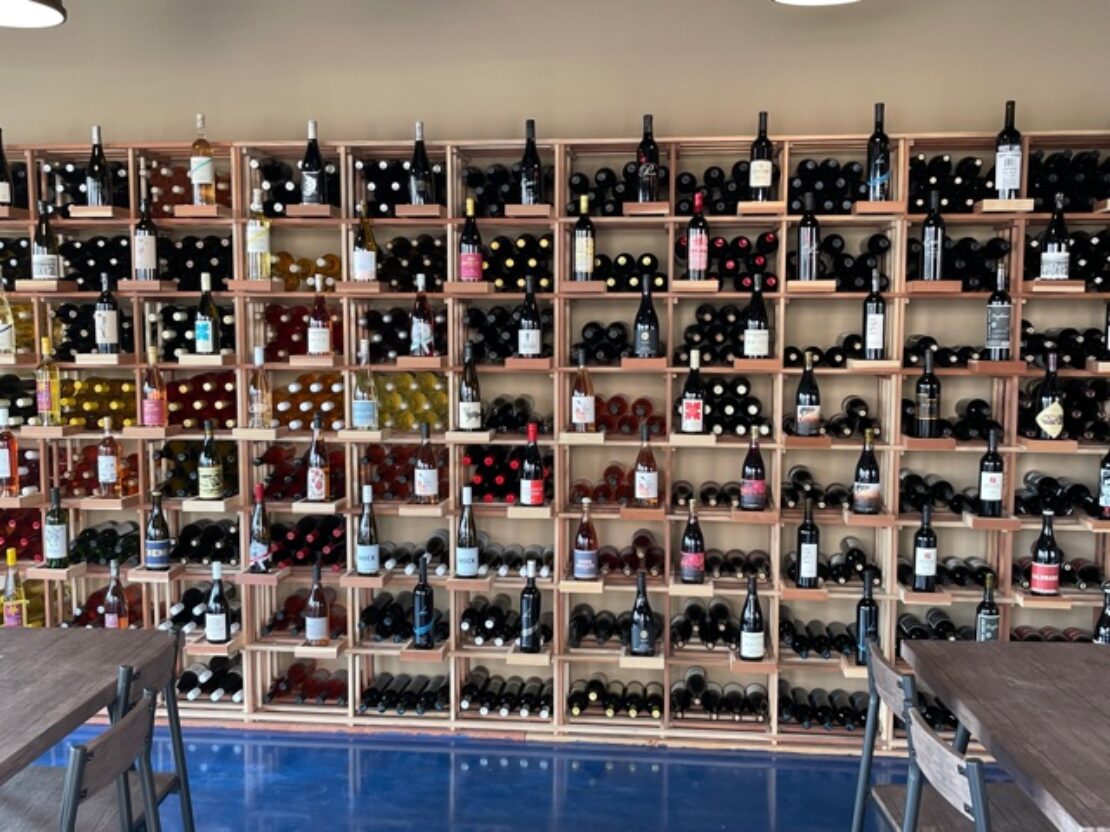 A wall of wine at The Wine Beach. Photo by Matt Miller.

What sets The Wine Beach apart from any other place to buy wine in Long Beach is they really know what they’re talking about. You don’t have to worry about asking for wine pairing advice, worried that you won’t figure out if the person giving you the advice actually knows what they’re talking about until it’s too late, because they both have very extensive backgrounds with wine.

Jodi Meade’s family owned a vineyard and she has been around the nuts and bolts of wine her entire life. And Deb Jarrett is actually a level 3 sommelier (out of four levels of expertise).

What does level three mean, exactly?  A sommelier’s job is to understand wine, and most importantly, know exactly how to pair it to whatever you’re eating. And the amount of knowledge needed to become a high-level sommelier can be quite staggering.

For example: Becoming a level one sommelier is essentially the same as sitting down at the DMV, reading the rules of the road booklet, and then taking the written driver’s license test. The knowledge for a level two sommelier is equivalent to watching your favorite movie until you can quote it, know every scene, and all the movie trivia — an impressive party trick, but certainly obtainable for anyone with an interest. A level three sommelier needs to be able to recite John Steinbeck’s “Grapes of Wrath,” and “East of Eden,” verbatim, and in any chapter order. And a level four (master level) sommelier needs to be able to memorize and intimately understand …. well, let’s just say a master “somm” is somewhere between Yoda and Google.

Which brings me to another reason The Wine Beach is a special place: This wine shop has a full kitchen. And Jarrett and Meade are designing the rotating menus themselves specifically so the foods coming out of the kitchen are already paired to the wines they’re featuring.

“Starting in the beginning of the year we’ll have a passport,” Jarrett says, speaking of their forthcoming wine dinner series. “Say we’re hosting Italy: We’ll have four Italian wines for a sit-down dinner, and we’ll host you from the beginning with their whites, through to their reds.” So you’ll get a chance to understand, not just what makes Old World wine so special, but how food and wine work together.

In addition to international wine dinners, they’ll be hosting winemaker dinners (which if you haven’t ever been to a sommelier paired wine dinner, you really need to put this on your bucket list — it will change the way you eat forever) where you’ll be meeting the winemaker, go through a tasting, and have a prix fixe dinner during which the winemaker will be talking about their wines, as you dine to a specially paired menu.

The series will kick off in the new year by hosting a “women winemakers of the year” dinner series, January through March.

Also unique is their wine club ($65 per month for two bottles: red/red, white/white, or red/white). On the first Sunday of every month, wine club members are invited to taste the wines and make their selection from the wines being featured, which is great if you’re the type who likes to know what you’re buying before you buy it.

And, unlike most wine stores that have a wine club, the club wines are so special that they will remain exclusively for wine club members only and will never be offered to the general public.

In addition to the tastings, and wine dinners, and wine club, they will also be offering 16 wines by the glass, eight white and eight red, at the bar, a selection that will change every week. (And you can grab a glass of wine to-go too if you’re heading across the street to the beach — but you can’t drink on the beach … that’s illegal.)

The really cool thing about small production wine is that it’s more than just a bottle of wine, it’s a summer captured in a bottle. It’s wildfires and rains, heatwaves and droughts, sunny days and foggy nights all trapped in those grapes, trapped in that bottle, creating flavors that no mass-produced grocery store wine can ever imitate.

“Have a great glass of wine, don’t be intimidated, because it’s about enjoying a glass and hearing the story,” Meade said. “We just like to take the scary out of wine.”