The new restaurant, Shootz, celebrated its grand opening last weekend, where first-time patrons were greeted by hula dancers, a live DJ and a two-hour wait for its Hawaiian fusion food, which features Hawaiian barbeque mainstays such as loco moco (white rice, burger patty, topped with a fried egg and gravy) and creative takes on big island staples like the sweet Spam Brûlée musubi.

“It was a long line, but it was a really good turnout,” said co-founder Michael Dancel.

It’s also been a good year for the company, which opened its second location at the Rodeo X Public Market in Ontario this past March (the first opened in October 2020 at the Stanton food hall Rodeo 39).

Dancel said he and co-founders Harold Walters, Christian Solomona and Nolan Perez had been eyeing Long Beach for their third Southern California location for quite some time, but ultimately settled in North Long Beach because they felt their concept would work well at Uptown Commons, which already features several fusion food restaurants at its locale. 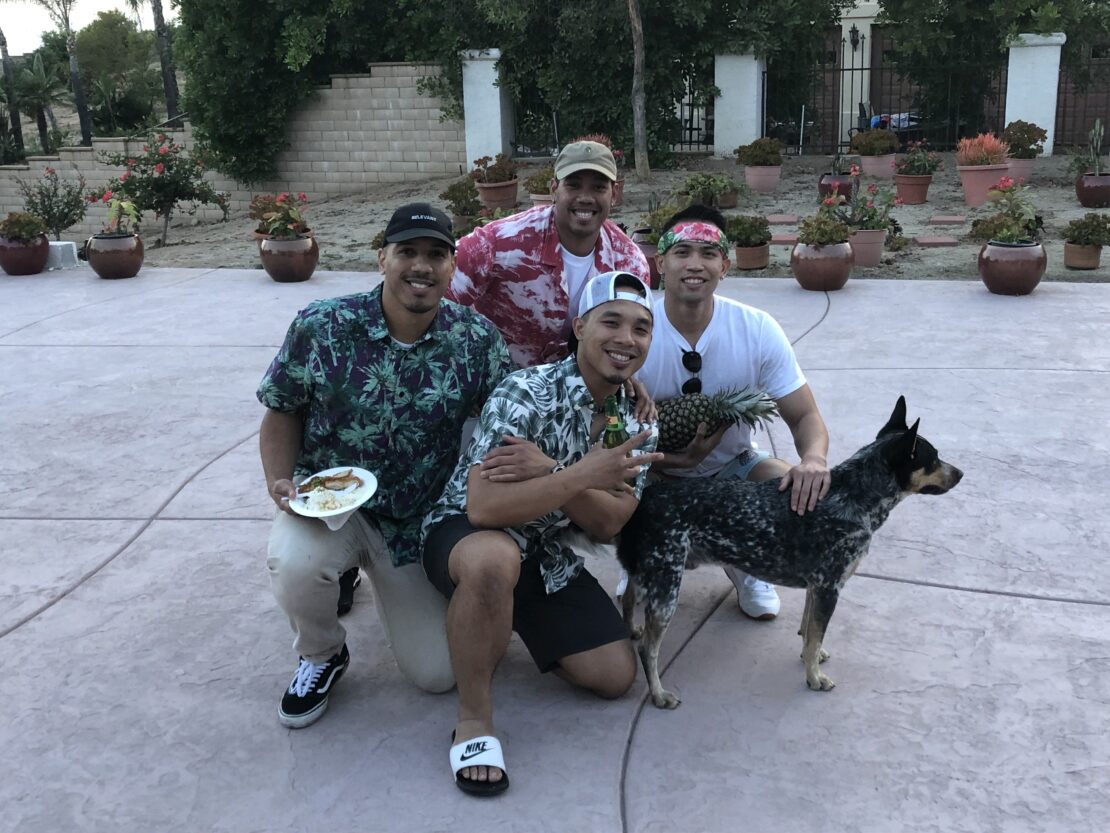 The partnership behind Shootz was a long time coming, Dancel said, since the guys have been friends for over a decade after they met playing basketball at a park in Riverside. With each of their own respective backgrounds in the hospitality industry, Dancel would often rope in his friends to help him open other food concepts, including the Asian-fusion food restaurant Madbun in Chino Hills.

When the four finally came together to open their own restaurant, they landed on a Hawaiian food concept because they saw the potential to infuse some of their own cultural food traditions into popular Hawaiian cuisine.

“We all have islander backgrounds,” Dancel said. “We’re Filipino, Samoan, Guamanian. And Harold, I think his grandparents were from Hawaii. We’re just taking our roots, our experiences and our love for Hawaiian cuisine and meshing flavors.”

Hawaiian cuisine is already marked by distinct cultural influences from its long history of settlement and immigration into the Hawaiian Islands. Though musubi is widely understood to be a Hawaiian invention, it’s made from an American-made meat product and wrapped in the Japanese traditions of onigiri, with rice and nori, or thin strips of dried seaweed. And lest we forget that chicken katsu, a fixture of Hawaiian barbecue, is a fried invention of Japan.

Shootz plays up on the spirit of invention by fusing other distinct Asian flavors to the mix. Their most popular item on the menu, the kimchi butter katsu chicken, is a bright nod to Korea’s popular spicy fermented vegetable dish. 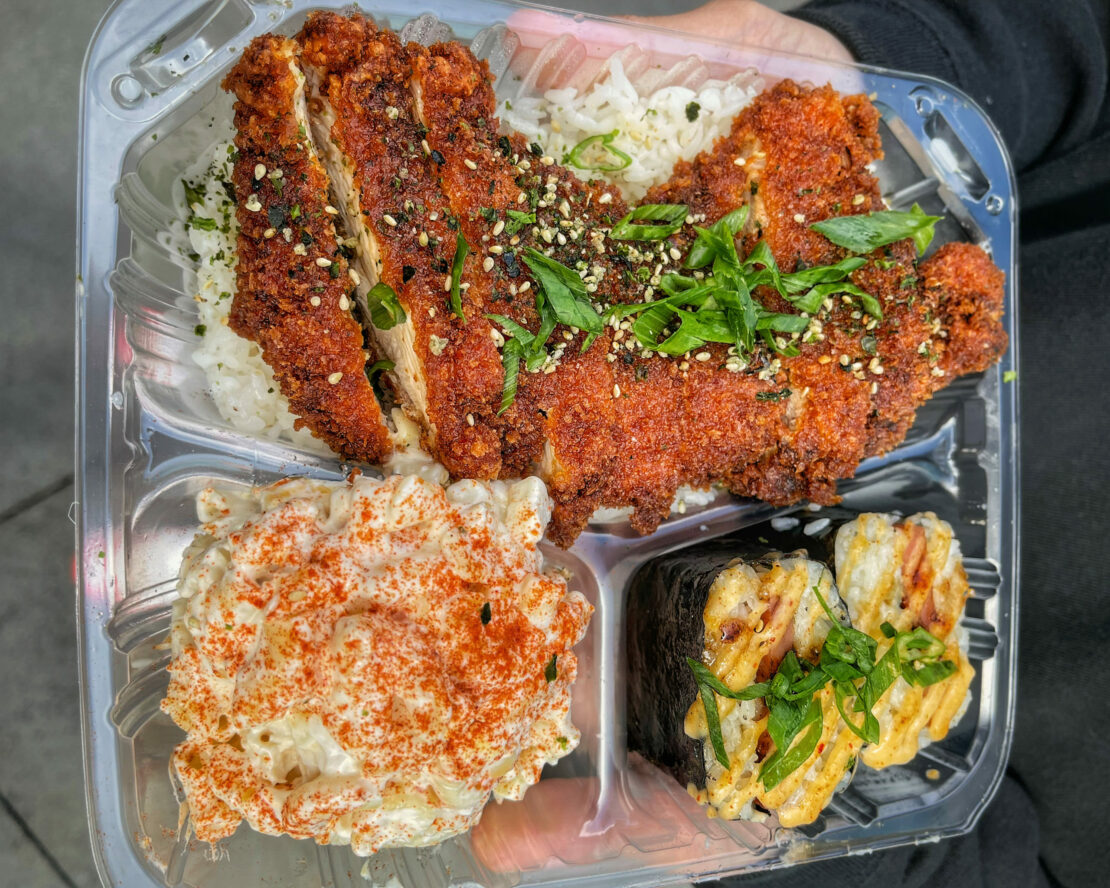 Other influences are more subtle. The Spam Brûlée musubi, Dancel explained, was inspired by a glazed ham musubi his high school friend’s father would make. 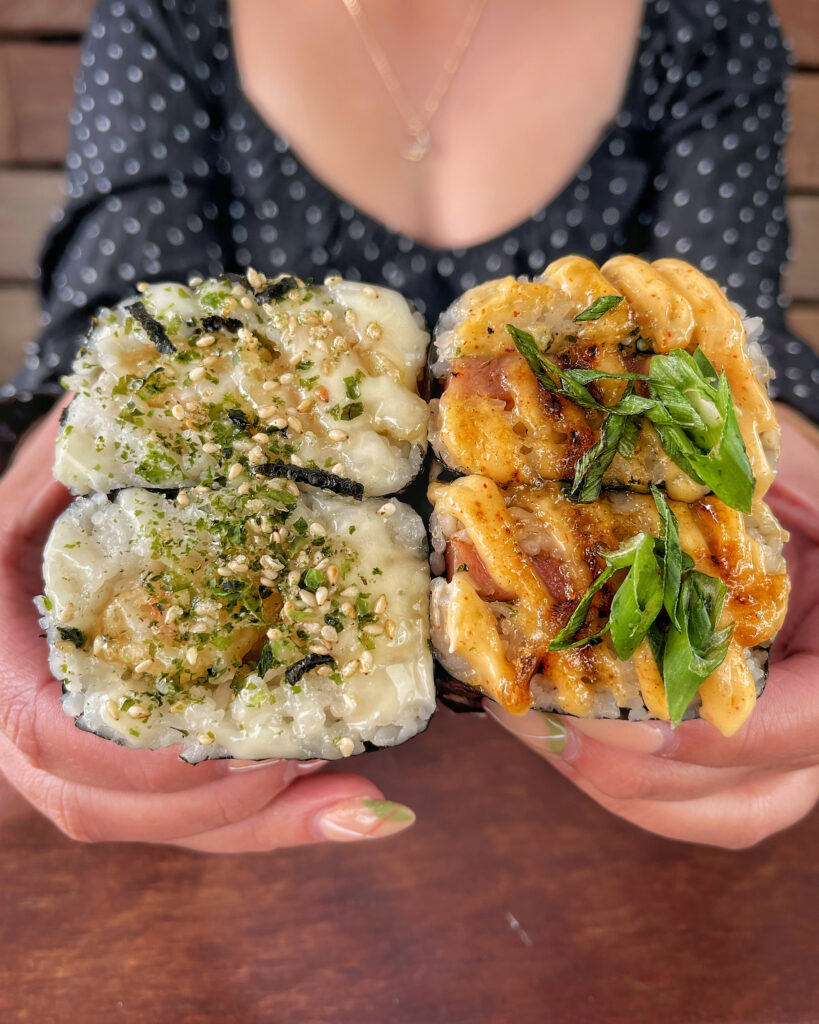 A couple of trips to Shootz would be enough to try the entire menu, which is intentionally small and quality-focused. There are four main plates served with two sides: the kimchi butter katsu chicken (which can also be served as sandwich), loco moco, short ribs and jalapeno garlic shrimp. There are also two musubi dishes, the Spam Brûlée musubi and honey coconut shrimp musubis and three sides dishes, including a popular macaroni salad.