Walking into Tarella “Rella” Golden’s apartment, it’s easy to see why the self-proclaimed “Egg Roll Queen” is looking to move into a restaurant space ASAP.

Her small kitchen barely offers enough room to turn around, the fridge is packed to the brim with containers holding fillings for her deep-fried delicacies: a tupperware container filled with sauteed cabbage and carrots, garlic sauce for her garlic-lobster rolls, and an assortment of veggies, chicken, steak.

“I can’t sell ‘em from my house for too long, I need more space,” said Golden, who is currently in the market for a move-in ready restaurant space, ideally in North Long Beach, where she grew up and currently lives.

She learned how to make egg rolls from her mother, who herself was taught by their neighbors while the family lived in Hawaii for several years when Golden was a toddler.

The Golden’s neighbors were an international bunch: a woman from Japan, a man from the Philippines, his Guamanian wife. They all made some form of egg rolls at home, sharing them with their friends, including Lorna Golden, Rella’s mother, who fell in love with her Japanese neighbors’ harumaki and the Guamanian woman’s lumpia.

They were happy to show her how each was made, Lorna Golden remembers, and eventually, she created her own fusion version at home. “What I did is I just took it from both of them: a little bit from one, a little bit from the other,” she said. Then, she began practicing. “I just kept doing it and doing it, so I wouldn’t forget how to do it.”

Soon, she enlisted her daughter in the effort. “She was watching, so I figured: I might as well teach her how to do ‘em, help me out a bit,” Lorna Golden said, laughing at the memory. “I was 5 years old, sitting at the table, rolling them,” Rella remembers.

Two decades later, Rella was volunteering at the Love and Unity Christian Fellowship in Compton when she brought a few home-made rolls to church to feed her fellow volunteers in the media department. They were an instant hit. “You should sell these, you could make some money,” she remembers her supervisor saying.

She was reluctant at first. Making a business out of egg rolls? No thanks, she thought. Working as a special education aide with the Bellflower School District and taking community college classes, all while living with her mother in a trailer park in Hawaiian Gardens, she had enough on her plate. 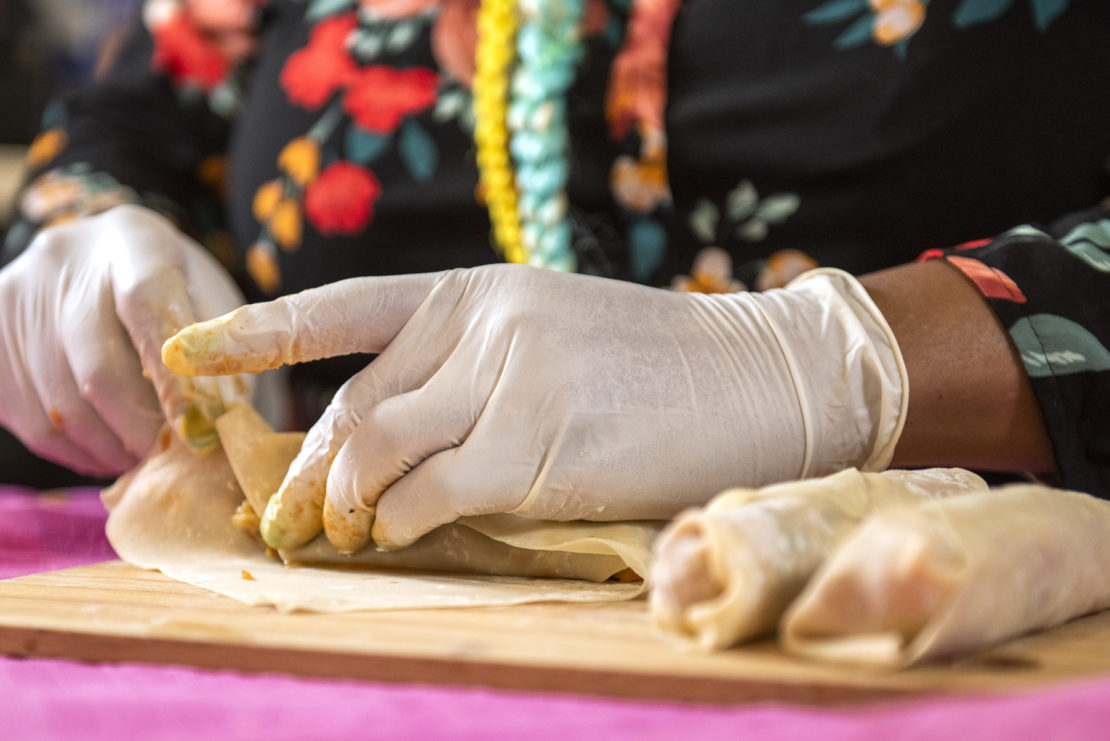 “That was powerful, I couldn’t control my own thoughts,” she remembers thinking. “That’s God.”

She began experimenting with different fillings, teaching herself how to make every single one of them. When she had the idea for her garlic lobster rolls, for example, she realized: She had never even touched a lobster before.

So she bought a lobster tail and began watching YouTube videos to figure out how to break the meat out of its shell. “I didn’t know how long to cook it, nothing,” Golden said. “So I taught myself.”

Customers come to her specifically for her creative fillings. Recording artist Marcus “MaxLux” Boyd is one of Golden’s long-time fans. She’s catered his baby shower, the set of his wife’s TV show, private parties, you name it.

“All you gotta do is put an egg roll in somebody’s mouth and they’re hooked,” he said. “They’re that good.”

His favorite filling: chicken and waffles. “She’s gonna put Roscoe’s out of business,” he joked.

Over the past seven years, Golden has developed over 30 fillings for her rolls, of which she makes and sells two to three dozen per week, taking orders via phone or through her Facebook and Instagram accounts. Gumbo, peach cobbler, pastrami and cheese—no dish is safe from her egg-rolling hands.

At first, her mother Lorna didn’t think the experimental fillings were a good idea. “I thought she was crazy, I said: ‘Girl, you can’t do all that stuff!’” the elder Golden remembers telling her daughter. But the flavors quickly won her over too, and Rella keeps coming up with more.

But first, she needs a bigger fridge, some more countertop space, a larger stove, in short: a professional kitchen. And the dream of having her own storefront, maybe even a food truck to match, finally seems attainable. In February, Golden won $100,000 on CBS’s “The Price Is Right.”

After guessing the correct price for a bottle of ice tea, a box of frozen waffles, Scotch tape and the like, Golden went home with a seed investment in her business and a promise from the producers. “They told me that when I get my food truck, I can bring it onto their lot whenever I want to,” she said.

But first, Golden has to find the right location for her business. Currently, she has her mind set on a former Chinese restaurant in Bixby Knolls. “I gotta start somewhere, you know?” she said.