With its new farm, Heritage aims to pair fine food and an environmental mission • the Hi-lo
- ADVERTISEMENT -

About a mile away from their Rose Park restaurant, Heritage, chef Philip Pretty and his sister Lauren explained to a group of diners last month why the new micro-farm where they were sitting was crucial to the ecosystem that created the five-course meal they were about to eat.

The farm and event space is cozy. String lights illuminate a 30-seat communal dining table. A golden, pinecone-shaped art installation shelters a firepit. What was a barn has been refurbished to hold more seating and an industrial kitchen in the back.

The farm itself is modest—more like a garden. There are four raised plant beds and a small chicken coop. But the Pretty siblings’ plans for the space aren’t modest at all. Come spring, they predict that the farm will supply 60% of their restaurant’s organic and seasonal produce.

“The idea is that we want to make this something special and not be a one-off thing,” Philip said. “I want this to be part of our legacy.”

Heritage, and its accompanying sandwich shop, is already a familiar name in the culinary scene, even receiving a Michelin Plate award from the famed guide last year, but the quality of the food may have actually overshadowed part of the restaurant’s underlying ethos: an aspiration to produce zero waste. 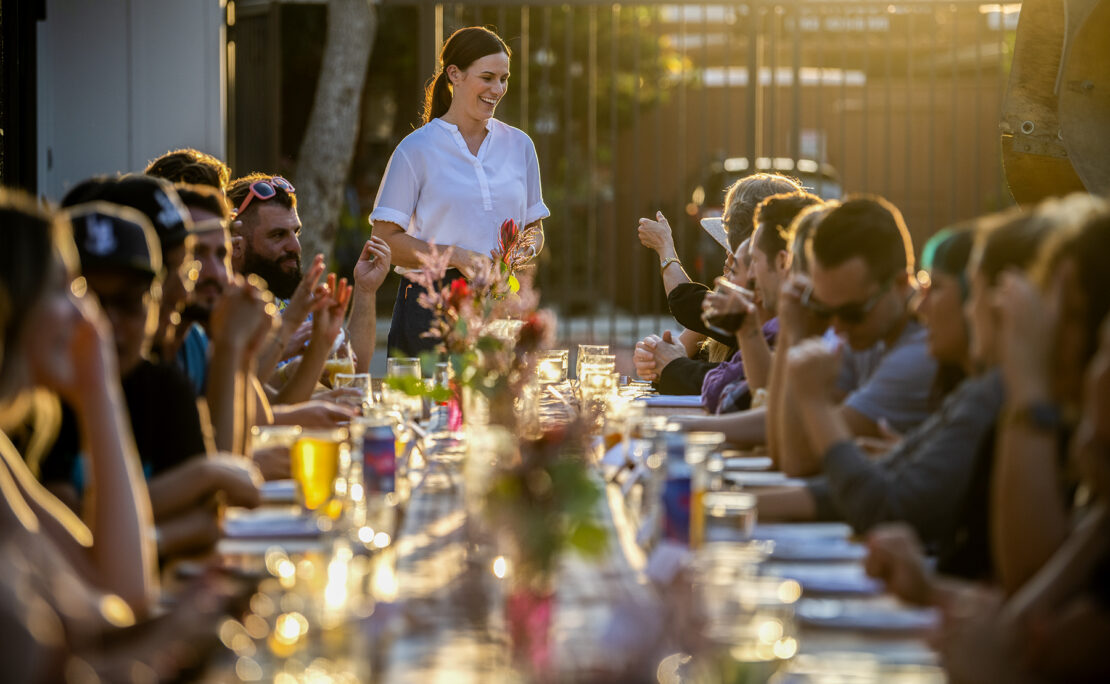 Lauren Pretty talks to gust during a media dinner at Heritage Farm a new urban farm and event space in Long Beach on Wednesday, Aug. 24, 2022. Photo by Thomas R. Cordova.

As a casual diner, it’s possible to miss this guiding principle. It’s not broadcast save for a line on their menu and social media channels, plus a mention of it on their website. But the Prettys have put tremendous thought behind the endeavor and their new farm is one more signal they’re taking the practice seriously.

Heritage already sources its food close to home. Produce is mainly from Santa Monica farmers. Seafood comes from Long Beach. Slabs of brisket and pork belly on its sandwiches are on ciabatta bread and country loafs from Hey Brother Baker in Bellflower. Cheeses are from Oh La Vache in Retro Row.

With Heritage Farm, the company aims to shrink its carbon footprint further.

“The fact that this is going to be grown in Long Beach is huge,” Lauren said. “I cut personally from the garden this morning to take to the restaurant. It doesn’t get any more local than that.” 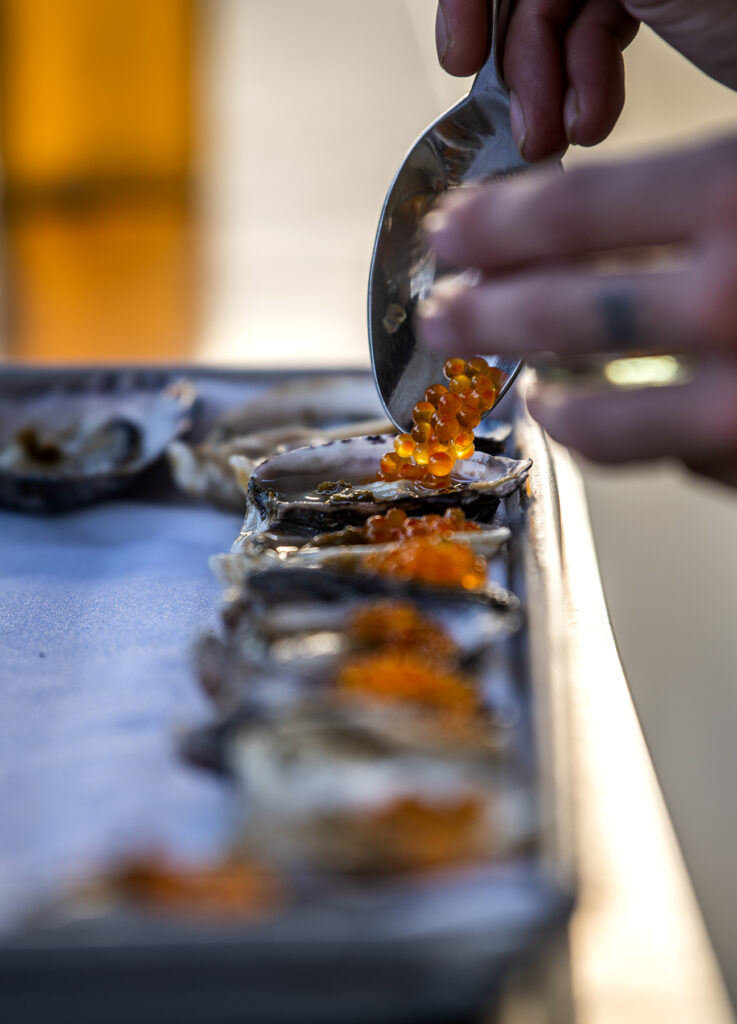 Fish roe is placed on an oyster and seaweed appetizer dish at Heritage Farm during a media dinner on Wednesday, Aug. 24, 2022. Photo by Thomas R. Cordova.

Heritage Farm isn’t large enough to provide high-volume produce such as lettuce, Lauren explained. “Our goal is to grow things we can use as a whole,” she said, such as herbs, fruits and vegetables that reflect the needs of Heritage’s seasonally changing menu.

At the farm, Philip points to a patch of earth that will hold a new yuzu tree. Further down, a kumquat tree they’re transferring from the restaurant will be planted. Another plant bed will soon sprout beets and radishes. All their herbs will be grown in-house.

“We haven’t had to buy basil since we took over the place,” Lauren said. “Eventually the goal is for the whole garden to be sustainable and organic. It’s going to take a little bit to get to that point, but hopefully by spring everything is blooming and every season we’re turning everything over.” 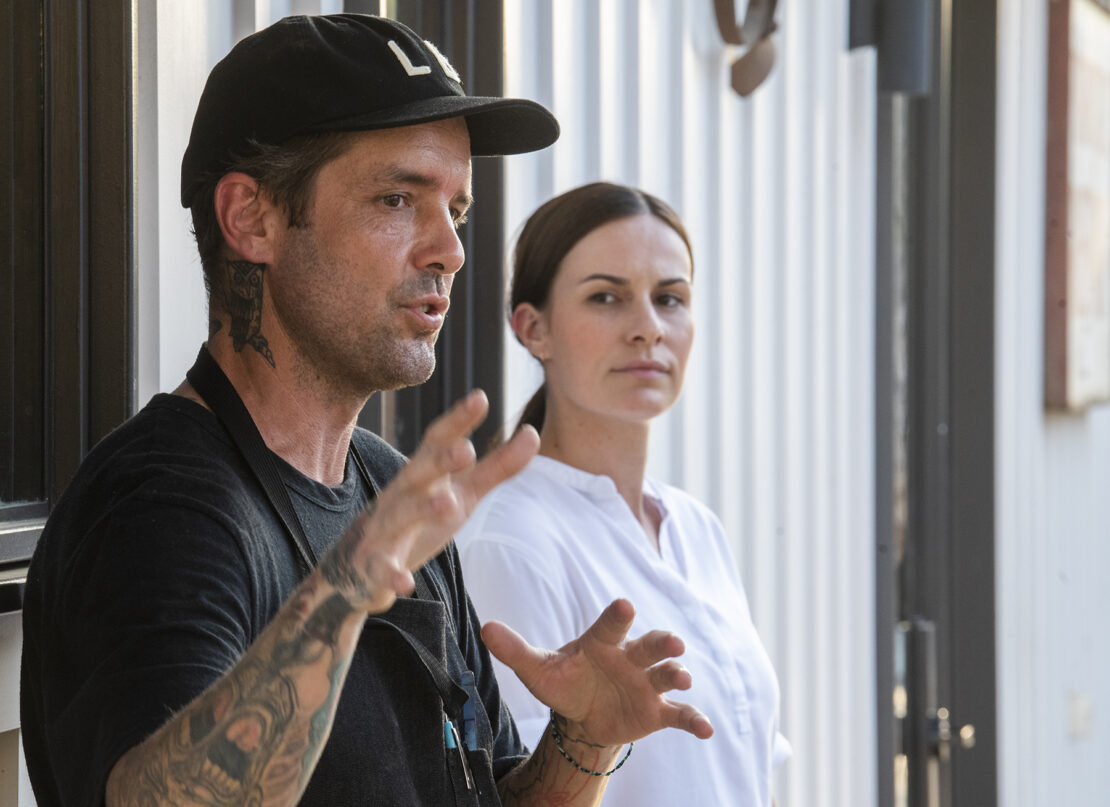 Chef Philip Pretty and his sister Lauren Pretty talk about the food he just served at a media dinner. Photo by Thomas R. Cordova.

The Prettys started Heritage Sandwich Shop in 2020 and its fine-dining counterpart in 2021 with sustainability in mind but opening during the heights of the COVID-19 pandemic slowed their efforts. The restaurant has since achieved blue and green certifications from the city, meaning that Heritage is more water and energy efficient and takes the extra steps to recycle and reduce its waste output.

For instance, Lauren said the bulk of the cleaning products used are certified green products. All the paper products, from bags to napkins to printer paper were made from recycled material. The to-go silverware is compostable. Their trash system is divided between what’s recyclable and compostable, with the rest still going in a traditional trash bin.

“We have people come out and do trash audits on us to make sure we’re not bagging our recyclables and all the trash is being thrown away properly,” she said.

The Heritage system isn’t 100% zero-waste, few restaurants have the means or infrastructure to make eliminating a trash bin possible. But the core of what zero-waste means for the restaurant revolves around the kitchen. 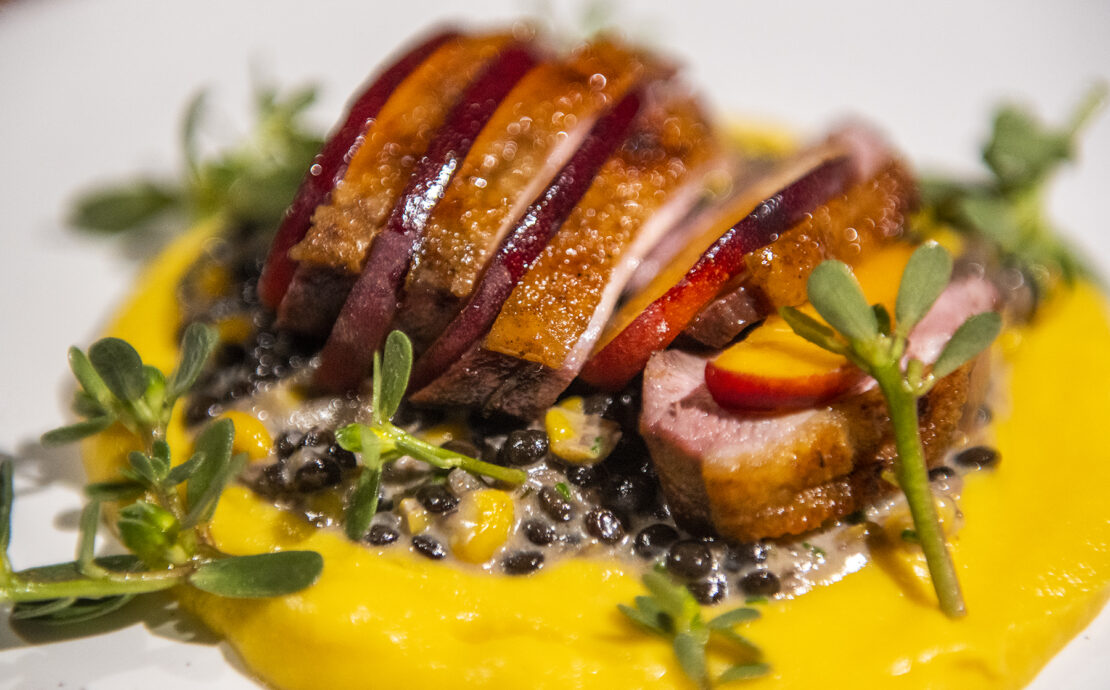 The main course of duck and peach at Heritage Farm for a media dinner on Aug. 24, 2022. Photo by Thomas R. Cordova.

Philip’s prime example is how they use their California-raised Mary’s ducks. The legs are comfit and used in a sandwich for lunch. The duck breast is aged for seven days and served as an entrée for dinner. With the leftover bones, they create a sauce that’s used throughout their menus. Every vegetable, herb and ingredient is used to its max edibility and any scrap goes straight into the compost.

“We’re thoughtful with the menu and we think about the byproduct of everything,” Philip said. “If there is a use for the byproduct, we use it and if there’s not, it goes into the compost if it can. And we’ve done this since jump street.”

Why go to all this effort? Philip’s simple answer: All the waste: “it sucks.”

A 2018 report by ReFED, a nonprofit focused on food waste solutions, found that restaurants in the United States generate about 11.4 million tons of food waste annually. Philip had witnessed the indiscriminate waste firsthand throughout his career at fine-dining establishments across the Southland and it grated at him. Then he discovered waste could be reeled in when he began working at Axe in Venice Beach. 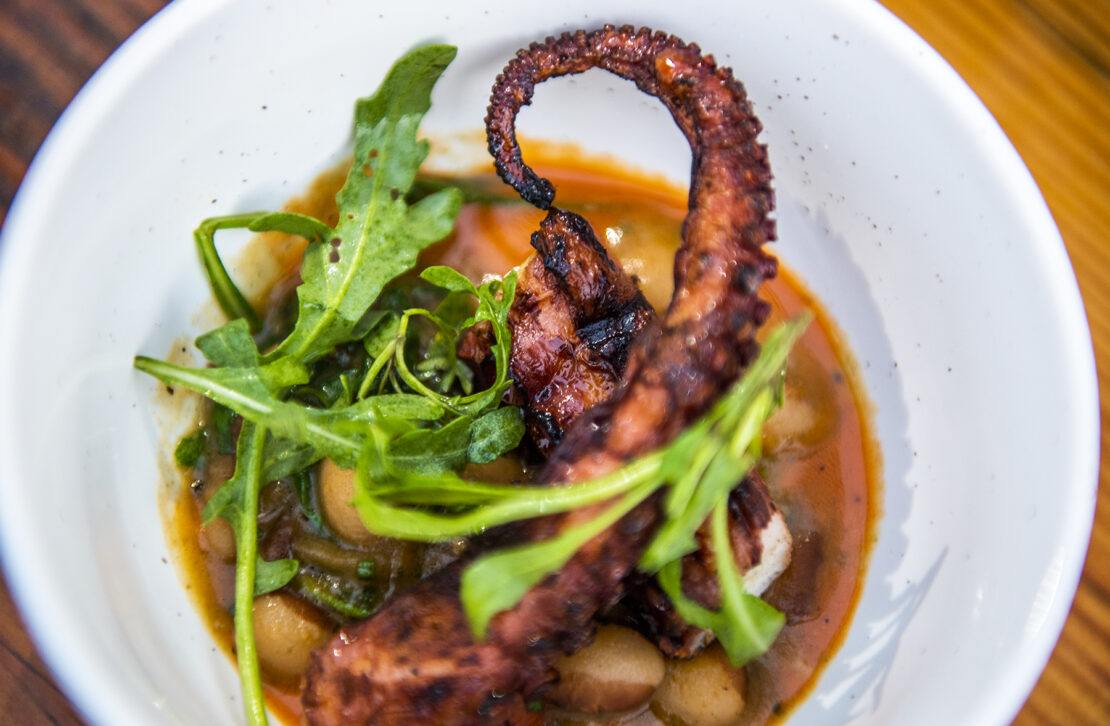 An octopus and beans dish at Heritage Farm. Photo by Thomas R. Cordova.

“They were the only zero-waste, sustainable restaurant that I knew in all of Los Angeles,” Philip said. “I went there and became a chef and I loved everything she (the owner) did, so I just started adapting things my way and getting deeper and deeper into it. From that point on, it’s all I’ve ever preached.”

For Lauren, leaning into the lifestyle hits a little closer to home.

“I think I’ve always been interested in recycling and being mindful of the planet,” she said. “I think a lot of that stemmed from our grandmother, she had a garden and composted. Our mom was always into it as well.”

Maintaining a zero- or even low-waste kitchen poses its challenges, but the Prettys hope to lead by example and taste. To that end, Heritage Farm debuted its Chef Dining Series, which invites local chefs to collaborate on a tasting menu that is experienced at the farm.

The series will conclude Oct. 1. For the final event, Chef Philip and Aaron Melendrez of Uptown Provisions and Boomtown Brewery will present a six-course menu to enjoy. Each dinner begins at 6 p.m. and costs $125 per person. Reservations can be made over the phone at (562) 342-1068 or by email at [email protected]